I’ve decided to down tools for a couple weeks (he says with a wink and a grin) while I wait for some deliveries and campaigns to start.

In the mean time, I been inspired by a few of you, especially @Torsten_Becker to show off some of my older builds. Rather than spamming a bunch of new topics, I’m gonna stash them all here for all who care to take a gander. C&C always welcome.

At the outbreak of the Korean War, Canada’s armoured force was a shell of what it had been barely 5 years before at the end of WWII. Intending initially to equip its forces in Korea with a motley collection of war weary 17pdr Achilles TDs it was quickly decided once in theatre to reequip with new(er) Shermans from US stocks. Canada would purchase 20 M4A3s and simply rotate units and crews through them as they rotated through the theatre. The result being that by the end of the conflict the tanks were almost completely clapped out. 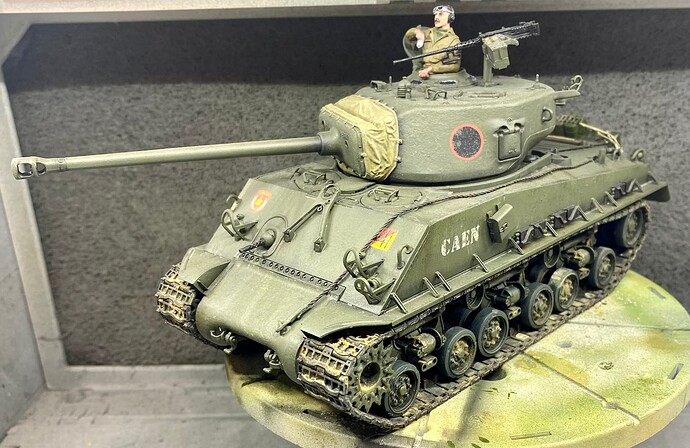 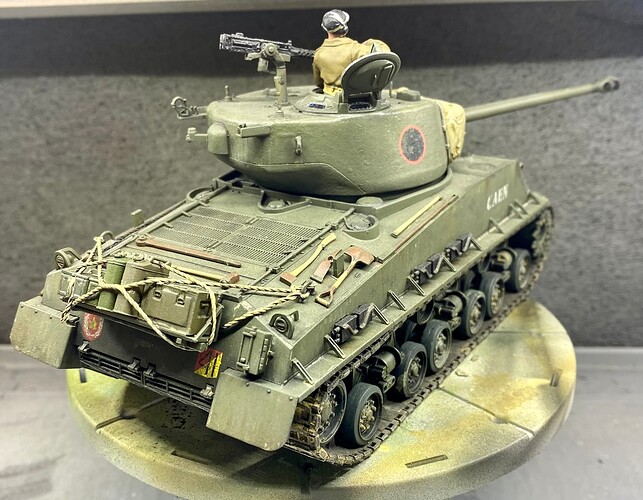 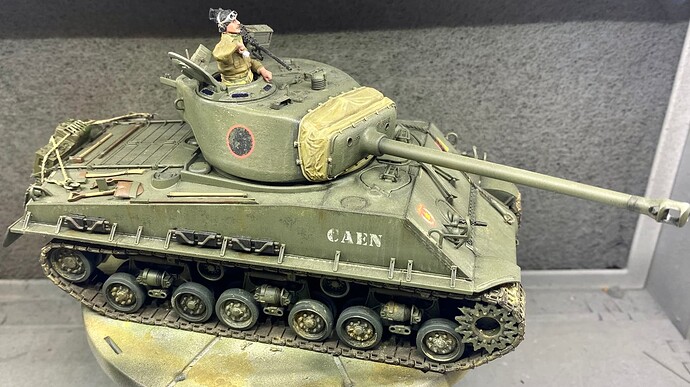 Next up (and in no logical order other than how they get pulled off the shelf) a Priest Kangaroo (the APC, not an ordained marsupial).

The Kangaroo was the brainchild of Lt. Gen. Guy Simmonds. Based on the repurposed hulls of surplus M7 Priest and later Ram and Sherman chassis, the Kangaroo provided the infantry with what is arguably the first true APC of the war. 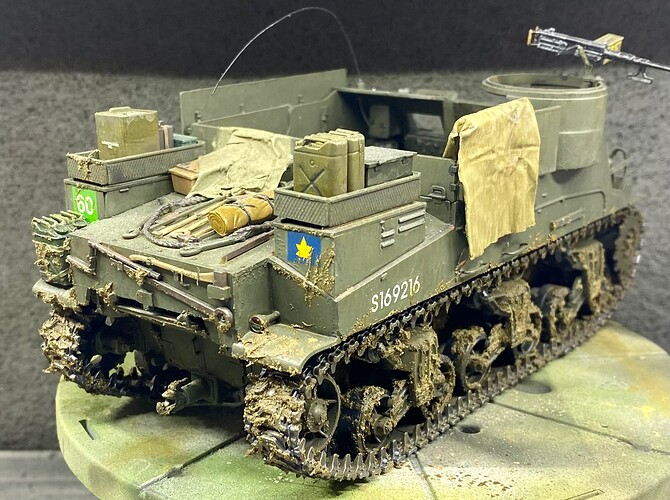 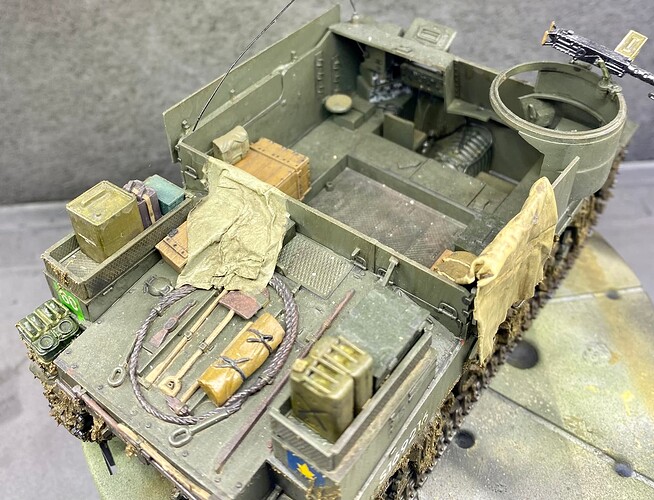 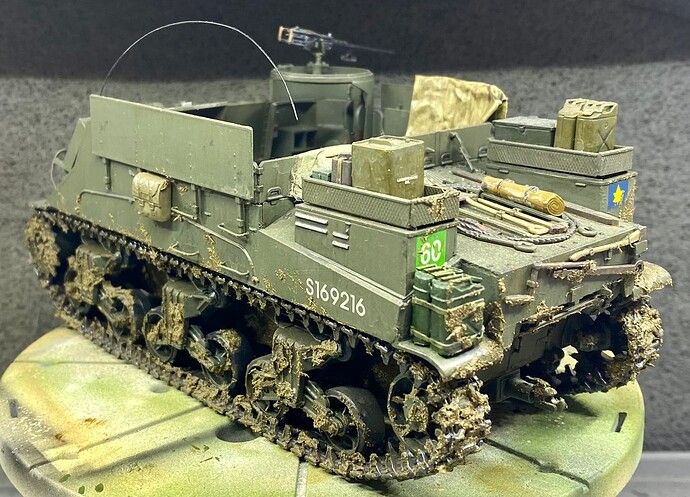 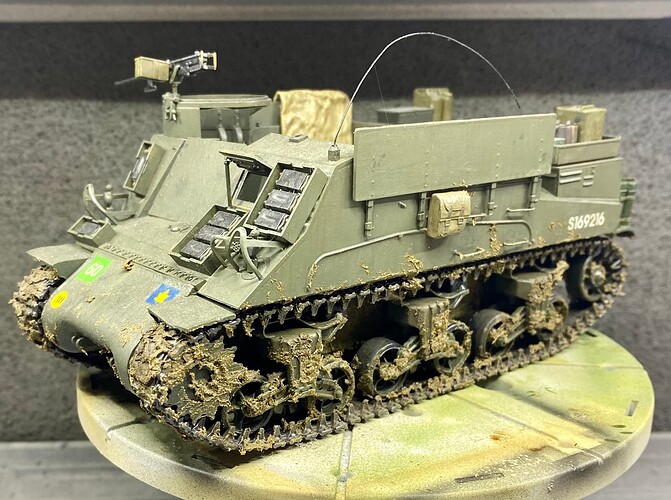 Last up for today, the humble Jeep. Just shy of 650,000 were built during the war. They served on every front with almost all of the allied nations.

This is the Tamiya kit. I built it purely so I’d have something to do with that figure which is from Ultracast. Still the best figure I’ve ever painted. 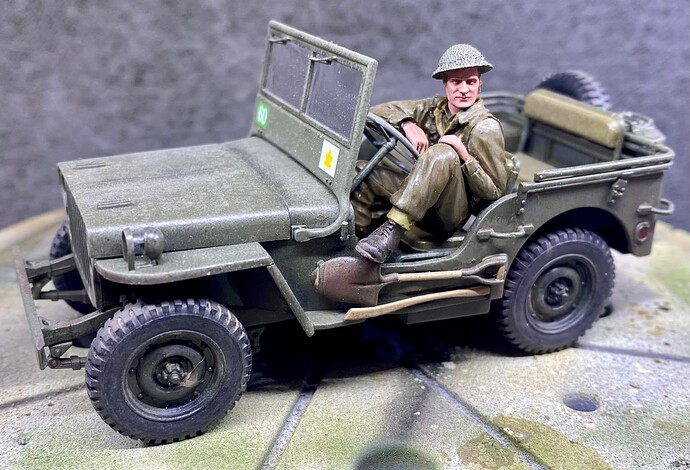 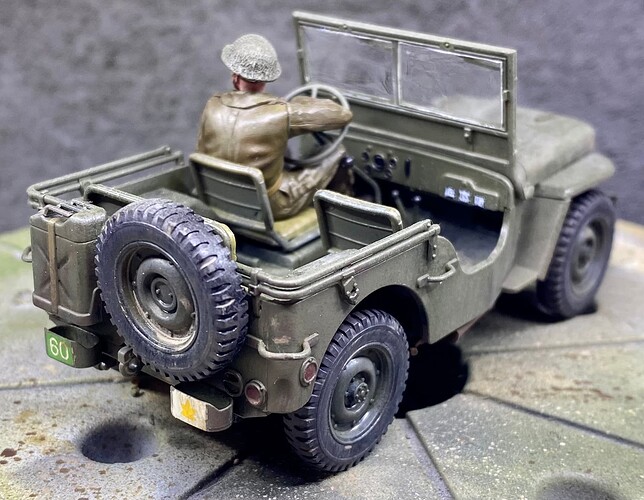 Nice builds Don. I always enjoy looking at what others have done in the past and it’s always good to give them an airing once in a while. Looking forward to seeing some of your others as they appear

Thanks buddy. I feel the same way. I wish I had a better photo setup but the spray booth works well enough I suppose.

Downside is, I start looking at the photos and realize all the goofs I’ve made that the anonymity of the shelf helps to hide.

Built to a 1941 US Army Ordinance specification, the Staghound oddly enough saw service by just about everyone except the Americans.

Used by the Canadians as Corps level Recce assets, this unit is (kind of) marked as belonging to the 1st Armoured Car Rgt (Royal Canadian Dragoons), 1 Canadian Corps.

This model sat mostly built in my stash for close to a decade before I decided to get back into the groove during lockdown. Most of the stowage was already in place and I didn’t feel like prying things off for the sake of a few decals.

Kit is Tamiya. I think the stowage was the Resicast Staghound set. Figure is from Ultracast. 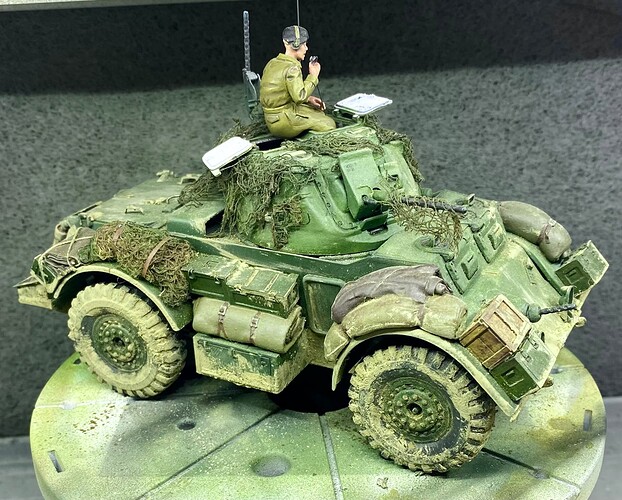 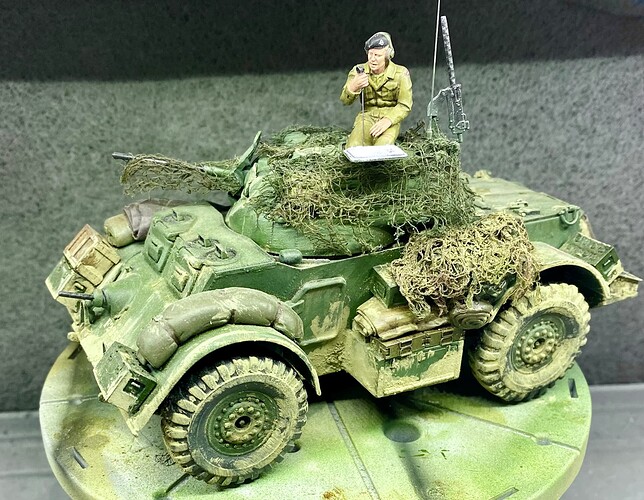 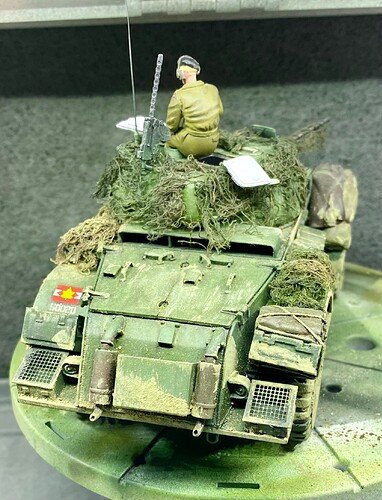 Over 57,000 Bedford QL 3 ton lorrys were built during the war. They served as the basis for a variety of vehicles from GS transporters, prime movers for the equally iconic Bofors gun and in this case, as the QLR radio van.

These trucks were not typically used by Canadian forces as for the most part we relied on various domestically Canadian Military Pattern trucks. I did however come across one documented example in service with the Royal Canadian Signals. No unit markings could be made out in the photo, so I improved this one into the service of 1st Canadian Armoured Brigade.

This truck is begging for a ton of interior details. I’ve left the roof detachable with the intention that one day I’ll go back and give it the love it deserves.

Pay no mind to the horrendous overspray on the windscreen. Obviously my masking was not up to snuff.

Kit is from IBG 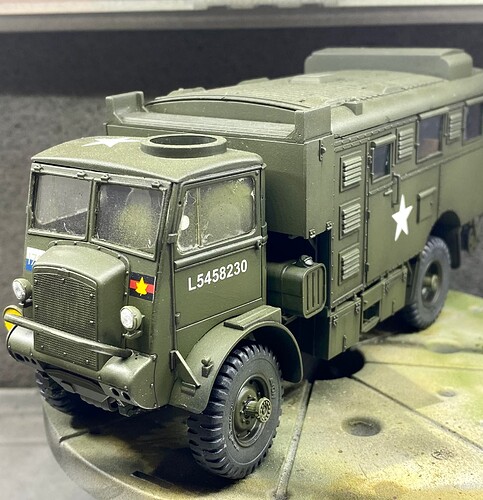 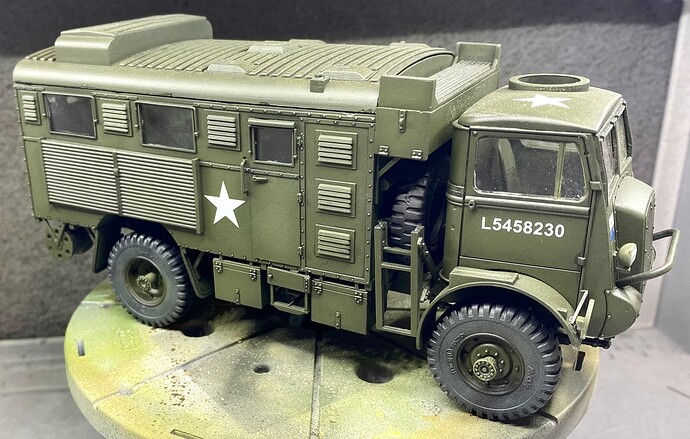 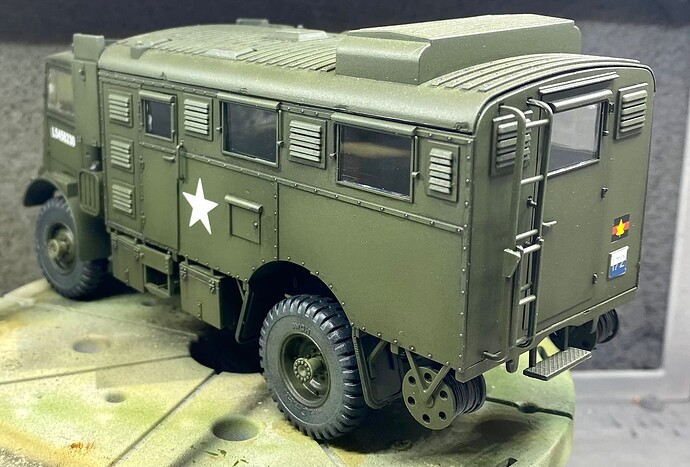 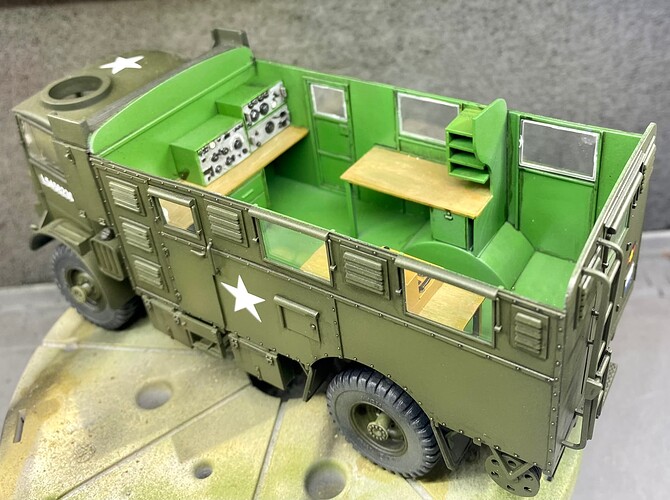 No Jeopardy!™️ knowledge for this one. I grabbed the kit before doing any research and realized it was never used by the Canadians.

Kit is from ICM. 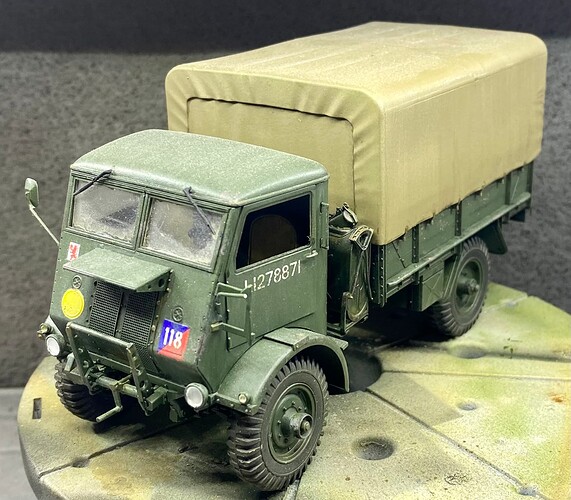 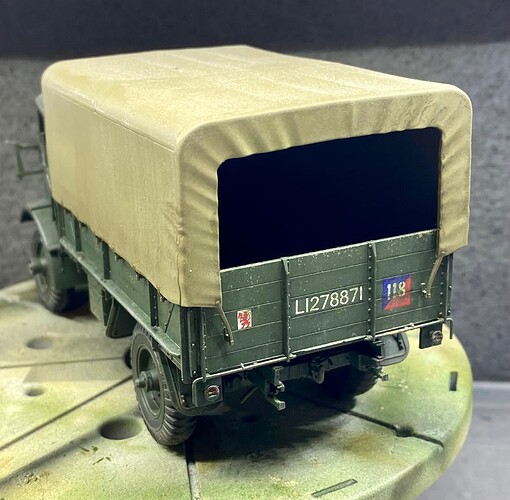 That’s one well-defended spray booth you got there!

And a fine selection of builds too.

I very much like the Bedfords! Priest and Staghound are far too dirty for my taste, but that’s my personal opinion. The Sherman also looks nice.
Thanks for sharing your models with us!

Lovely collection Don- you have really nailed the colors in my opinion- what brand do you use for the green? I was also wondering how the WOT8 was as a kit?

I don’t know what it is about the kit (have the Italeri boxing) that makes that happen. @G-man69 and myself have the same issue just not as long with that kit.

what brand do you use for the green?

All my vehicles are painted with either Tamiya or AK Real Colours. As for what green I used for a specific build, unfortunately I don’t keep very good track.

If you’re asking about the WOT, I know the QLR was AK SSC 15 and I think I painted them around the same time.

The kit it self was great. No issues at all and I have a terrible record with ladder frame chassis builds so that says something.

Thanks for the kind words Torsten. This community really is an inspiration.

I’m pretty sure that was the last kit I started before packing up to move. The new house came with a lack of work space and eventually offspring.

Only good thing to come out of Covid is that I can play again!

Priest and Staghound are far too dirty

I mean yes. That is also an entirely truthful statement.