Whilst hitting my usual ‘figures’ brick wall with my current group build campaign I decided to start a new project to try and regain my mojo,

Back in late 2020 I started, but did not finish, again due to figure-block, a 1/35th scale diorama called ‘Carrier Crossing’ (see image below). 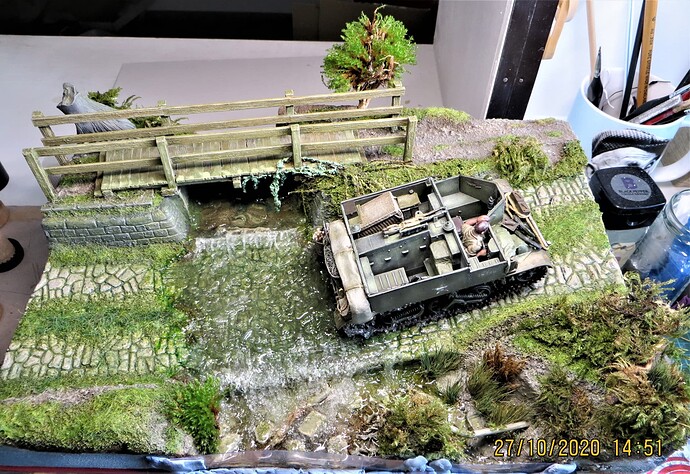 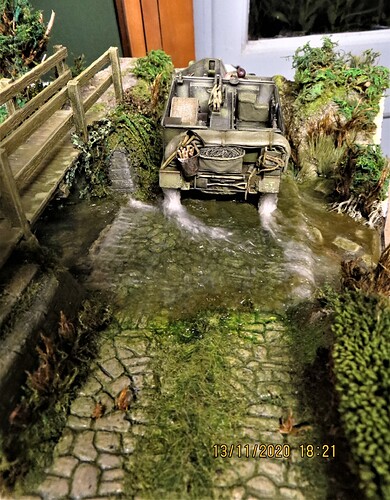 All my builds, irrespective of scale, are limited to a self-imposed base footprint of A4 (8-1/4"x11-3/4" (210x297mm)) due to display/storage limitations. This limits what I’m able to fit in on a given diorama, especially in the larger scales.

The title ‘Carrier Crossing’ is obvious, but the original idea was for a stone ‘packhorse’ type bridge with an adjacent ford, but was difficult to fit, so in the end a timber footbridge was created.

This time I’ve decided to revisit the idea, but in 1/72nd scale, with stone bridge, ford, etc, but using a number of IBG Universal Carriers…smaller can be bigger,

…something I’ve been trying to convince SWMBI (She Who Must Be Ignored) of for over 40yrs,

So today I cut an A4 size sheet of foamboard and 20mm foam sheet and glued them together. 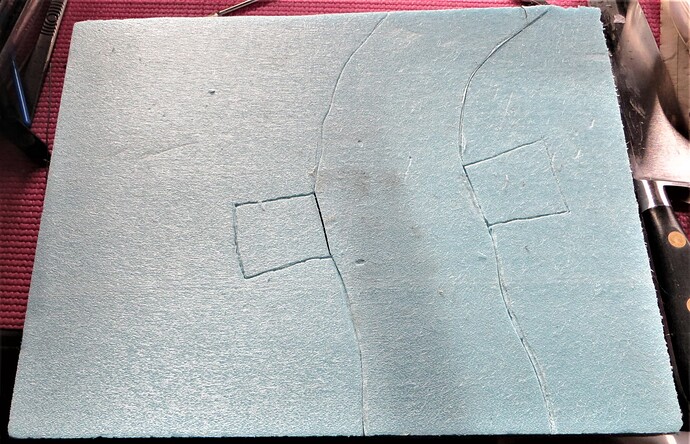 Below is a rough overlaid sketch, not to scale, of what I’m trying to achieve. 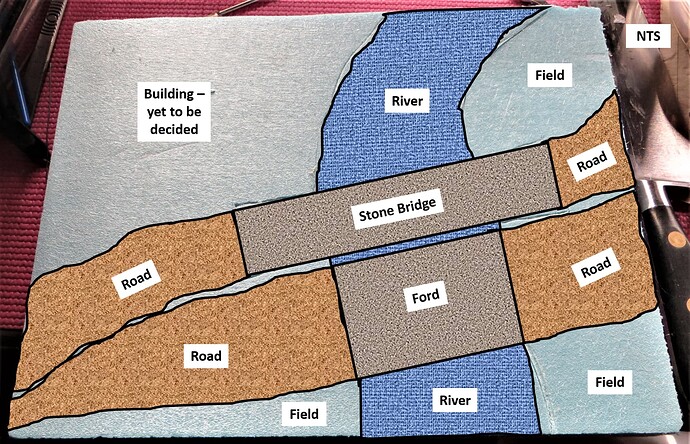 I have also roughly cut out the river banks and added steps to form small waterfalls, the risers to the bridge, the ford and tracks leading down. 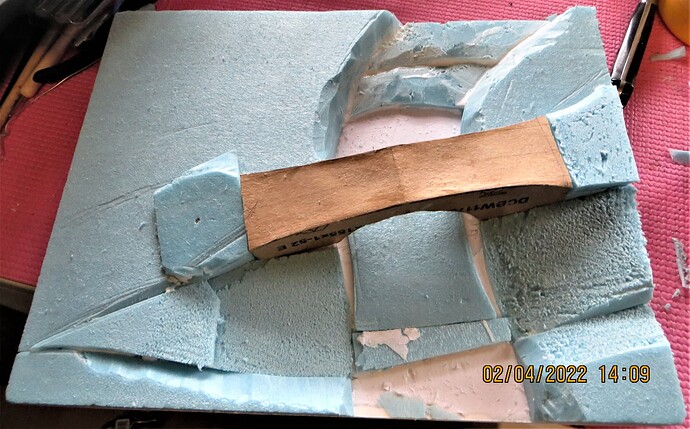 The rough carcass of the bridge is constructed from card that will eventually be coated with DAS ready for the stonework to be scribed.

Next I’ve covered the roads leading up to the bridge, and down to the ford with thin card to give a smooth transition on top of which a skin of DAS will be applied. 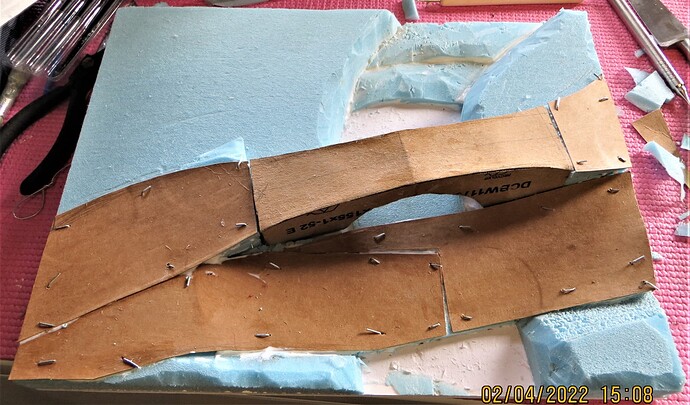 The metal pins will be removed once the glue has set.

Looking forward to it G.

Just a thought:
If the carriers are supposed to be crossing the bridge I could imagine a
broken down or destroyed Panther or Tiger sitting in the middle of the ford.
Alternatively a Sherman going in the same direction as the carriers.

That first dio is beautiful, especially the water. Excited to see Mk 2

The original 1/35 is a fantastic piece- the lush green contrasts nicely with the old, faded stonework but my favourite bit is the way you have the water streaming off the tracks and being pulled back into the flow of the river!

That’s fast work for you !!! Have you taken a leaf out of Erik @DIOWORK book ??

Really glad the original carrier crossing Dio got a reshow, there is some amazing work in that one, and it’s always lovely to see it.

Hey man, that’s looking cool! You have some great space in the left corner in the back.
Maybe there could be a hill, and a house that’s going up the hill. Damn my bad English vocabulary…
You’re so good to make those French/Italian country houses. 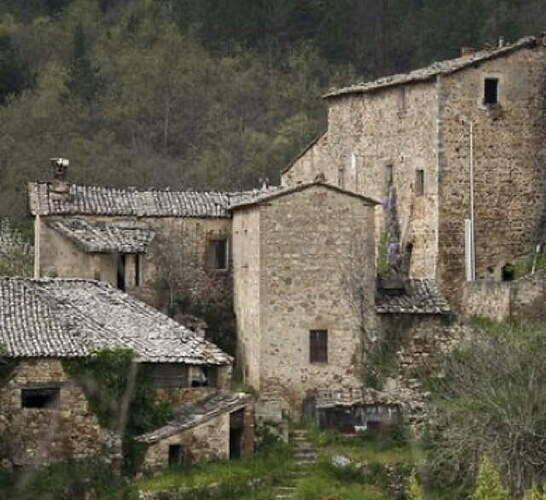 I wish my English was as good as your English…

He does have a point G.

The original looks great, that water… so looking forward to this one

A big thank you to all the positive feedback, especially regarding the original 1/35th scale scene,

. Also thanks for the various suggestions made and challenges laid, all contributions are greatly appreciated.

Nobody is as fast as Erik, he’s the Superman of small dioramas, I bet he wears as blue leotard and red pants under his clothes with a Supermodeller logo on its chest,

. As for downplaying your English vocabulary Erik, I’m with John, your English is excellent, as is Robin’s and Bert’s,

.you all put me to shame,

Whilst I don’t think this one lends itself to a ‘hill house’, Erik has convinced me to try to create a diorama idea that I had been toying with, but was unsure of whether I could pull it off…an Italian mountain village scene, again on an A4 base.

I was struggling to find some inspirational images of a suitable scenario, plus I’m not sure whether to wait until this one is finished, or whether to challenge myself with a side-by-side project,

Finished off the bridge carcass, decided on a low parapet which seemed more in keeping with images of ‘packhorse’ bridges I’d seen online. 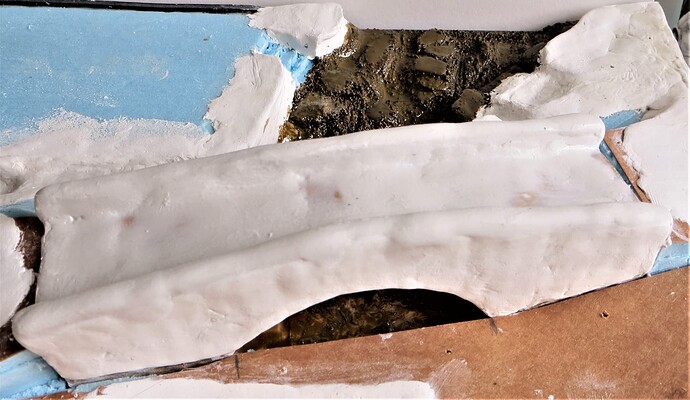 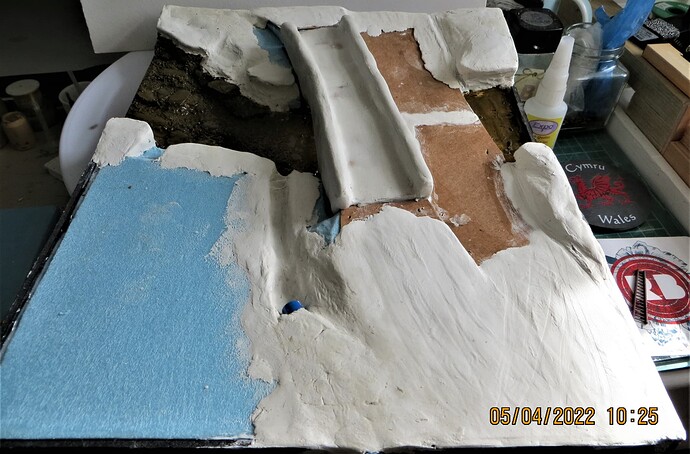 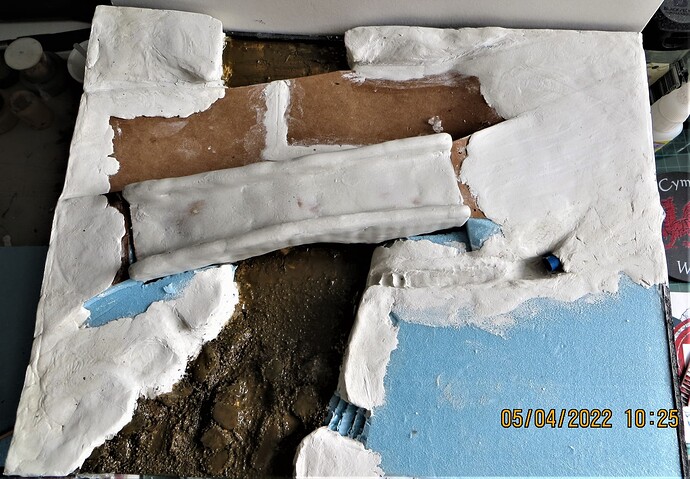 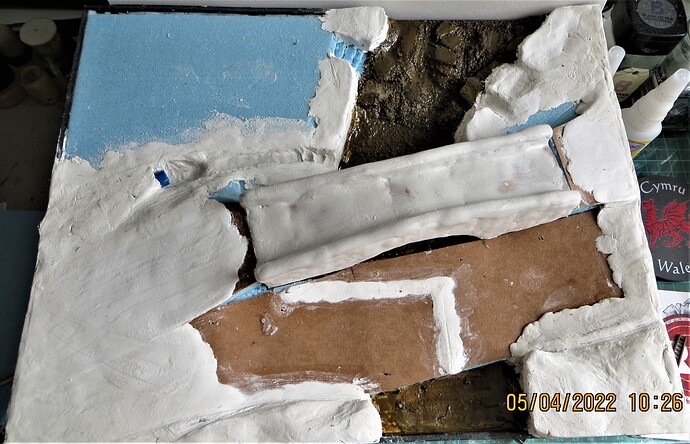 It all looks a bit rough and ready at the moment, but hopefully should look a bit better once I start to clean-up, shape and carve some actual detail,

Slowly slowly G… I would do a bit of research as to the buildings, and put the time in on getting the railway dio finished… It deserves to be done… To go next to the bocage Dio

Please do finish the harbour dio. It would be a pitty if it will be left unfinished!!!

Nice to see you re-visit your original uber kuhl idea albeit in smaller scale. I of course will be following ! It would also be neat to see the 1/35 scale one completed!
J

G, you and me, The Speed Demons Model Club!
Take your time. I think an “Italian hill house diorama” deserves time for research.
I have a really cool idea my self with that scenario. Actually there is an endless amount of opportunities.
Cheers

Erik, your head is an endless conveyor belt of Dio ideas…

Thanks to John and Jerry for their kind words of support, it’s those darn figures that hold me back Jerry,

…though not a problem for you,

I promise to finish of the the quayside diorama Erwin…honest,

lol @ ‘The Speed Demons Model Club’ Erik, though I guess there was no actual definition of the speed, so I could sneak in as ‘slow speed’,

. Maybe a group build for you to start the ball rolling on Erik…WW2 Italian Mountain Diorama,

Managed to roughly scribe the stonework on the downstream side of the packhorse bridge.

Not so happy with the stonework on the right (as viewed), but rather than fill it in and start again, I’ll hide the worst area with some undergrowth,