Amusing Centurion AVRE No 35A035

I have just finished the new Amusing model UK Centurion AVRE. It is more or less out of the box, i used resin Idle whells, from Accurate Armour the coil on its front, and their antenna mount… I have made a extension for the rear part of the "Bazooka skirt " same weith as the extra armour skirt.

More photo of this model on the Campaign site 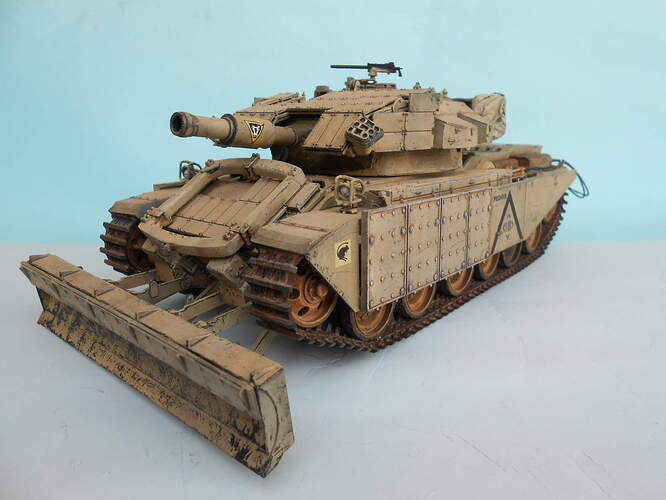 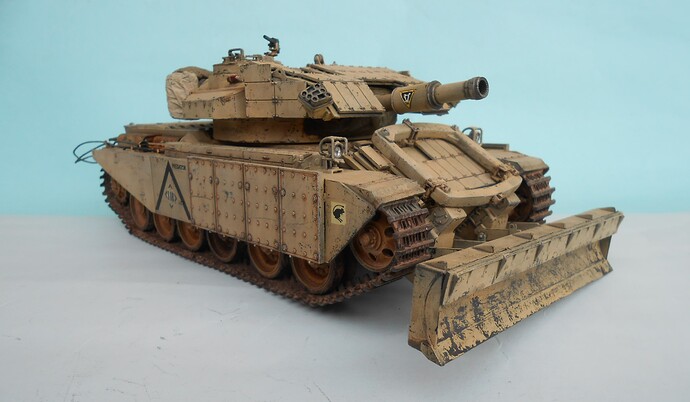 Wow that beast looks great. Love the weathering. Really looks beat up.
How was the kit to build ?

It is my 3rd Amusing Centurion, i have build their gun tank Centurion Mk. 5 earlier.
I like the Amusing Centurion´s better than AFV-Club because of the plastic used in
the Amusing is more like Tamiya quality. The AFV-Club have more details.
I dont think there were any problems with the building of this model, maybe the
instruction was a bit wauge.

I like the Amusing Centurion :
For their single link tracks,
Road wheels are in one piece.
Their plastic is like Tamiya quality.

Dont like Amusing for more or less copying Afv Club parts…
Like Afv Club, they dont provide a mantlet cover.
And uses real shining springs in the tanks suspension.

I dont like Afv Club Centurions for:
Soft rubber band tracks.
Road wheels are 2 part, rubber and plastic glued together.
Some of the Afv Club plastic is very soft,

Excellent job on it. I have the Accurate Armor kit from many years ago, almond forgot; this motivates me to build it. This is what happens when you have to large of a stash, I forget what kits I have lol!

Hey Richard
Thanks a lot.

I have the very old Accurate Armour kit K76, with white-metal wheels, and a lot of the other parts in this metal. my models engine deck, has a deep mis pour, and cannot be used.

Very nice Kjeld - 'may have to get one; no wonder my stash never reduces!

Wow you have built a lot of Cents yes; thanks for pointing out the differences on the two brands of kits, very good to know. My kit of the AA AVRE seems to be in good order, so I’m lucky!
Again great job on your Centurion AVRE!!

Curious if it possible to build a version without all the armor upgrades, maybe from the 1970s. The model is cool and all but it’s hard to see it as a Centurion!

Yes, but you have to scratch build the fascine cradle, AFV-Club will come with the european based Centurion AVRE version later.

Yes, the barrel is in on ‎Piece‎ and rifled.