Some time ago I bought the RFM Challenger 2 TES together with the RFM bar armor upgrade set. In order to look for some reference I than bought the Tankograd Challenger 2 book.

The plan is to build a Challenger 2 similar to the one that is presented there and used in e.g. Basra around 2008 incl the barracuda netting and the bar armour at the rear. However when I look at the armor on the sides their seem to be 2 versions.
1 version is described in the text as Dorchester 2F and seems to have the “older” style armour blocks. The 2nd version seems to have the armour blocks similar to the blocks in the RFM kit and is described as Dorchester 2H.

Can anyone help here with some background and what would be the most logica’s choice as, as far as I can see for the 1st version I would need otter armour blocks eg from Accurate Armour or another donor kit ?!

Last but not least another maybe more short question.
While going through the Tankograd book I noticed another version of the Challenger 2 which was on my to do list but which I forgot; the 2003 Operation Telic version with only the side armour, dust mitigation skirts and Thermal Exhaust Covers.
On this version what would be your advise to take which kit as an accurate basis ?

Thanks all in advance for the help !

Sorry can’t help you with the Basra beast but as for the Operation Telic Chally I built the Tamiya kit and I think it is a very reasonable representation. My build was completely OOB but I’m sure it could be improved with aftermarket bits and bobs. I have also built the non TES RFM Chally and they are very similar in general detail and proportions.

Hello again, I thought I would copy over the first post on my current build from the old place so I can continue on here if the switch happens before I am fully finished. So here it is with single pics of all the progress steps so far with full info on the old place; https://armorama.kitmaker.net/modules.php?op=modload&name=SquawkBox&file=index&req=viewtopic&topic_id=288040&ord=&page=1 Ok so onto a nice simple single colour paint job after the Berlin Brigade shenanigans. Tamiya Challenger 2,…

Side by side with RFM. 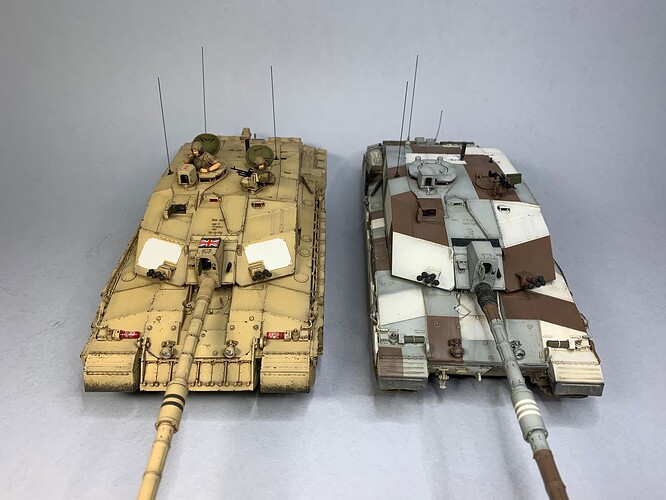