Is anybody on this site able to translate Chinese to English? I’m trying to get in touch with RFM through their ‘missing parts’ order page, but when i try to submit it, this is what i get.

Can you copy and paste the Chinese characters to google translate?

Did you get those messages in Chinese after filling in and submitting this form:
RFM missing parts form (found by Google)

Yes mate, and i can’t copy and paste them to Google Translate either. V frustrating.

Darn, too bad it’s Chinese. Other languages are very easy to copy but google has problems with the symbolic nature of their letters

I may some help because of native kanji user
but its not complete
(as you know Japanese kanji’s meaning is far from Chinese, )

System Warning
The data you want to hand over has the character “悪意(bad meaning)”.
The desired data has been broken
The desired ip:
Operation date:
///////
I presume that there is something inappropriate in the wording. some political words in that country? Hongkong is so sensitivie, now.
Maybe it’s under censorship.

Can you use a google translator the page instead?
http://itools.com/tool/google-translate-web-page-translator

Nothing will help if it’s an image though.

I was able to post the Image URL into the link you gave @Tank_1812 but It was unable to translate it. It was a good idea though.

System warning
The data I want to dike has meaning characters
The data you want has broken records
Thinking ip:
Operation day

Thanks, i guess this is the closest i will get.

RFM do great kits but their customer service is terrible!

I hope this several helps to you.

You cannot contact upper URL and mail-adress?
its right? 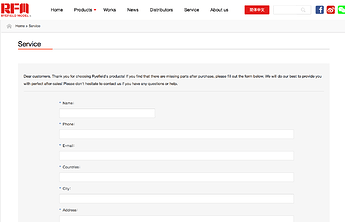 Maybe they just have a downer on dealing with European email. I suppose the UK is still part of Europe geographically.

I can understand your difficulty.
Then it may be practical to contact a representative of the agency.
Does anyone know of the agency companies in Europe or the UK?

Thanks - i finally managed to contact them via their support email address. They have been most helpful actually. They can give no explanation as to why i could not submit the missing part form.

As it turns out, there was no missing part!