This project is turning out to be a difficult one. I’d love to hear your opinions.

It’s become one of those dioramas that’s taken so long, and had so many components (kits, base, figures, etc.) that I’ve almost lost interest.

It all started with ICM’s Sd.Kfz 247 Ausf, B kit. It looked cool and I wanted to star it in a diorama.

After much thought, and a search through my stash, I came up with a plan.

A command conference, between a couple of officers, the senior having arrived in his command car. I’d include a Panther (you can never have too many Panthers) as a secondary component.

I pictured a Spring 1944 scene. I assume that a few of the 247s were still around at that time, well worn, but still used by senior commanders. I decided to do muddy and heavily washed-out winter camouflage on the 247. That was ‘Plan A’.

Based on assorted videos articles and books, I figured I could use the hair-spray technique coupled with washable white paint. To get the look I wanted.

Well, I’m not happy with the result. I’ve had success with the hair-spray technique for worn-paint exposing the underlying primer coat many times in the past, but this time, far too much of the white came off. No idea why.

And I couldn’t seem to get the washable white to work as I wanted, either.

Meanwhile the rest of the diorama progressed along, just fine.

I pulled out a couple of old figures that, with replacement heads, looked really good. On the senior officer in the jacket, I used Citadel’s new Contrast paint to achieve the worn leather look.

I decided to place them on the back deck of a tank, and as a Panther lover I pulled one of those out and put it together.

I had the laser-cut building in my stash so I put that together for a background. Where better to hide a Panther and a conference? 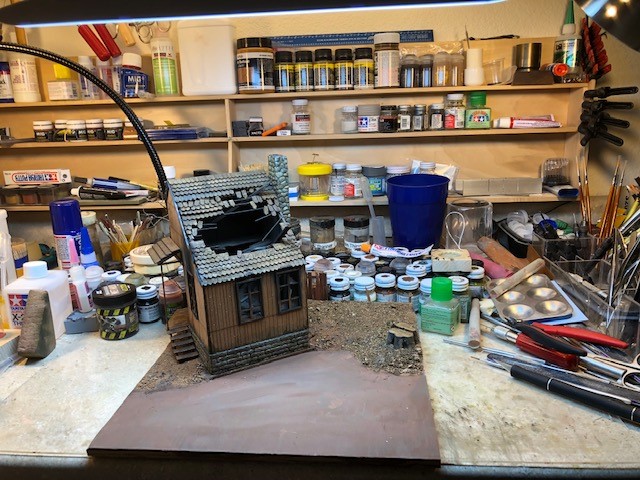 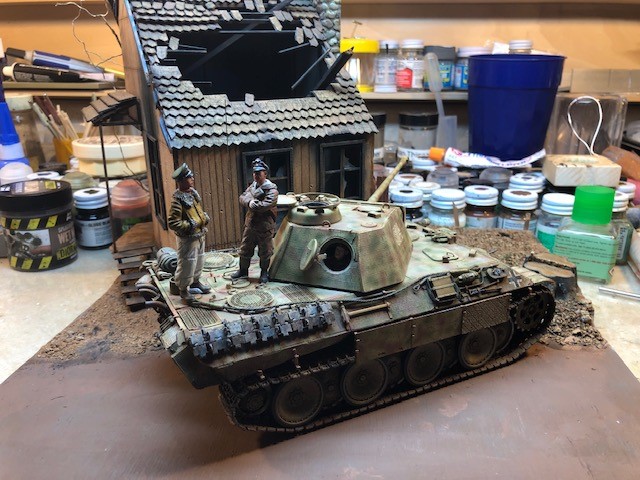 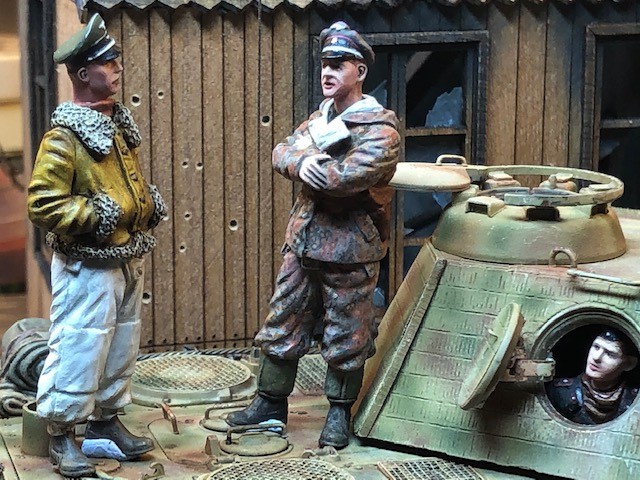 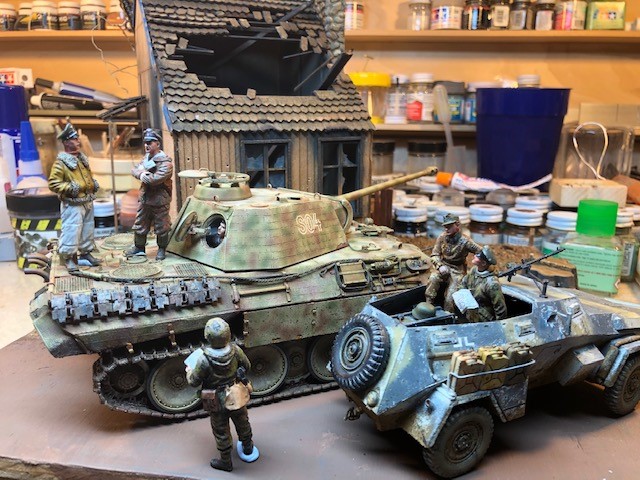 Here’s where I started to get nervous. It was all coming together, except
for the original star of the show! 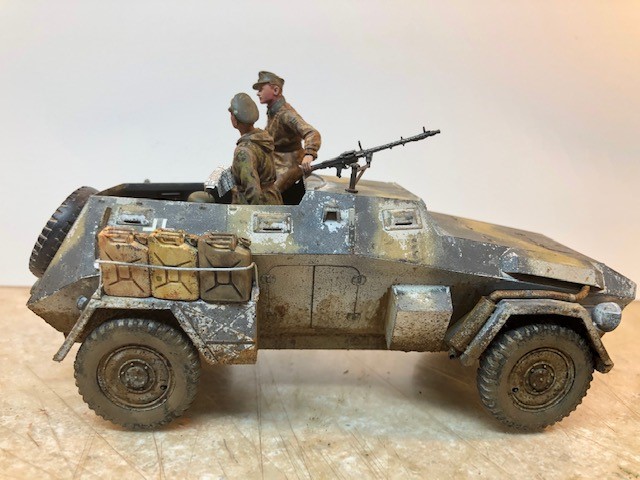 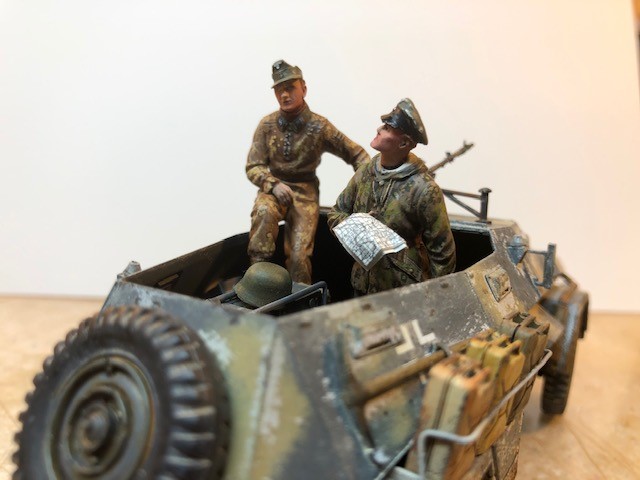 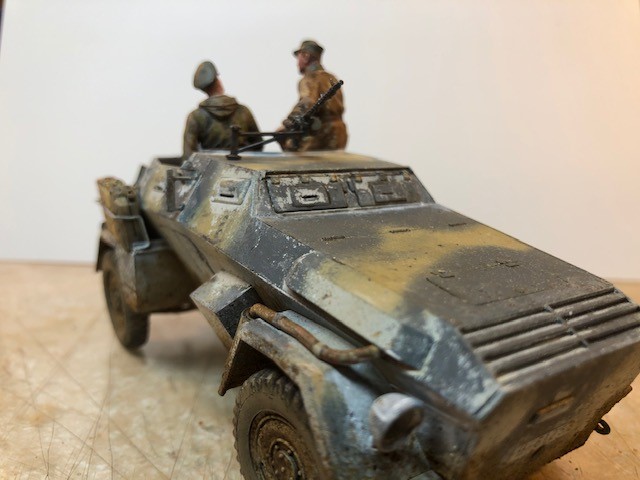 The faded winter camo just doesn’t look right to me. What do you think?

Unhappy, I came up with ‘Plan B’ – The commander arrived in a Schwimmwagen, with an escort, in a second Schwimmwagen. It can be fun to build two identical kits, just to work on making them look unique. 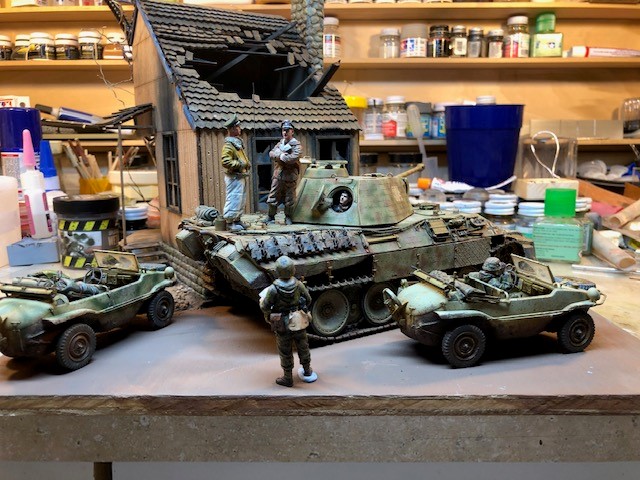 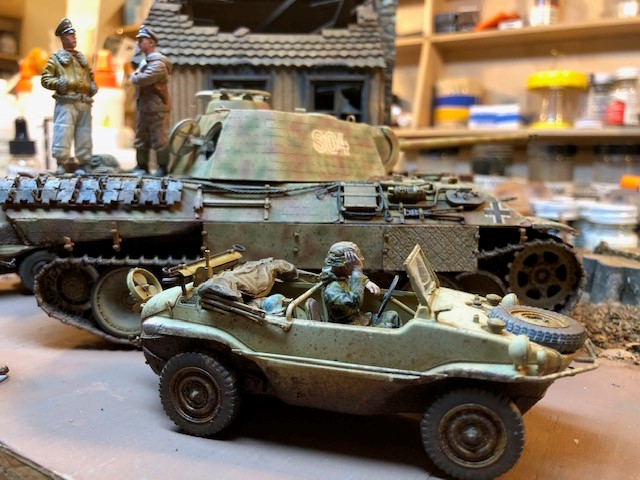 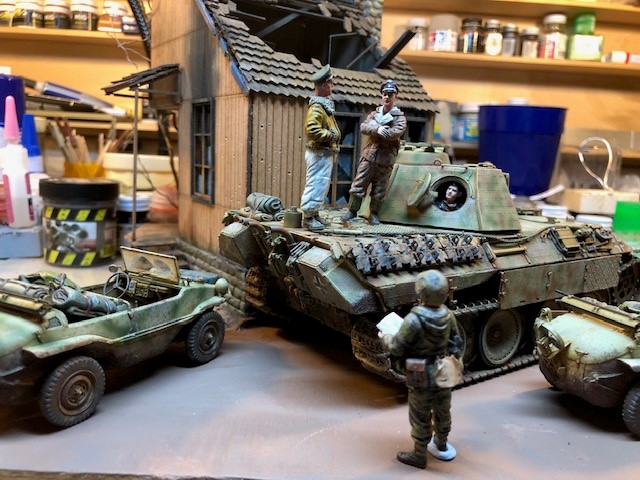 So that’s the background for this project. I still have a lot of work to do on the vehicles and the base. And a lot of mud to add. I’ll post updates as I finish it up.

Now the big question:. Which way should I take this diorama? Use the 247 or the pair of Schwimmwagens as the transport for the commander?

Should I rework the 247? How would you suggest I improve its finish to achieve that washed out winter camo look?

BTW: See you at the IPMS Nationals in Las Vegas – I hope.

Details:
The 247 is the ICM kit. I found it fiddly and the instructions poor. But as a unique vehicle it was OK.

The Panther is an excellent kit from Das Werk/Takom, with Meng Zimmerit decals. I still miss the old Cavalier Zim panels. Much better than decals, PE or putty (IMHO).

The command figures are from Warriors - I love the guy in the leather Jacket!

The two Schwimmwagens are from Tamiya.

The building is from some Chinese company (I think) that I stumbled across on Amazon. It’s no longer available. It’s pretty good, but the instructions were literally illegible. It came complete and pristine – I added all the fire damage.

Love this plan Ralph… I actually prefer the 247, and how it looks. It makes the scene a bit different, and no one can disprove one wasn’t in use during that period…
The crewman looking through the rear turret hatch is a nice touch as well… The Comd figures are very good I gotta say…
You could probably get away with one of the schwimmwagens in the scene as well… It wouldn’t overcrowd it…
That and the building… Got the makings of a great Dio…well done

Your figs and vehicles are very cool btw …

I think the whitewash on the 247 is good as it is.
There isn’t any rule about how much white must remain from a washed out winter camo.
Maybe it is the remnants from the winter of 1943-44, maybe the commander of the 247 ordered it to be scrubbed off as much as possible to avoid becoming a target when the spring comes …

The really washed out look fits better with the Panther anyway.

I agree with Robin. The whitewash looks good! I was wondering why you didn’t like it? Although I do hafta say I am not in the camp of “one may have still been around” in 1944. Possible but very unlikely.
Having said that,it is your show and you are the casting director. If you decide"the kid stays in the pic-cha" then he stays!
The figgies looks good and it’s nice to see some out of the usual ones that everybody is using nowadays,
J

I sometimes think it’s too easy to be overly self critical of ones own work, however, imho, I think you have the makings of a great diorama. The vehicles are well executed, I attempted some worn snow camouflage on a Churchill, and found it difficult, but I think you’ve done a great job.

The figures are well rendered, and I really like the building and, personally, I’d stick with 247, after all it was your original ‘star’, and then you have a couple of finished Schwimmwagens for another project,

Well, it seems to be unanimous, so I’ll finish this diorama, with the 247. I may spend some more time on it’s finish, and of course both it and the Panther need to be ‘mudded in’ to the roadbed.

Thanks for all of the comments. I appreciate it, as always.

Jerry, I too am unsure, but ICM’s kit instructions include a painting profile for a 247 purportedly in use in ‘France Summer, 1944’. I know that if I was a senior SS officer, and I had one of the few remaining, very cool 247s to zip around in, I’d hold onto it.

Anyone interested in a couple of used Schwimwagens available for cheap?

I’ll update this post with photos of the finished product, in a few weeks.

@Bravo36 Absolutely stay with the 247, a unique vehicle, and not seen that much in dioramas. As you said the instructions call for a Normandy 1944 color scheme, so why not use that and make the Panther as one of the Normandy Panthers. The Schwimwaggen was used in dioramas too much now. I will also suggest using the commanders on the ground, maybe with a table of maps and a mg position nearby.
Which ever you decide its your show and I hope to see it completed 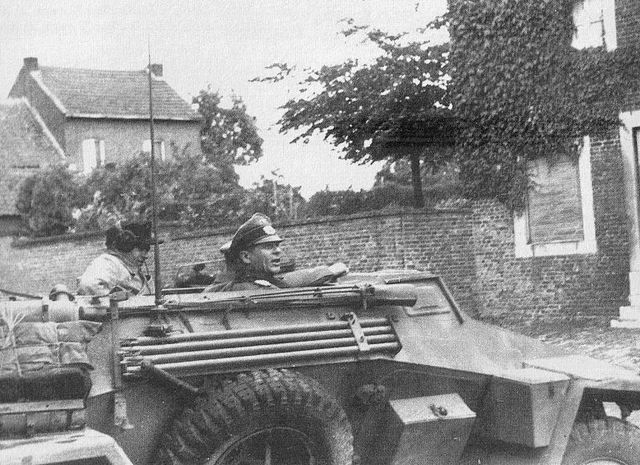 Yeah man! I’ll take those 2 swimmers off your hands!
J

I’m not sure they’re up to your standards, Jerry.
There yours if we can figure out how to get them to you (in one piece)

Wrap them in bubble wrap and put’em in a box. I’ll pay for shipping. It will save me time from having to build them. I need 3 or 4 for an upcoming scene.
J

Got your package yesterday man! You are a scholar and a gentleman. They are well built and will be a welcome addition in a soon to be built scene!
J

Well folks, I finished this project.

The setting: In the Spring of 1944, on the Russian Front, the Regimental commander stops buy to meet up with a Panzer Battalion leader and a supporting Infantry leader. The Russians are coming…

Based on your recommendations, I kept the Sd.Kfz 247 as the commander’s ride, pretty much as it was, just adding a bit more mud to better merge it into the base.

So here is the finished product.

The background building’s roof seemed too much of an empty expanse, so I added some poor private, tasked by his boss to ‘take a look’. 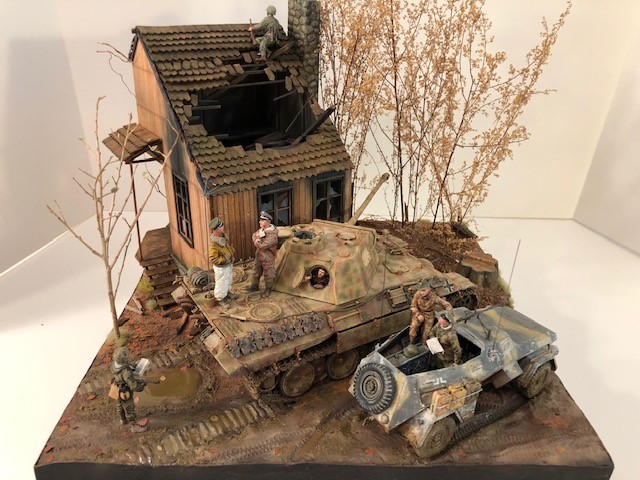 Of course, I also added a lot of other details to the base, to complete the picture. 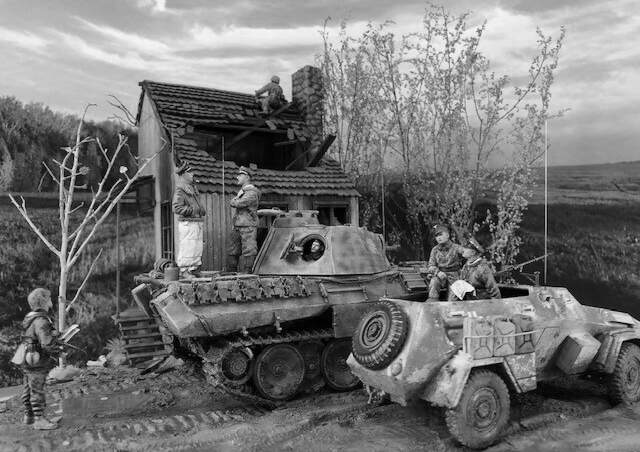 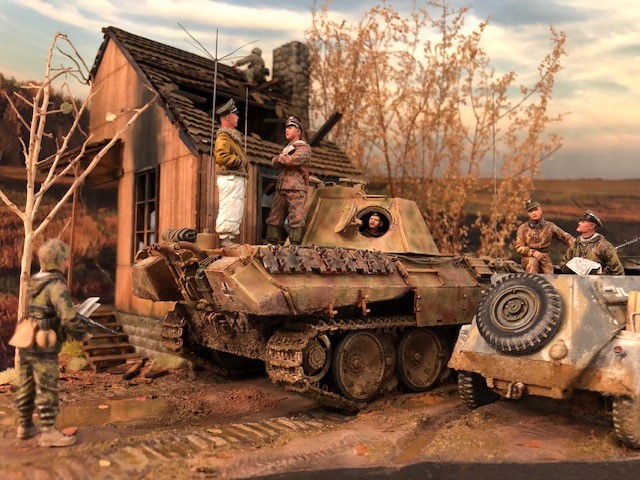 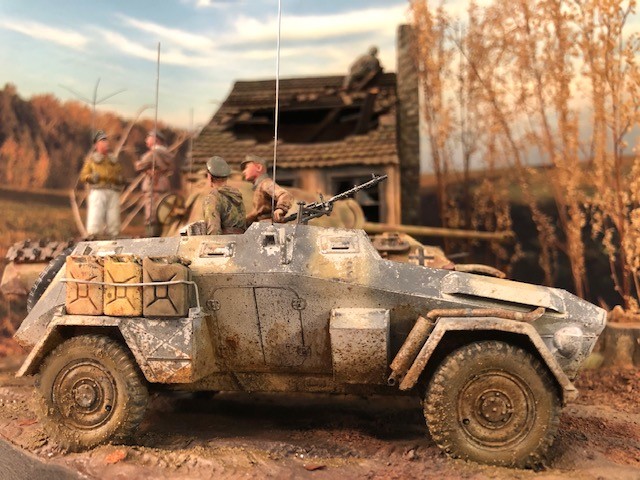 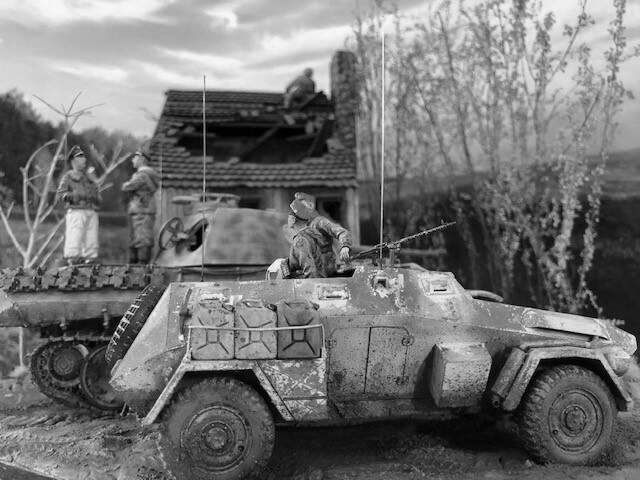 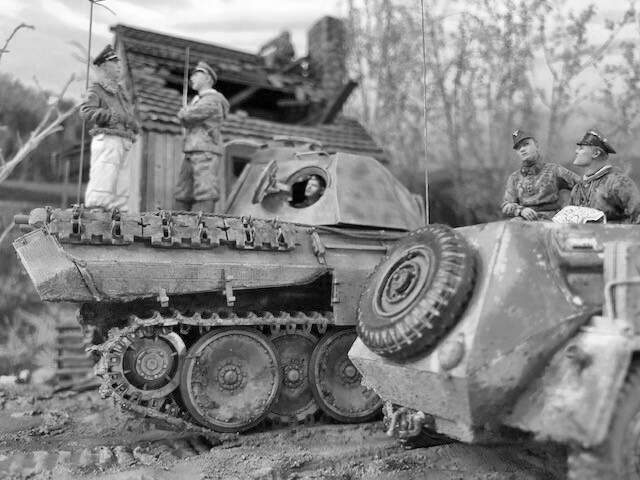 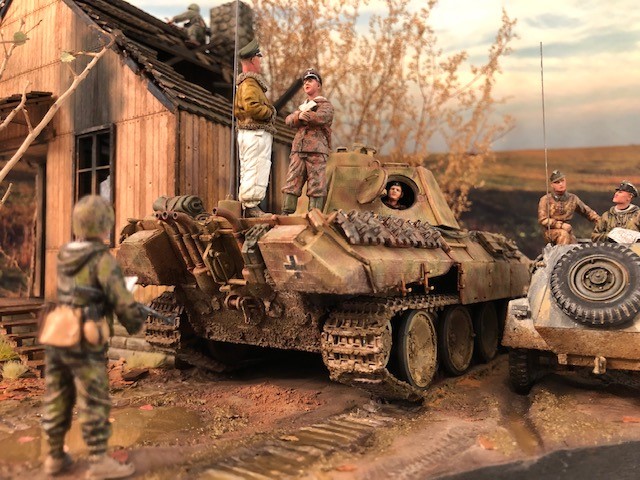 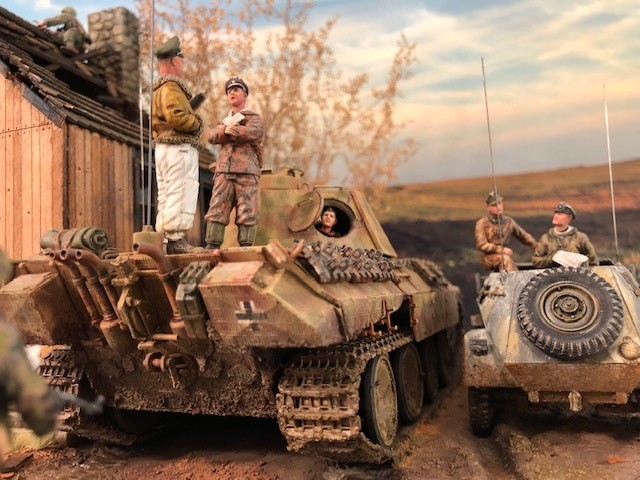 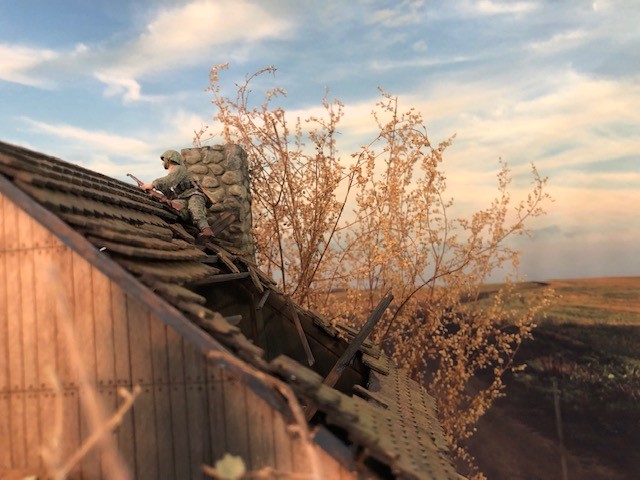 “Sure, go up and have a look, he says. Easy for him to say.” The unlucky private grumbled.

I do like the dioramas where the viewer’s focus is the same as the depicted vehicles and figures – looking over their shoulders, as it were, toward the enemy. But the problem there, is that you then wind up looking at a lot of backs - not the figure’s faces (that we spend a lot of time on.)

At least on this scene, I was able to show a lot of profiles…

This was my first attempt at depicting water using 2-part resin (Envirotex Lite, Pour-on). My first attempt was a dismal failure – almost ruining the base, as I measured out the two quantities by weight, rather than by volume. Apparently, that’s not viable, as I wound up with too little hardener – and it never dried!

I had to clean it all off with Acetone and then try again. The second attempt worked, Thank God.

For the Photos, I use a poster with a photographic landscape for the background. I think it ads a lot to the pics, and I don’t have to play with PhotoShop.

I’m pretty happy with the way it all came together.

I don’t know about you, but when I tackle a single project like this one, with two full kits, a building, a half-dozen figures, and an elaborate base, I start to get a bit tired, or is it bored, with it all and begin to lose interest and slow down.

In this case, I’ve already started on the kits for my next project. Two more tanks and another building, and a lot of figures. So now my work space is again crowded with components, making it even harder to get any work done. ARG!

(Not really work – you know what I mean…)

Hope you enjoy this one. As always, all comments and questions are welcome.

Nicely done man , beautiful , and yes the 247 was a nicer choice than the two schwimmies .

You made the right choice with the 247 it adds nice visual impact. The worn white wash is right on the mark in my opinion.

Thank you for sharing the 247 picture. I was trying to figure out how to mark my 247 and have zero references. It will be 116th Panzer Gray Hound Division now

I really like how this has turned out. The water is excellent and the way you have it pooling in the tyre and tank treads is well observed. The photo backdrop adds to the autumnal (I assume) scenery and is pitch perfect. The figures are all masterfully painted and posed/interacting well. The house backdrop is a lovely piece of work all on its own- especially the burn and roof damage. I particularly like the guy clambering up there to take a look from the high vantage point. My favourite thing is the way you have tied the vehicles into the dirt and mud on the base- it looks completely natural.

I get what you are saying about getting bored and losing interest in a long and busy build but you should be extremely proud of this work and even though it might have been a slog it has turned out brilliant.

it’s a wonderful work, with a lot of details to see and search for.

I have one little remarks, but that’s just ant f***ing.
The guy after the Phanter floats above the mud, it’s a really very very small issue but it was the first thing what struck me