I was considering building a Croatian T_34/85 from the early 90s and was wondering if any of the new Miniart kits might work, at least as a starting point. I don’t know much about T-34 variants. Star Decals lists them as T-34/85M, but wasn’t sure if any of the Miniart postwar kits might work. Or maybe the Rye Field Chinese Volunteer version? I would like to avoid the old Dragon T-34/85M kit if possible. Thanks. 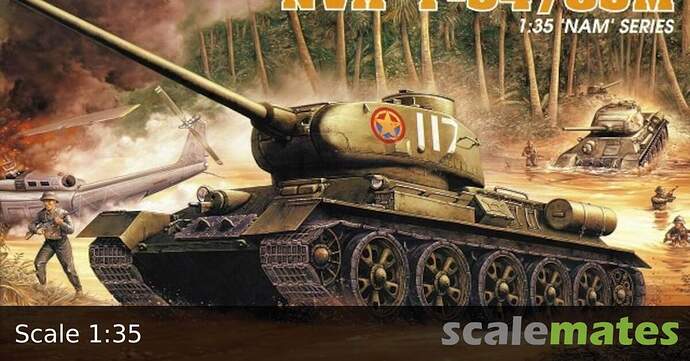 The other mostly will work but this kit has all the M1960 parts that you need in one box.

If I were to kit bash it with a newer kit, di you know which one would be the best to use?

I’d just use the Dragon kit if I had it.

Thanks, I do indeed have it. Saves me some money.

I am not expert about T 34/85 used in Croatia.
Based upon photos I can conclude that so caled sea star wheels from T 55 were used, front fenders were square, not round one and Browning MG mounted on turret.
I am planning Croatian version, most likely based on zvezda kit since I have lot of leftover in my spare box, such as T 55 wheels from Tamiya etc.

I have been looking online for a bit while trying to learn about all the T-34 variants. I’m now not sure all the Croatian T-34s were T-34/85Ms. I’ve seen ones with step joint turret, some with the Angled turret. I’ve found a couple that look to be from factory 112. I’ve also seen ones with the Spider wheels and ones with the Sea Star wheels, too

Ah-ha! This means that you can build a few different variants

That’s bad news for my wallet.

The 55 style road wheels are actually for the 34 and just look like the type used on the 55.

Thanks. I see those on some of the T-34s but the full spider ones seem more common. One had a bit of both of them on them

I shall wait Miniart, maybe they are planning for croatian version.

That’s my hope. In the interim, I got the AFV Club Factory 174 kit and ordered the full spider wheels and enlarged cupola from Panzer art.

When I look at the pictures in the books I have about the war in the former Yugoslavia I see more pictures of Croatian T-34/85 with the Star fish wheels, although some also had the spider wheels as previously mentioned.
If you google for Croatian t-34 you get a good overview of the different types of wheels as well as the interesting camouflage patterns that were used. (Mostly freely improvised by the people that used the tanks).

For reference about the different wheels the following site might be helpful
http://www.clubhyper.com/reference/t3485bg_2.html

All those camo schemes were unusual not to say strange.
Ex Jugoslav army colour was SMB which is grey olive which closest colour match is Revel enamel 362.
Captured vehicles were often sprayed in field using cans, for example during the war my father bought a few cans of green and brown spray in order to paint catuptured truck

I don’t know where Miniarm came up with that silly Sea Star name, they’ve always been know as Starfish wheels. The ones used on the T-34/85 and the T-55 are not the same. Miniart does make a set of the proper wheels. MIA37033 1:35 MiniArt T-34/85 Sea Star Wheels Set

A lot of variety in Balkan T-34s. This Serbian example looks like it has a mix of the spider and pressed wheels 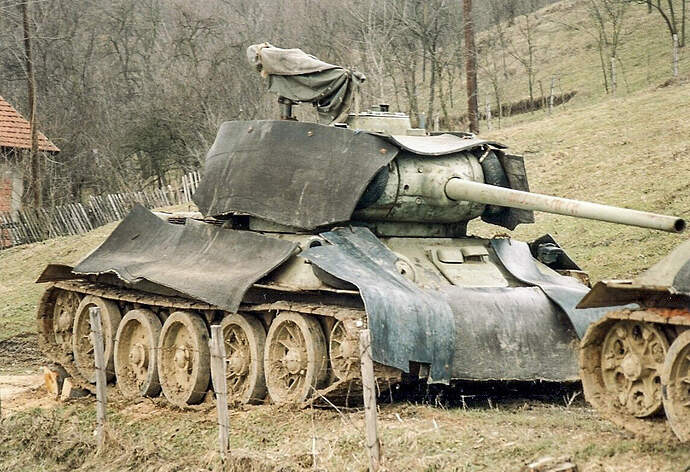 Yes, they used whatever was available to keep their armor and other vehicles/weapons in business.

I also like the improvised armored vehicles they made from regular Trucks. They often looked like big metal moving boxes.