Hi all. Here is the new project. Das Werk PzKpfwg. VI Ausf.B Tiger II. Basically the Takom kit without the interior. I’m going for out of box build as usual and attempting my first winter camo’, as depicted in the instructions.

A bit of a bargain at £29.00 Sterling! Was thinking of removing a couple of sections of the track guards but will need to look into that. And I may, just may, look at some workable tracks, as my only upgrade.!

As you can see already made a start. All looks nice so far, slight warping on upper hull but should straighten out with addition of the rest of the structure. 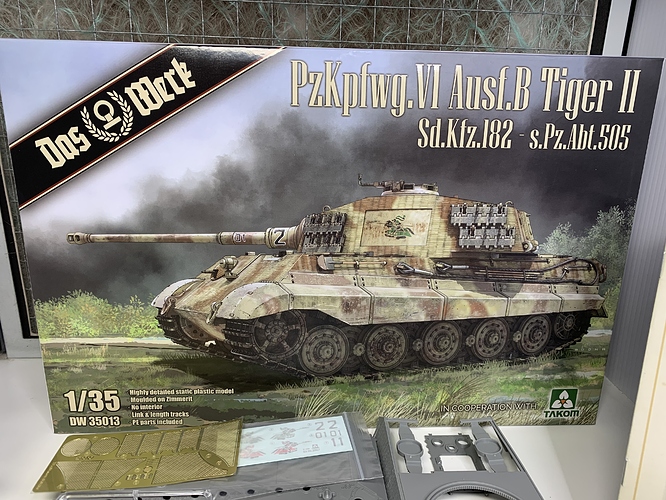 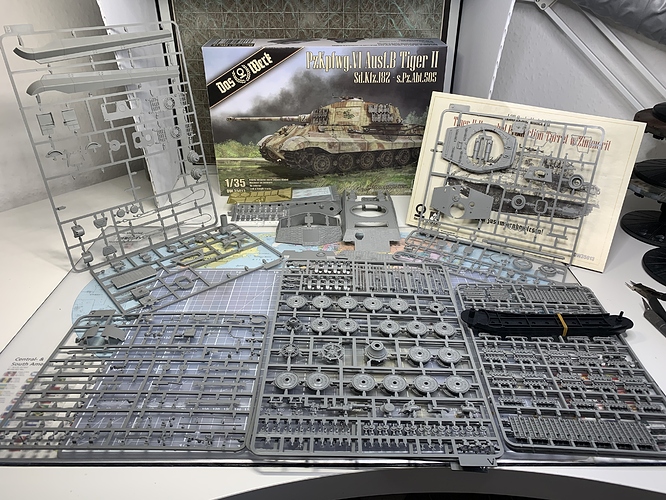 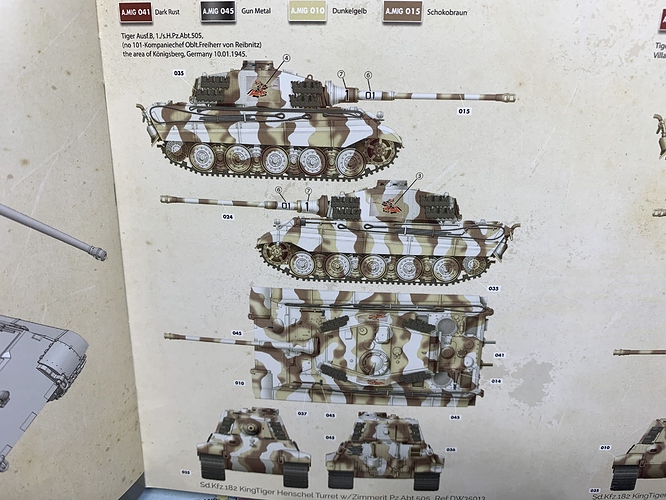 That finishing option with the charging knight looks really nice.

Looks like a great kit Jim and I know you’ll do it justice.

Thanks guys. Yeah that scheme really sold me on this one.

Any info on what aftermarket tracks would be suitable would be greatly appreciated, not my area of expertise I’m afraid. 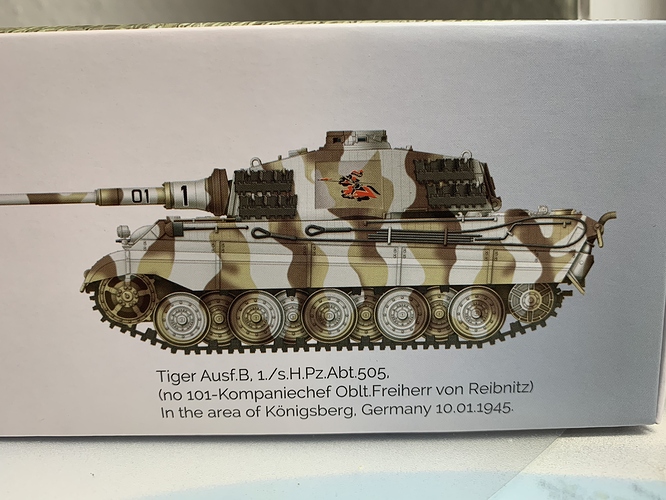 Thanks Dave. I will assemble the kit tracks before making a decision I think.

I must say, having assembled the main parts of the hull, this kit does not just fall together. Will post pics once I’m done with the running gear.

Looking forward to the build pictures. And yes, the attempted finish does look very nice. One question, though: Is it correct to continue the camo on to the road wheels? I mean they do turn and will most obviously give away the position of any rolling tank immediately as you have camo-painted parts moving against each other (if you know what I mean), and therefor tanks usually don’t have their wheels camo painted… please correct me, if I’m wrong, but I would paint entire wheels in one color (Dunkelgelb, Brau, Grün, respectively) at best…

A choice between two bad things:

We were told that tyres/wheels on vehicles are a certain giveaway so we always masked or covered the wheels.

I’m trying to think as the potential enemy of the tank: when moving, just aim for the flickering part(s)! I mean, camo is of course less for actual “hiding up to invisibility” but more for disrupting the shapes enough to make it much harder to be put into cross hairs effectively…

Anyway, with this in mind, camo could make sense here, because German tactics in late war where more on the ambush side of things, anyway… Blitzkrieg long over in a time everything was more or less uniform panzer grey 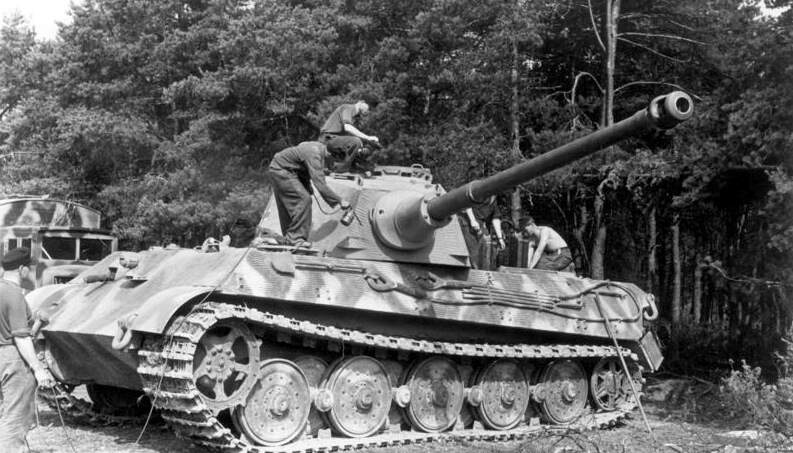 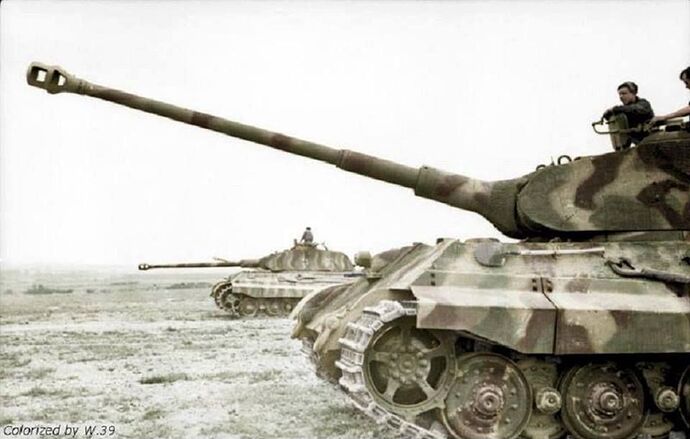 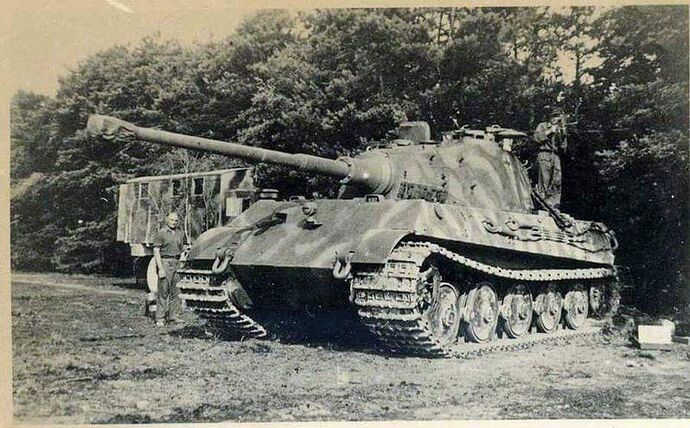 Look at the wheels of the tank in the background in image nr 2. Hard to say if they are one colour or camouflaged, turns into a blended colour in the distance anyway. A gunner aiming from 300 - 500 metres away or more might not even see the flickering?

Alright, alright, you got me on this one

Go with the flow then and paint it all up!

Doesn’t change the fact, that I’m looking forward to the build pictures!

Doesn’t change the fact, that I’m looking forward to the build pictures!

Thanks guys me too! I love that first pic of the guy actually painting the camo. I wonder what ratio of thinner he is using, and what pressure, and is it acrylic, lacquer or enamel, and has he preshaded or is he going to post shade! Ha!

And most importantly: Is he using the right color? Has he studied color ranges, saturation and hues of his time enough to make the right shot on this one… or is he simply using the wrong color and just about to produce a what-if scenario here? Or even worse: Outright incorrect?!

And I’ve just noticed the overspray on the tools on the side of the hull. He has some touching up to do there! Maybe he should have left them off until after painting…Ha!

If they only knew the painting controversies they will cause in the future.

Camo was not intended for moving vehicles in general. WW2’s navy splinter pattern is an exception.

Camouflage isn’t about breaking up the shape of a moving vehicle, its about concealment when it is stationary (a very good example is the autumn or ‘dapple’ schemes of late war German armour).

Hi all. I have this finally built up now. Sorry there weren’t any progress shots of the build, I’ve been sidetracked with a few things so been snatching time to put it together. I think the kit has ended up looking ok when built but I had my issues with ill fitting parts and my own rushed hamfistedness!

So, completely OOB it is then. The kit link and length tracks don’t look too bad and everything else will come together under paint and weathering. Pics show parts like fenders, running gear and exhausts temporarily fitted. Going to break it apart now and wash well in soapy water and then start painting, once I have cleared all the excess spruce from my workspace! 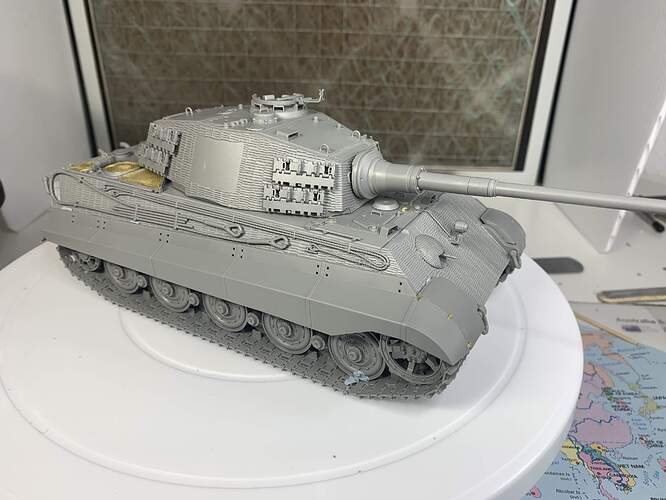 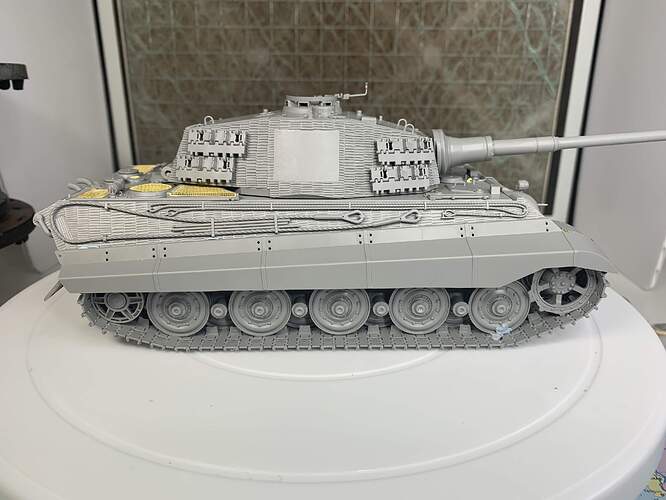 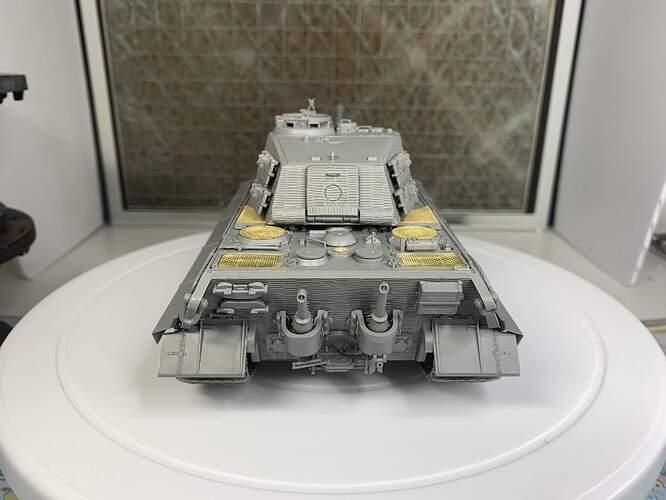 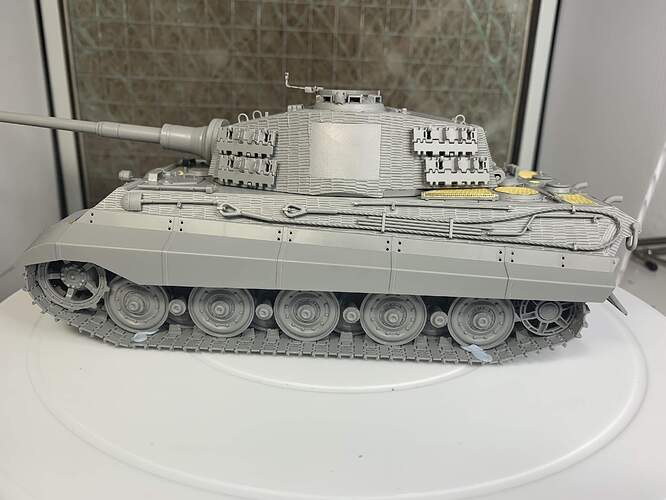 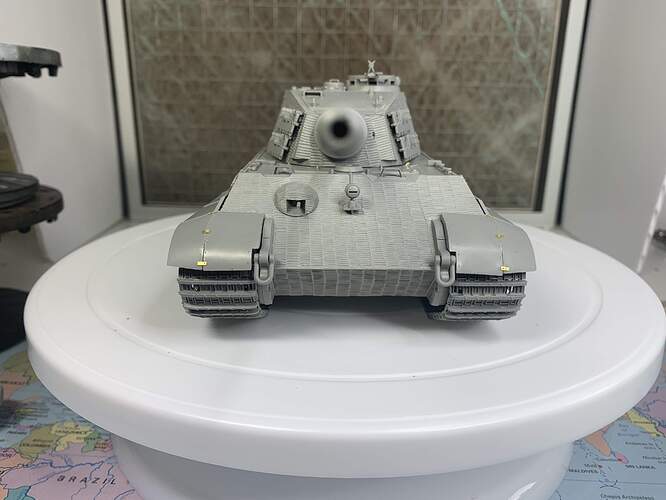 very nice Jim. KT is my fav WW2 tank just in front of the Panther… cant wait to see it finished. Just out interest, as its a kit with Zimm, do you think it would be easy to do flaked off/battle damaged bare areas showing just hull underneath … nothing excessive, just the knock and bang stuff etc ??

Thanks John. I guess you could sculpt some damage but that is beyond my skill set just now. It would be knowing how deep to go and when to stop!

I don’t know much about zim’ but I think this kit has done it quite nicely, although the join on the very front of the hull took some work to make it meet nicely. I did a tiger 1 years ago and used Atak zimmerit sheets which would probably have lended themselves to such a process…