Excellent points made by all. I appreciate the comments.

I agree that capital ship projects are sort of the exception to all the rules as they can take years.

My shelf Queens have gradually been whittled down from ten to three. Getting seven of ten going again was really difficult. The point about stuff going of the shelve taking years to return to is very true for me. I really really shouldn’t start a new crop of shelf Queens.

Longest I have had a kit sit is about 11 months before I got back to it. That was a venerable old Tamiya Sd.Kfz. 232. Simple and easy kit until you start throwing all the goodies at it. Just lost my enthusiasm for it. Honestly, I only got back it because I got tired of looking at the box on the shelf, taunting me

The one thing I have found is I don’t really loose enthusiasm for a particular build, I tend to loose modeling enthusiasm as a whole. I will just stop building for a few months to let the mojo rebuild and then will come back and crank out a ton of kits. In the last 90 days I have done 5 kits from start to finish and finished up one of my dock queens. Compared to some thats a slow rate of build but for me, its well above pace.

@McRunty Rory, lol a kit hitting my shelf can be like hitting a black hole in space, never know when or if the kit will surface again

Sometimes I get sick of seeing the box and they getting pitched in the bin.

and that G wasn’t the oldest, that honor went to 1994 started Tamiya Pz IV J - I finally got back to the J last year and finished building it - 26 years after starting it

I slog thru it.

If its a big 1/350 warship,I will plan an easier project to go along with it so that I can switch off if the large project gets stale.
But on a normal plane or armor I will power thru to the finish

That Tamiya Panzer is almost as old as I am lol! Glad it finally found it’s way off the shelf

@Mead93 that’s too funny the old Pz IV J is as old as some of the forum members. The J has been quite a comedy of errors over the years.

I almost always finish what I start. It’s rare that I delegate anything to the shelf. On the occasions that I do its usually because I’ve run into a problem and need time to decide how best to overcome it, or because it’s a particularly tedious build and I just need a break. In those instances its rare for the kits to sit for more than a few weeks or even days. Don’t really know if that counts as lost interest. My problem is more along the lines of deciding what I want to build next. Something I don’t really think about while working on a current project. Used to be strictly one build at a time but over the past couple of years I will start a second when I’m close to finishing, usually during the weathering phase so I have something to do while waiting for the oil wash to dry or while I’m fiddling around with the stowage. In my 50+ years of modeling I have probably never finished a build less then five times or fewer.

I’m like a squirrel chasing nuts, I’m all over the place. Typically only one kit going through major building and I tend to concentrate on painting when I have several stacked up. I’ll do detailing and stowage on a few at a time though right now a bunch are waiting on this as I’m going to dive into playing around casting my own stowage to stretch out some of that generic stuff I already purchased. I have a bunch waiting on finishing touches. My problem is I’ll pause for a few and then one of my kits in my very modest stash will grab my eye then I’ll crack it open, say whats the harm and I’m back chasing nuts. As I am still getting my feet wet, I dont mind setting a more complex kit aside while I sharpen a few skills before launching back into it. I do have a few cheaper aircraft kits that I ran out of steam battling fit etc that I really just need to wrap up and call good enough on and hang them from the ceiling, but the armor since its eye level I dont mind sitting on till I’m primed to finish them out with the attention they deserve.

Judging by the two-dozen half-built kits staring down at me from the shelf, I’d say I’m more squirrel than Rottweiler. All my builds get hit by AMS, and stall somewhere along the way. But with so many on the go, there’s always one I’ve completely forgotten about so it has all the thrill of a new kit when I go back to it! As long as a steady flow comes out the other end, I’m not too fussed about how the process goes…

I just put the blinkers on and go for it.

I’m an absolute basket case. Almost 40 started kits according to my Scalemates profile. Admittedly, some of those are second hand kits I picked up from various swap meets, with minor starts not by me, but the vast majority are kits I’ve started and then put aside for some reason. Most likely because I’m self aware and my skills don’t live up to my plans or ambitions for each kit in some way.
I go through phases where I’m either in construction, paint or weathering moods, but never all at the same time.
My mission this year is to finish one of the WIP stack per month while keeping the new starts to an absolute minimum. I’m on track so far, with 2 more very close to put me a month in credit.

I’m like a dog with a bone with models. Once I start, I don’t put it down until it’s finished. I find it very hard to re-focus on a model once it leaves my bench. When I’m working on an armor model, I get very into “Sherman mode” or “Panther mode” and I don’t switch themes easily. If I have to halt a build to wait for paint or aftermarket, I keep it on my bench and build something that is not a project - like a jeep or a motorcycle - while I’m waiting for the stuff I need. The only thing I put on the shelf are finished models.

I have a half finished 1/200 scale Yamato (model by Nichimo) that I started assembling in 1989.
It got shelved when I realised I would have to improve various areas. It might get built with RC so I need to figure out how to access the interior without damaging details on decks and superstructures.The latest plan was to cut the hull along the waterline.
The lower hull would have a trunk extending up to maybe half an inch below the deck, maybe with a sealed lid. 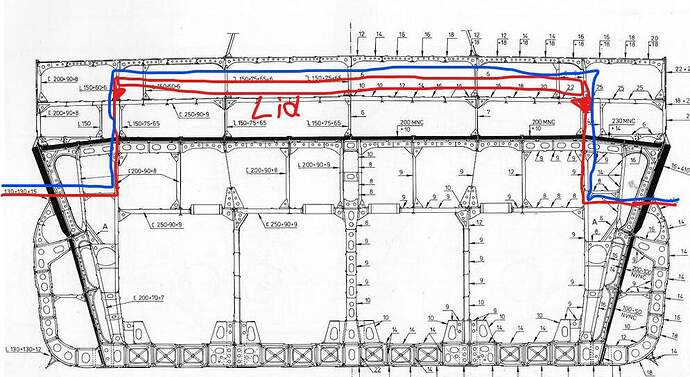 Alright you win lol! That one is older than me!

The older I get, I take more time building what I feel at the moment. So, I can have 3 to 5 kits going at the same time. When I young, pulling chocks for the Wright Brothers, I could build a kit about 2 weeks after starting.

I’m relieved to see so many replies from fellow modellers who have multiple projects on the go - some stretching back years (or decades!). Where I struggled at first with this thread was the assumption that shifting interest mid-project is actually a problem at all.

Yes, it’s definitely an issue if you’re a professional modeller building to a deadline(!) - but, otherwise, modelling should be all about enjoyment and escaping the everyday pressure in life. So, what does it actually matter what you’re working on or how many shifts, turns and stalls there are along the way - so long as you have fun?

To take that to an extreme - if you never finish a single build, but you enjoyed every moment you spent on each of them - that’s 100% fine by my reckoning (and maybe more than a lot of us can claim when battling to see some builds to completion…). While it’s a shared hobby, the way we approach it is totally individual.

So it is written. So let it be done.

"and on the seventh day he created…