Did the DAK really do this?

When I was a boy, I read somewhere that during the first or one of the DAK’s advances across Cyrenaica, that they mounted aircraft engines on trucks to churn up more dust and make their force seem larger than it really was. I have never seen a photo of these “dust makers” or found other references to them as I have accumulated my DAK library. So did this actually happen or is it a myth? Any thoughts or references would be appreciated. It could make a really interesting model to mash together, but only if it was real.
DAKjunkie

They did do such conversions, utilizing air cooled engines for the propeller and trophy British trucks. Paul Carrel mentions them several times in his book “Foxes of the Desert”.

There are at least 2 pictures of the Windwagen I’m aware of (hard to say whether this is one and the same vehicle, or 2 different ones): 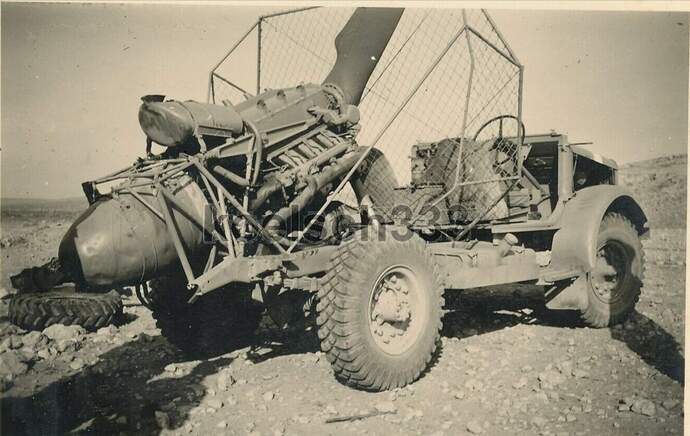 Ronald Schoenmakers (@RonaldS) is building one in the Dutch Twenot Forum:

While FrankS already built one in 1/72nd scale:

Bedford MW with Argus AS-10C engine, 1/72 Miefquirl Original: This unusual combination of a vehicle, a British Bedford MW (15cwt) and a German Argus A

Hmmm…Hot Rodding across the desert, anyone?

Thank you so very much Angel. It was in Paul Carrel’s book that I saw the mention of the Windwagon, aka Miefquirl. I am not at home so I have no access to my copy, and I did not want to misapply the credit. These machines are not mentioned in the Rommel Paper’s, Bayerlein’s book, the one by Maj. Schraepler, or one by another DAK staff officer whose name I cannot now recall. I have never been able to get a copy of “Rommel’s Funnies” which might have shown it. Can you tell me the source of the two pictures that you have or of any written references?

The model that you are making looks fabulous, but where did you find the type of engine used? Why wouldn’t they just reverse the prop and let it hang over the back of the vehicle? At least that is how I always had imagined they did it. Like the airboats that they use in the swamp. Have you finished your Windwagon yet? I did not see any pictures of your completed vehicle. Are you going to use the hairnet idea for the chain link fencing screen and solder brass rod to make the supporting cage? I do not have the skills to do either of those things. I would be interested to hear how you solve that problem.

Keep up the terrific work, I am envious of your talent.
Jack aka DAKjunkie

Thank you again for your fabulous input. Where are you located? I am in Sioux Falls, South Dakota, USA.

Both pictures come from the Internet-the B&W one was posted on Axis History Forum 2 years ago and it obviously comes from an expired E-bay auction, while the collor one was posted recently by FrankS on Missing Lynx.

The engine is definitely an Argus AS type- it is an inverted V engine with air cooling and it is easily recognizable. The Argus AS engine was used in Fi-156 Storch and Bf-108 Taifun, both were available in Afrika in 1941.

Mounting the engine facing to the front vs. facing to the rear allowed for a proper cooling airflow.Mounting some components(like the fuel tank) between frame sides allowed for lower height overall and better weight distribution.

My build is in progress, but with a very low speed. I’m currently working on the engine and fuel tank support frame and will post an update later this week.

I intend to solder the prop guard frame from copper wire. The mesh comes from Aber(two S-11 sets) and will also be soldered to the frame.

I live in Sofia, the capital of Bulgaria.

Nothing like a joy-ride through the desert. Besides, life was cheap in 1941!

It is an interesting question, though you phrased it as a statement. I have never seen any comments about how much it cost in DM then and in todays money to keep a DAK soldier fed, fit, and fighting in North Africa in 1942. Then factor in the cost of supplies lost in transit. I’m just guessing, but I suspect it was not cheap.
I know that I am taking your humor way too seriously, but you got me to thinking about what is not mentioned in any history of the North African campaign that I have seen.
DAKjunkie

… Then factor in the cost of supplies lost in transit. I’m just guessing, but I suspect it was not cheap. …

Was kinda’ thinking of this definition obtained from a google search:
life is cheap … (disapproving) used to say that there is a situation in which it is not thought to be important if people somewhere die or are treated badly: …

Although going slightly off topic, I was interested in the thought of the cost aspect … and thinking just how much money is pumped into certain things like just training and not full scale conflict when things go out the window.
when we did Ex Bright Star in Egypt in 97, it was then the largest multi national force exercise that bright Star had done. It was a Div ( i think it was based around US 3 Inf Div- but not totally sure) level exercise with combined Air and Naval assets ( a US led carrier Group in the Med and Air assets from US & UK bases in Europe. The whole exercise (and other Nations cost were met in part of full) by the US DoD.
It was centred south west of El Alamein and the Qattara Depression on the edge of the Sahara.
Near where we were based there was a series of empty building shells ( built or always used for Bight Stars) which had prefabricated interiors and the external fittings for a PX, Burger King, McDonalds, a Pizza outlet, a Ice cream franchise and a few other R & R type shops, which were all flown in from either the US or W Germany. Div level rations/equipment were flown in daily as was the stock for the above shops. Bottled water on its own was flown in daily from W Germany for the Div in C5s and C141s. It got to the point where we couldnt give the water away we had so much of it. The amount of money and resources spent on this must of been phenomenal. Was a very good exercise though, and thank god for Garmin Sat Navs … the desert is not map friendly lol