Well got everything in place now to start my Saladin build. Black label kit, DEF Wheels and HKCW upgrade set from Scorpion Miniature Models. The kit wheels are way over sized and have no markings on them hence the DEF set and the upgrade set will address the lack of detail on hatches etc. and some overscale detail. This will be completed as the Troop Leaders wagon 4th Troop, A Squadron, 15th/19th Hussars, Cyprus 1985. It was one of the last 6 operational Saladin’s in the British Army until they were withdrawn from service in the early '90’s. 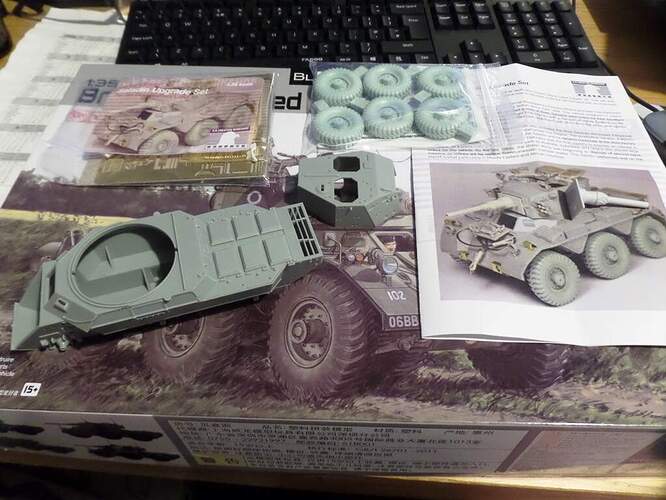 Maximus, there’s a good mate of mine who maintains a blog and he produced a very respectable Saladin from this kit a few years back; you might wish to have a look:

I bought this kit a few months ago and will be watching Maximus. I guess I’ll be getting the DEF wheels and other stuff lol……

Got this kit and was based on Cyprus watching with interest

One of the best 8 months I had out there…

Will be tagging along Max and seeing how it builds up

Cheers Brian, I’ll def have a look at that site. The wheels are a must as the kit ones nearly rub the underside of the sponsons/bins. I defy anyone to find them cheaper in the UK than from Mick at Scorpion Miniature Models, ditto the upgrade. I loved Cyprus, for a first posting after training you couldn’t do much better.

Maximus any chance the Saladin would have been painted in the Berlin urban camo ?? I looked but couldn’t find any references.

Interesting about the wheels rubbing the bins etc as my oppo devised a method for reducing the height (which I’m sure you’ll pick up from his build blog).

Cyprus as a first posting must have been amazing - I imagine evrything sort of paled after that! I only ever exercised there and that was in my second bite at rthe military cherry as a TA gadger on exercise sometime in the 90s. We were based at Bloodhound Camp; the first week was really basic skills refresher and lazing around on the beach. Second week: I don’t think I’ve ever lugged so much ammo in my life (the Infantry battalion I was then part of utilised its Clerks as packhorses(!)

It depends if you want to save money working to correct the OOB parts rather than replacing it.

You could do a what-if,

I also have this kit and the DEF weighted wheels. Looking forward to seeing your build.

I dont think so Richard, Im pretty sure the time frame doesnt fit in, as Berlin cam wasnt devised until the early 80’s by some Sqd Ldr posted there, and by that time, the Saladin had pretty much been replaced by Scorpion/Scimitar and Fox. I would go with Frank and do one as a what if should you fancy it.

I remembered this article I found about Berlin Urban cam … its quite interesting for those who like a bit a background.

Perhaps the ride height anomaly was because of the too large wheels. Replacing them with the DEF wheels might rectify that. I spent just under three years in Cyprus in the Sovereign Base Areas and two UN tours on the green line. Loved the place and the people, probably why most of my jollies are taken in Greece now.

Interestingly enough - well - in a sort of connected way, the officer who devised the Berlin scheme was blown up in a Saladin in Aden during the Aden Emergency.

Here are a couple of pics of the wheel differences, as you can see there is quite a difference in height between the two which could be the difference in ride height. Also a quick pic of how far I have got, there aren’t really a lot of parts to this kit. It’s quite a big empty box! 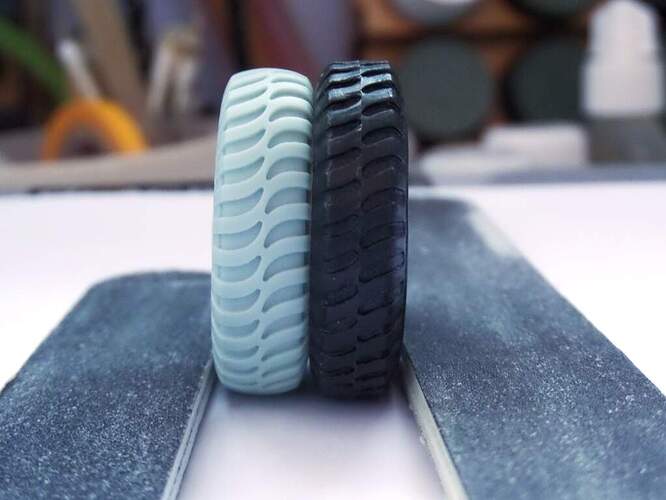 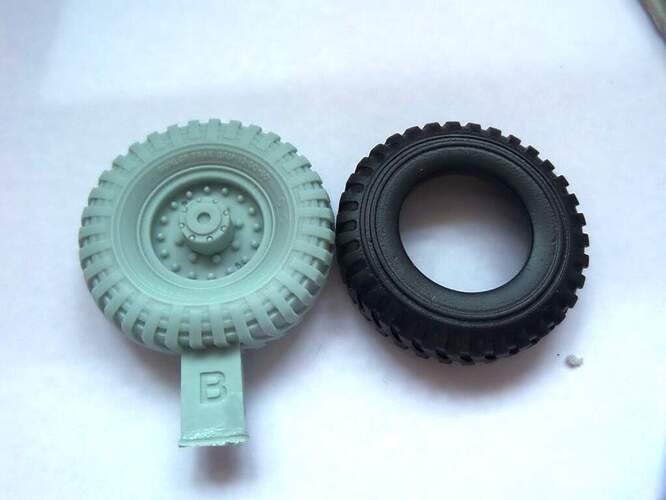 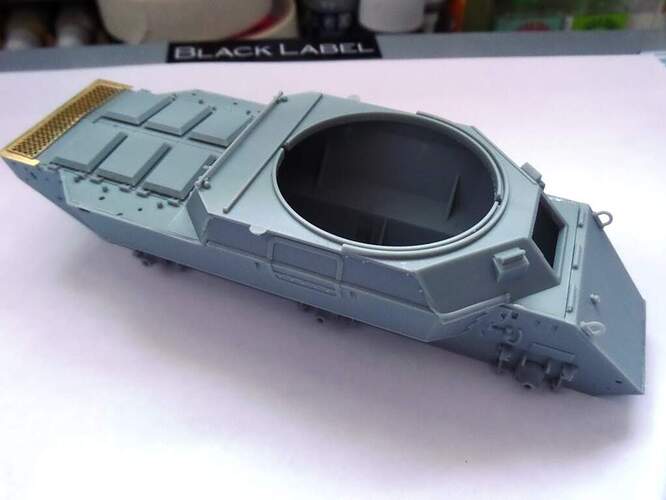 Oh yeah that’s right. Saladin was out of service by then. I got the time frame wrong big time lol!

Latest update as to how the build is going. By and large there are no major problems, small niggles that you get with most kits I think i.e. slight warpage, parts requiring slight adjustment etc. My big bug bear is that the sprue gates are placed in some cases on the front of a part which will be in full view when in my view it would be just as easy to mold a part the other way around. Some of the update parts are finicky and I decided to go down the kit parts despite it being slightly overscale. Anyway have a look. 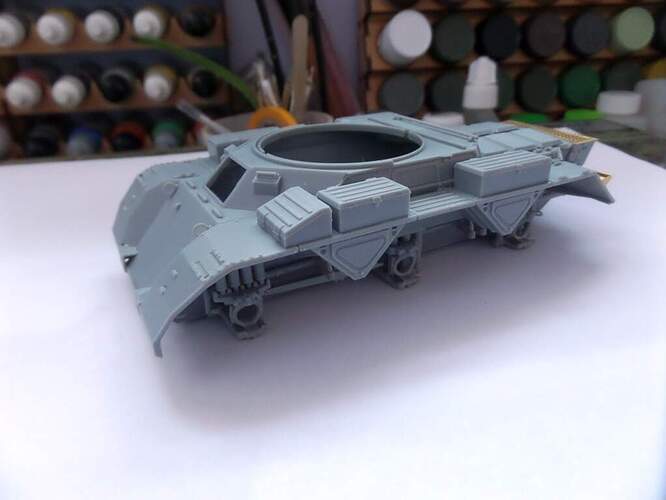 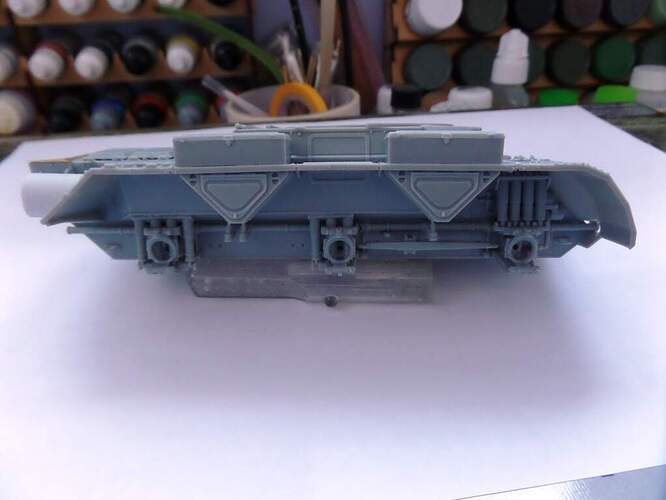 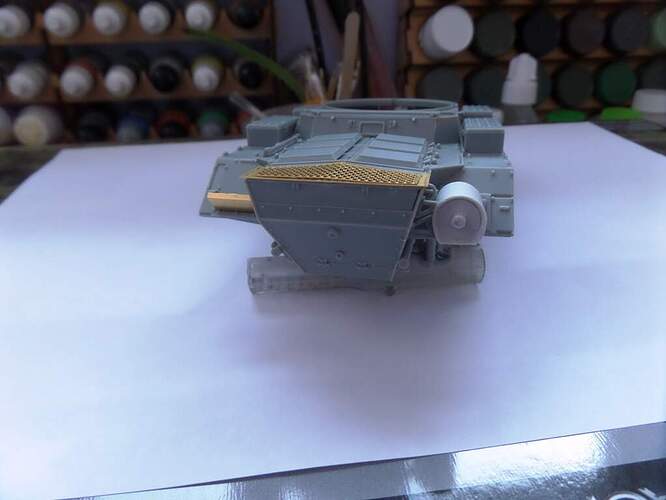 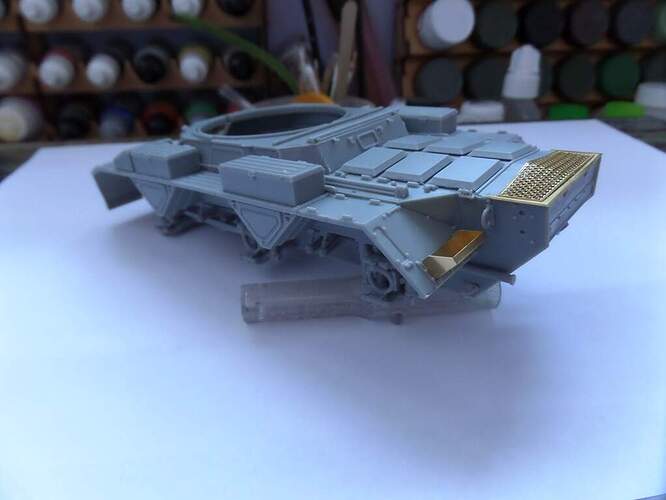 Looking good Max, nice old chunky wagons. Do you think the DEF wheels will solve the height problem that guy had from the link Boots posted ?

I think the might, it was only a couple of mil height difference and I think that will be covered by the new wheels.

Don’t forget the exhaust tube between body shell and exhaust, the wheels should bring body lower and hight to guard bigger.