OK! That worked! Thank you so much Mr. HvyArty!!

I seen it many years ago at the Armor Museum at Ft. Knox Kentucky. I was stationed there from 1988 to 1992. The place was a Modellers dream.

Interesting. I was wondering how they kept the outer track sections from slamming into the tank. I wonder why they just didn’t use a solid tow bar for them?

Thanks for all the good info Mark. Some of your advice is a bit beyond my abilities to correct but maybe not all of it. The capstans might be able to be removed from the hull without too much damage and then added to the sprockets. If not, I might be able to ‘fake’ some from the spares box well enough to get by, though not really accurate. Then again, neither is the rest of the Dragon kit. I could also scratch something resembling the drive fitting from something in the spares as well. Adding that would be pretty easy. Two guys and a rope? My board is too short for that but a small separate base sitting behind the main one with a couple figures on it and some rope might add to the interest. Not sure how two guys on foot could hold back those sponsons on flat ground much less a grade though. I’m with Gino, why not use a tow bar?

Might have some “spla’nin” to do to the judges at the contest next weekend about the towing configuration and the rope thingee lest they move the model to the “What-If” category. Anyway Mark, thanks for the insight and photos of the real T28. Much appreciated.

Great job on a less than great kit! And @Buq-Buq those are some really nice photos.
Here is a video showing the outer tracks/sponsons being attached to the main vehicle: Reassembling the Last U.S. T28 Super Heavy Tank - YouTube
There are a number of videos available on the T28, a very unusual vehicle.
Ken

That looked like a cinch to reattach them. No sweat!

Yeah . . . a towbar . . . I gotta say, I have no idea why that wasn’t used instead. Apparently there was something that prevented it. It was NOT the lack of a towing pintle (the T28 has one). I cannot say.

The rope/capstans work but putting pressure on the capstans. The rope is wrapped around the capstan a couple times before it is spooled out to the crewman holding it. Merely pulling on the rope generates enough friction to act as a break on the sprocket: if the sprocket doesn’t turn, the outer track unit will not move.

I would also strongly encourage you to see the images in Firepower by Richard Hunnicutt. There are top quality images there. One of them shows the soldiers holding the ropes behind the train.

I’ve just looked, and Nick Moran’s Can Openers also has some pertinent images of the T28 in this configuration — one of which shows a towbar (!!!). As Mr. Moran notes “This would certainly help reversing.” (!!!)

I should also mention that my description was a bit misleading with regard to the transfer of power to the outer track sections. The “caps” on the sprockets were not the actual mechanism for transferring power to the outer set of tracks — It looks like a splined shaft was slid through the outer sprocket and mated up with splines inside the main sprockets coming out of the final drives. There is a removable plate over the sprocket on the heavy armor side plates that was presumably removed in order to insert/remove that power-transfer shaft.

Rick, I understand that you’re in a bit of a pickle regarding the size of your base . . . but I would encourage you to see what can be done to show this towing configuration with the ropes & personnel. I’d like to see you put together a different base for displaying your work. Ithink that the goofy nature of this concept is too good to pass up in this format.

OK, that’s all for now. Thanks for sharing your work!!!

Marvelous modeling job done there! You deserve a trophy simply for you diligence before anything else is even considered!

The T-28 is like an old friend to me after growing up in Louisville and visiting the Patton Museum annually and then volunteering at the Museum for 8 years. 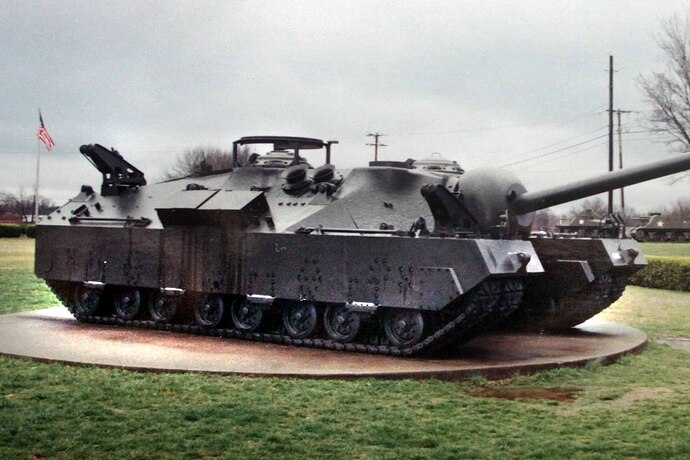 One correction though - unless you know something I do not; this prototype vehicle has never been restored to operating condition. It was on display at Knox outside for decades (as shown above) and maintained by the staff only cosmetically. I assume it is now in storage at Ft. Benning, blocked from view by the public.

Note: The side tracks were removed however to facilitate the relocation to Benning.

Sorry to come so late to the party here:
I just today discovered your post.

I immediately wondered if you knew about the capstan braking used when towing the outside tracks. (Don’t you just love the “automatic” human braking system?) 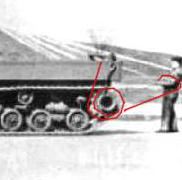 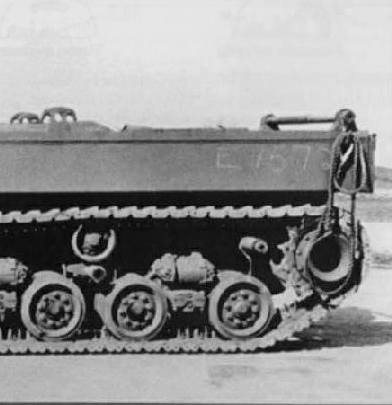 Sorry but these are the best photos I have. 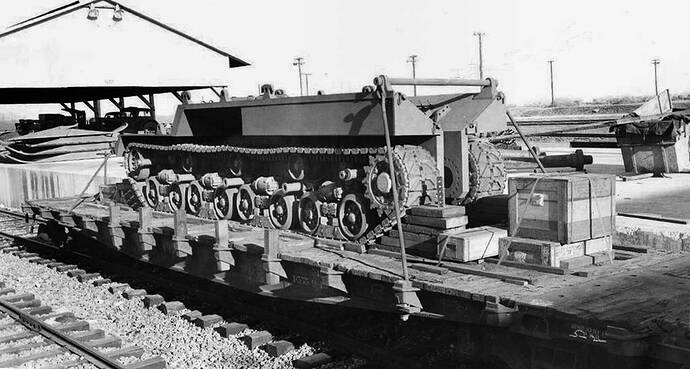 Those massive “travel” cross bars are/were stowed in compartments inside the sponsons that were not accessible until the outside tracks were removed.
Do not know why the capstan drums have been removed here in this railcar shipping photo as replacing them would no doubt be the first order of business upon arrival. 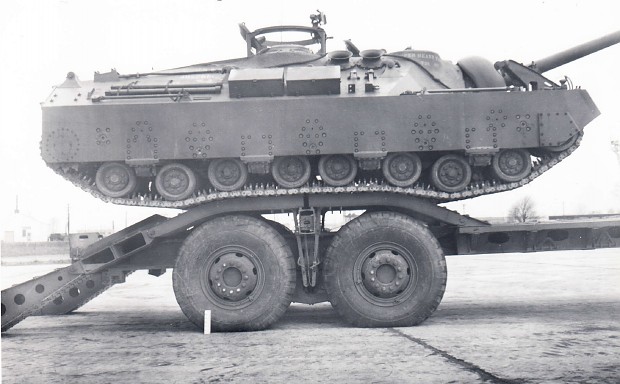 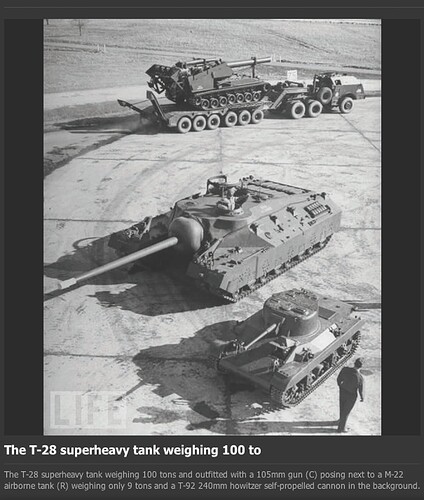 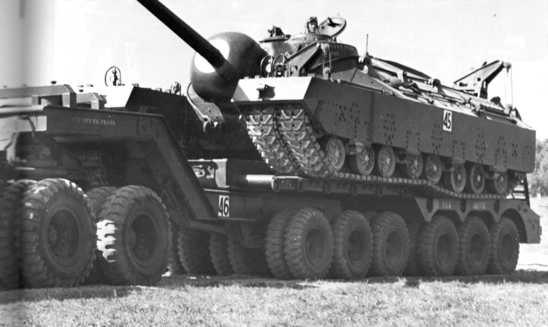 If you think about it using the crossed towing cables gives you both a tighter turning radius and more maneuverability than would a traditional “V” shaped tow bar.

But I admit a solid tow bar WOULD eliminate the need for the human “brakemen!”

All photos seen below credit the “Patton Men of Steel” Website 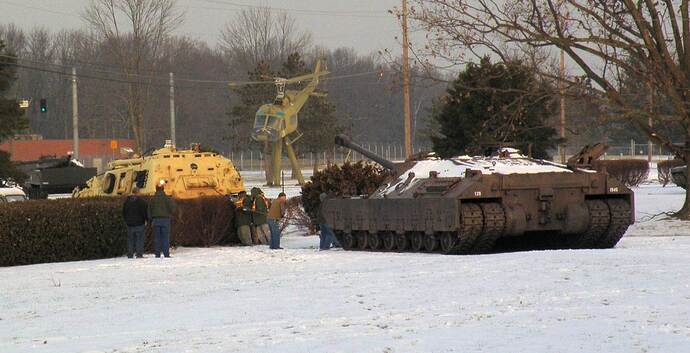 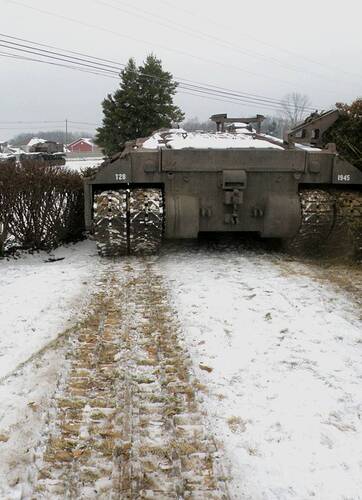 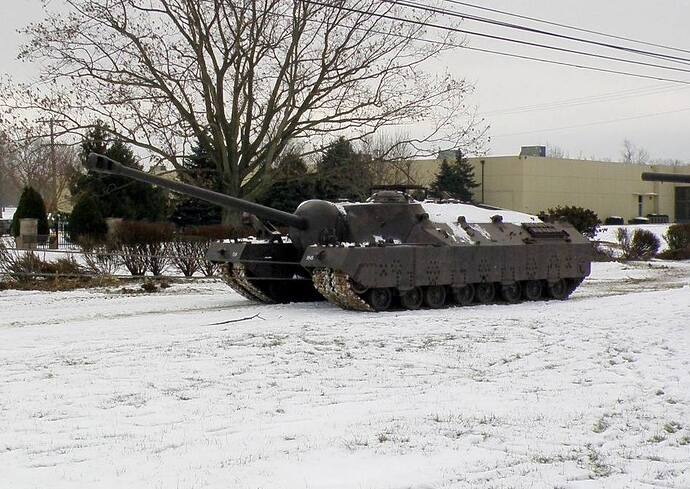 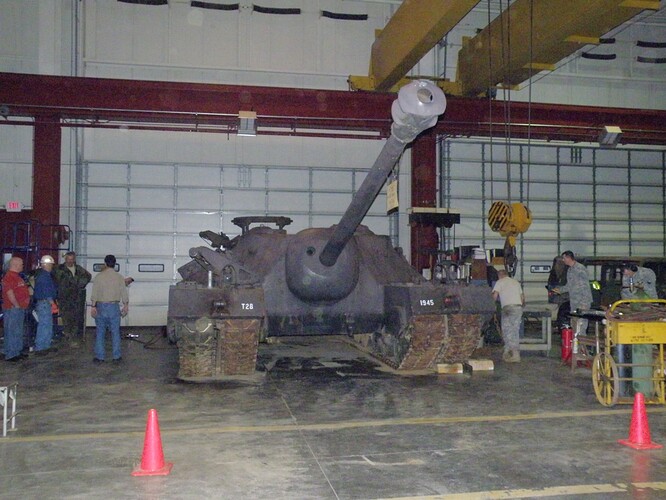 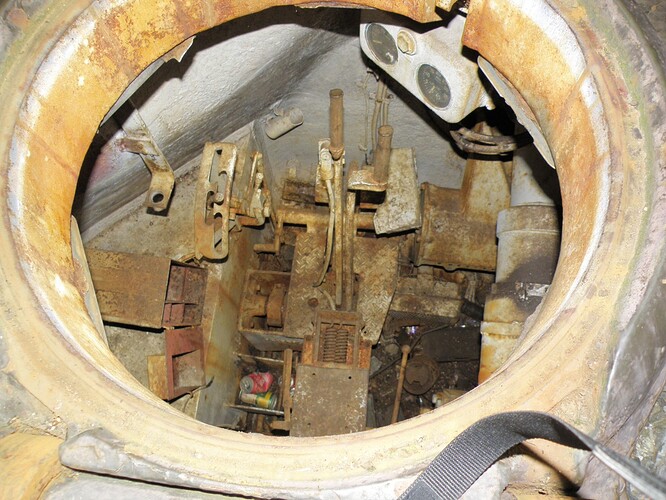 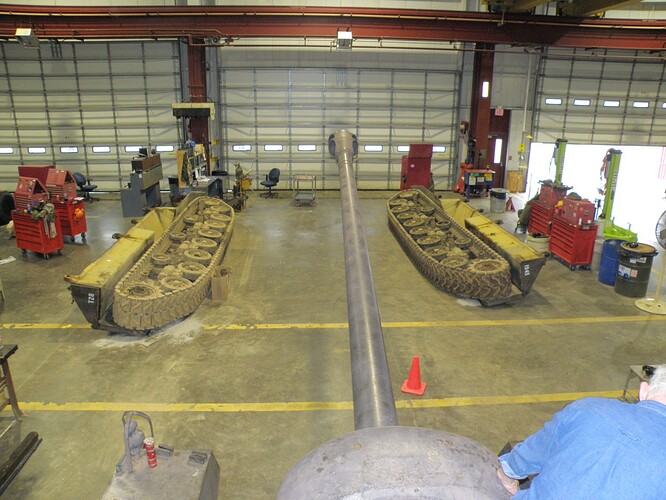 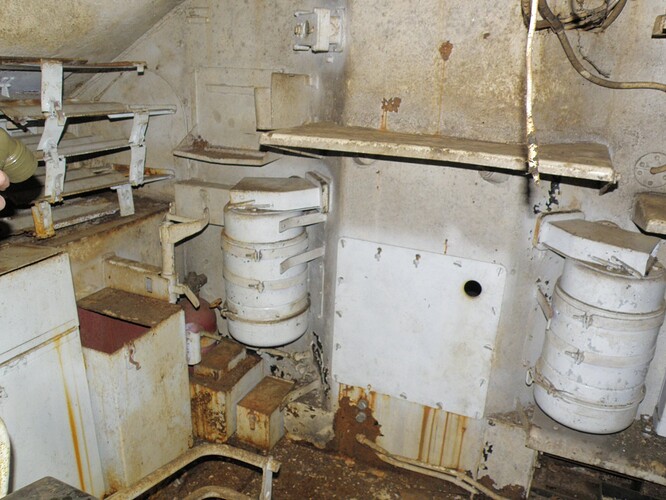 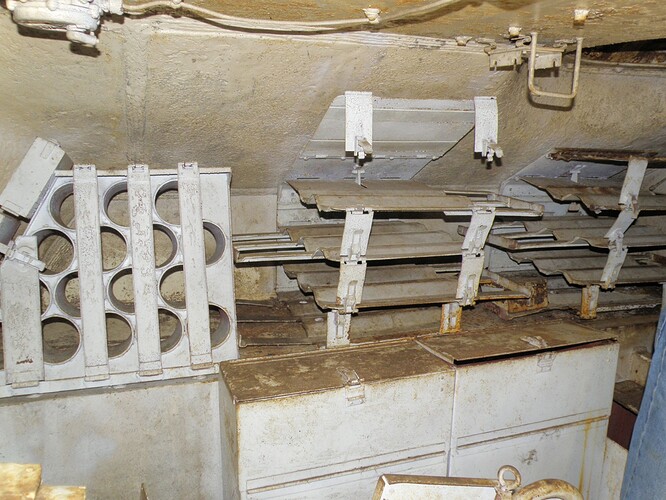 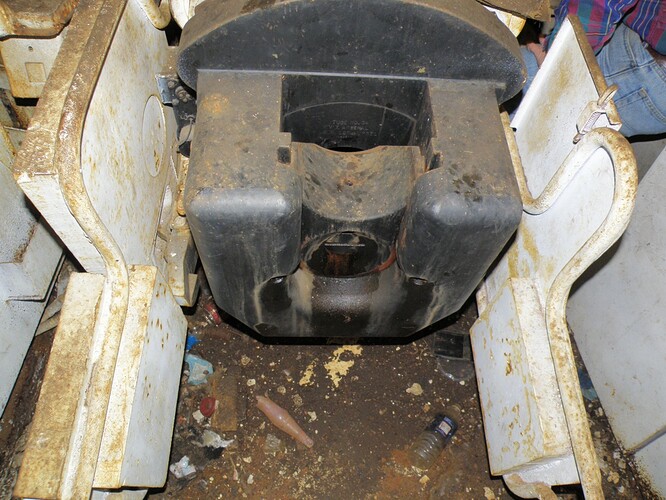 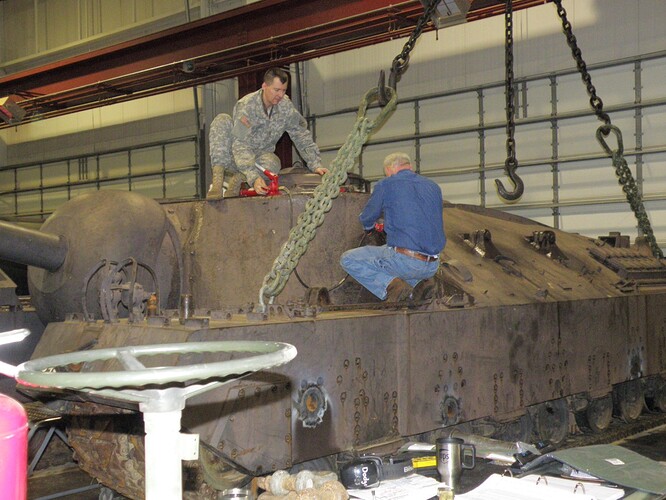 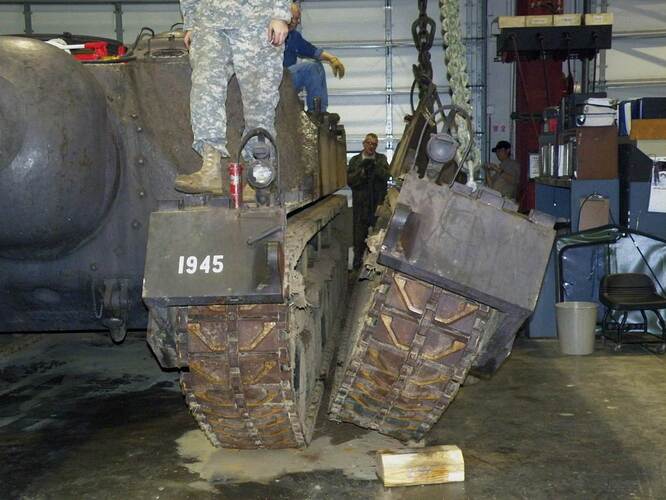 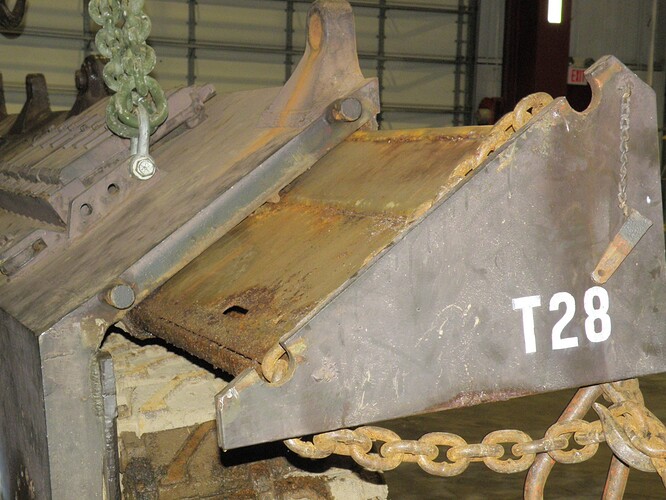 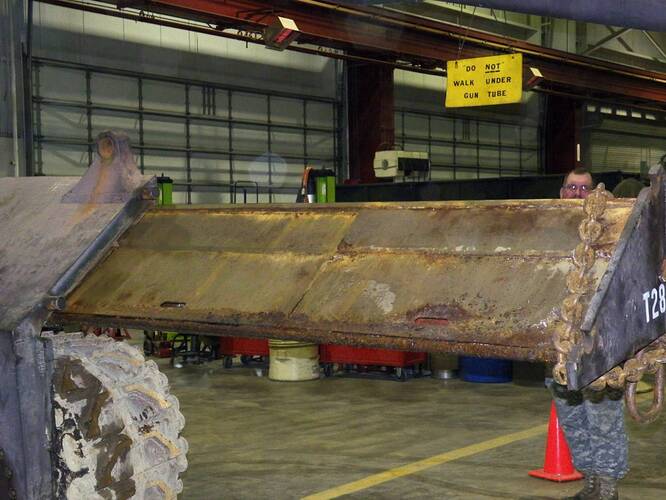 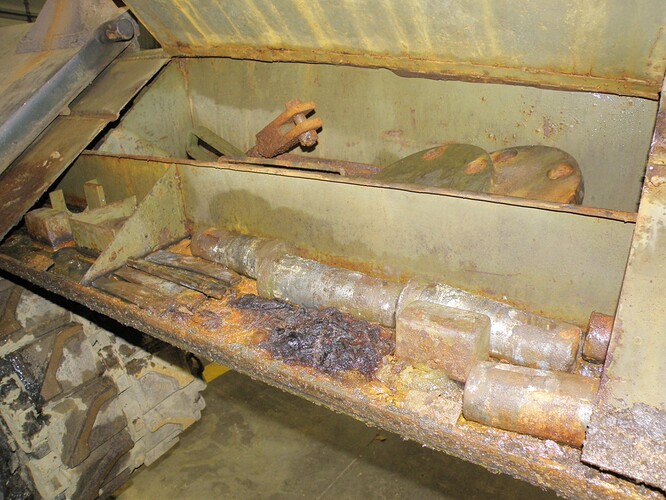 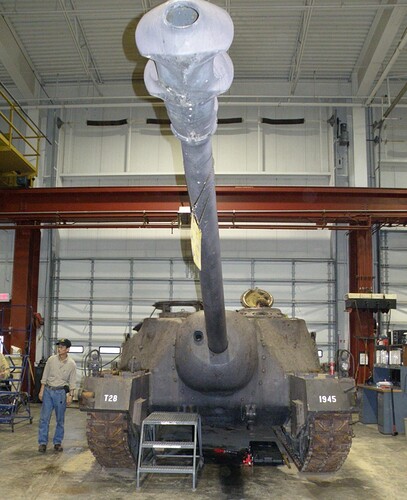 I do very much wish I had been there that week!

Well, I’ve got to say, helluva build! Well done Rick, and very helpful to those who might, might, just one day tackle this beast (not me for sure).

165thspc,you may be right about it being operable. Last I heard was over a year ago at Benning, maybe when it was moved. The restoration may just have been cosmetic and the poster had his facts wrong when he used the word ‘operational’. Can’t believe everything you see on the internet.

Buq-Buq, you’ve got me thinking. I may just wait and save this one for the show in September. That will give me time to figure out what I want to do. A week is just not enough time. I’d like to get capstans rather than trying to take mine off the hull and bugger it up and my GI figures will be hard to modify into a rope pulling position. I would hate to mess this up after all the hard work to get it to this point.

Thanks BootsDMS, I do get some grief about not ‘weathering’ my builds but I like to present the subject as parade-ready or as-restored. All these subjects were new at one time and, frankly, I think it is just as hard to do a very clean build and paint job. Every little mistake shows. Don’t get me wrong, I admire those who can do a realistic weathering, rusting, chipped, muddied finish. That talent is just not in my wheelhouse. Can’t teach this old dog a new trick.

After being rediscovered stored in the back of a motor pool this T-28 has been kept cosmetically clean and good looking both before and ever since. For a time it was scheduled to be a range target but someone made a point of always pushing other tanks to the range and holding on to this one. (Smart guy!)

So lite or no weathering is correct for this particular vehicle.

The last I heard it was not operational and had to be towed or pushed by an M88.
Ken

The T28 had its outer tracks removed in 2017 so it could be blasted and painted. As a side note it broke lose from the trailer and rolled down a hill causing damage to the rear suspension units. The tank has since been repaired, repainted and the outer tracks put back on. (there are youtube vidoes showing this process) and it is now inside the new US Army Armor facillity. It has not been resoted to running condition and I doubt it ever will. I visited the collection in 2017 and they did not seem to be fans of making anything run due to the risk of fires ect. It is a shame that this collection of armor has been off public display for so long but at least they are finally doing something to get them out of the weather and preseved for the future.

The CMH has never been a fan of returning equipment to restored running condition.
They seem to prefer that everything be just nicely painted rotting hulks like at APG. It is even written into their charter/directives. “No item shall be used for its’ original propose”. (But does that mean cannot be used for war? To them it means it can’t even be started or driven!)

The concerns for a fire hazard is just a ruse.

The Patton Museum was always at odds with CMH because the staff and volunteers at Knox were constantly restoring equipment and returning it to running condition AND operating it with 2-3 weekend reenactments each year and sometimes monthly exhibits of operating one piece of equipment or the other.

Just as a clarification, 165thspc was not the original poster I was referring to. It was someone on the internet that I had found in my initial research into the T28. Sorry for any mis-interpretation of my comment.

The Patton Museum was always at odds with CMH because the staff and volunteers at Knox were constantly restoring equipment and returning it to running condition AND operating it with 2-3 weekend reenactments each year and sometimes monthly exhibits of operating one piece of equipment or the other.

Which may explain why the Patton Museum no longer exists.
Ken