I’m going to copy and paste several of the current GB posts so we can see how they look in the Beta Forum format,
Joel

Well folks, it’s time to turn our dreams into reality, just a bit smaller than we always wanted perhaps!

This is campaign to allow people to build the motor vehicle of their dreams. This should be anything with wheels that you would just love to have sitting in your driveway or garage at home! Car, truck, motorbike, bus, tractor, ride-on mower, whatever!

Rules and Regs and Enlistment page is HERE

We won’t be putting completed photos into a gallery, instead we will create a photo feature at the completion of the event.

A big thank you to Michael (Cosimodo) for taking on the leader role here, this promises to be another great Group Build and I’m sure we will see a wide variety of makes and models hitting the benches.

Don’t forget to add in your theme song to go with your build!

You know the drill, lot’s of photos, lots of updates, lots of support and encouragement for your fellow autophiles in the difficult times that we are all facing right now. This forum is especially important in these times of social isolation, so let’s turn it into a positive! Please stay safe, and best of luck to everybody with all of your Dream Rides!

As always, I will keep a Group Build summary rolling as we go.

If anybody has changed or firmed up their proposed builds, or spotted anything wrong in the list, please let me know.

Well, as D said, a few of you that live in the southern hemisphere on the Pacific side, have already reached Oct 1st, the official start of the our latest AutoModeler GB, so let the fun begin. For me, I have to still wait one more day looking at the Monogram Cobra box dead center on my Tamiya Work mat.

But for those of you starting today, enjoy the ride, and post often.

I’ve re-read the rules and noticed that one of the requirements is what music would have tuned the radio to while driving our magical ride. For me it’s easy: Beach Boys, and Jan & Dean.

Welcome all to the Dreams Are Free group build. I am your host for this event though I must admit I am still stuck in the workshop trying to get the entry for the last campaign over the line.
Hope to see some inspired dreams and don’t forget to bring your playlist with you. Great to know what you would listen to driving that dream machine down the road.

Thanks for taking this on. I gotta get my Ferrari out of the stash and start asking silly questions about primers and engine detailing. :-H

Oh, there’s a music question too. I gave up on terrestrial radio in my car a few years ago. I got tired of hearing idiots babble on about trivial BS and the constant ad blocks were ruining the drive (as if Seattle traffic made it better). I finally set up my iPod (I know old school, but it was cheap) and mostly filled with the Beatles, Led Zeppelin, Jethro Tull and a few big band tunes for variety. Crank the volume to 11 and I’m on my way. 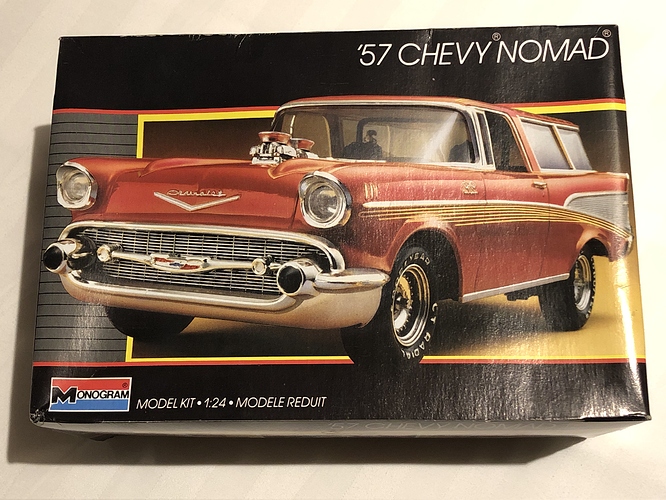 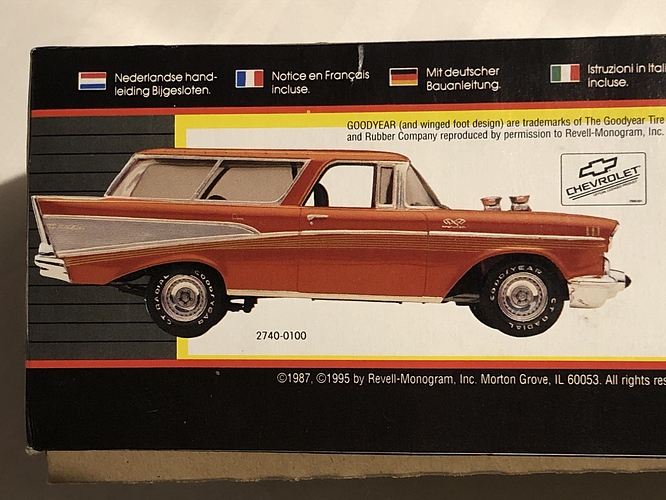 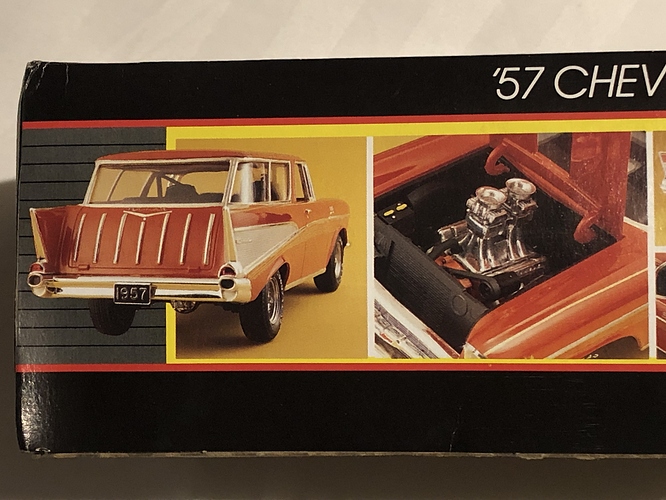 And made a start tonight on some random stages of the build to see what I’m up against: 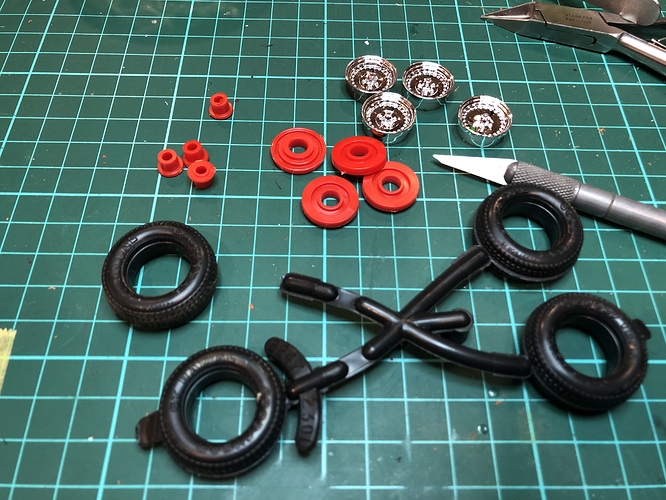 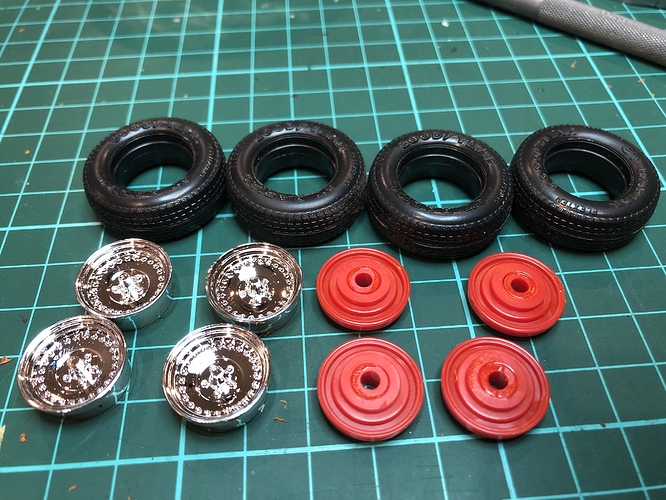 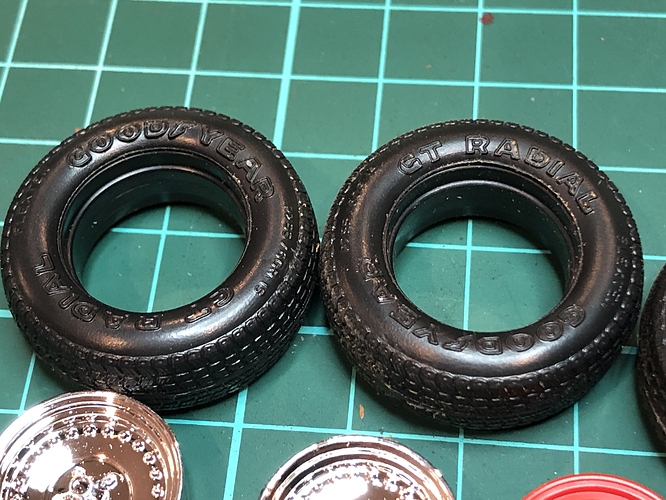 Open-backed front seats. Why Monogram, WHY? 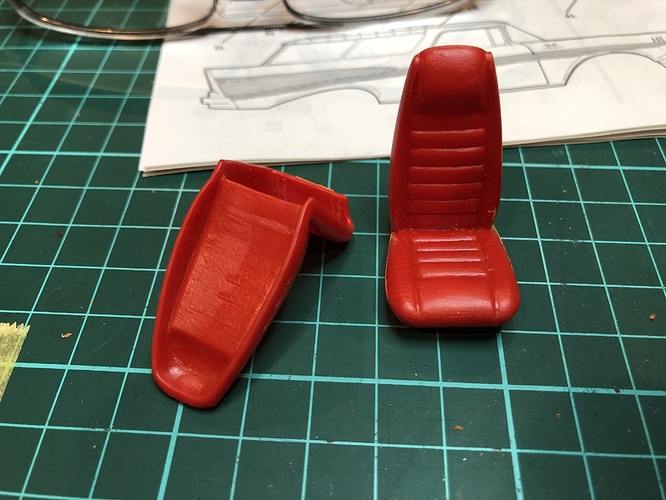 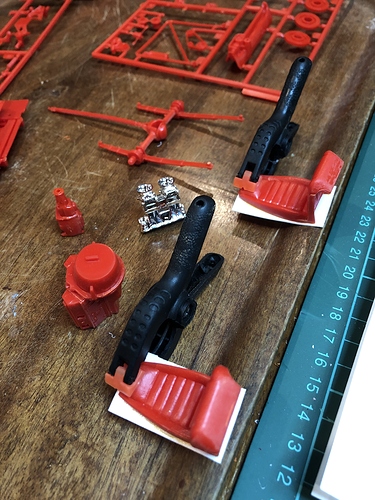 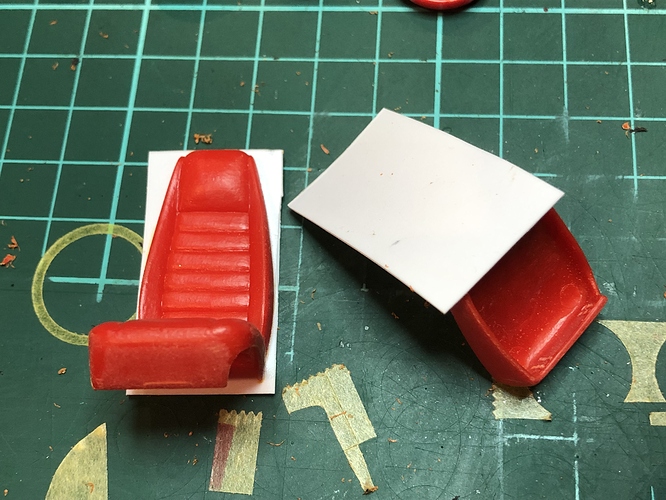 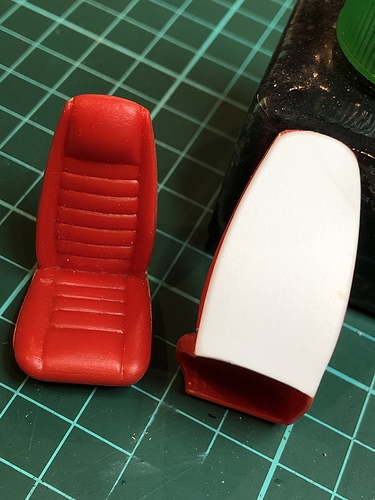 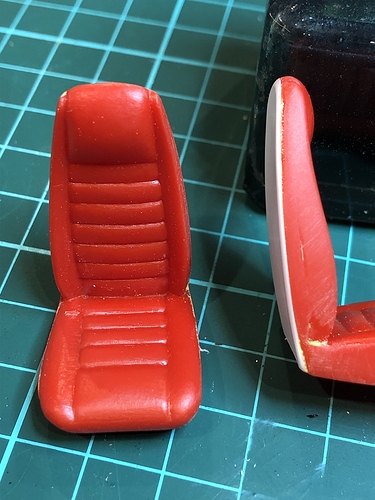 Well, Oct 1st finally got to Long Island New York, and it’s time to start my dream build kit. Honestly, I use to dream about a 289ci Cobra just about every night for quite some time as once I got to drive a 427ci Cobra on the street, it was way to much car for this 20ish year old to handle in timed events. But for the Dreams are Free GB, I’m going with the Monogram 427 Cobra Essex Wire kit as I got it 2nd hand and opened, rather then the S/C kit version: Street/Competition that I wanted 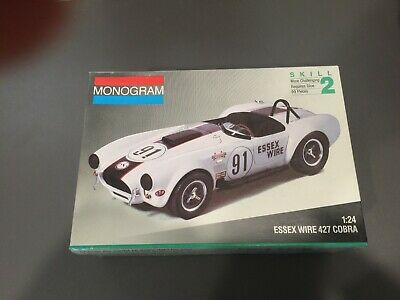 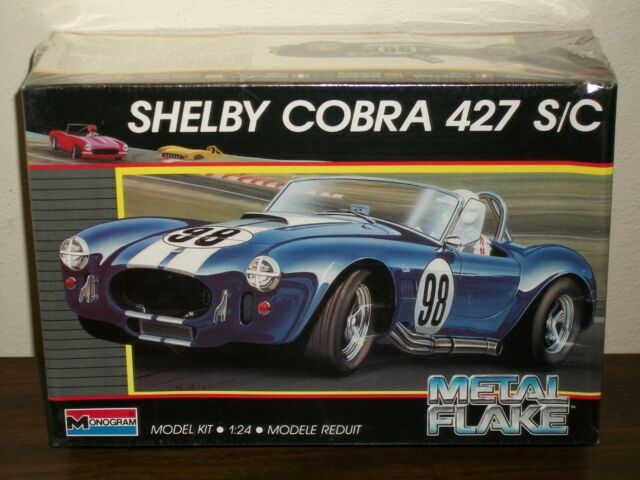 Differences are that the S/C version has the regular windshield while the Essex version just has the home made plastic wind screen. I was fortunate to have a friend send me a full frame but no glass, so I’ll be making one myself. Just not sure which will be on the car. Actually, my MGB had both as I removed the windshield all the time for solo and timed events. Other differences are the wheels and exhausts, but I’ll work through each issue as I go through the build.

I just took a quick look into the box, and just like D’s Nomad build, the Monogram seats have no backing. Same question as D: Why would they do that for a model that’s just two seats and a convertible to boot? Beats me.

I’ll be starting my build today, and posting tonight or tomorrow for.

As I said in my previous post, any song by the Beach Boys and Jan & Dean from the 1960s car, beach, or girl wise would have been what I always preferred on my AM car radio. Yep, no FM radios offered by MG back then, and after math ones were way out of my price range. All extra cash went into parts for the MGB or needed for dates with my girl.

And a special thanks to Michael for becoming our Group Leader.

Great stuff Joel, I’ve always loved the Cobra body style and have a couple in the stash waiting patiently!

I spent some time tonight with the “Cut/Scrape/Sand” tool kit getting rid of the nasty little seam and mould lines on the body, and test fitting the bonnet and floor pan to see if any nasty surprises could be avoided. All looking good so far! 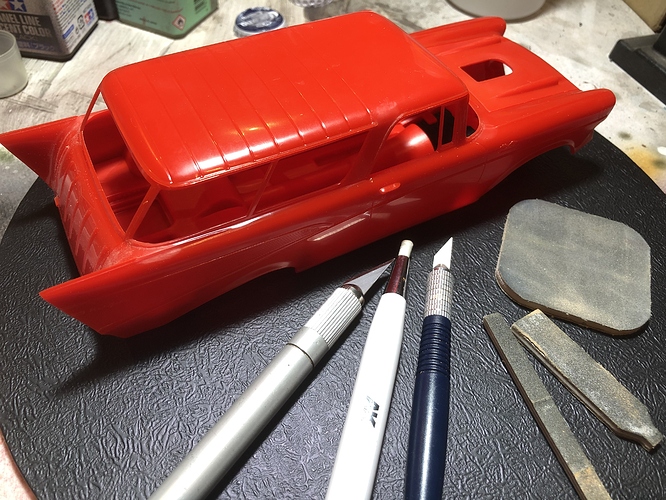 I will clean up and test fit the chrome parts next prior to hitting the body with a primer coat.

Great to see a couple of dreamers out of the blocks already.
Joel, the Cobra looks a classic. Are you going for the Shelby blue or some other choice?

Damian, I don’t know how you can handle that red plastic, man it’s bright, so I would hurry with that primer coat :-)–<

[quote]Damian, I don’t know how you can handle that red plastic, man it’s bright, so I would hurry with that primer coat
cheers
Michael[/quote]

I’m on it mate! Funny thing is, I’m going to primer over the shiny red plastic, then paint it shiny and red :-?

Some more prep work tonight, cleaning up and test fitting parts and sub-assembling the sub-assemblies. I remembered to take my own advice and test fit the chrome parts prior to painting the body, and so far they seem to fit very nicely. Only some minor adjustments were required, and in general the chrome is quite nice. This biggest problem is the sprue gates on the visible edges of the chrome parts, and quite large, so some touch-up will be in order. 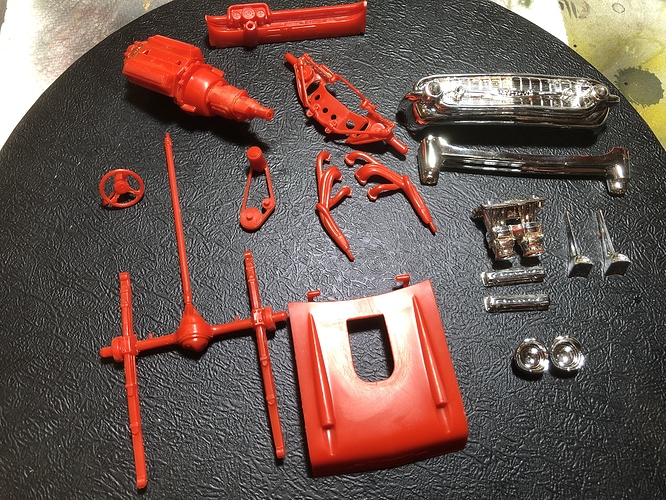 D,
Wow are you fast out of the blocks. That Red is really bright. A good primer is really going to be needed for sure.

The seat backs are looking real good at this point.

Well, the Dreams are Free GB is officially underway, and as I posted originally in the pre-GB thread, the Ford Shelby Cobras were a real dream of mine.

Basically back in my High School days I wasn’t much into drag racing, but got hooked on road racing both here in the states and in Europe when I bought my 1st copies of Road & Track, and Car & Driver magazines in 1963. Each had a section on road racing, so I got to follow F1 and Sport cars racing even though they were usually a good 3 months behind the actual event. Still, it was better then nothing.

By 1965 the 427ci Cobras were the kings of the Endurance Racing and Sport Car circuits. More then once I concocted all sorts of schemes to convince my father to let me buy a Cobra with my life savings. And more then once Dad just said NO!!. So I never did get one, but I still dreamed of driving one at the Bridgehampton time trials, and SCCA Solo events like I did with my MGB.

I managed to get a job working part time at Rascal Racing and being on their pit crew when needed, which wasn’t very often. But the retail part of the shop often got in some pretty exocytic sports cars, and the owner of Port Washington Motor shop owned a 1965 427 Cobra. While I never got to actually drive the car, Peter would take me for rides every so often. Let me tell you when he drove the Cobra Flat out, it was like nothing I’ve ever experienced. And thus I had the actual car of my dreams to ride in. Way better then just staring at pictures in a magazine.

So my 1st build for our GB is the old Monogram 1/24 scale Essex Wire 427 kit, rather then their S/C kit as that’s the kit I have in my stash.

Yesterday I spent several hours focusing my attention on the body shell and hood, which will be able to open & close to see the big block Ford 427 engine. There’s quite a bit of flash that needed to be dealt with, and some major mold seams line on both sides of the body. 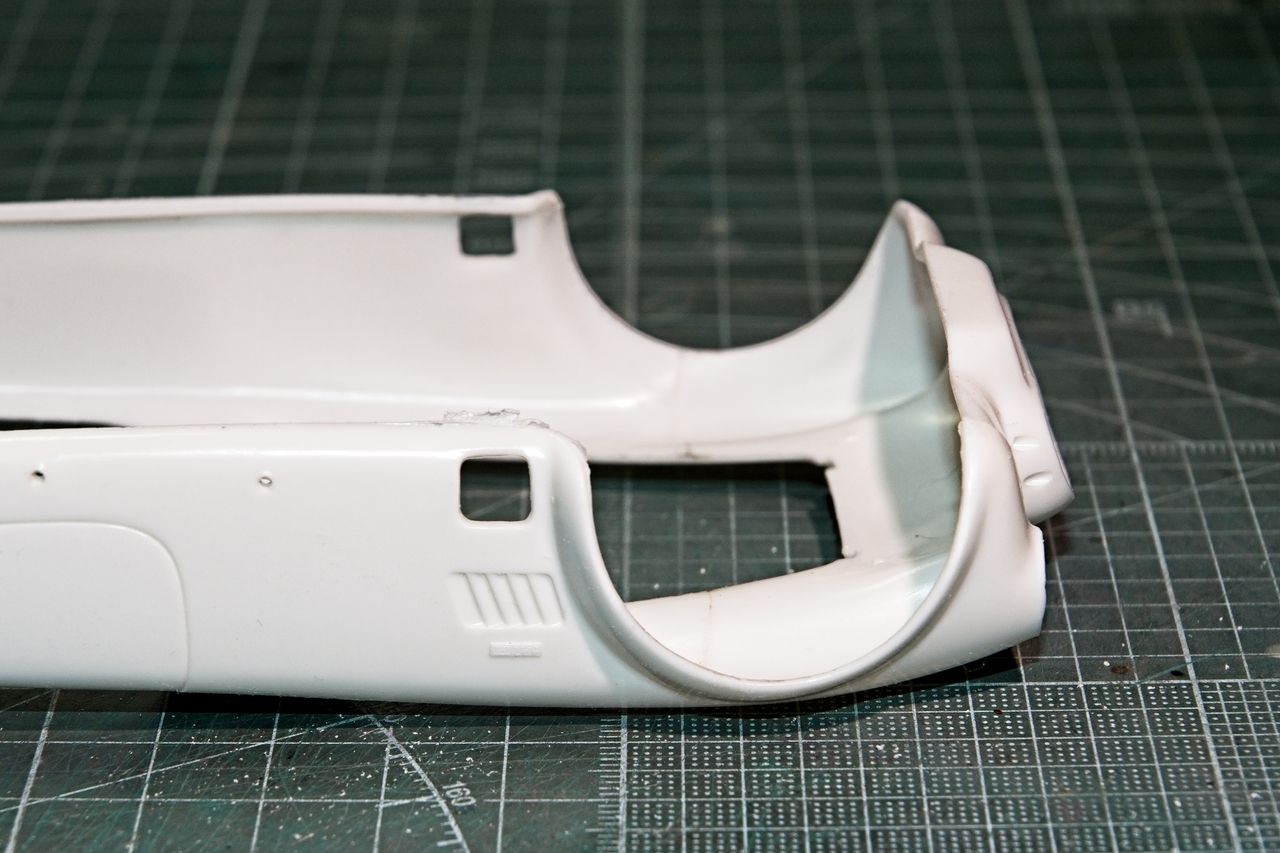 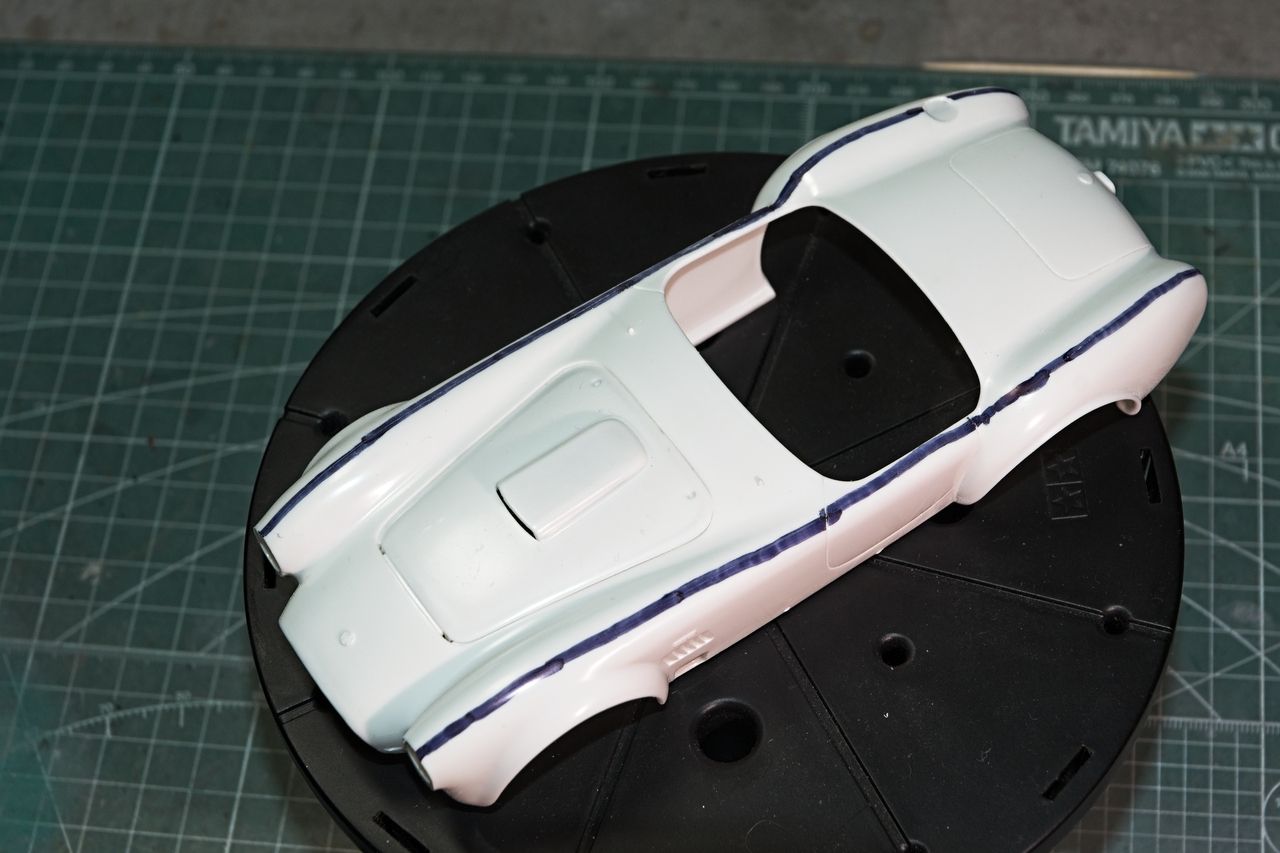 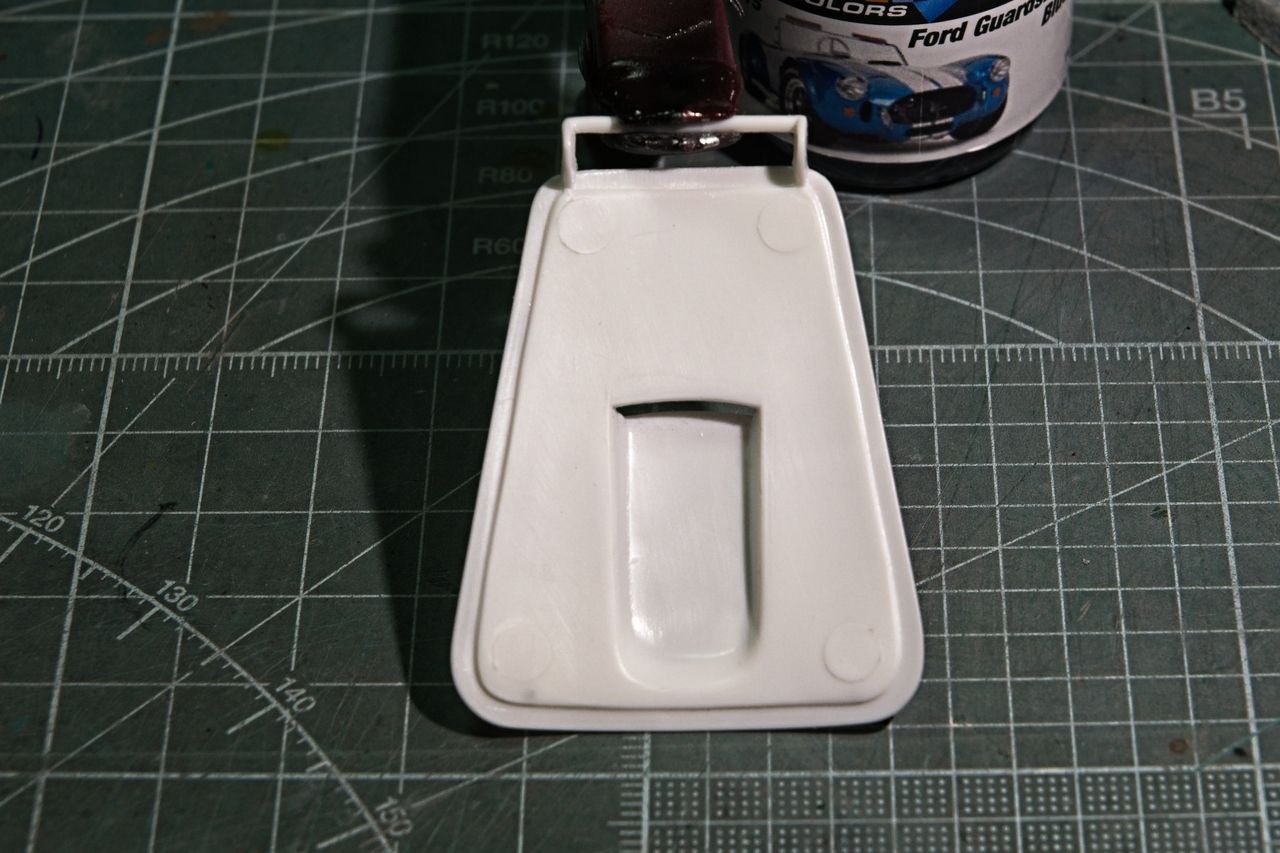 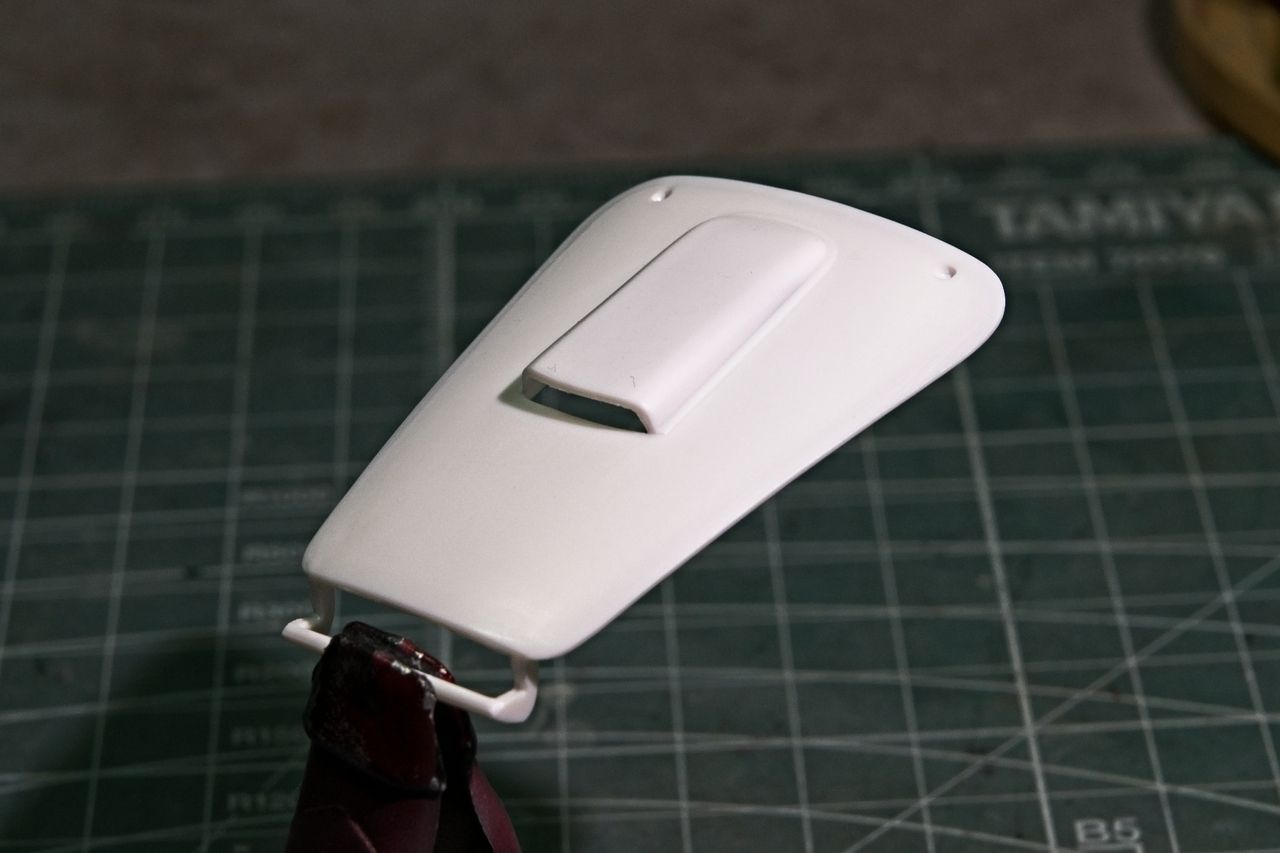 So out came the files and sand paper, and I thinned it down. Final clean up is still needed in this close up picture. 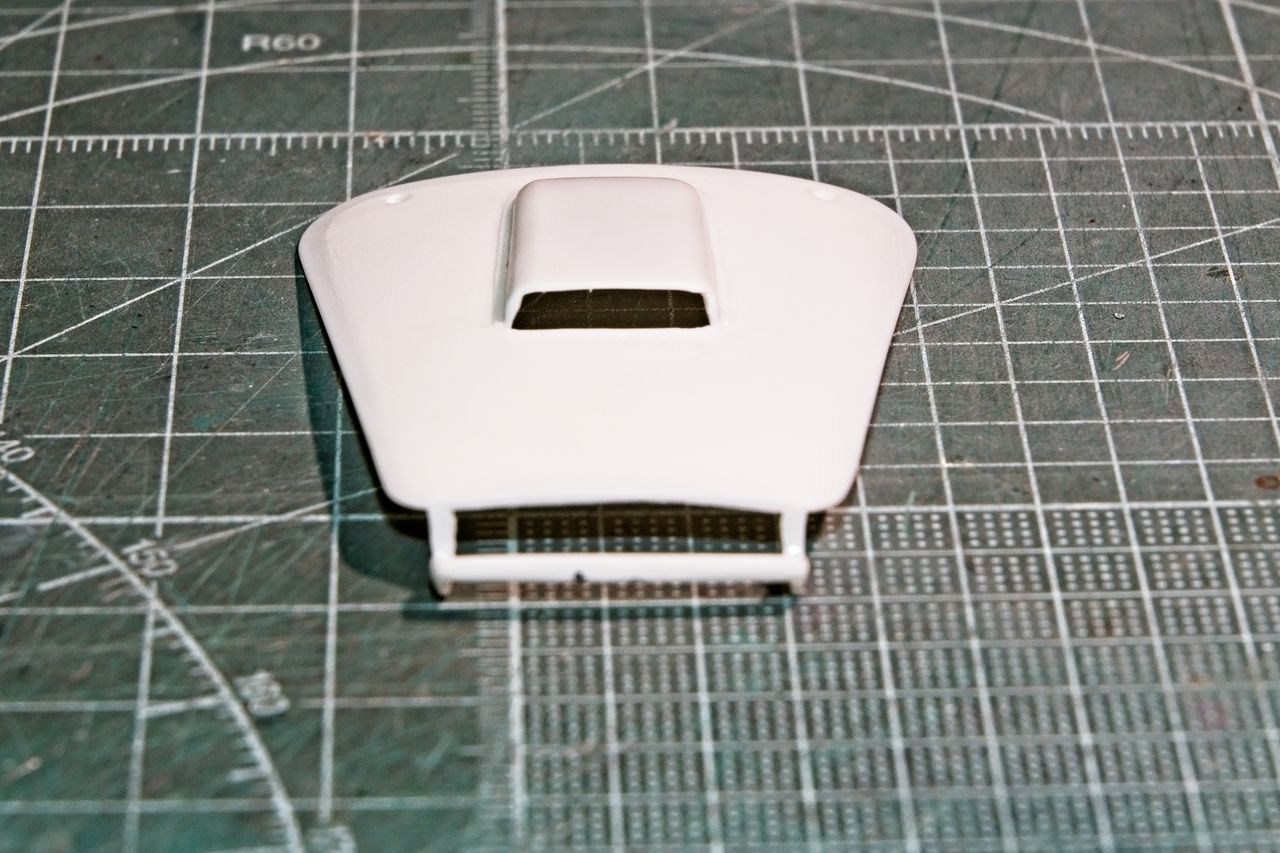 Next up was priming both the hood and the body with Gunze #1500 light Gray primer thinner 2:3 with their #400 Leveler Thinner. 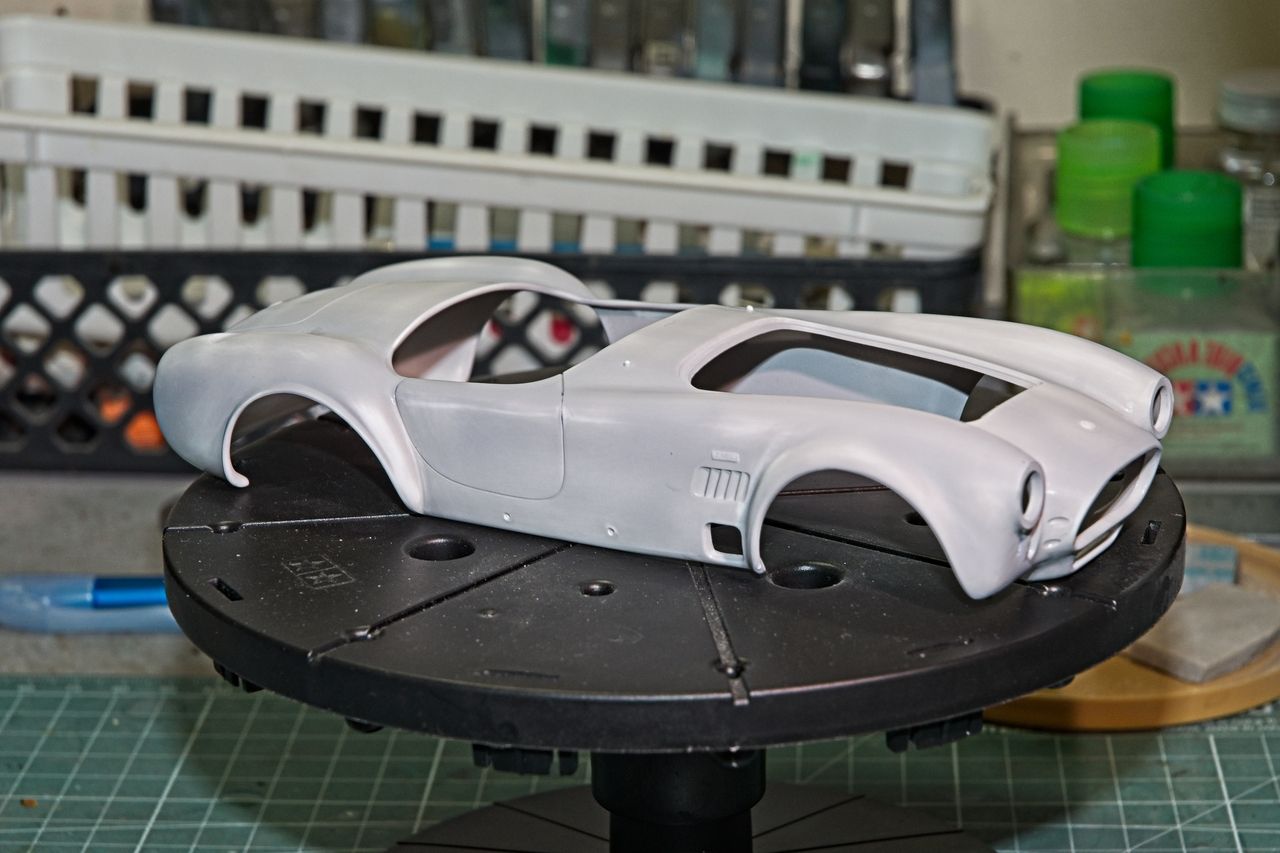 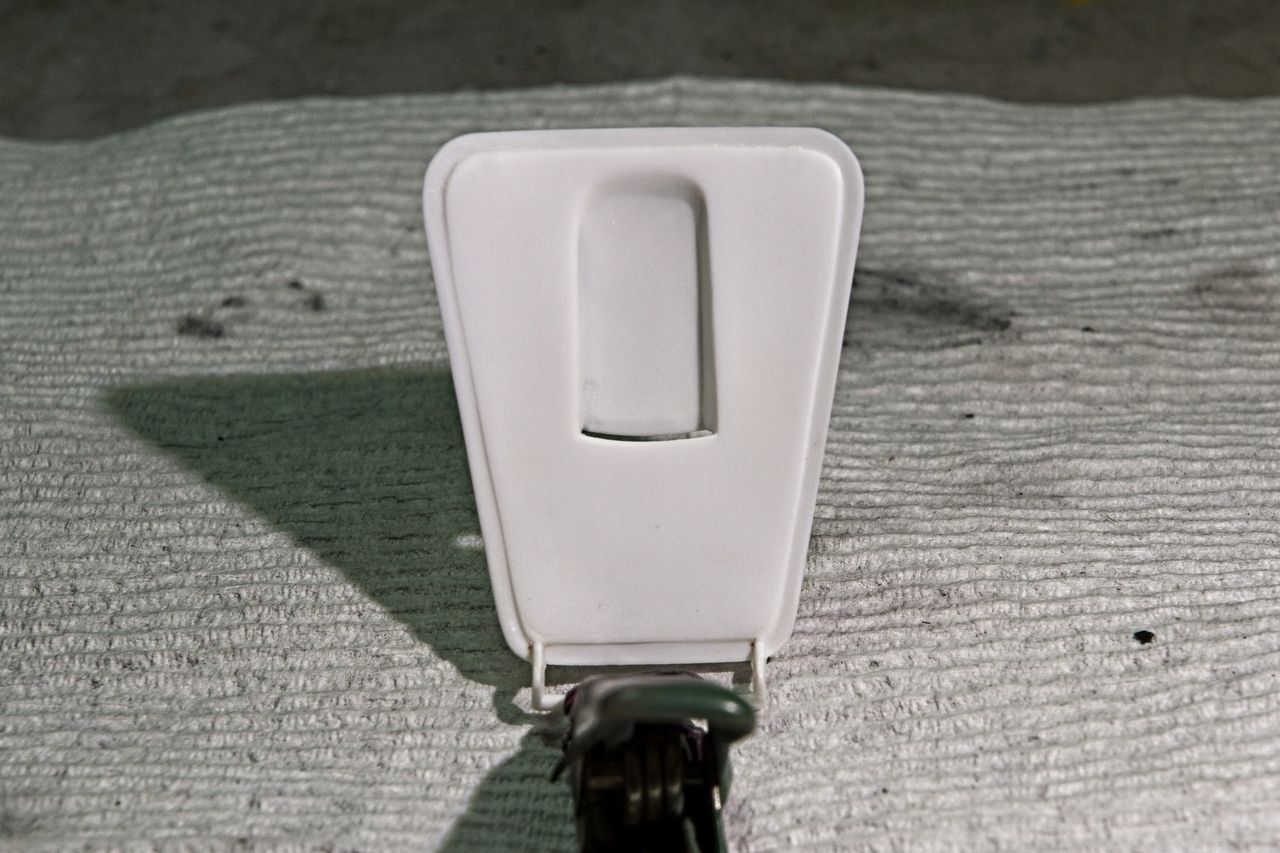 Today I rubbed out the primer with Tamiya #3000 sponge and it’s super smooth. I was going to air brush on the color coat, but it decided to rain today. I really don’t like air brushing when it’s raining unless the A/C is on, which it’s not this time of year. So it will have to wait for another day.

The paint of choice is Gravity’s GC-215 Ford Guardsman Blue, which was one of the factory color options for 1965. 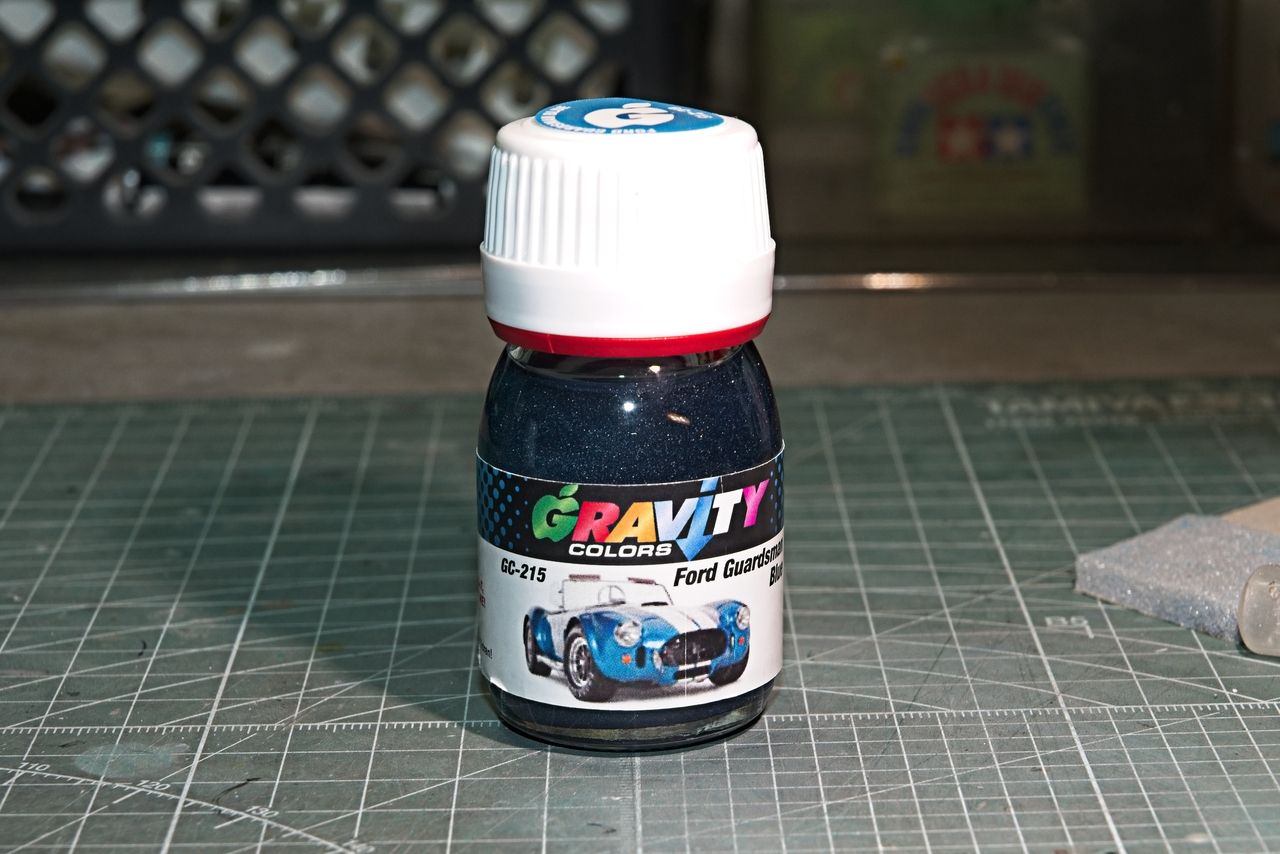 You’ve hit the track quickly here as well Joel, great progress getting the shell tidied up and primed already!

I picked up the Zero Paints “Cobra Guardsman Blue” a while back, it’s a beautiful rich tone for sure.

Wow, you two are really moving on these builds. Looking great the both of you.

“Dreaming” to get a start in the next day or too between final detailing on the semi truck.

Going to be starting with the 05 GT first then the Stang.

D & David,
Thanks for checking out my Cobra build. Still doing research as to the range of paint options with or without racing stripes offered from your local Ford dealer back in 1965. 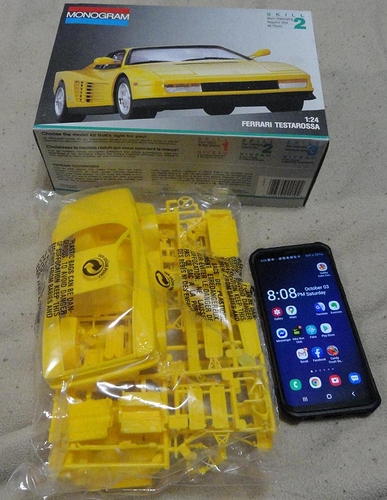 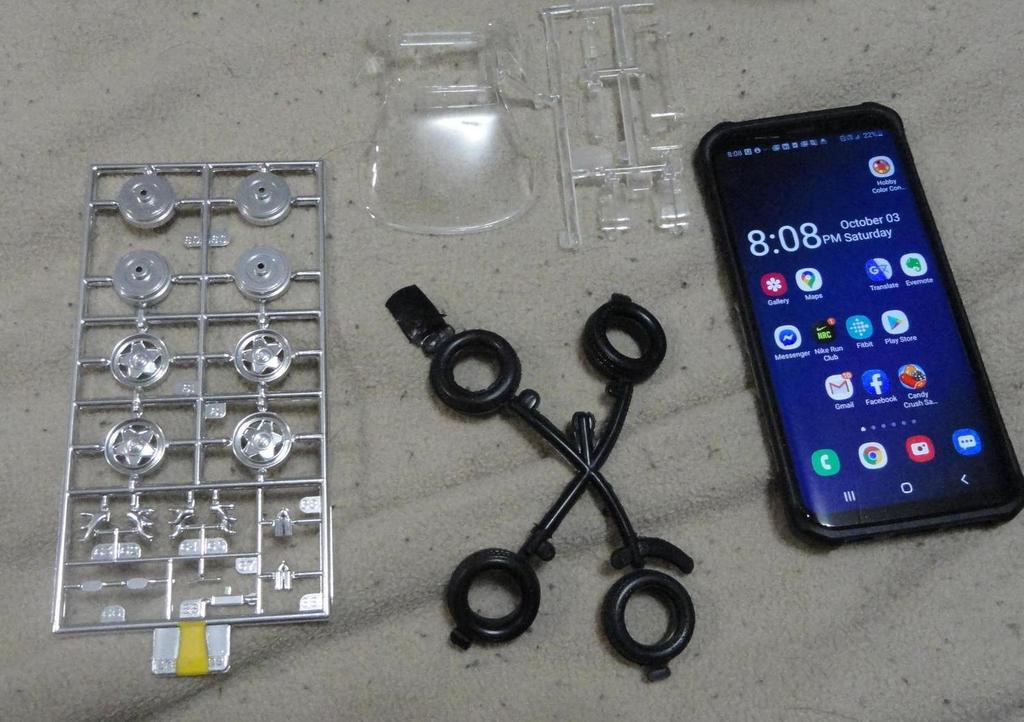 Now the silly questions begin. There’s acres if screaming yellow plastic, that has to be prepared for Italian red enamel. Should I go with a standard white primer or start with something like Vallejo’s Red Oxide primer? :-H

Nice looking kit there Mark, looking forward to seeing it come together!

A good white primer should have plenty of opacity to cover that yellow, and provide a solid base for the Italian Red enamel. I would just build it up with 2 or 3 light coats to get good coverage.

Mark,
One of my favorite late model Ferraris. Looking forward to following your build. Are you planning on staying with the Yellow color? Certainly an eye catcher from the standard Ferrari Red colors.

Apparently screaming yellow is an official Ferrari color. But it’s the only one in the stash so it’s gotta be red. :-H
Mark

Mark,
Yep, from the little I actually know about Ferrari’s, Yellow, Black, Silver are other popular colors these days.

Just as a side note, have you decided on a ribbon as yet for the GB?