Now that the Takom 48 kits are out, it’s a perfect time to drag out a Tamiya kit and build it along with a Dragon kit, right? I thought so too. The Dragon kit will be built nearly OOB with the exception of the road wheels, and I’m using as much of the AM stuff I have in the stash as possible on the Tamiya kit and doing as many fixes as I can handle as well. The Dragon kit will probably be built as IDF since I have some good stuff hanging around for that, while the Tamiya kit will most likely be built as Army, in Vietnam, since I’ve had a knock-off of the Legends turret sandbag stack laying around forever that I want to use.
First, the Tamiya kit: I had a turret started from a long time ago, with a Barrel Depot gun tube already in it and the mantlet cover finished out with Aves putty, so that got the sandbags. It’s really weird resin, stuff that I bought a some show ages ago with no instructions. Fit was okay, I just had to fix the track links it’s supposed to be supported by. The basic hull was also together, with extra holes plugged. 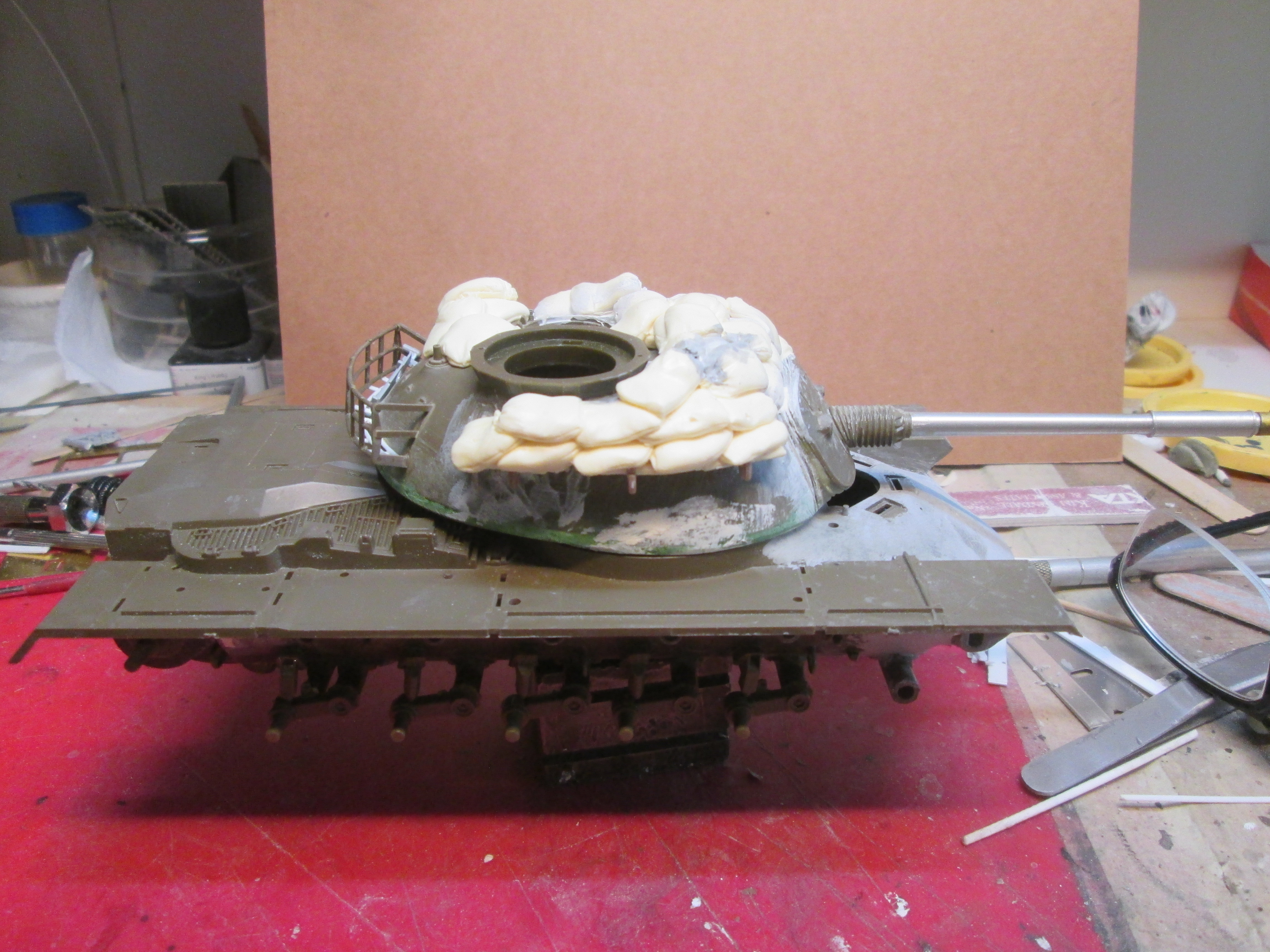 IMG_3837 by Russel Baer, on Flickr
Then there’s the profile of the nose. I built it up using Aves (good stuff) and tried to copy the Dragon shape and pics. MrSurfacer went on after I got the basic shape. Pic is comparing the unmodified Tamiya shape and where mine is currently. It looks asymmetrical in the pic due to camera angle. 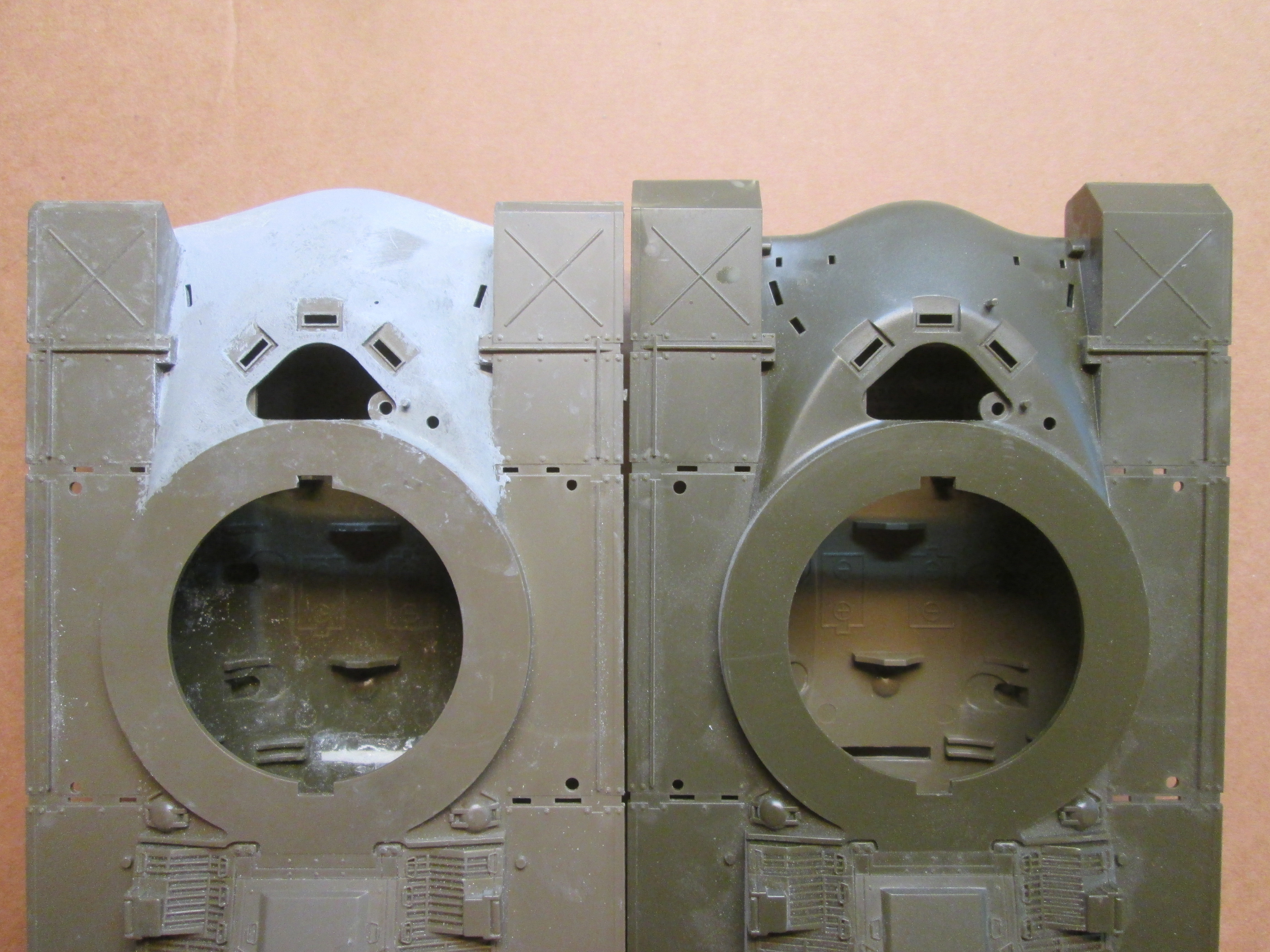 IMG_3834 by Russel Baer, on Flickr
I’m “lowering” the suspension a little more than I would normally since the pics I have of the tank with all the sandbags piled up shows the effect of all the extra weight- it looks like a low-rider. I’ve also got all the big locator holes filled on the hull rear, the hull set up to take a Dragon engine door part and the rear profile rounded a bit. Tamiya’s rear is too vertical and deep, probably to fit batteries and a motor. I’ll fudge things a bit here to make it look better. 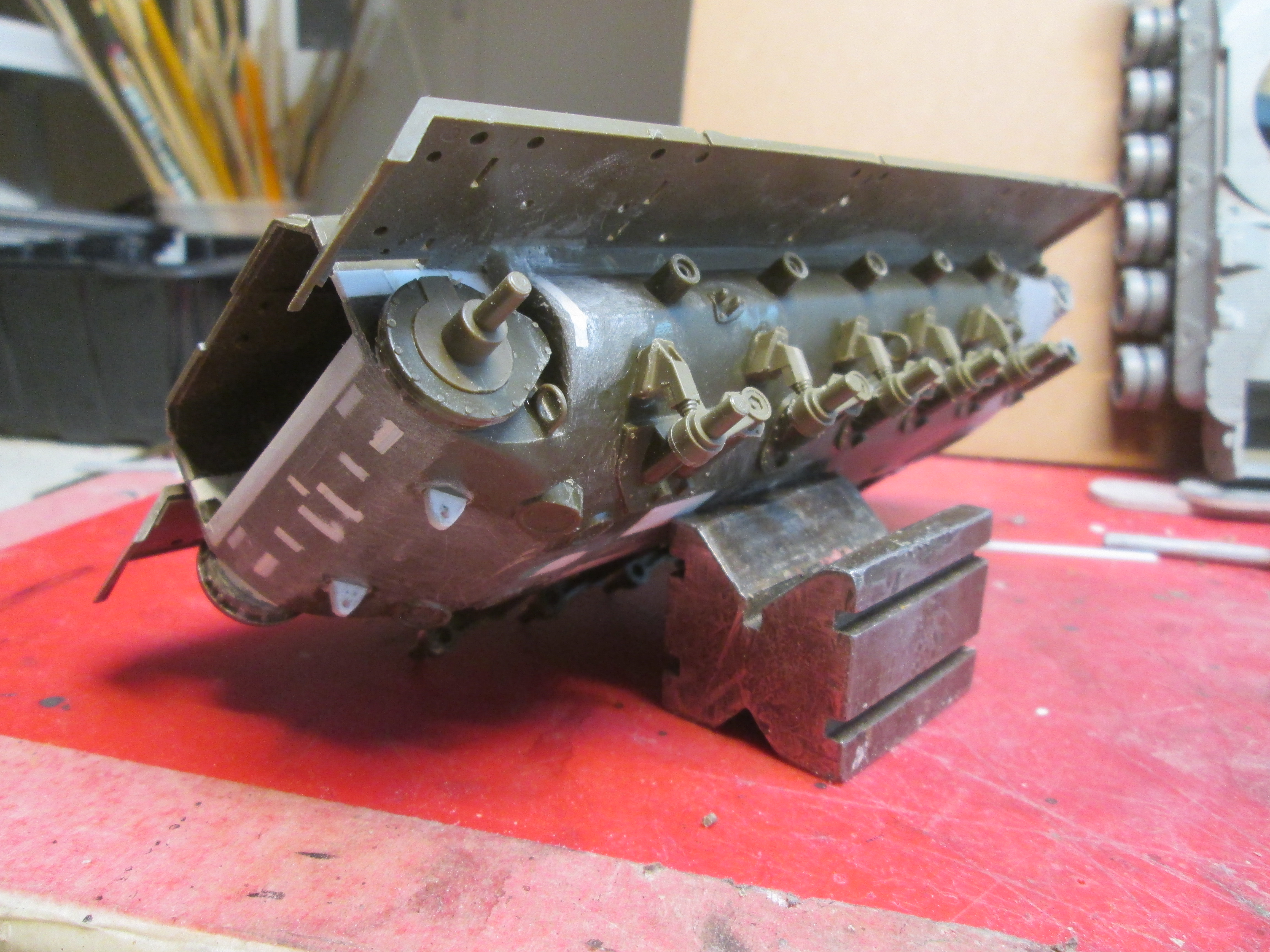 IMG_3836 by Russel Baer, on Flickr
I have a bunch of loose parts from another Dragon kit that I’ll use for detail bits on the suspension. Not sure about which road wheels I’ll use here yet.
The Dragon kit is going together nicely along side this, partly so I can copy detail bits onto the Tamiya kit. It’s been thoroughly reviewed here and elsewhere, so all I’ll say is I’m using Takom wheels since Dragon skated and missed the rim detail. 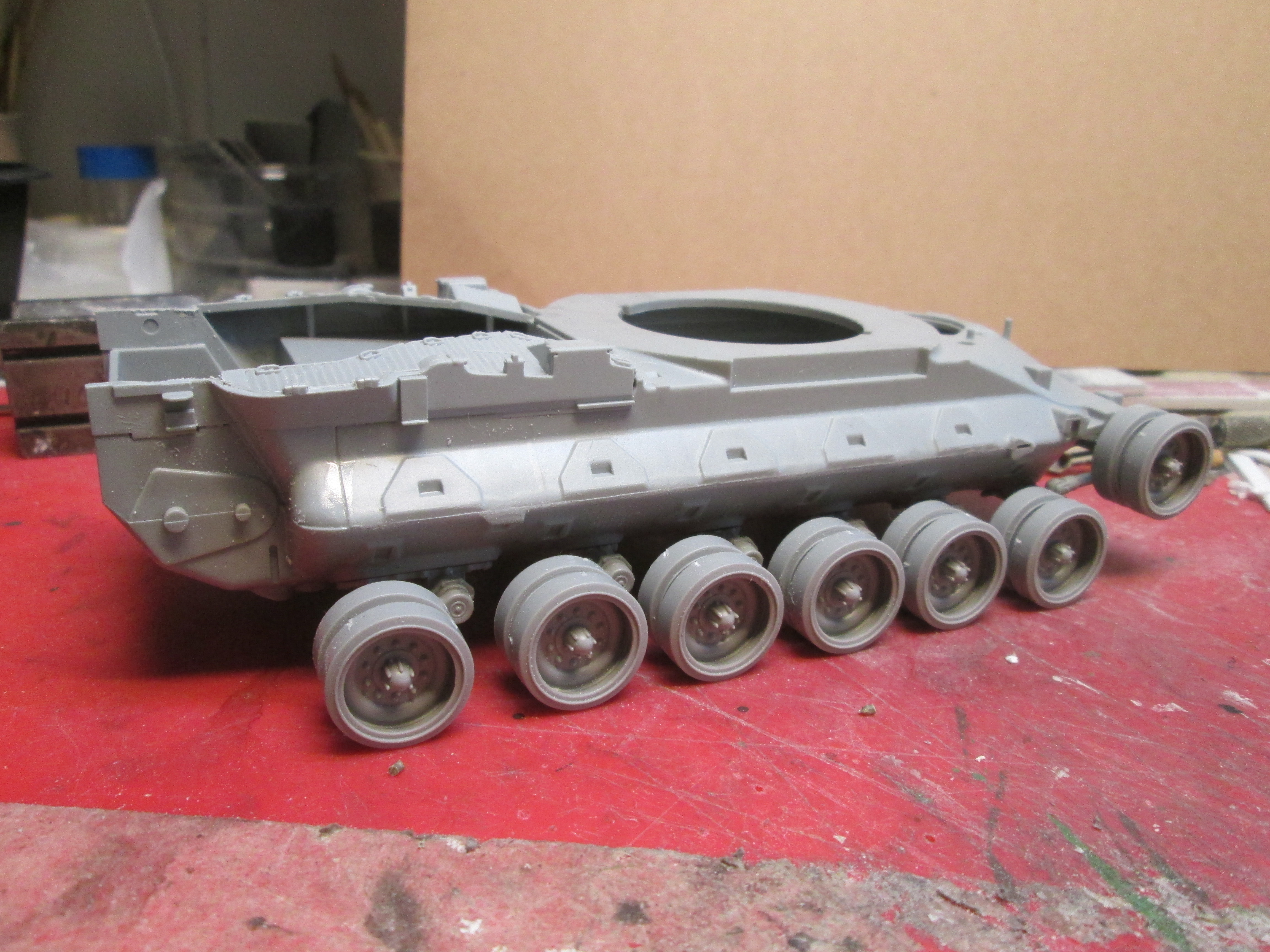 IMG_3838 by Russel Baer, on Flickr
I’ve had a couple of the Tamiya kits in the stash for years, and just bought the Dragon kit last week for a very friendly price from a vendor’s table next to another vendor with a stack of Takom M48’s. Perfect.
And just for giggles, the Dragon nose compared to my modified nose. Which seems closer? I’m unsure, pics from above are hard to come by and all the drawings I have show what looks like the Tamiya kit. 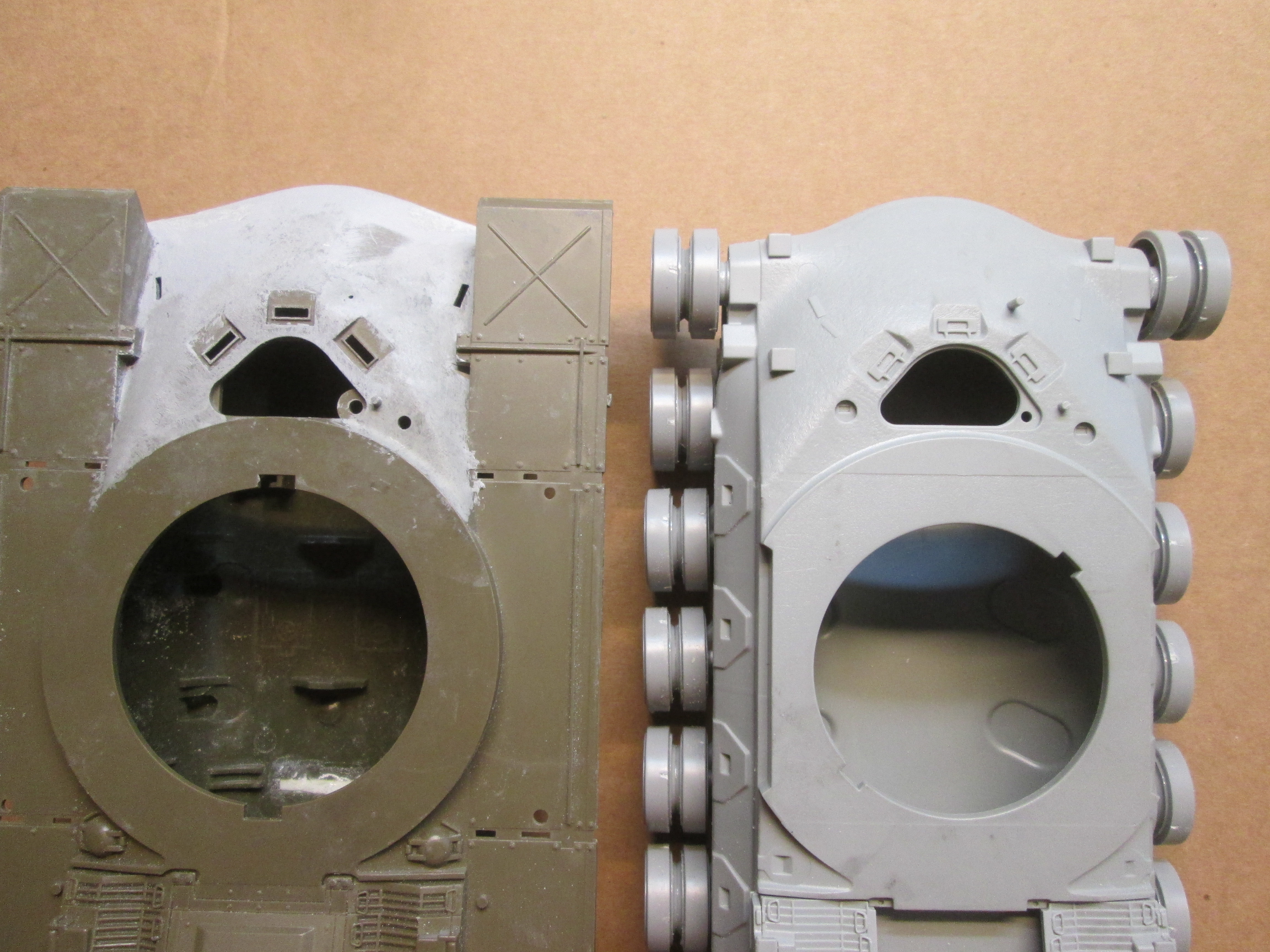 Nice start Russ and something a bit different. Will tag along …

I am down for this, following along.

I’ll be following along, too.
The Dragon M48 and M60 kits have great detail although the way the return rollers attach to their mounts on the hull always gave me heartburn.

You have already glued the hulls together, but a way to match the profiles is to trace the DML upper nose onto plastic card, with a landmark like the idler wheel axle location. Place the card under the Tamiya upper, aligning it to the same landmark, and trace the Tamiya contour. Cutout along the traced lines and glue it to the assembled Tamiya hull as a former for puttying.

As I recall, the Tamiya nose needs to be sharper but the contour back from the nose is OK. In other words, it is as if Tamiya made the correct contour, but ground back the “beak” to a much blunter radius, like the red line: 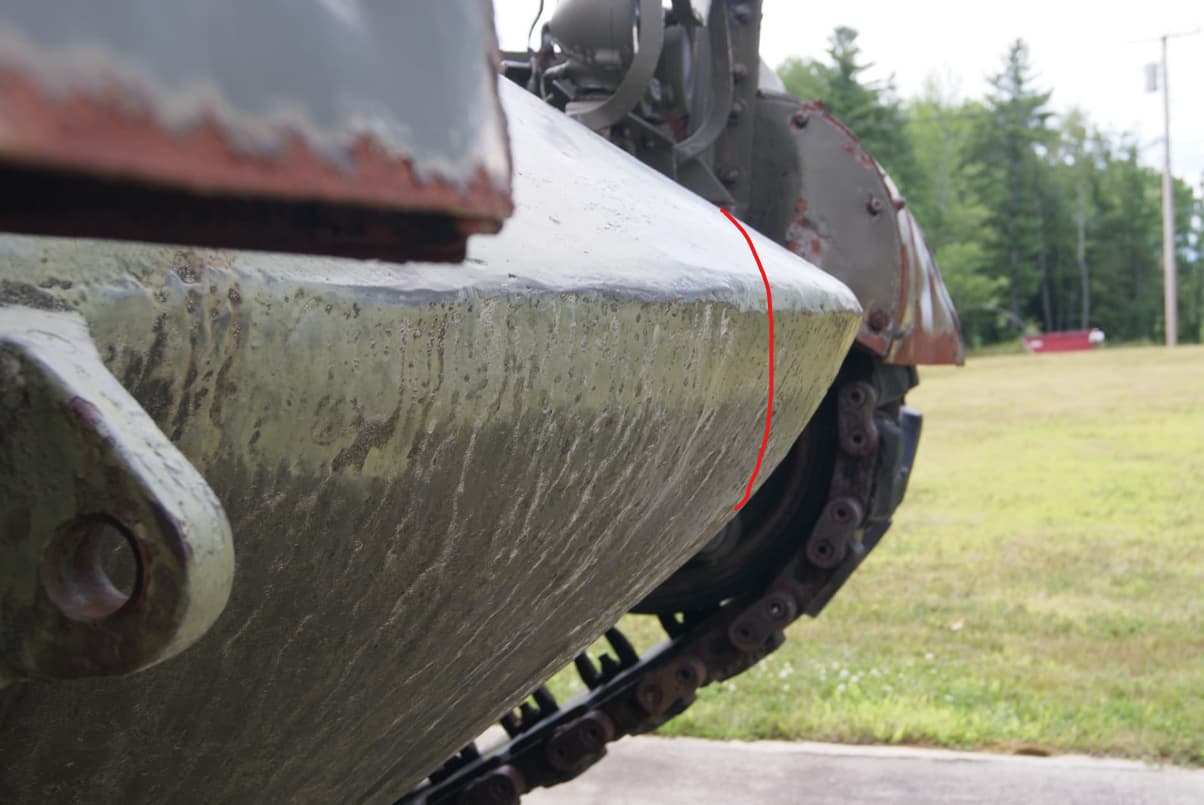 Thanks all. I have worked the nose a bit more, but making a template is a good idea, thanks! I have the front edge sharper, as in the pic above, still working on the curvature.
In the meantime, I’ve started the rear hull on the Tamiya kit, using a spare dragon rear engine door part. 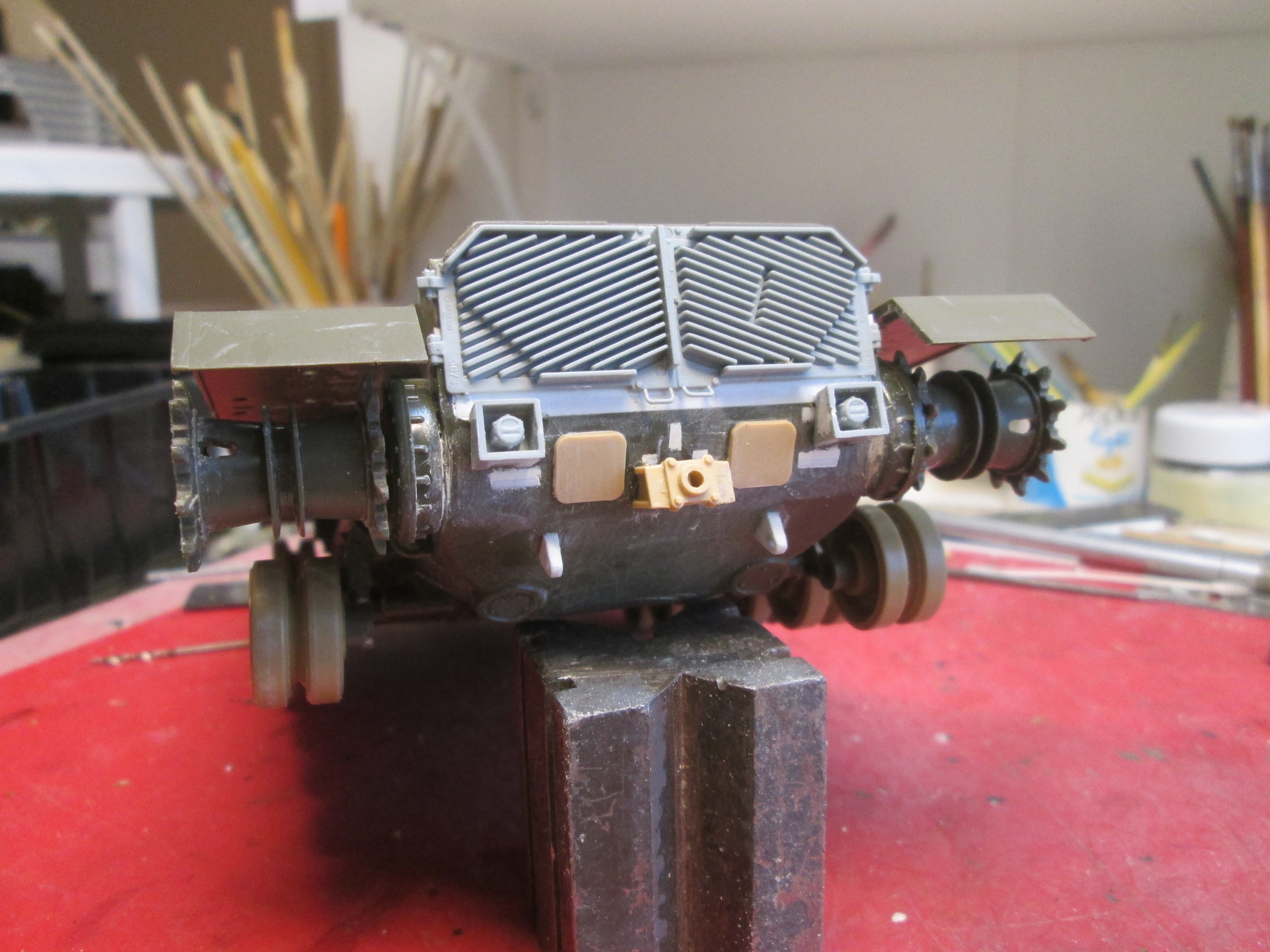 IMG_3839 by Russel Baer, on Flickr
since the Tamiya hull is deeper and angled differently, I added a filler and spaced the detail parts to match, based on the lower edge of the engine doors.

Nice update Russ, some good additions being put in here.

Tamiya nose getting closer. The fenders cover the areas I’ve done the most work on. 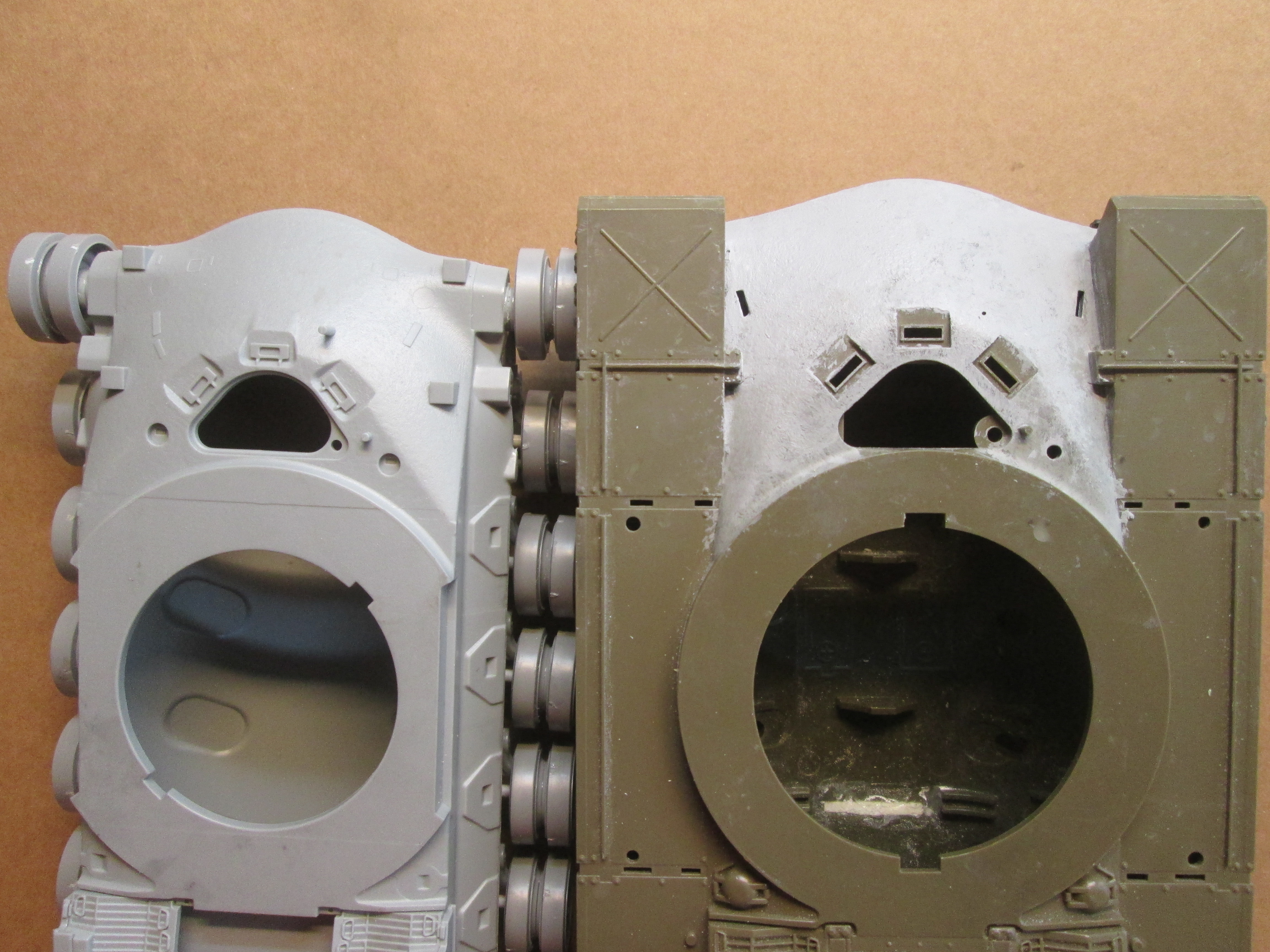 IMG_3842 by Russel Baer, on Flickr
And as an experiment, I tried cutting reliefs into a spare set of Academy roadwheels, just to see if it would work. It’s kind of hard to see here but it does improve the look of the rims. 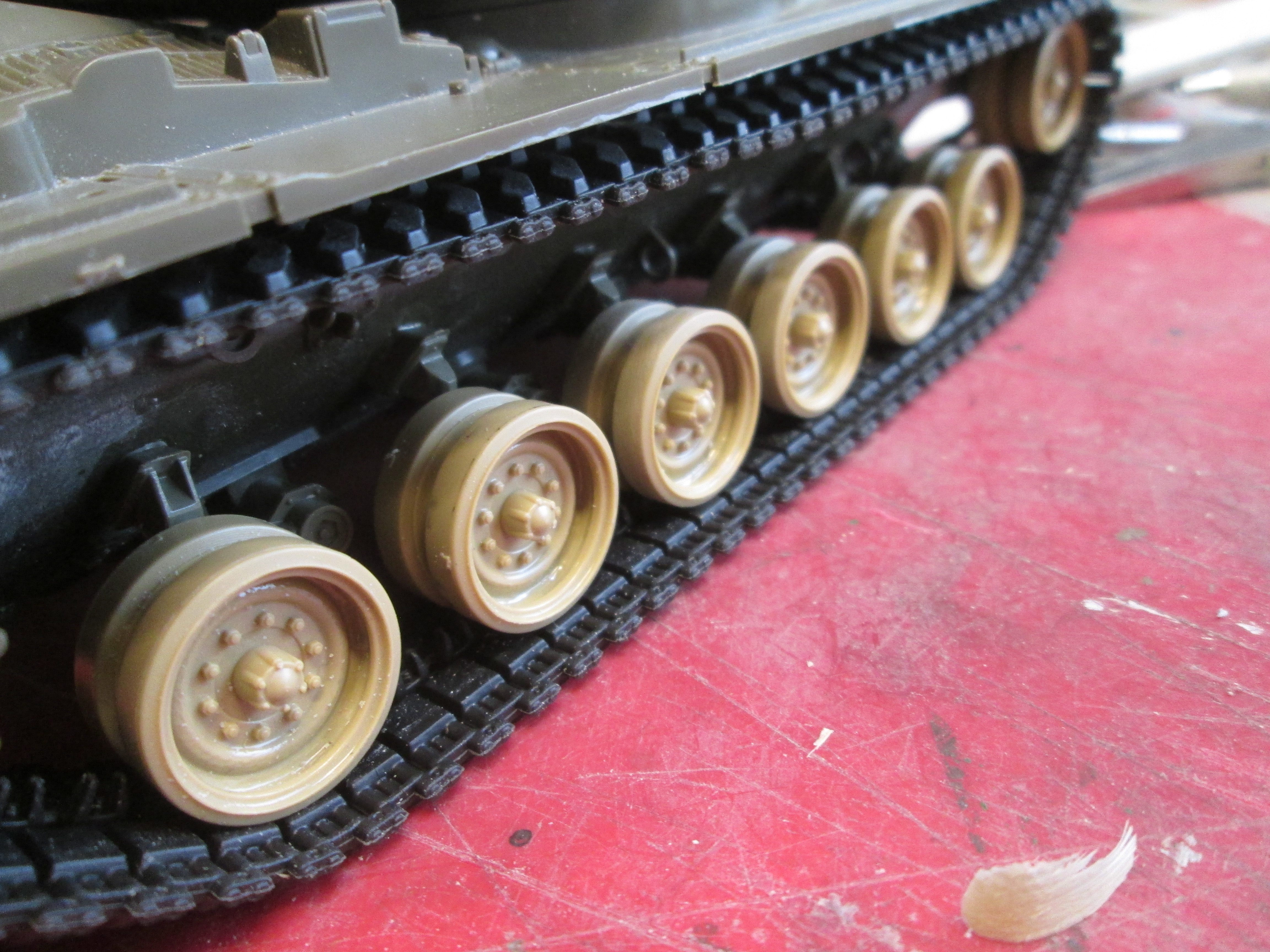 IMG_3841 by Russel Baer, on Flickr
A word on the tracks: pictured are the DS (or not) tracks that came in the Dragon kit. Obviously, they’re black, different than the yellowish color used previously, and they are unaffected by regular styrene cement- I had to use cryo glue.
And the rear, almost ready for the brake service covers: 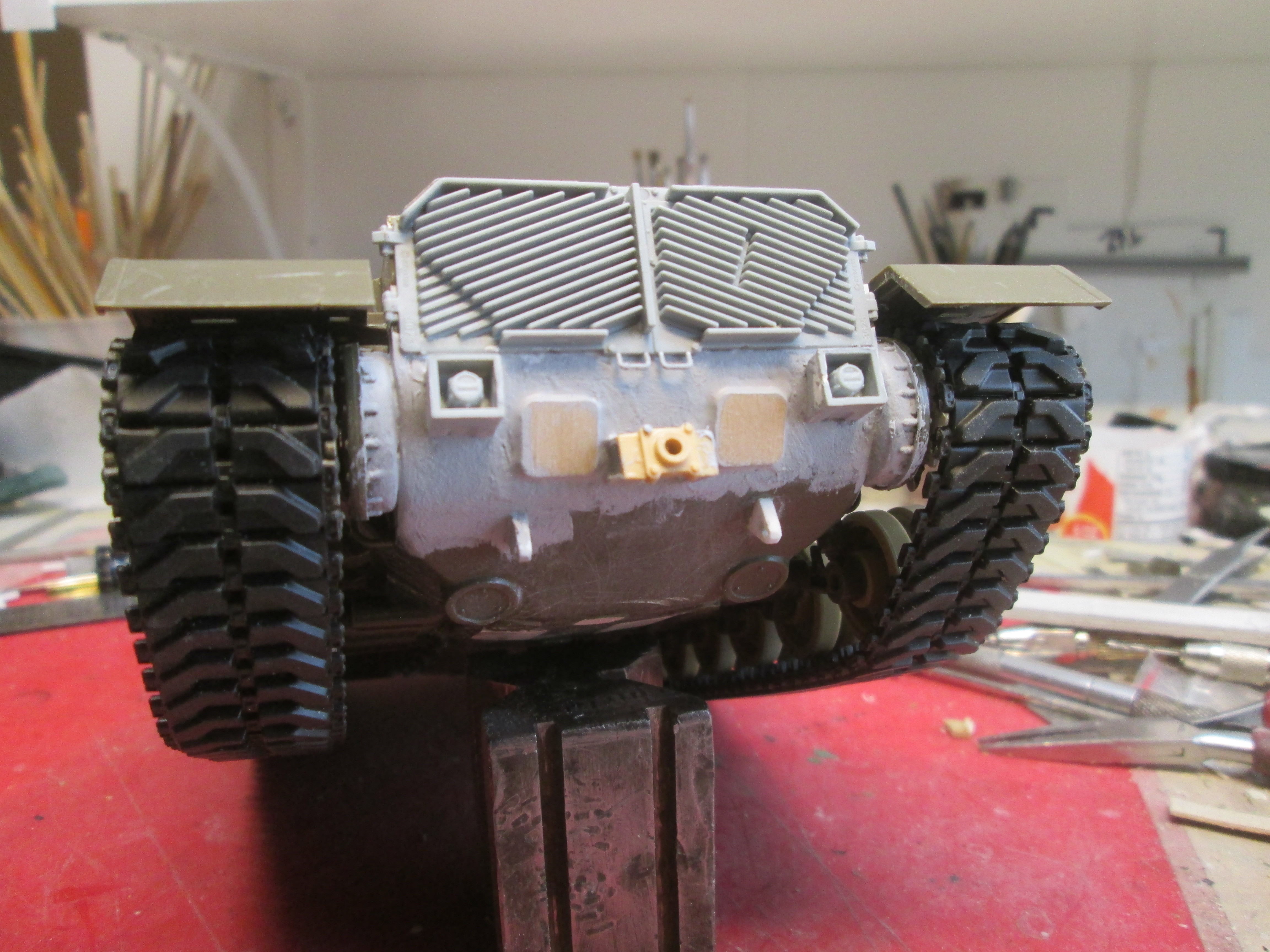 IMG_3843 by Russel Baer, on Flickr
I also need to add the small round access cover (?) in the center below the engine doors. I’d never noticed it until I saw in on the Dragon parts, then checked pics to verify its presence.

I got a Das Werk Bundeswehr M48AVLB kit a while back for a song.

The DW kit is just a re box of the Dragon M48AVLB kit with some extra parts for the Bundeswehr conversion.

It also had black chevron tracks. I assumed this was a DW thing, but I guess not.

It was a pleasant surprise.

What’s the most effective way of removing the flash from those vinyl tracks? Every time I try sanding, the material “balls up” and tears.

Vinyl tracks go to this place: 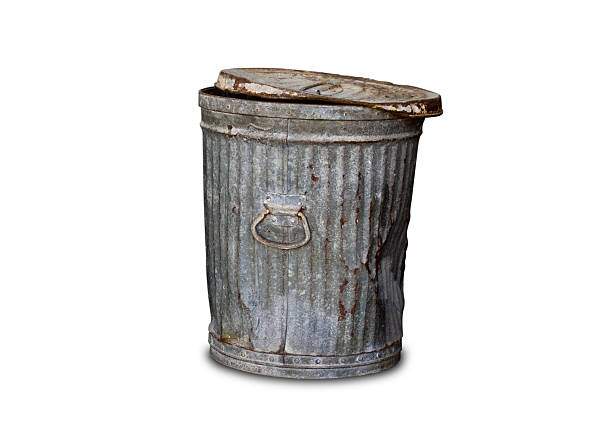 With a new scalpel blade and a lot of patience…

Sometimes a little MEK brushed on to the flash makes it go away. If the tracks are really vinyl and have flash, in the round file with 'em.

I’m happy with the hull front now, moving on. 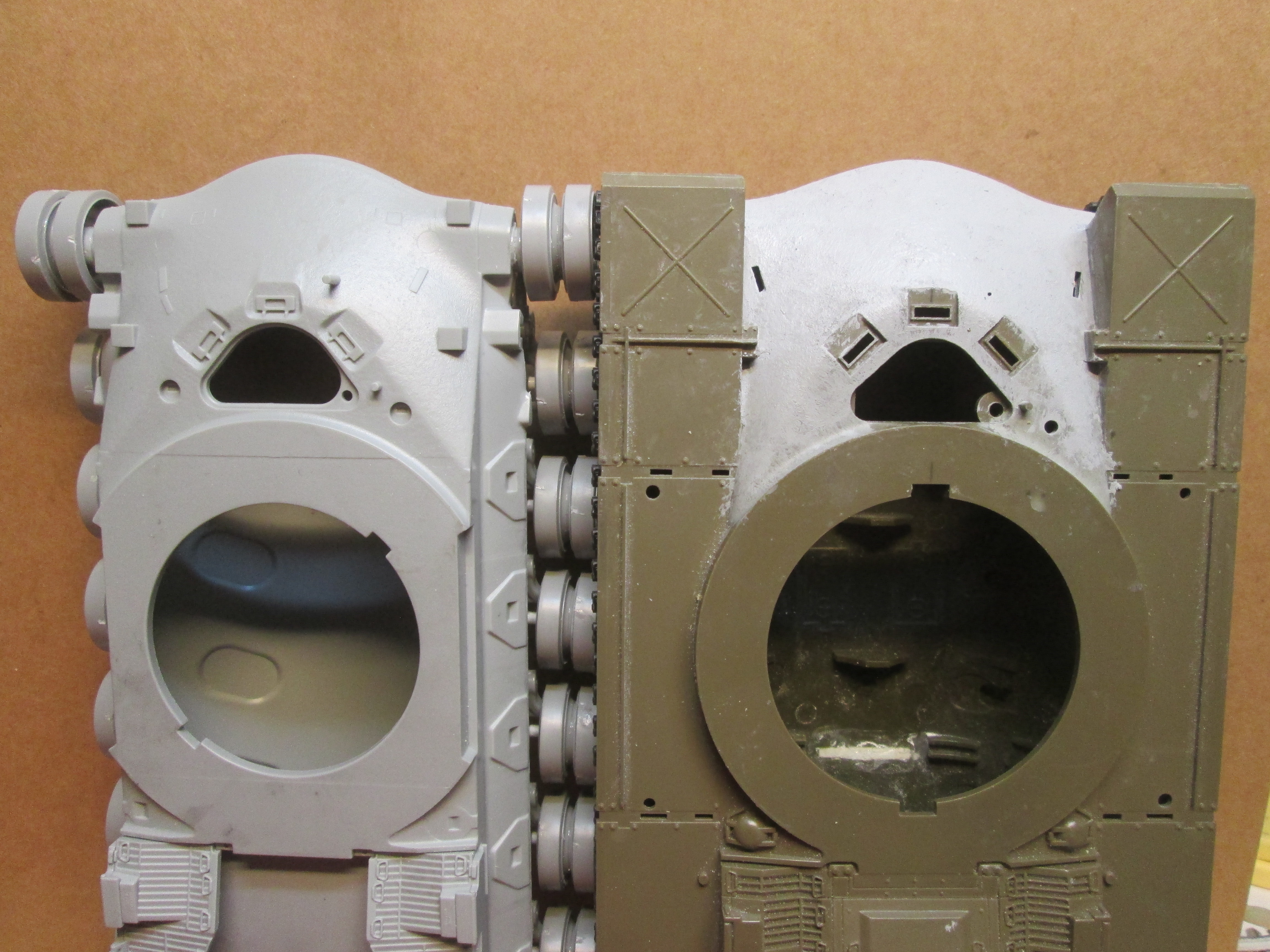 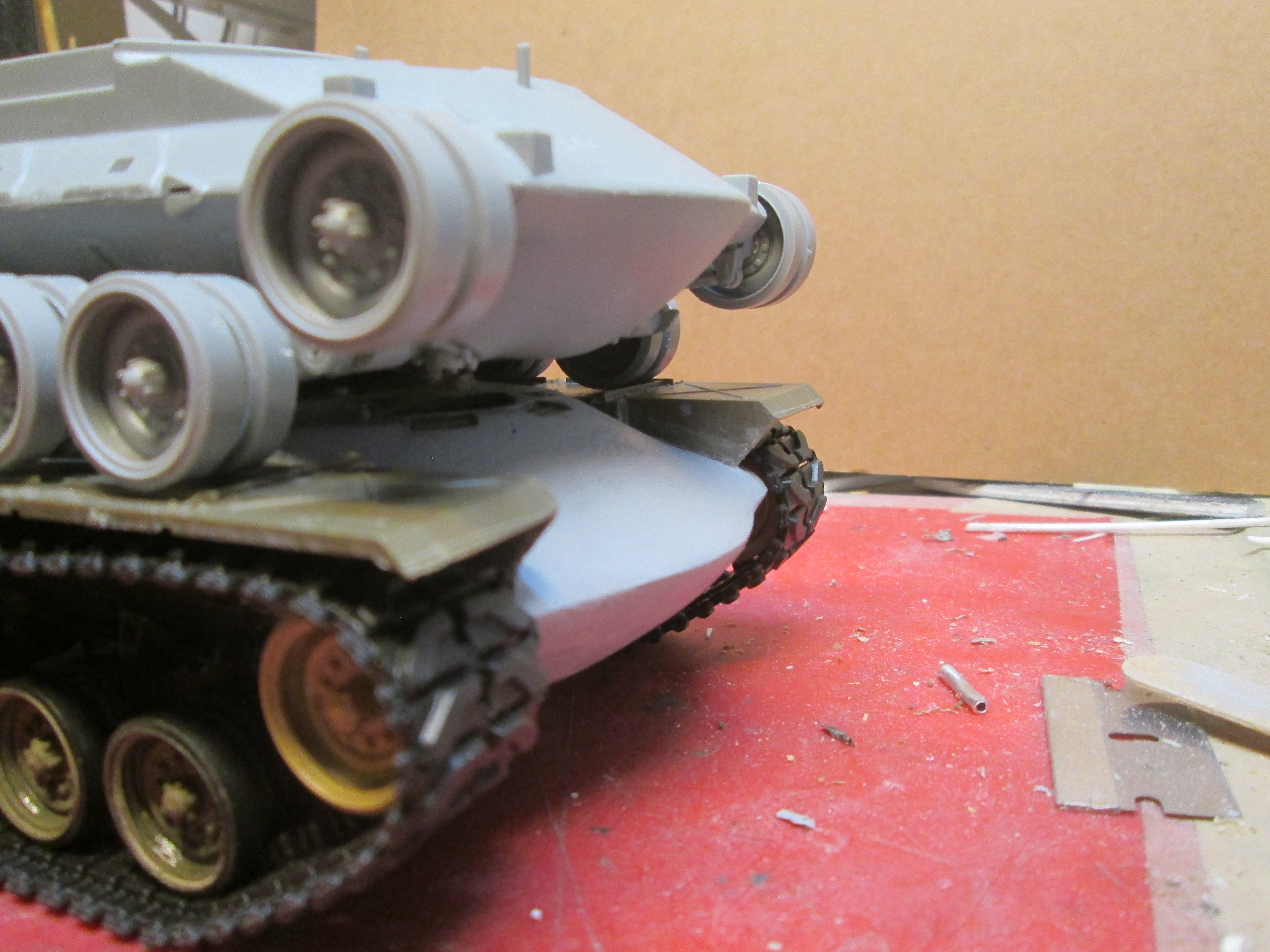 Well done on the final nose profile. Bob Hope would have approved!

You’ve done a cracking job with the finish on that Russ… Looks perfect.

I just found this topic and am highly interested in this conversion. So, I will follow along!

I committed, something I’ve heard I have issues with, on the Dragon kit. I’ll be using the DEF Magach 3 set on it, but with a Takom Urdan cupola which happens to fit the Dragon turret perfectly. With a Tamiya “turret ring” on the Dragon cupola, I have a better TC’s cupola on the Tamiya kit too.
The Dragon kit is ready for fenders, and the Tamiya kit is ready to have the fenders beat up. I’m not sure if I’ll cut the kit fenders off and start over or just thin and tweak them. 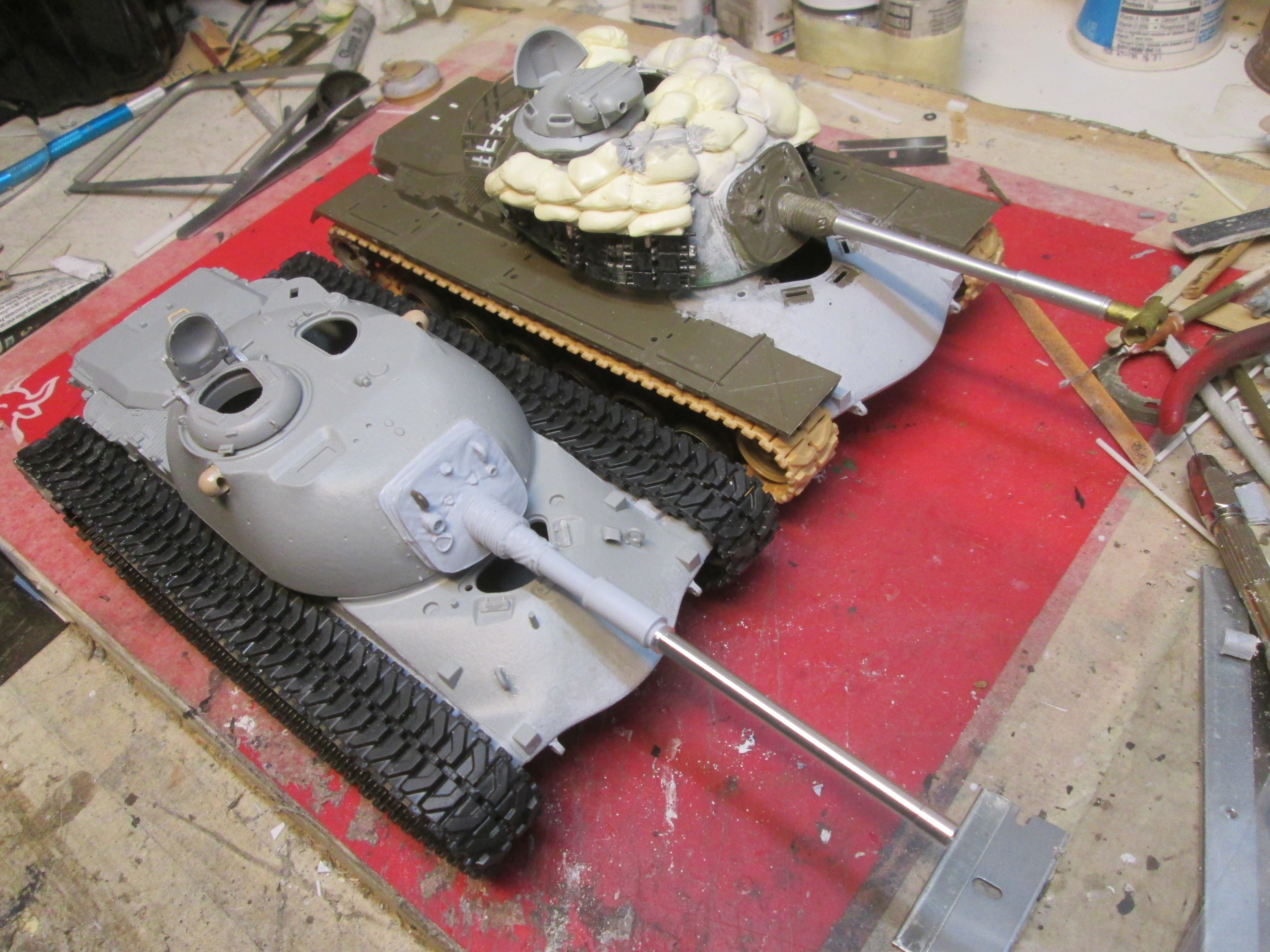 IMG_3851 by Russel Baer, on Flickr
Another interesting tidbit: on the same tracks, even after collapsing the Tamiya suspension 3-4mm, the ride height matches the Dragon kit, assembled “stock”. Looking back, I should have lowered the Tamiya kit another 2mm. 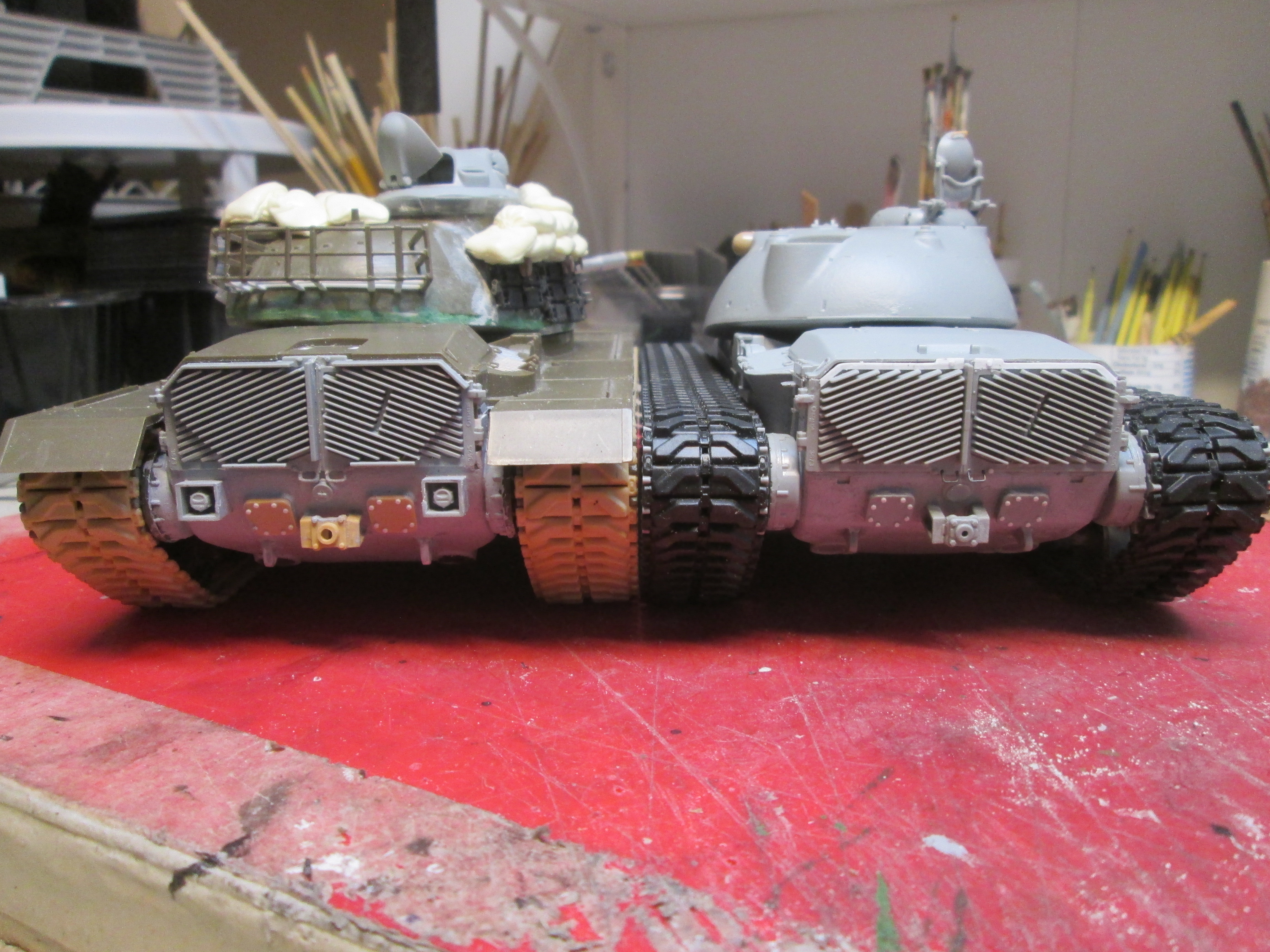 IMG_3852 by Russel Baer, on Flickr
Not mus hof the Tamiya turret shows any more… 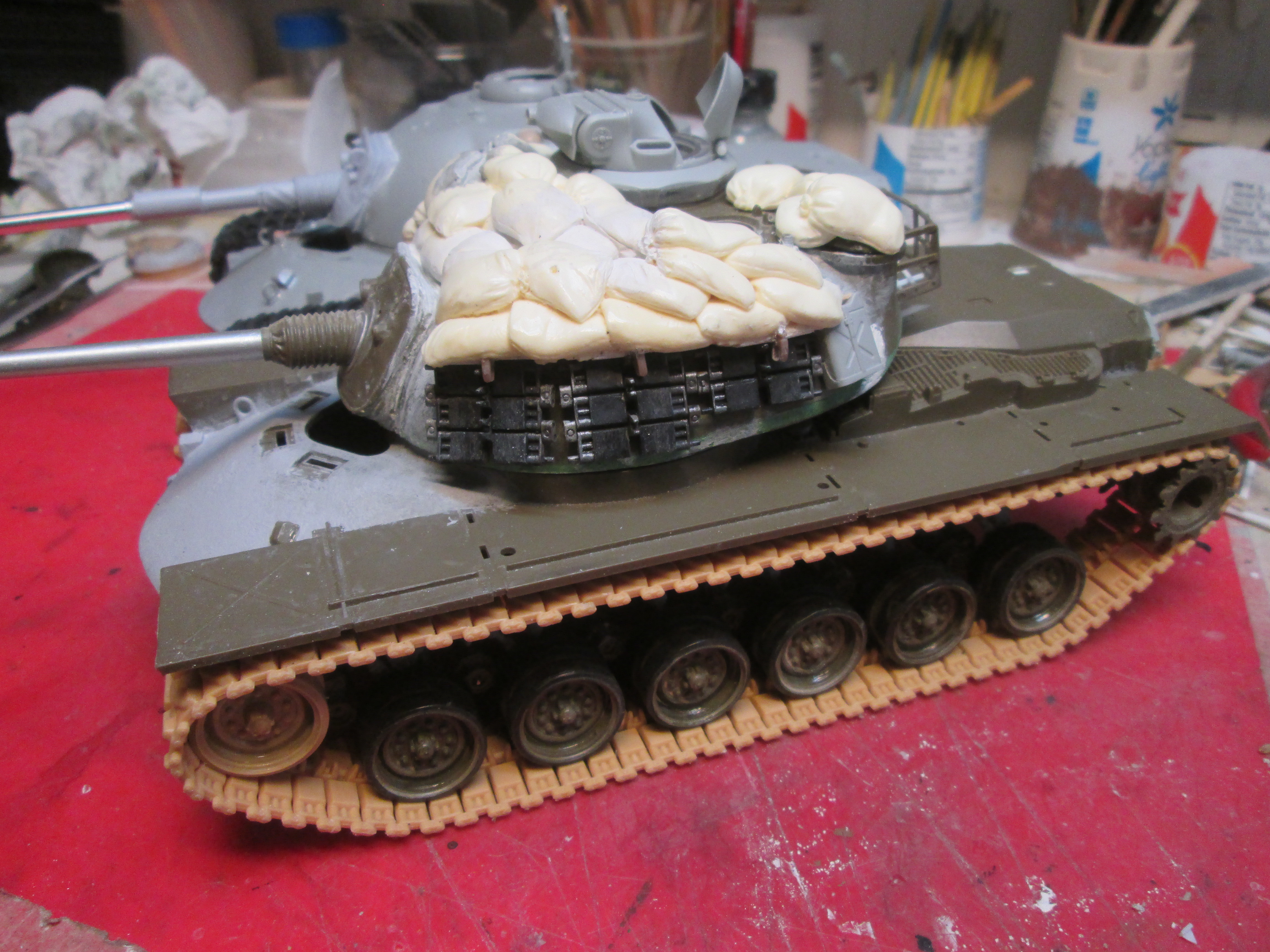