It was “Dora time” again. This time I took Eduard’s “Weekend Edition” for my new D-11.
The kit is a veteran and a little bit tricky when assembling it. I had to do a lot of reworking, especially at the wing root/fuselage transition. But in the end you’ll get a decent Dora.
I really hope that Eduard will also bring out a new “D” as part of the current 190 series.

I built oob with a little own contribution:
-Pitot tube and gun barrels made of cannulas
-Brake hoses, landing gear position indicators on the wings and cables in the weapon bays made of wire
-Photoetched seatbelts
-Slack antenna wire made of pulled sprue

The 190 was painted with colors from Mr.Hobby (Gunze), Mr.Paint and Revell. After a pre-shading, I sprayed the camouflage scheme completely freehand.
For this I used a triplex airbrush gun with a 0.35mm nozzle.
Weathering by a washing with diluted oilpaint. The exhaust plumes were sprayed on.
Everthing was sealed with heavily thinned matt clear coat.

The figures come from the Ukrainian manufacturer ICM.
Unfortunately, in terms of modelling, nothing will come from there in the near future. But these are probably the smallest problems of the people in Ukraine.

The figures were painted with Revell’s Aqua Colors.

My 190 shows the D-11 “White <58” of the Squadron Leader School at Bad Wörishofen (Bawaria). Later this Dora served as “Red 4” in the airfield defense unit (“Sachsenbergschwarm”) of the JV44. 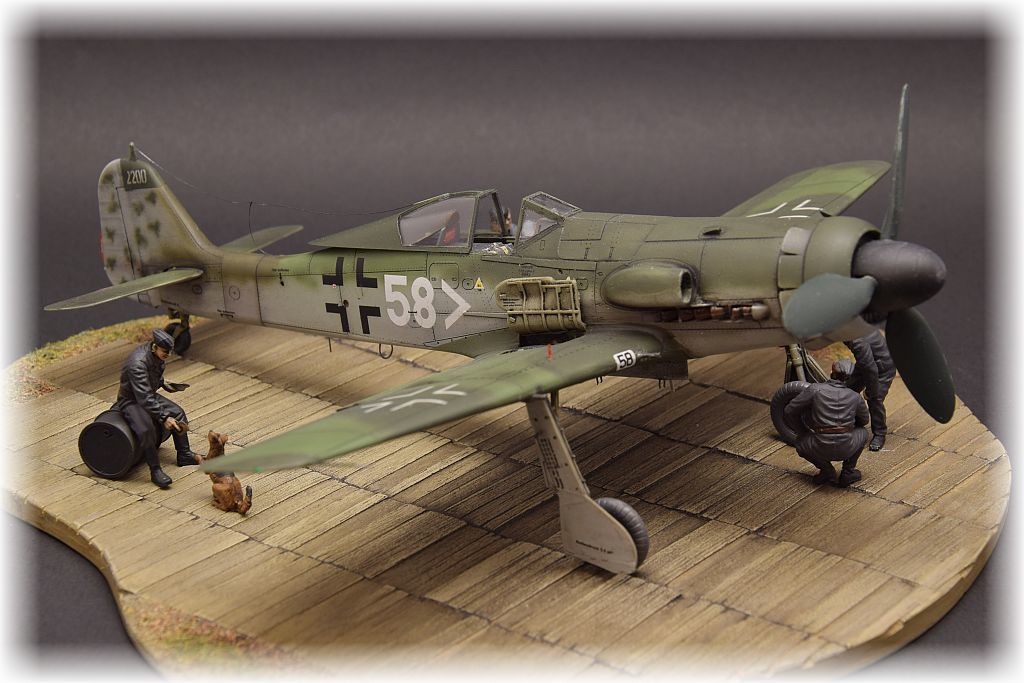 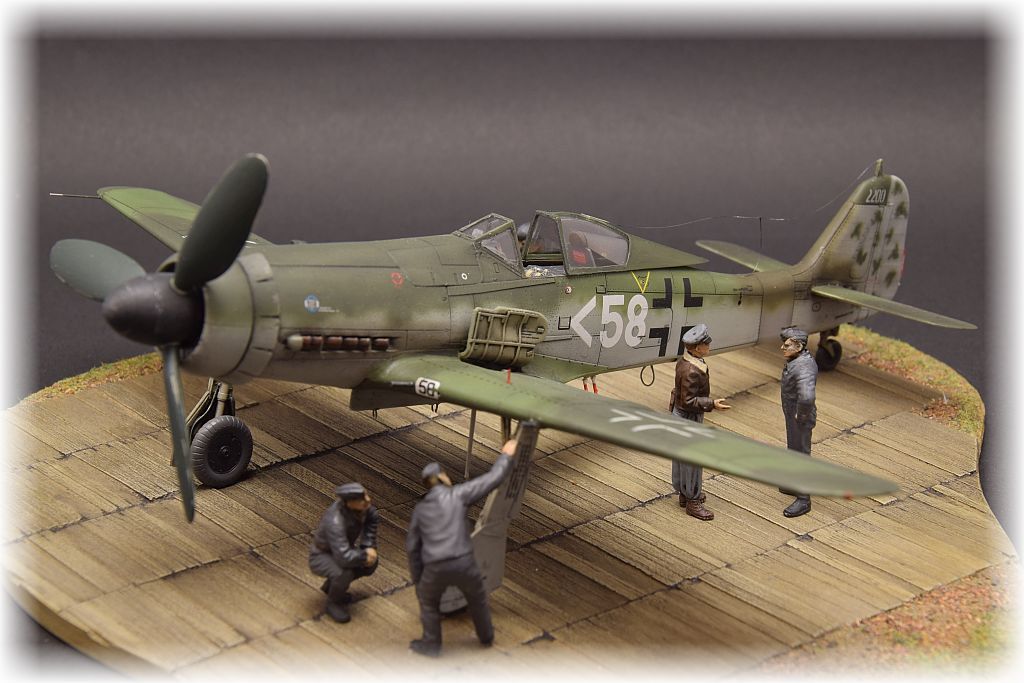 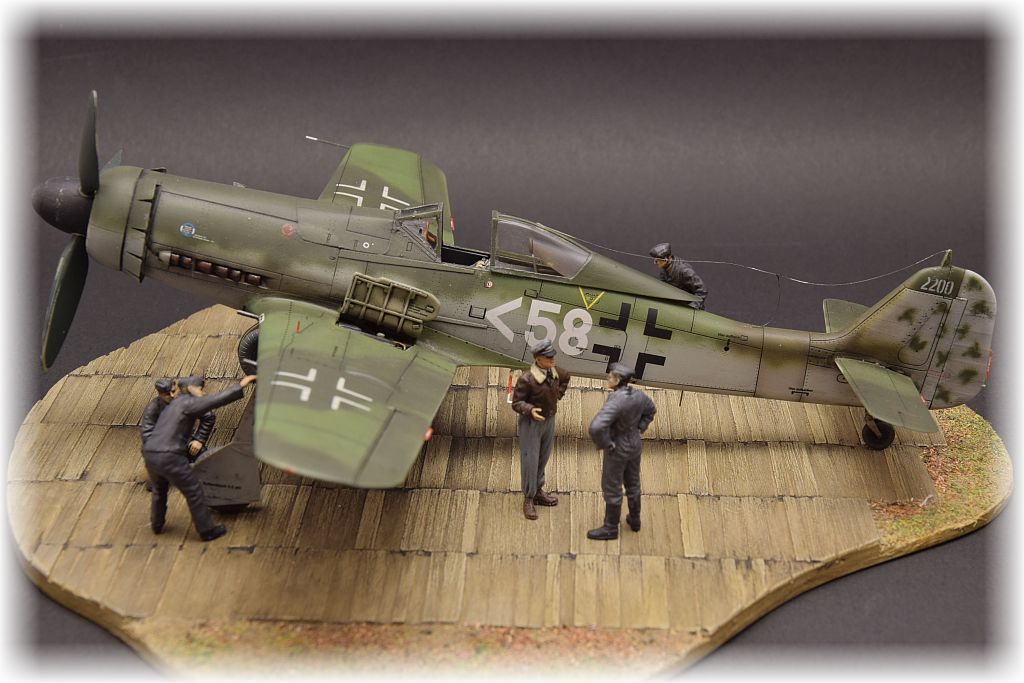 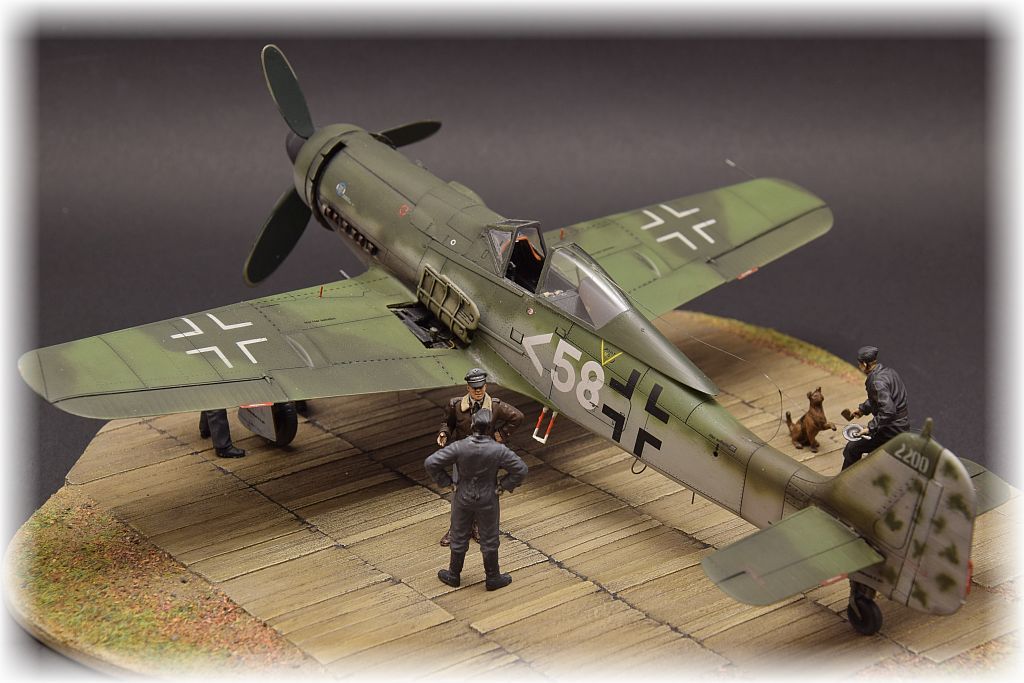 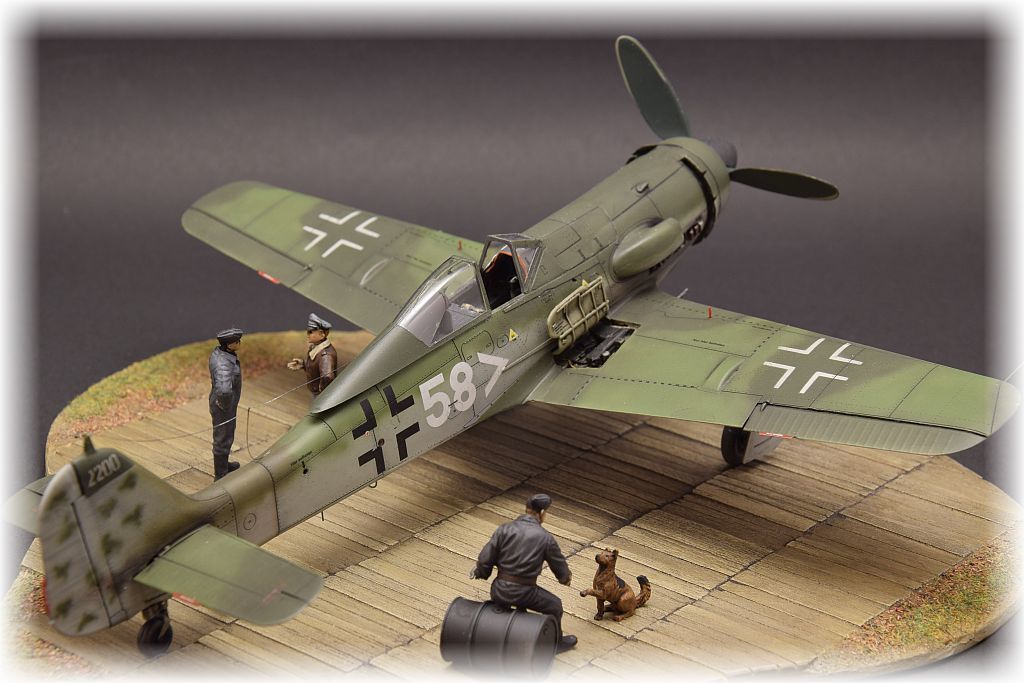 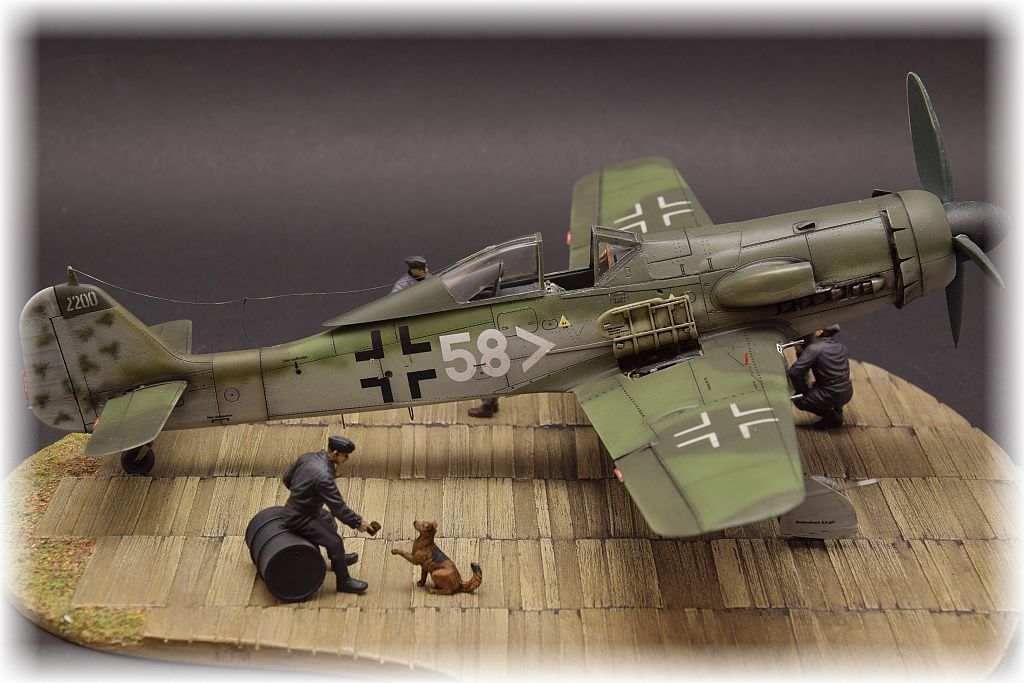 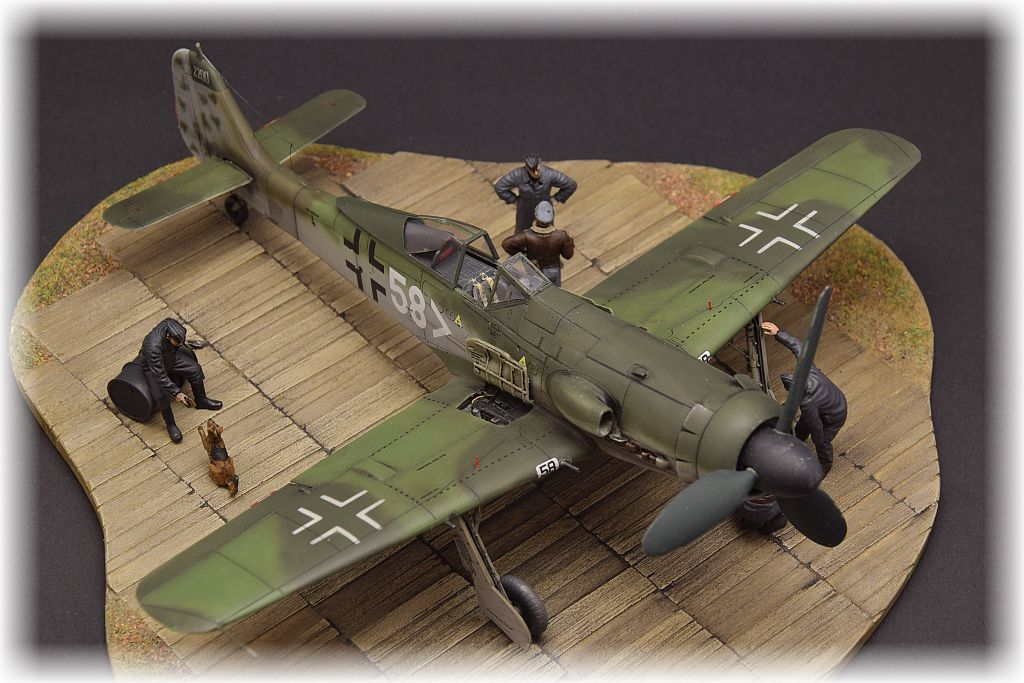 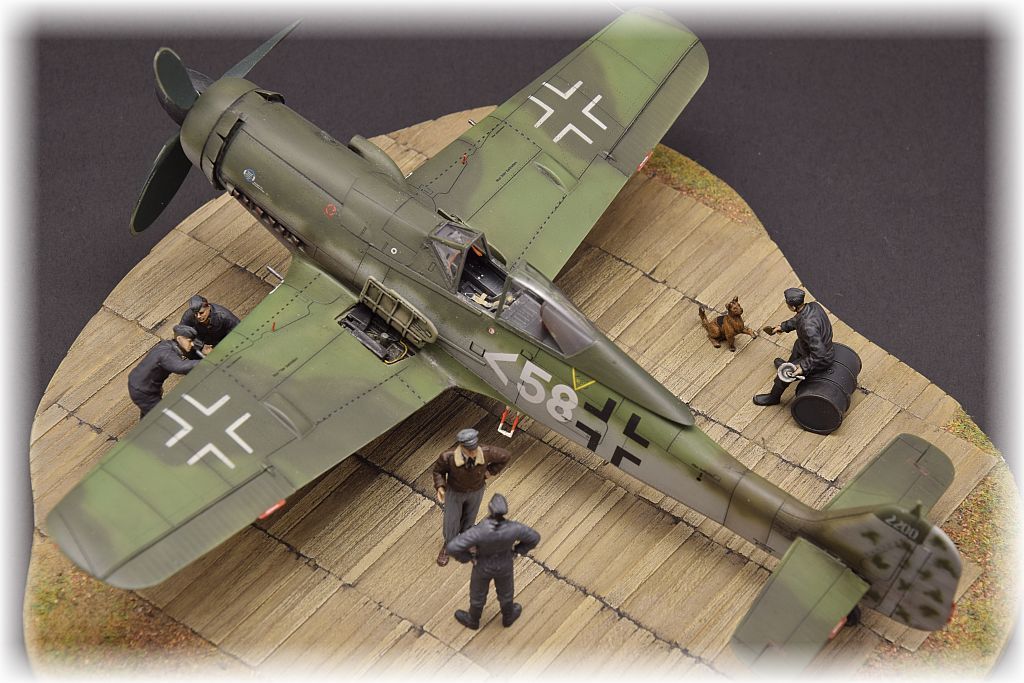 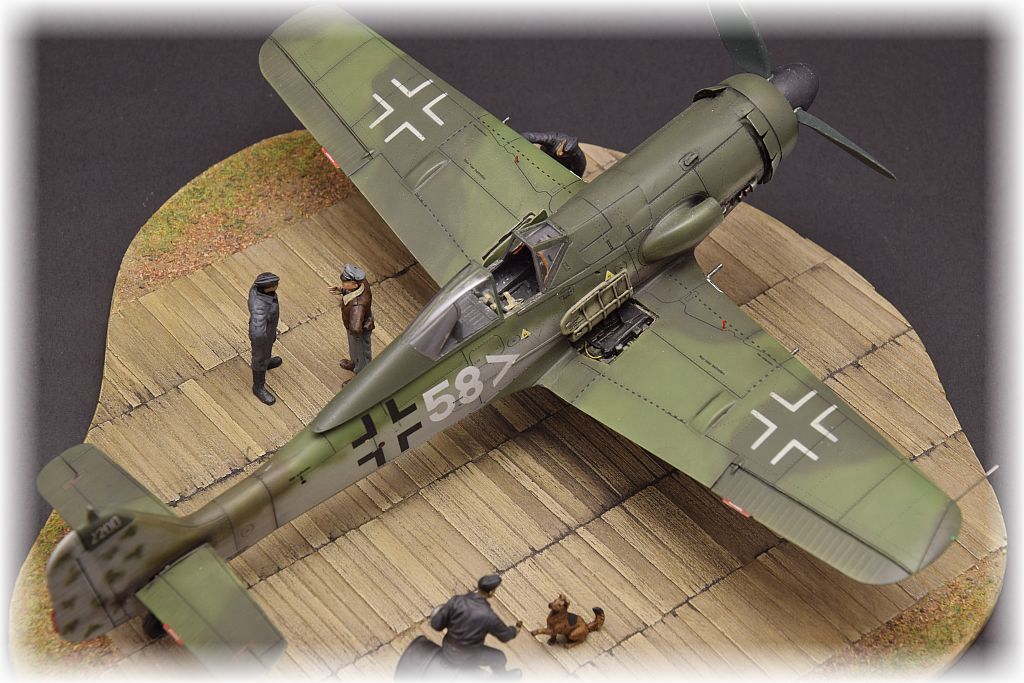 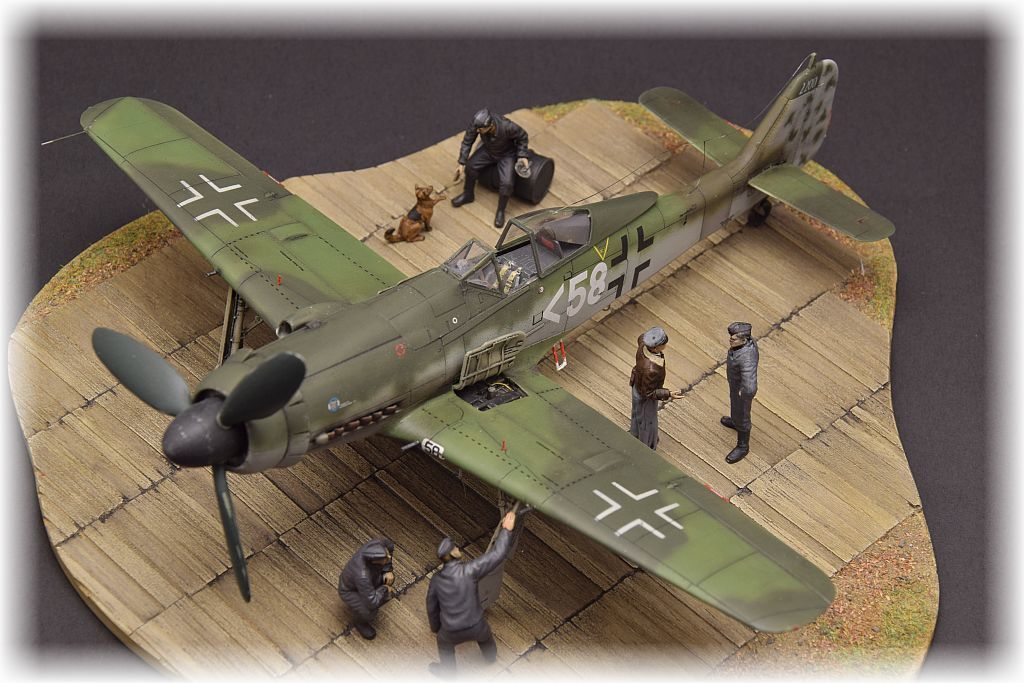 Excellent paint work and a wonderfully put together vignette.

I like the work very much. Where did you get the diorama base from?

Thanks for your comments, guys. I’m glad that you like my “Dora”.
Khouli…I bought the base from another model builder. As far as I know, it comes from a French manufacturer, but is no longer in production.