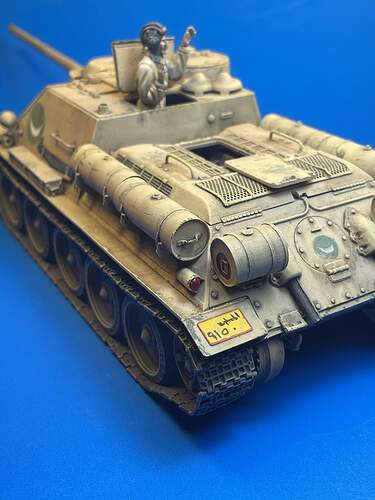 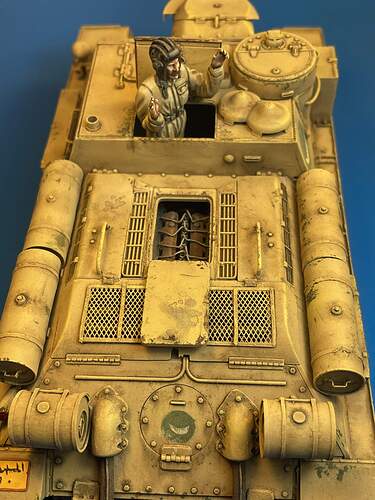 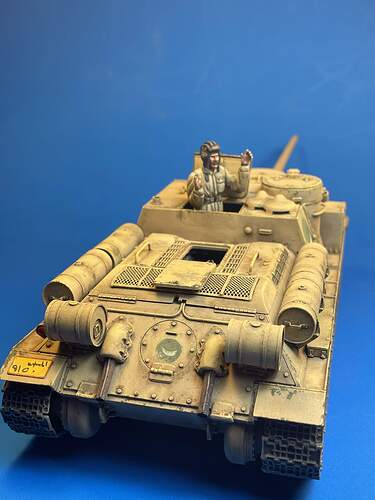 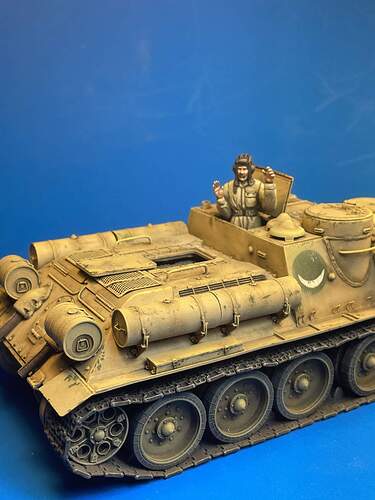 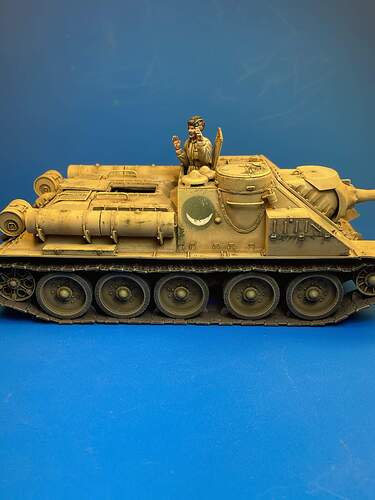 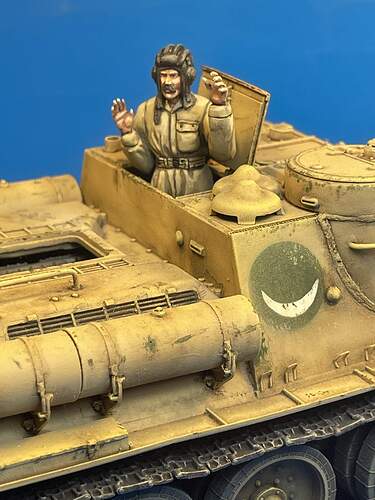 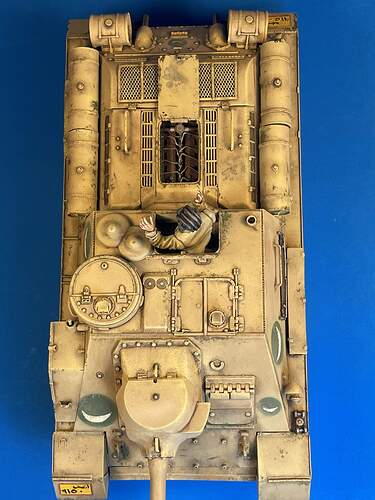 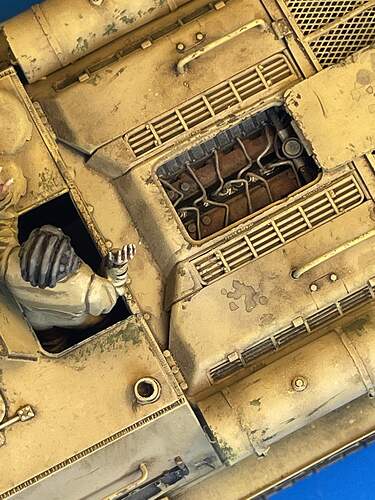 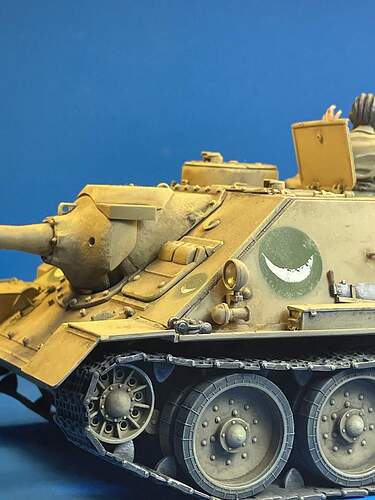 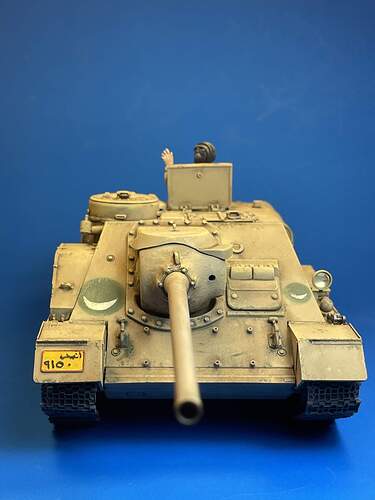 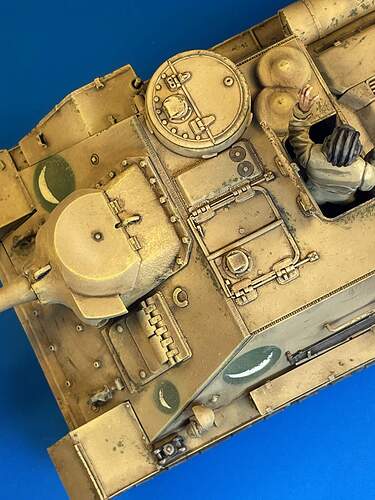 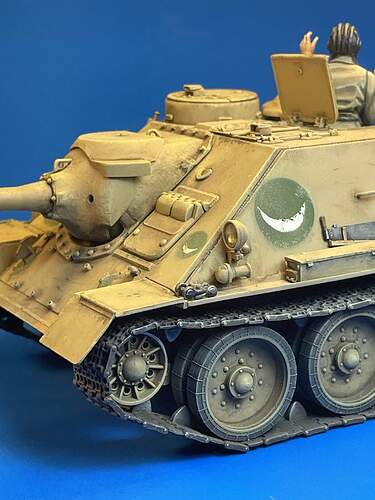 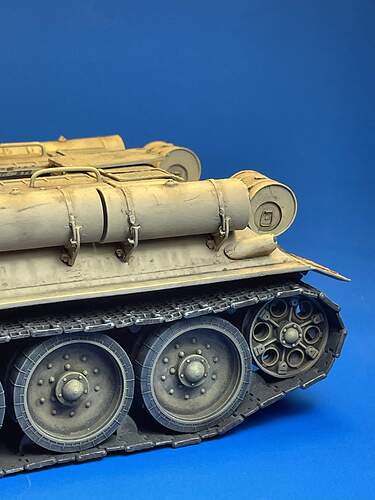 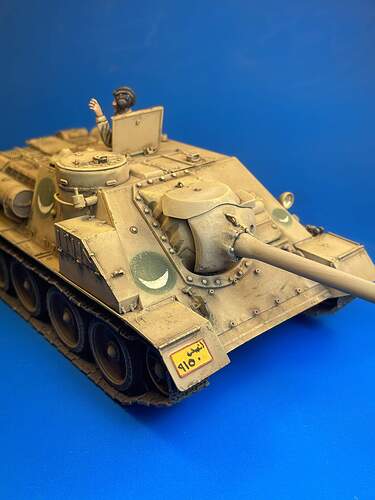 image3024×4032 601 KB
Here is my Egyptian SU-100 from the Suez Crisis. I plan on using it in a diorama; that’s why there’s an Egyptian crew member in the hatch with his hands up. I plan on having him surrender to a group of British Paras. I also have a jeep with a 106mm recoiless rifle mounted on it in the scene. The Jeep is still in progress. I’ll put pics of it up later. The SU-100 is the Dragon kit with Accurate Armor set C071. The tracks are from the kit, it was painted with Tamiya desert yellow and washed with artist oils, then dry brushed with the same. The markings were masked and then airbrushed. The license plates were added to give it a little more interest and color, I have not seen them in any pictures of the battle. I’ll be using various resin figures for the Paras. I think the Egyptian tanker is from Warriors with his arms modified/ replaced, can’t remember exactly. He was painted with Vallejo’s. I think I may have posted this on the old Armorama site. Comments welcome…
19 Likes
metalhead85 May 10, 2021, 3:11pm #2

Oh yes almost forgot; the engine is from Jaguar models however I left off the radiators, they did not fit and can’t be seen any way. I added wires to the top then it was painted and weathered.

Being in desert color give a whole new presence to the model versus 4B0 or green.

Really nice! I really dig the paint and weathering!

Cracking model Richard - really finished well; the only thing I would say is to perhaps add an antenna? But finish and details spot on.

'Looking very forwward to seeing the diorama, but do just bear in mind that I think for Suez the Paras were equipped with '44 Pat webbing (their personal equipment) which should be an easy enough fix from whatever the Para figures are likely to come with (I’m assuming '37 pattern) but they will need a few tweaks.

Really nice
very detailed !
but i have some question…
the engine door in my opininion should have been green and the door of servent probably white and
i should have been added stains on tank drums
check also the handle on rear engine gate

Looks real good! I really the base color, markings, and weathering. All of that combines for a very sharp looking build. I can’t wait to see the finished diorama.

Yes thank you ! I did forget to paint the inside of both of those hatches green. And I will add an antenna once it’s mounted on the base. I’ve been keeping the model in a plastic tub with a lid to keep the dust off of it. I finished the kit about 2 years ago. I didn’t do such a great job on the weld seams around the commanders cupola but oh well.
I have several figures from various companies to use for the Paras. I have a driver figure from Black Dog for the Jeep and a set from the old Imperial Gallery. What modifications would I have to make to their uniforms? They look identical to their WW 2 brothers.
Brian : Did they wear sand colored trousers at Suez? Of the usual brown?
Thank you all for the feedback

I was wondering how well the kit went together, any fit issues?

David, I didn’t have any fit issues with the kit or the AA conversion set, except for the tracks but I think that was me. There are a few spots where I didn’t connect them 100% and you can probably see it in the pictures.

@metalhead85 Richard could a set of fruil tracks work on this kit at all?

Really like your subtle weathering and the shining metal on the wheels.

BTW- you will need to add 2 antennas, because what you have built is the Czechoslovakian SD-100(a licensed copy of the Soviet SU-100).
Egypt bought a lot of these TD’s:

Unlike SU-100, the SD-100 had: a second antennae(on the left rear corner of the casemate top), an infantry phone jack with armor protection mounted on the left side armor plate’s rear, cast exhaust protectors with cutouts and a more rectangular gun mask.

Looking forward to see your dio!

I don’t see why not. I used a set of Fruil on a VT-34 but that was a Tamiya base kit. I think it’s just a matter of how many links 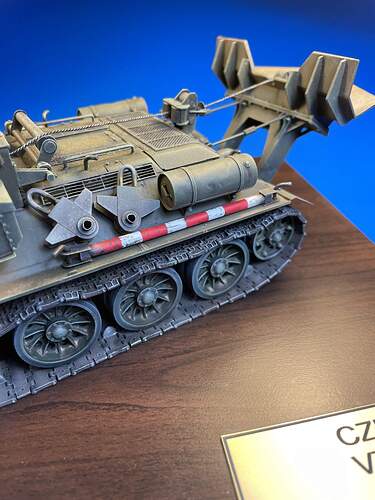 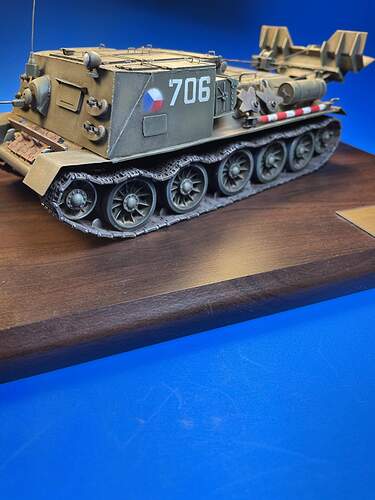 I really like the finish you have achieved in this- the wash you have done is pin-point accurate and really makes all the details pop out. It looks nicely weather beaten too- I think the paint chipping and the painted on insignia add to this effect nicely.

Looking forward to seeing it in the dio- sounds like a great scene you have planned.

Yes I see what you are talking about with regards to the infantry phone jack. I have painted it red like a tail light lol ! I definitely will fix that!

Thank you Karl. I tend to be heavy handed with washes and I’m trying to tone it down some. This battle was only a few days in duration so these vehicles I don’t think we’re too badly beaten up ( except of course for the few that were destroyed) so I need to keep the weathering light.