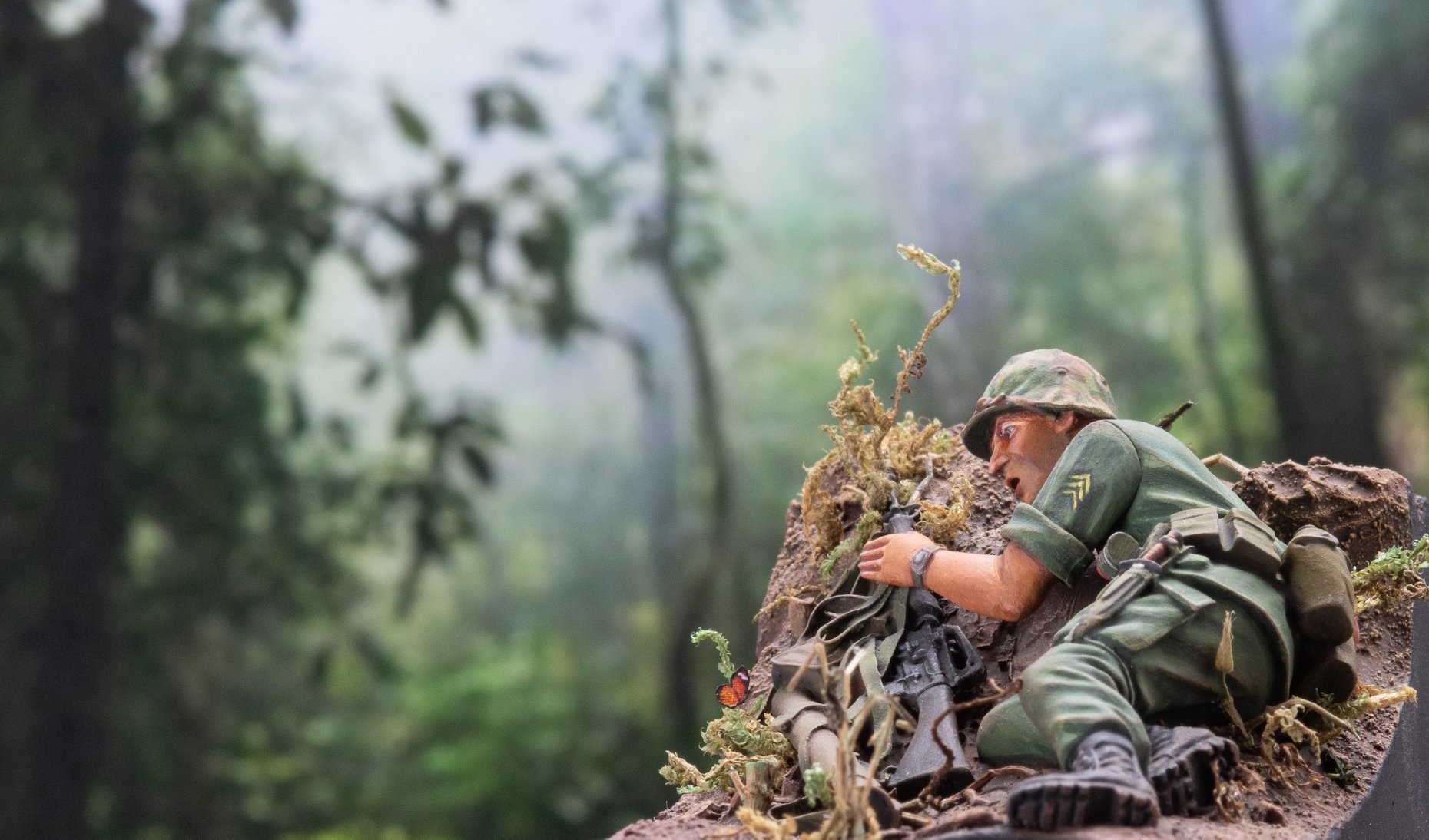 This is partial text from the full article (usually with photos) at https://armorama.com/news/enlightenment-vietnam
SableLiger October 28, 2022, 5:57pm #2

“Some folks are born made to wave the flag
Ooh, they’re red, white and blue
And when the band plays “Hail to the Chief”
Ooh, they point the cannon at you, Lord”

I think the work on this figure is terrific.

I am having issues with accuracy though. By 1969 (the date given) no one was wearing yellow chevrons on their combat uniform. If stripes were worn at all, and most did not, they were black. Infantrymen in the field habitually wore a suspender harness to support their pistol belts and the weight of the belt when full ammunition pouches were carried plus usually two canteens, soon had unsupported pistol belts down around your ankles. I cannot quite make out what those pouches behind the bayonet scabbard are supposed to be, but assuming they are ammo pouches, that sergeant is going to have a heck of a time reloading is weapon. Carrying where they are designed to go on that TA50 gear (in front) is bad enough, but carrying them in the rear means you have to lift your body up to reload, and that will get you very dead, very quick. There is no strap on the helmet cover either, and as long as I was in the Army I never saw a helmet camo cover without one.

I hate to be critical of anyone’s work, and I am not being critical of the actual execution of building the figure itself. I wish I could do that well. Mine all turn out like those metal soldiers we used to buy at the dime store when we were kids. Then again I do not know what references the modeler had at his disposal to work with. My observations then are come from having spent a good part of my adult life in the Infantry.

The work is esthetic and cleanly done. Adding on to @Quincannon comments:
The helmet liner no longer had a chin strap (leather) so that would be absent. The steel pot still had the web strap which was commonly hooked out of the way on the outer rear exterior.
The boots look good on the soles, late war Panama pattern but the side detail is confusing and all black instead of the black leather + OD canvas and nylon.

I cannot quite make out what those pouches behind the baynot scabbard are supposed to be, but assuming they are ammo pouches, that sergeant is going to have a heck of a time reloading is weapon. Carrying where they are designed to go on that TA50 gear (in front) is bad enough, but carrying them in the rear means you have to lift your body up to reload, and that will get you very dead, very quick.

Interesting use of an old Verlinden figure. The subject matter is indeed artistic, but the flaws in execution have already been mentioned.

To answer Quincannon, those pouches are a seven pocket ammo bandoleer strung around the waist. In the late 1969 period and forward, it was very common to see infantrymen drop the basic training LBE loadout and roll with a pistol belt and canteens and bandoleers. This was particularly common practice in 1st 'CAV. 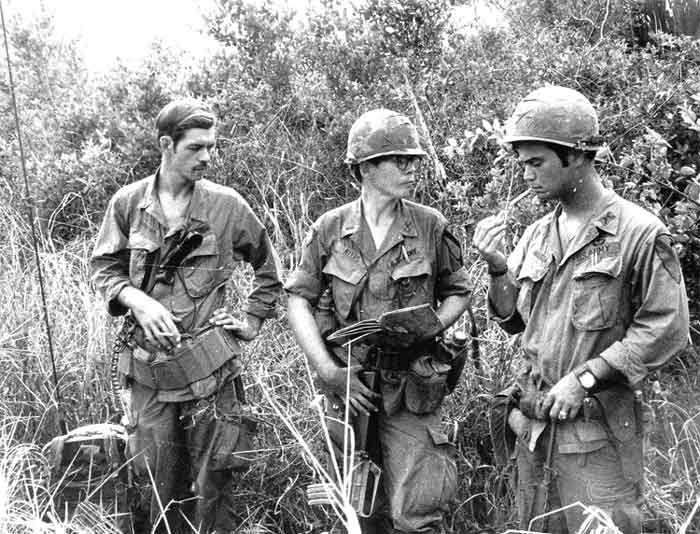 actually; by March 68 it was considered to be a death warrant to wear stripes or any rank above Spec 4.
Yes some fools did and some of those fools came home in a bag. I think the builder did his best, and honestly did a nice job. I did notice a very few petty things:

Please don’t be offended by my nitpicking, but I’ve been there
gary

the “classic” pouch you see in the photo actually came with two 20 boxes in each pouch. Also were a perfect fit for two magazines. One would hold 14 twenty round mags, and two of them gives you the 28 mag heavy load out. Some guys hung them around their neck and others around their waist. Always found them to be in the way around my waist. Notice the guy with the 45 on his side. That’s an extra fish head if you kill him! I carried my 45 under my shirt with the top two or three buttons undone.

The First CAV (air mobile) and the 101st were about the only folks you saw wearing unit patches. Even then subdues was the norm. Guy in the middle hasn’t been in the bush too long, and you can see it by the color of his uniform and how the patches and rank are flaunted at you! The guy on the right has been out there a lot longer, but is also the platoon leader (I think anyway). Notice his watch is on a black wrist band! One flash in the sun, and you know the answer. Also notice the rings on their fingers! Lets hope they got outta there alive.
glt

Thanks for that picture. That guy on the right looks familiar to me, but I cannot recall a name. I think he was a classmate of mine in the basic course at Benning.

Very well done. I’m not too concerned about the helmet band. Soldiers tend to do whatever suits them once they’re away from the flagpole. 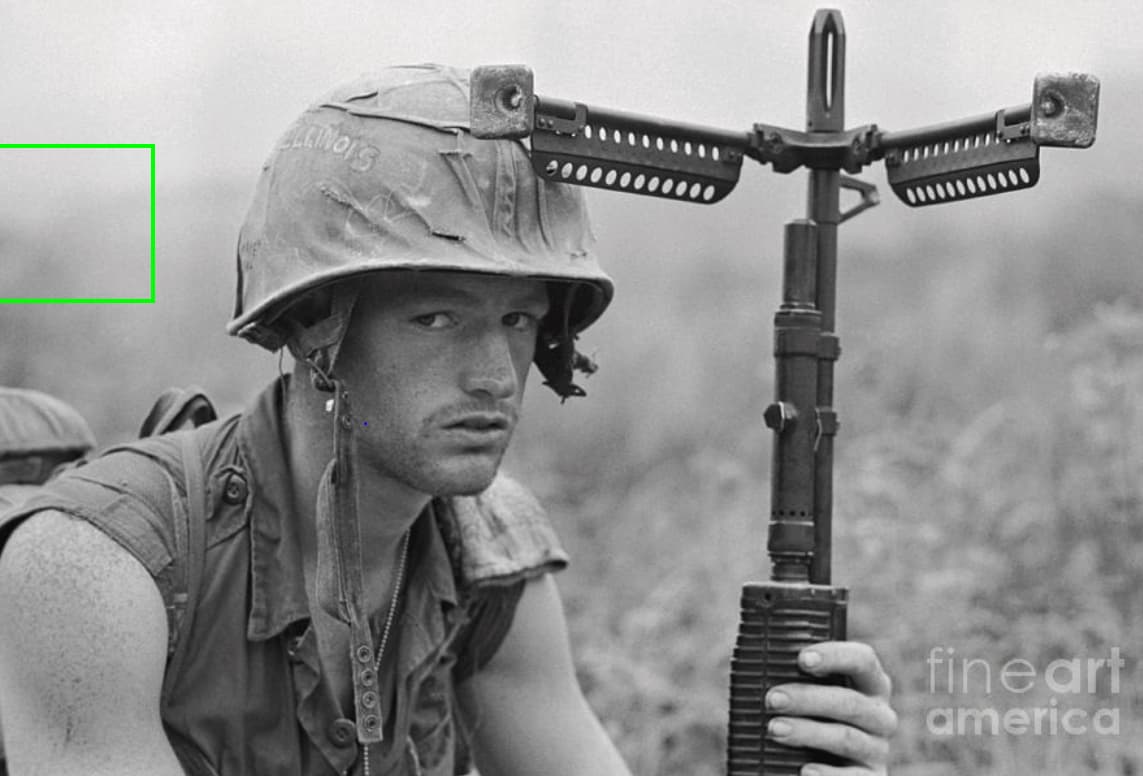 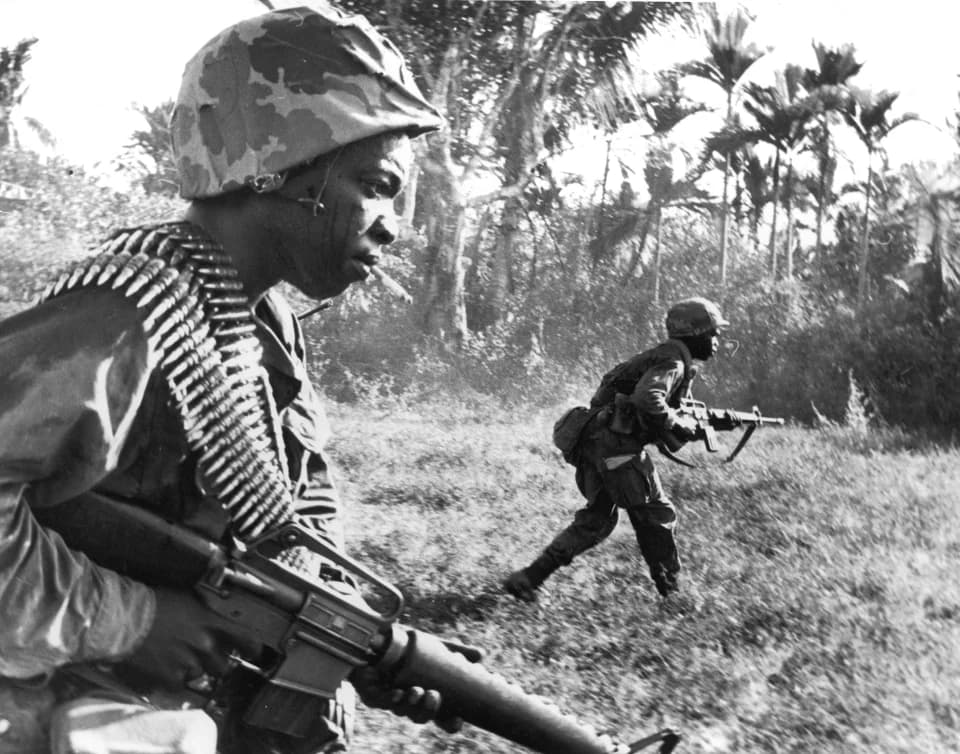 The arrangement of the kit - some things are less egregious than others. I’ve seen some pretty whack shyte myself. I wore a thigh rig in Afghanistan. But never on the rare occasions I was actually inside a vehicle.

The thing that makes this slightly less than a perfect figure for me is the painted on chevrons. Right or wrong (Hell, they wore them on Aliens) they need to have a bit of thickness to them - paper, putty, lead foil or whatever you choose.

I have a period airborne helmet I got from a 101St Viet Vet. His helmet lacked the chin strap/cup and the A shaped harness was tucked into the liner out of the way.

His helmet has the helmet band.

No helmet band can get you… 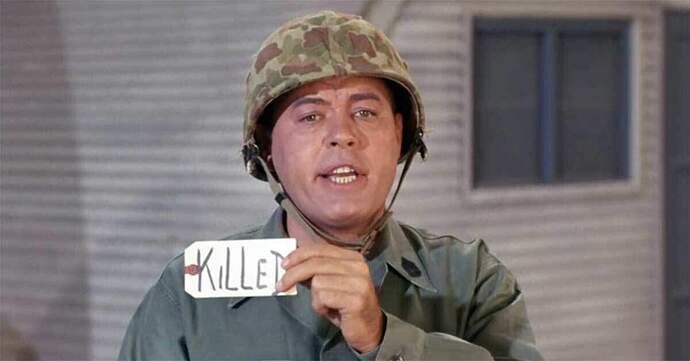 That’s what Grandma Pyle used to say! Course, I never could understand why we needed one on a motorsickle helmet. 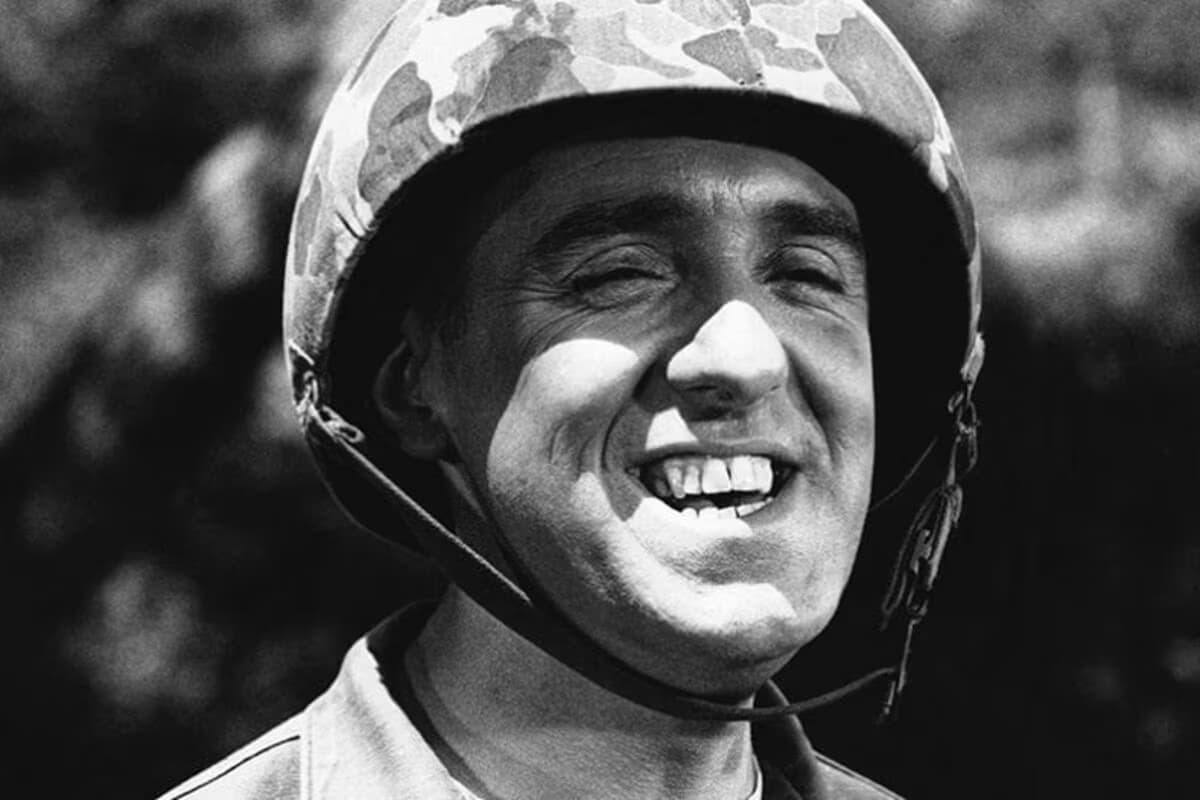 Just sharing some VN era M1956 gear I own. Along with an AR15 rifle that would be typically carried during the period (XM16E1). 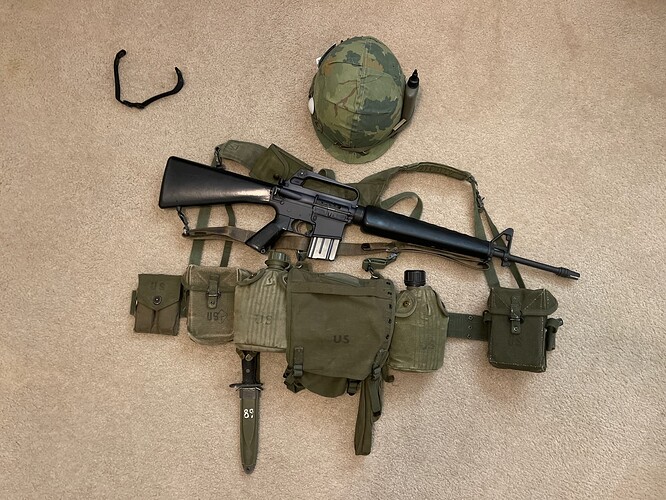 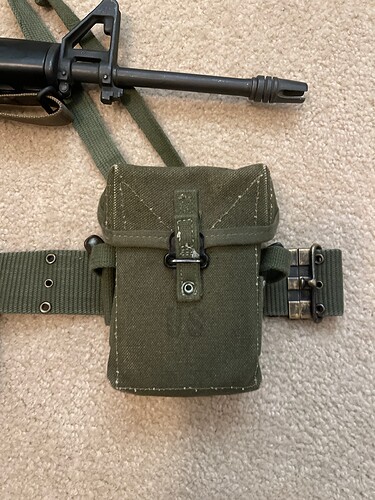 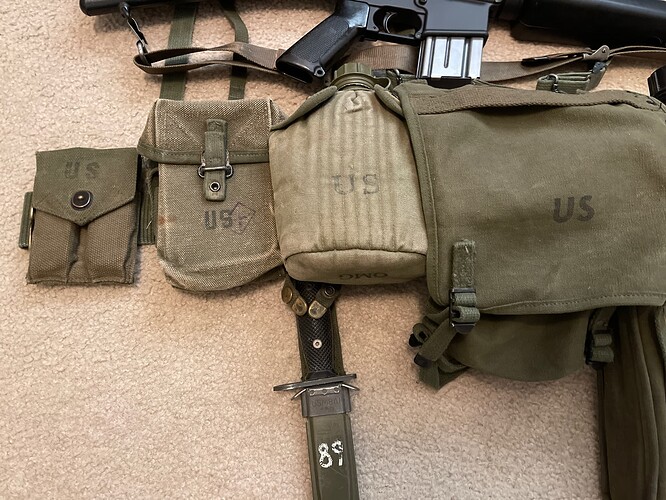 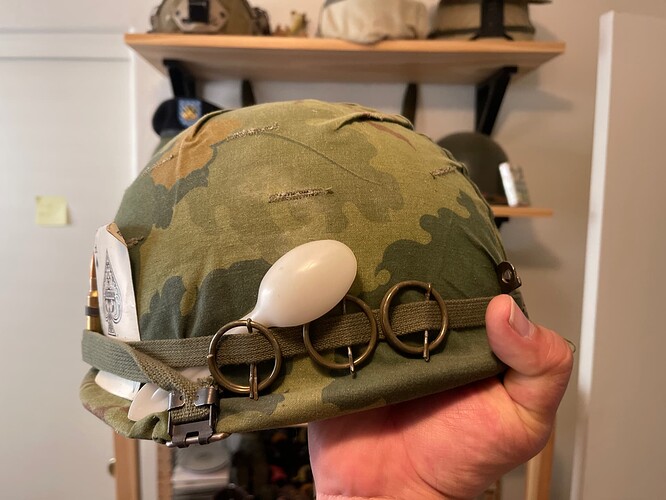 M1 steel helmet with reversible Mitchell Pattern cover and decorated as it would’ve been worn back then. With a short section of M60 ammo, a “Kill Card”, C Ration spoon, grenade pull rings and a can opener.

I’m a military collector, so I scrounge surplus stores for gear and I use it as reference.

As for the helmet band. US Marines used the inner tubes of Jeeps as a band, but most of the time, they didn’t even bother wearing them. 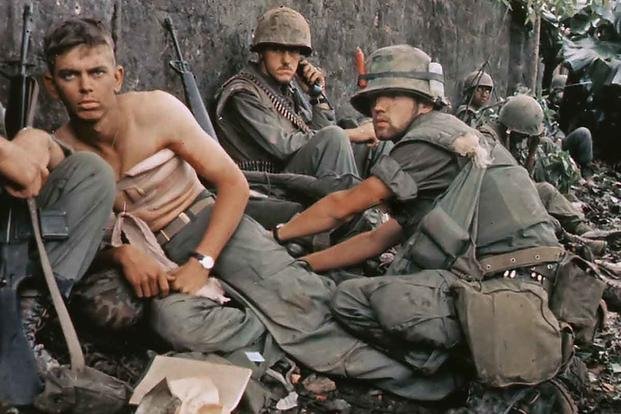 You can see the black rubber inner tube band here, along with other Marines not wearing bands on their helmets.

Something ain’t right there. Here’s another angle… equally wrong looking.
I know on the TV series Combat! Vic Morrow wore a camo cover to hide his plastic (fiberglass) copy of the M1 helmet. This was made up for him because he didn’t like the weight of the original. You can also see some of the German helmets looking kinda soft around the liner rivets and vent grommets for the same reason. I’m glad the actors and creators of Band of Brothers were more dedicated to realism. 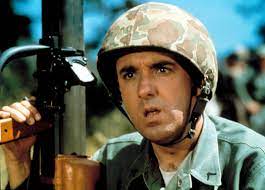 As for the bandoleers; it was Bart of the packing material used on 5.56mm ammo, which was usually disposable, but soldiers found it useful for carrying extra ammo. 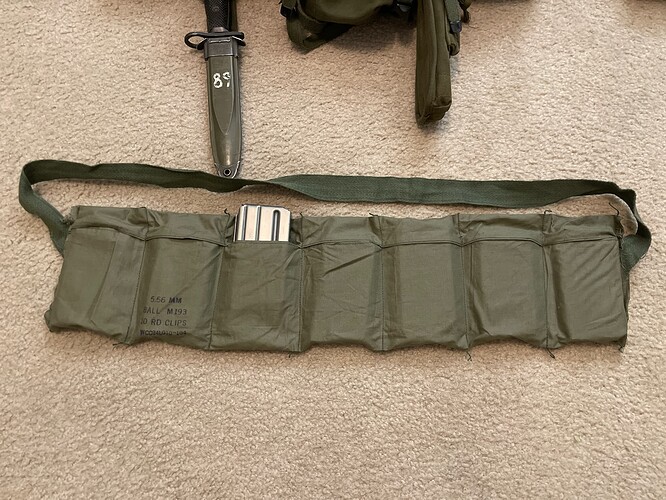 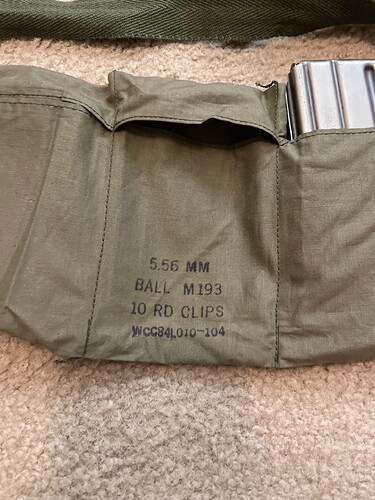 I hope to get an early M16 civi version SP1 Colt with duckbill flash hider one day.

Nice collection! I started collecting for the same reason… reference material for modeling.

Yeah. The prop department merely removed the steel shell and wrapped the helmet cover around the liner, which made it more comfortable for Vic Morrow to wear on set.

I build my XM16E1 using parts from Colt and the receiver set from Brownells. The Colt SP1s had that big front take down screw that didn’t look correct to me.

I also built an XM-177E2 replica that looks better than anything offered currently and much cheaper than the Colt “reissue” replica. 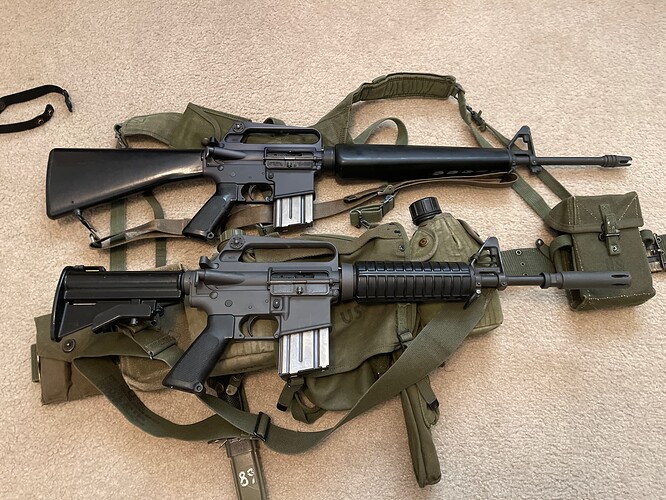 Chevrons definitely the weak point, and the uniform is too clean. Otherwise, I like it!