Did Jagdtigers retain the 3 colour camo to the end or did olive/brown appear?

Jagdtiger 305083, was completed on April 15th, 1945, making it the second to the last Jagdtiger recorded as completed in 1945, (4 others are unconfirmed as to their completion status). On May 5th, 1945, it surrendered along with two others at Strengberg. It was then taken to the Kubinka School of Armor and Evaluation near Moscow for testing. Photos taken during this period clearly show the standard 3-tone paint scheme.

Apparently, right at the end, some German armour left the factory in Panzer Grey.

Its as true as i’m sat here riding my bicycle.

I have seen from more than one source there were some entirely in olivegrun. 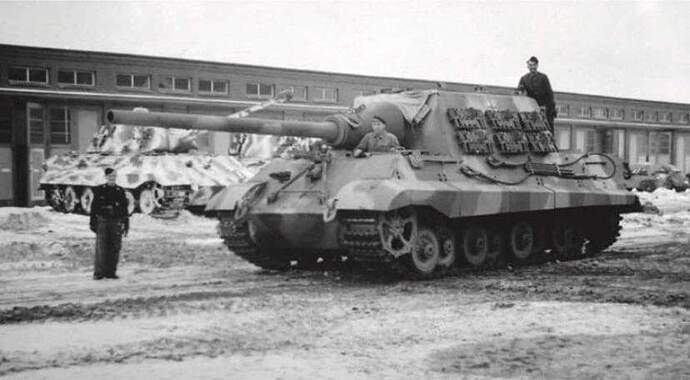 I know it’s black and white, but you can see the strong camo pattern. I can assume that the pattern is Dunkelgelb, Rotbraun and Olivgrun.

Well Esci, Fujimi, Aoshima and Nitto all had Panzer grey on their box top… surely so many kit manufacturers can’t get it wrong! 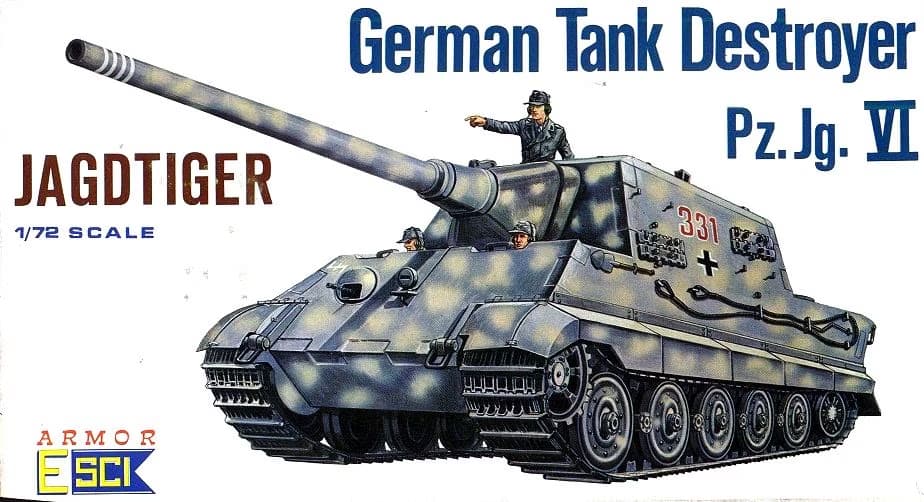 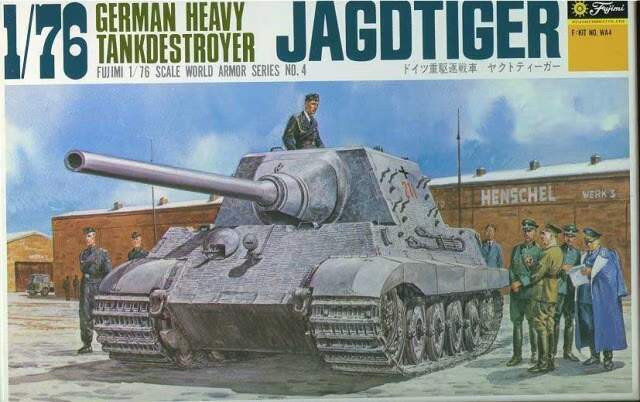 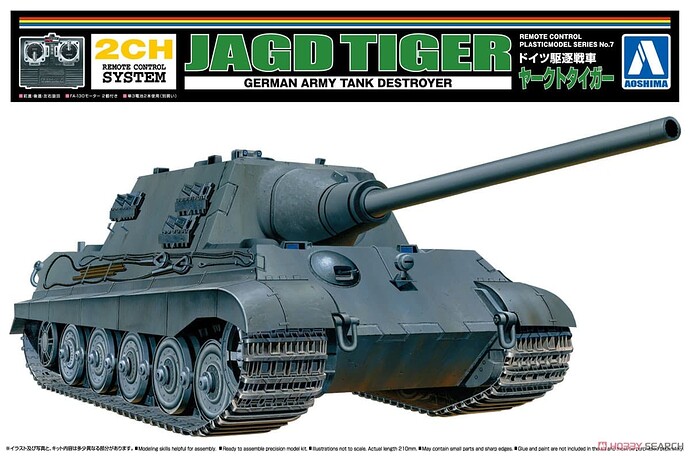 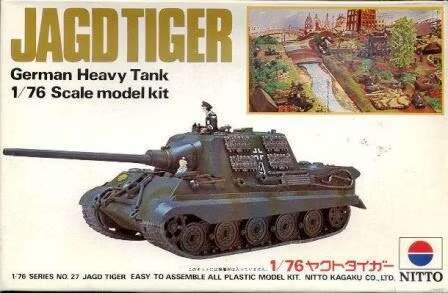 I would say model manufacturers get it wrong quite often, museums too!! The only way to get it right is through in depth research. 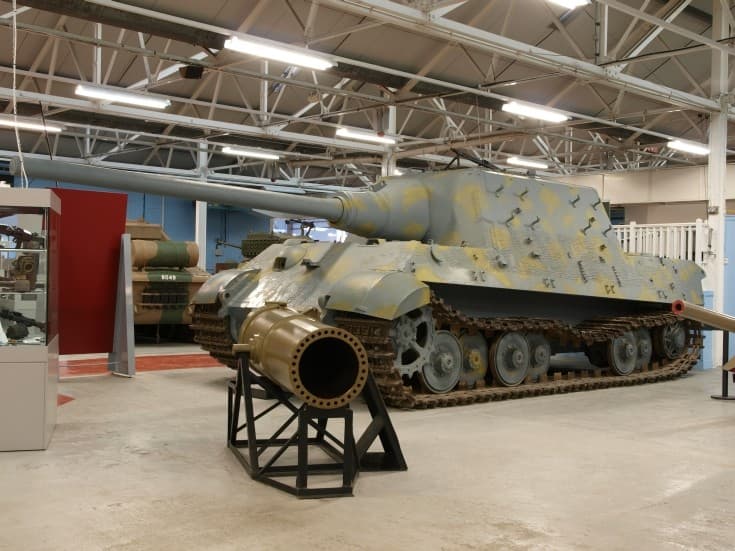 Same Jagdtiger, (Bovington), in its first (?) repaint, Olive Green! (or so they say, looks more grey to me).
The only reason they didn’t paint bullseyes on the sides is they didn’t have any red paint.

It’s been repainted at least 3 times, each one being entirely different…and WRONG!
It has now been painted a fourth time, overall Dunkelgelb, which is at least passable.

Same with the Panther tank in their collection, painted in dunkelgelb and rotbraun; which is wrong as well… 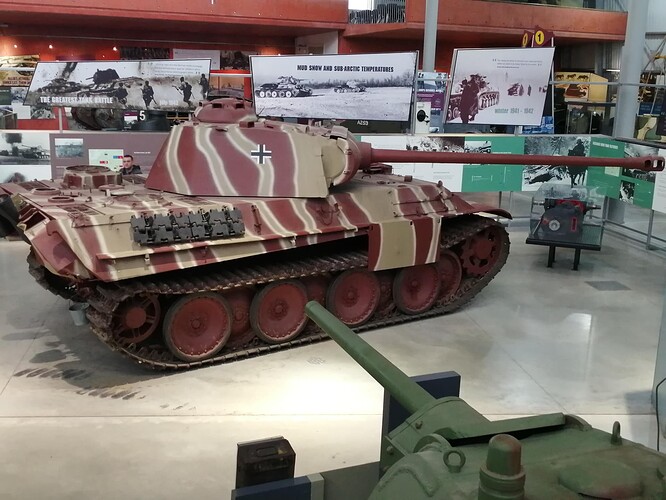 Wonder if the Jagdtiger at Kubinka is painted the right way? 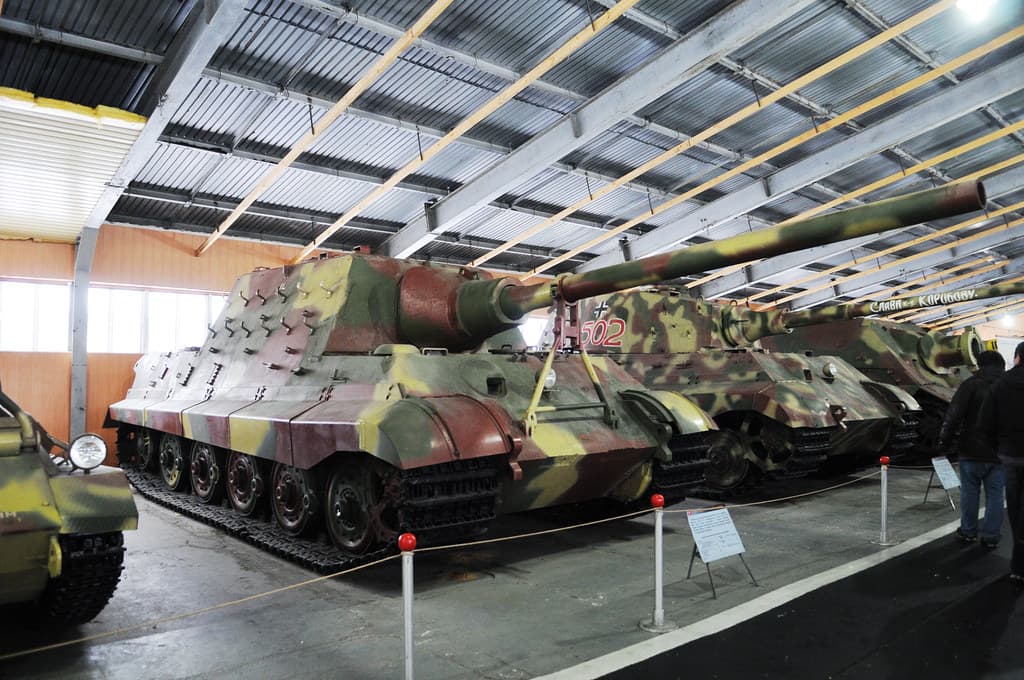 The above photo is Jagdtiger 305083, the same one as I posted in the link above. While not exactly spot-on, it at least compares favorably to its original paint scheme, especially when compared to these other abominations. Note the ribbed front fenders, like the final Tiger IIs, it is the only Jagdtiger known to sport such a feature.

Hi @paska, regards the ribbed fenders, I had heard discussion that there was suspicion that this Jagdtiger when collected by the Russians may have been missing its fenders, and to make a display worthy / complete tank, the Russians took those fenders from a KT? hence why they are odd as you have noted? thoughts on this?

The majority of the left side fenders match the paint on the hull, but the left side front and the entire right side don’t, indicating that they could indeed be cannibalized from a Late Tiger II. That would explain the discrepancy.

I hope you realised my post was tongue in cheek…