FINISHED. A project on the side: Wunschdenken

Since the kits for my current project is largely built and after painting 20+ faces I wanted to cut some plastic and sniff some glue, I decided to do a small project on the side. This is also an entry in the MiniArt campaign.
The subject of this dio will be the MiniArt Lanz-Bulldog D-8500, being admired by a passing farmer with a wheelbarrow. “If only I had one of those”. Wishful thinking so to speak, or Wünschdenken in German.
The construction of the tractor is finished, ready to receive some paint.
Construction was rather straightforward. Only 2 parts gave some problems: a control rod was attached to the sprue with 3 gates, and, though successfully removed intact, broke in 3 parts while trying to clean it. Luckily it is easy to replace with some copper wire. The other one is the bracket for the exhaust. The instructions indicate it should be symmetrical, but once the exhaust is attached, it will be clear that it should not. So, while trying to correct it, this also broke in 3.
Besides all this, I added some minor details: a latch to lock the cover that hides the starter in place, a control valve on the end of one of the conduits (which should be scratch built by design) and a spring that keeps the cap on top of the engine cover in place.
Now for the pictures: 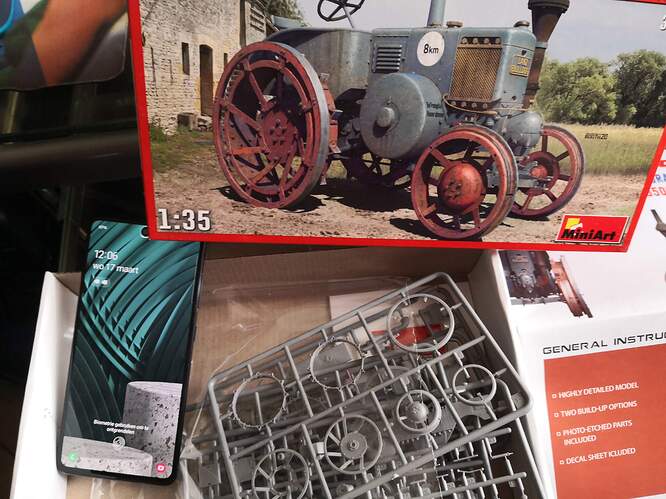 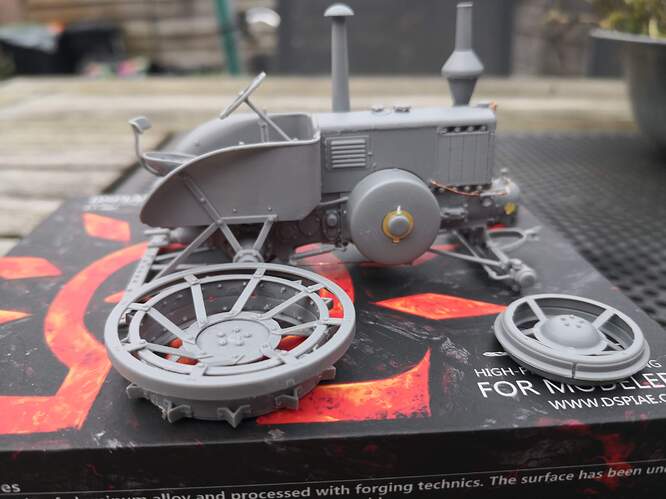 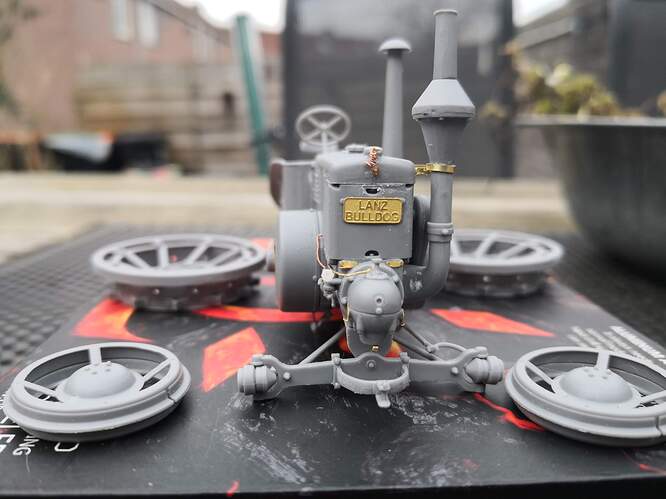 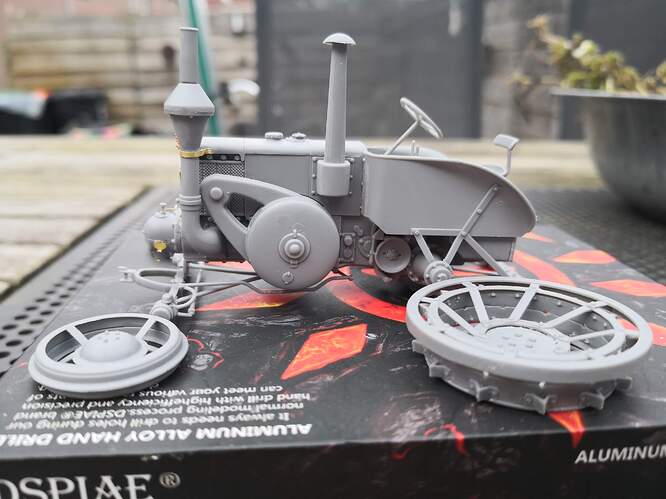 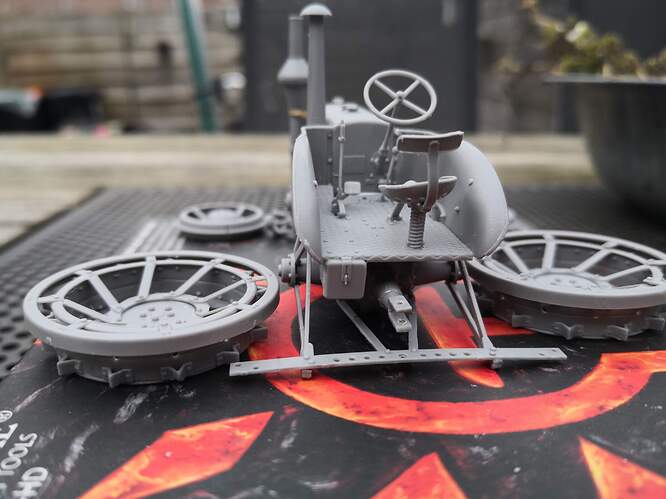 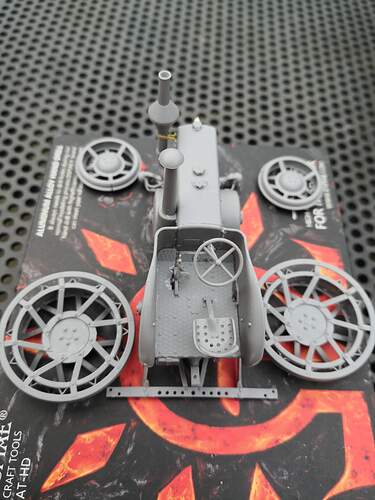 A tractor needs something to do. A resin water cart, from Plusmodel has also been built, to be hitched behind the tractor. This will provide a nice contrast between the old fashioned cart and the tractor.
I only modified the drawbar: it has been shortened and a towing eye has been added by a local Eischenschmiede. 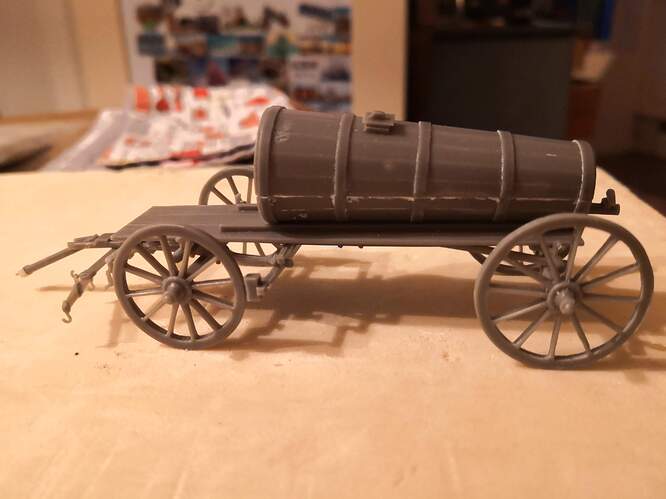 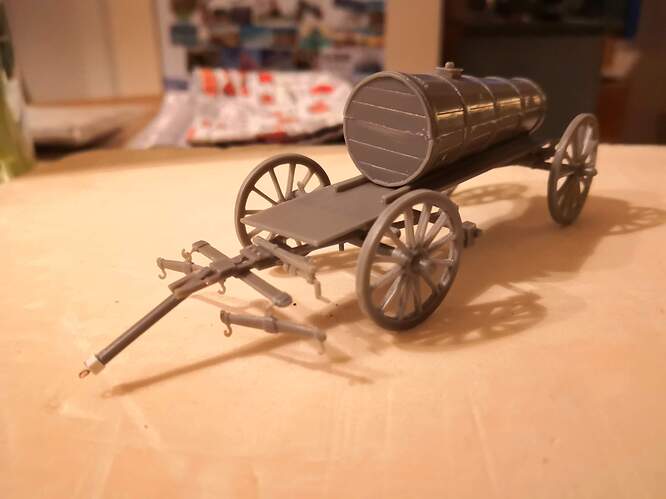 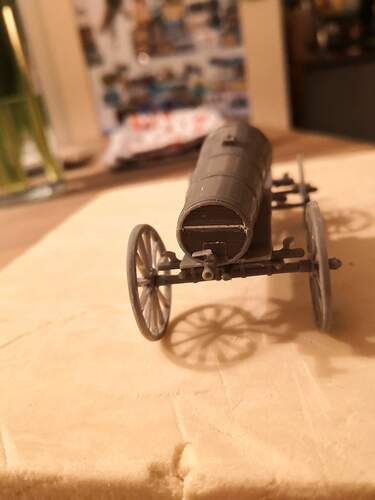 The wishful (or is it jealous) farmer has taken shape too. A old MK35 kit. The right hand came mangled out of the package, without fingers, so I had to replace it. I also turned the head to gape at the tractor. 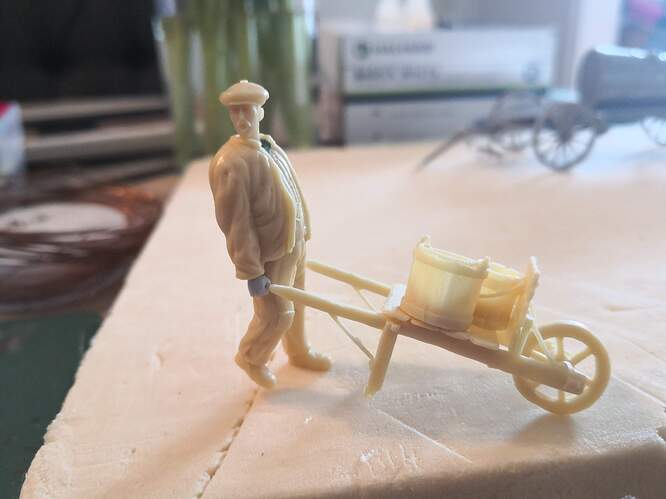 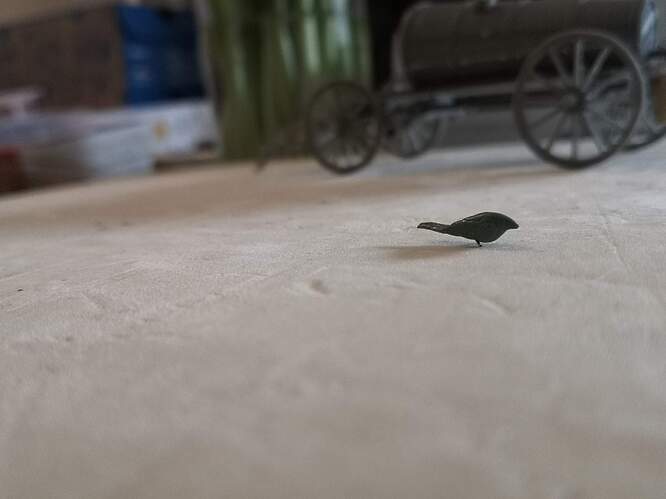 This is going to be really cool. I have the resin kit of the Lanz-Bulldog in my stash. (why is it every resin kit I have has been released in plastic) Anyway, I’ll be watching this…
Cheers’
C.

Thanks. The groundwork has been started too. This is a nice little fun project… 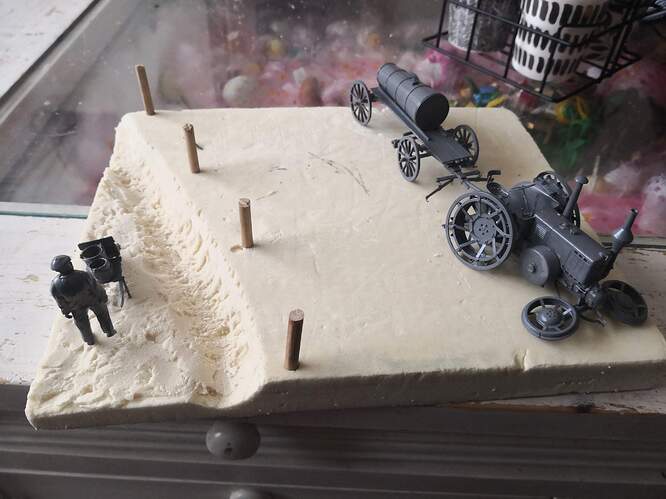 The tractor and water cart are both ready, only in want for some dusting. I wanted to depict a fairly new tractor, which did not receive the battering yet, so I held back on the washes and pigments. The cart, however has seen better days and was treated with oils and dark rust paint. Except for the towing eye; that is brand new, being made from forged iron. Oh, and the blackbird is on its perch. 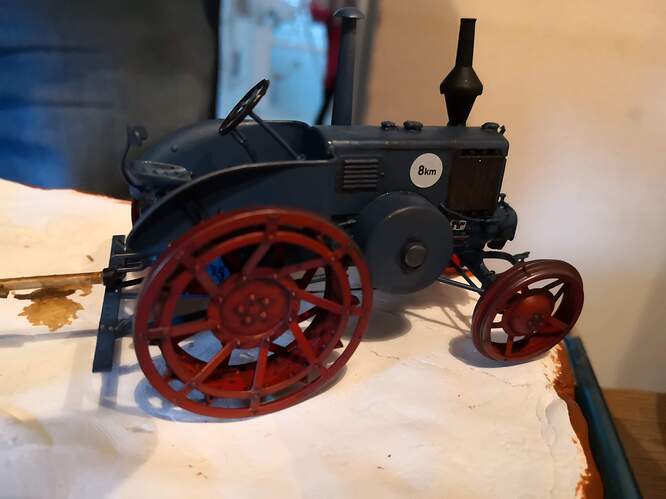 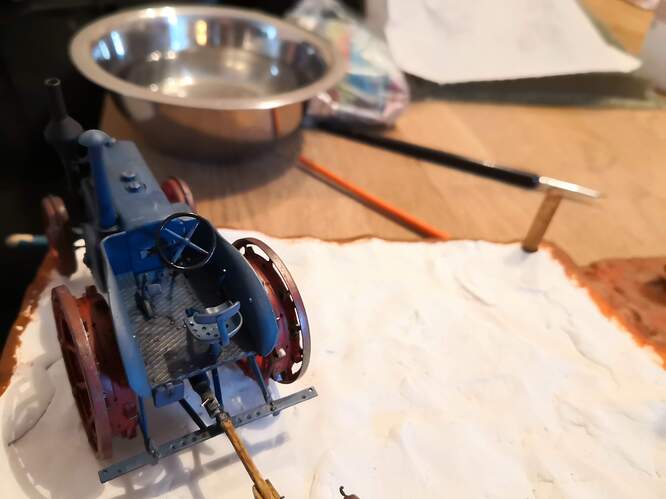 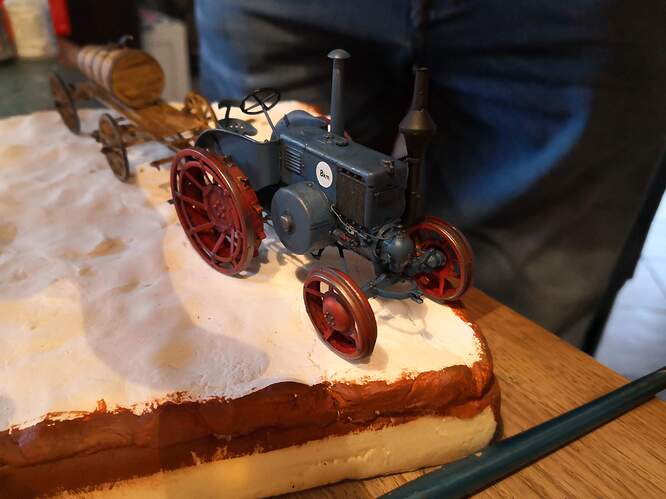 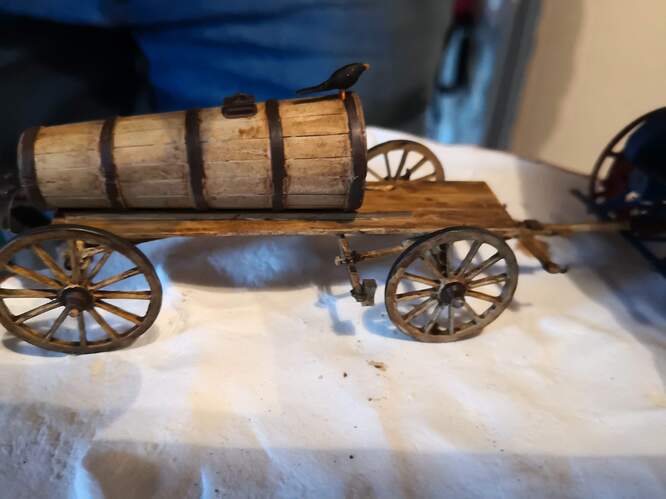 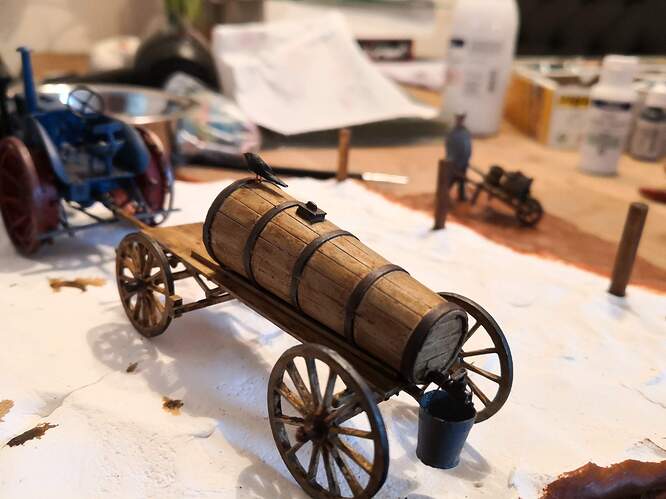 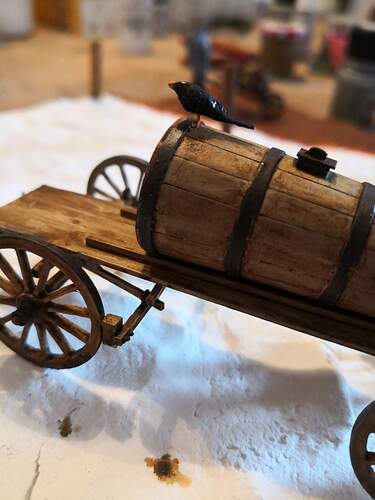 . The blackbird is a nice little addition, and I’m looking forward to seeing how the groundwork pans out as the creation of scenery elements is panning out to be my favourite part of modelling for me,

Cheers friend. It certainly out of the normal bounds of the military stuff, though so was my station.
I expect the grass to arrive on Saturday, so the end is neigh…!

A great little build and as usual you applied your A-game Painting & Weathering - 110% convincing, bravo sir. I’ve got a couple of spare pigeons if you want them, they look like they’re up for a 16,620.02 kms flight…not sure how long they would take though…and you’d have to glue them down to stop them coming back here

Thank you so much Martin. Only some dusting needs to be done… The last thing before I glue the vehicles in place… That will also subdue the bright white speed limit decals a bit…

As for the flying rats: I do have a set of those lying around, and considdered using them, but think they are more city style…
Unless I paint some like common wood pigeons…
So they can be spared a long distance flight from down under across the globe

Awesome paint job. I’m really impressed. The wood is perfect. Of course the tractor too. I’m sorry, a little correction: I would say “Wunschdenken” in German.
LG
Frank

This is a cool project. I love to make civilian stuff once in a while myself as well. Keeps it in perspective. That is a great idea with the water wagon. I never knew that kit existed!
Lookin good so far. Any way you can shorten that farmers’ neck? You know my pet peeve. LoL
J

Thanks Frank, I appreciate the comments and compliments…

I have changed the title

I thought that, since the whole verb is Wünschen, the derivative would also have an umlaut…

I can imagine what you were thinking, so forgive the little correction. An awesome work, I’m very impressed.
Frank

Thanks Jerry… The tractor more or less forced me to look for something different, together with the farmer, waiting in my stash…
The cart is a resin one from Plusmodel. They also have one without the tank…
Hay wagon, PlusModel 385…
As for the head, it is still separate, so I can shorten the neck… 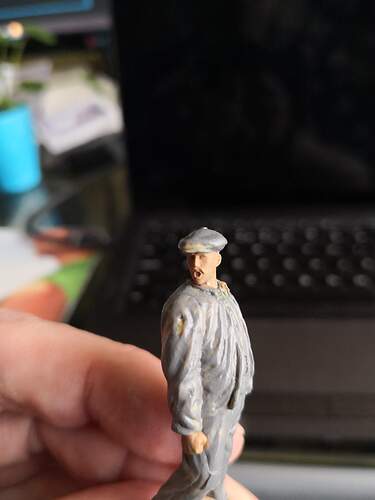 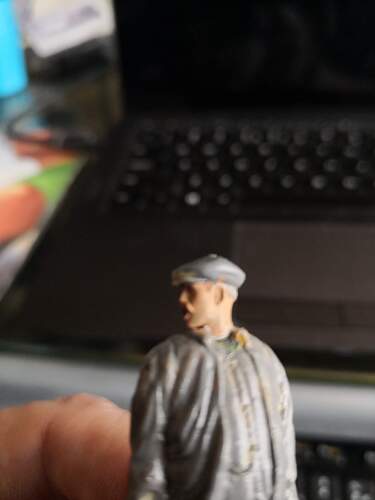 This will work. Big improvement. Personally I would go shorter. Carve out a scoop from his collar and fit the chin in it. But that is my personal taste!
J

While still waiting for the grass materials, I painted the farmer… 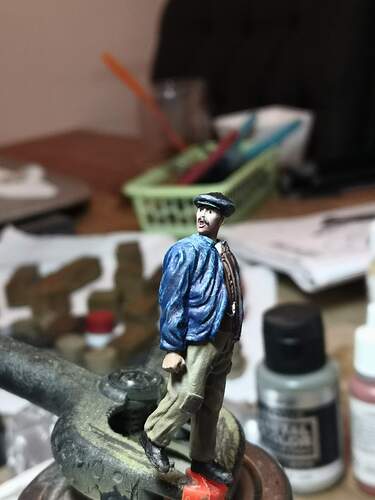 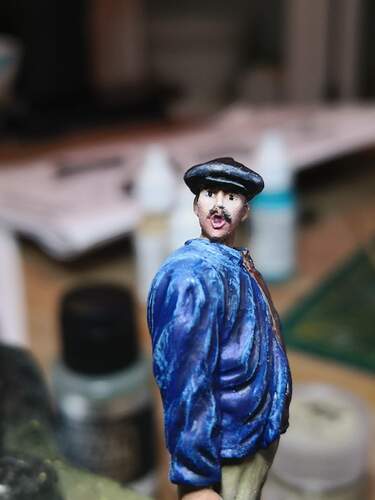