People!
I need help from the experts!!
I found a couple of captured T34/76’s in Finnish service and now I am trying to identify what version it is. To me it looks like a 1940 hull with a 1943 turret and drivers hatch.
Then some homemade boxes and additional periscopes on and around the turretroof.
Early 1940’s tracks, but later dated wheels. Oh… and a softedge turret?

And while we’re at it… what is stored at the right rearcorner???
Some form of horn or exhausts, ratcheted down? 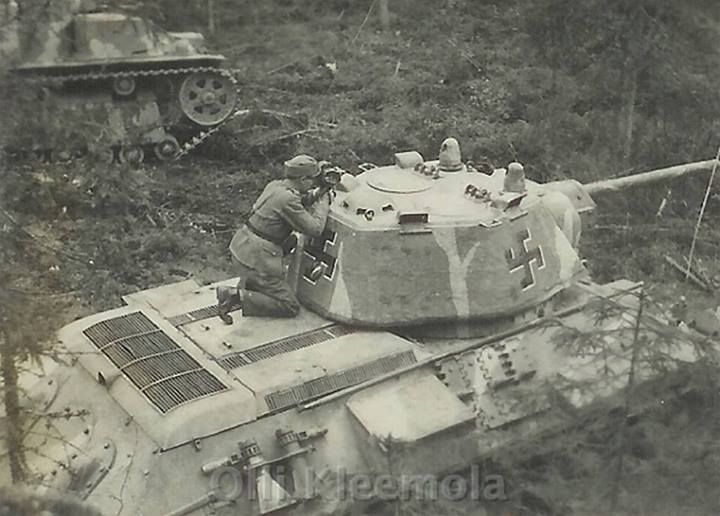 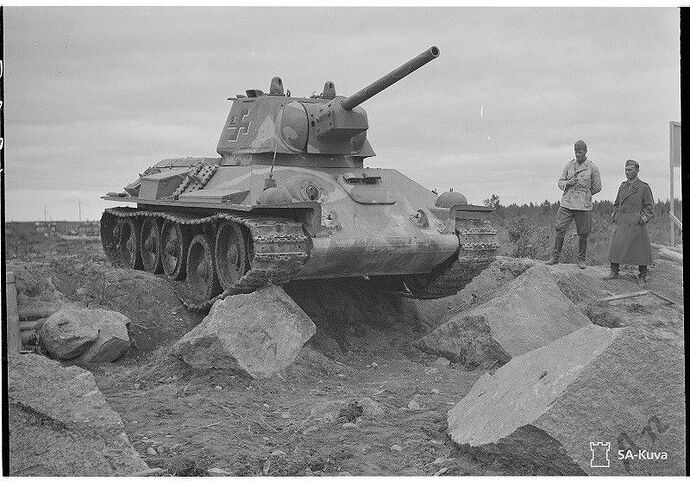 Don’t know but hopefully someone does. What is the bell/domes on the front fenders?

The objects stored on the rear hull side are ratcheting, screw-type jacks. As for the rest of the variations…this will take some research.

The domes on the fenders are armored headlight covers, look at a T-35 for an example.

Those are headlight that can be folded over and thus closed. 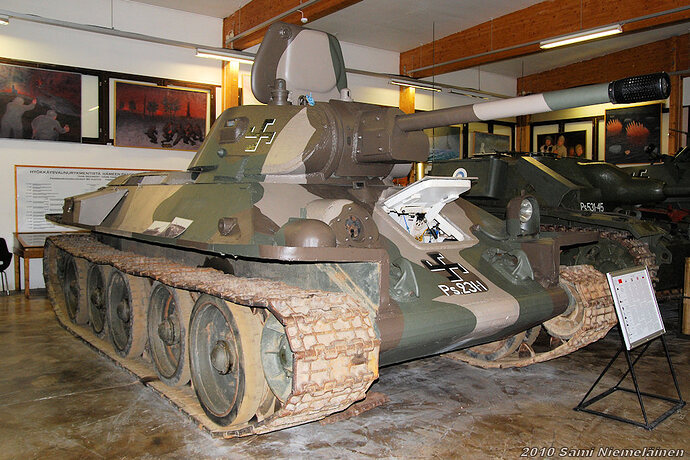 What kind of jacks?
I can not seem to find any pictures of them?

The only thing similar I can think of is again on a T-35.
https://photos.smugmug.com/photos/i-vnGbwdk/0/X2/i-vnGbwdk-X2.jpg

It’s a later production hull, from at least late 1942, when the hexagonal turret was introduced. The access plate on the rear is circular, which was a feature from 1942 on. Also the drivers hatch has the later smaller twin periscopes as opposed to the earlier single periscope. The lack of an armored mantlet over the hull MG ball mount is not unheard of in 1942/1943 production.

But the grills on the engine deck suggest earlier?

Replacement part or whatever was left in the factory before rolling out?

the grills on the engine deck suggest earlier

They could be leftovers from the original factory, or salvaged off of an older tank to make this one operational again. The solid rim road wheels are from early production, like the tracks. The next type introduced was the steel rim rubberless cast type, followed by the later “spiderweb” rubber rim type.

I’m not sure this jack is from a T-34, and it differs from the one in the picture you’ve posted but it’s a rather good match 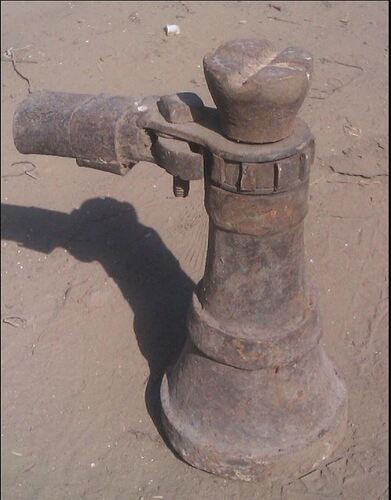 Well, part of the answer has been found, thanks to @Stikpusher 1942 suggestion.
It indeed is a 1942 with a socalled “laminate” turret.
Known in the Finnish army as Ps.321-4, according to Mr. Larka.

Here is a 1940 production T-34 with a good view of the engine deck, which matches what’s in the photo. 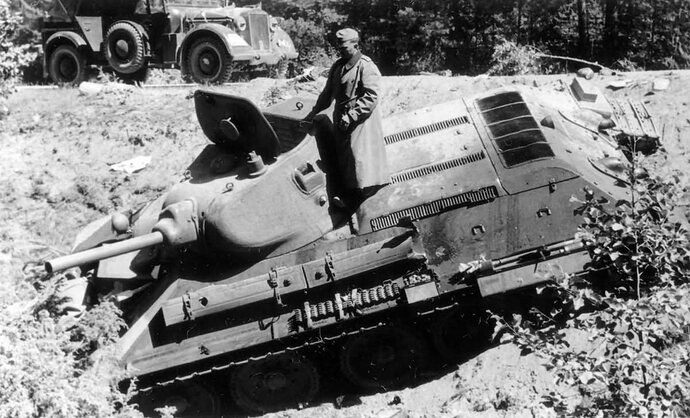 Here is a frontal 1/4 view of a 1941 production T-34. Look at the drivers hatch and the tow cable attachment points 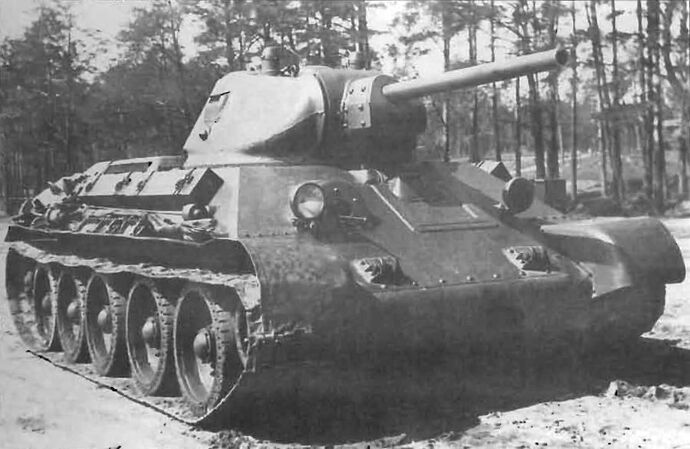 1942 production saw the introduction of the new drivers hatch w/twin periscopes, and the new tow hooks 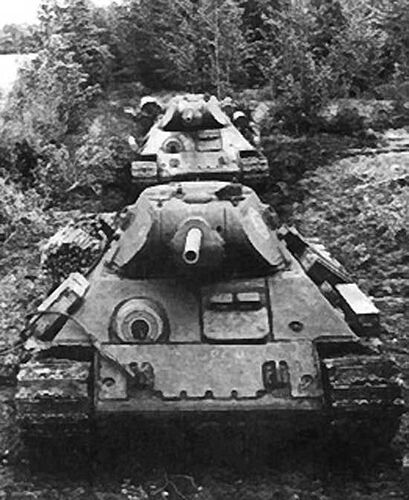 Thank you all for the answers!

I was given Zvezda’s T34/76 and was thinking of making it into such a Finnish version. It would seem that that would be rather difficult and would need a lot of extra parts.
Too bad really.

Although Finnish T34s are a popular modelling subject, it’s worth remembering that the Finns actually had very few of them. There were I think never more than nine T34/76s and nine T34-85s in service and that was in 1945. For most of the war there were just three or four '76s recorded as being in service. The '76s were a mix of early 1940/41 types and later 1943 types with hexagonal turrets. Some of the Finnish vehicles were captured directly but later on, some were supplied by the Germans from their own captured stocks.

Seems spare parts where taken from whatever could be salvaged.

Back to the lights on the fenders. Is there any model kits or aftermarket parts that represents that feature? I don’t recall any T-34 kits and I have not explored T-35’s. Same goes for the engine grill.

Back to the lights on the fenders. Is there any model kits or aftermarket parts that represents that feature? I don’t recall any T-34 kits and I have not explored T-35’s

Similar lights can be seen on Finnish T-50s : 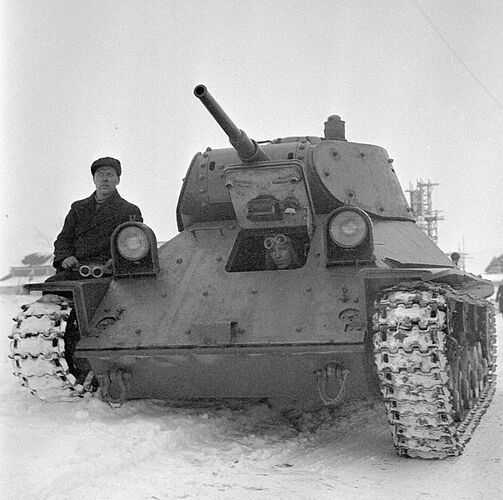 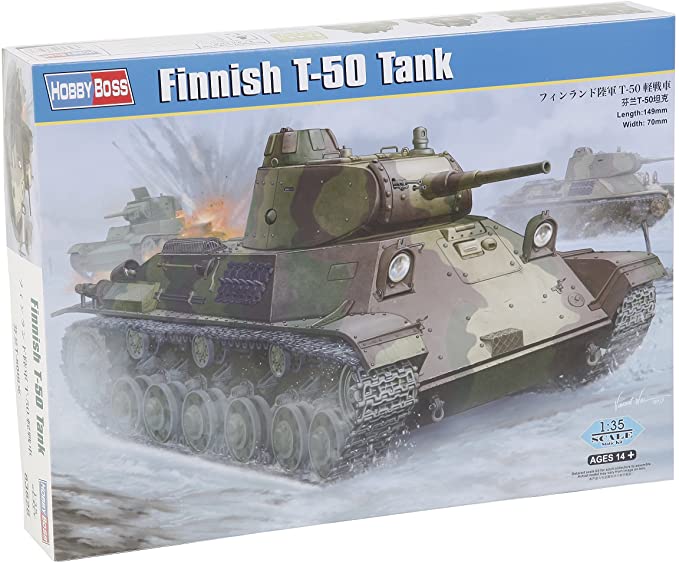 And it has the jacks too! 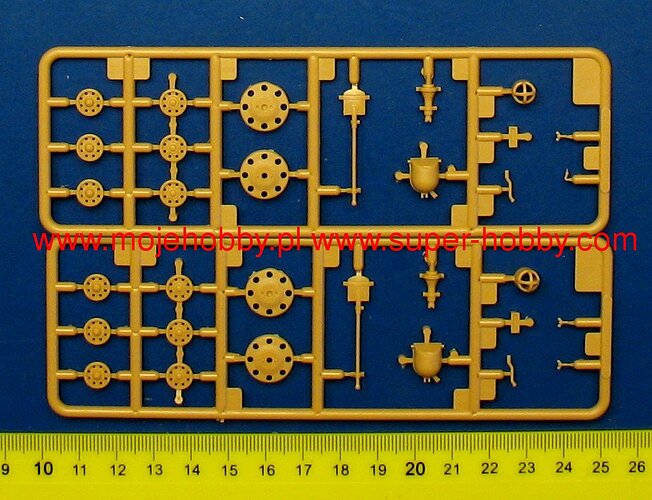 Looks like you can get the Finnish boxing and use the parts for a T-34 and still build a T-50.