Hi folks. Here’s something else for you to look at.

Blame this posting on a comment from Ken about my last submission (The Predators).

A few years ago, I decided to take on a project that I’d always wanted to try – a diorama in a shoebox that used forced perspective to depict a battle scene that included both sides of the event. Generally, that’s almost impossible as modern war just isn’t fought that way.

So, here’s what I came up with, and how I did it. (I actually kept a photographic build log.)

“Here comes another one” depicts an engagement between an LGOP (L-gop) and some German armor. They already took out a Stug with a bazooka, and are now faced with an approaching Panther. 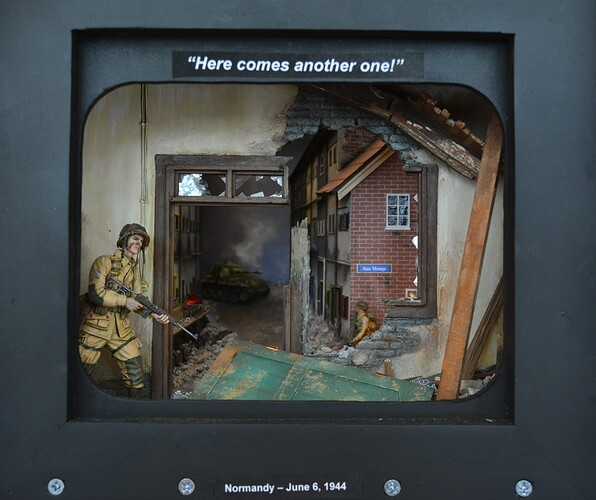 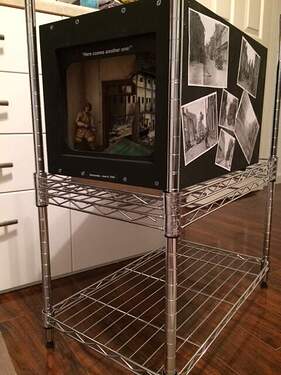 Ultimately, the whole thing was donated to a local High School, where both the history and the art departments reportedly loved it. 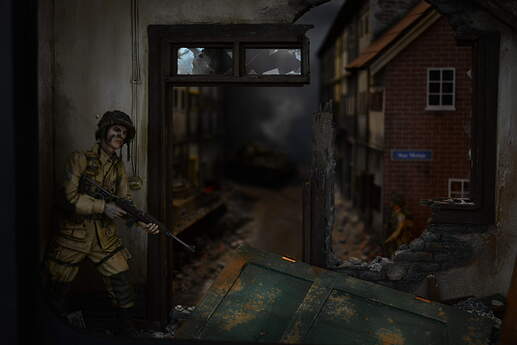 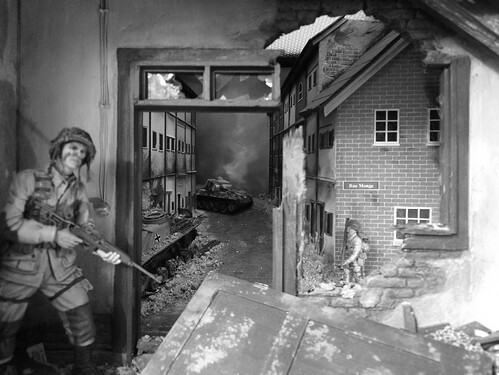 I built the box, and included LED lighting to light the inside, for dramatic effect. (LOL) 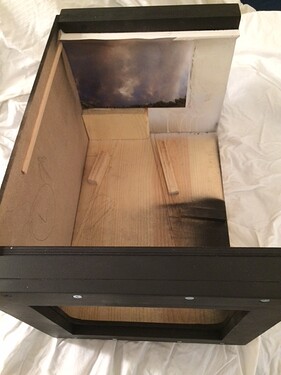 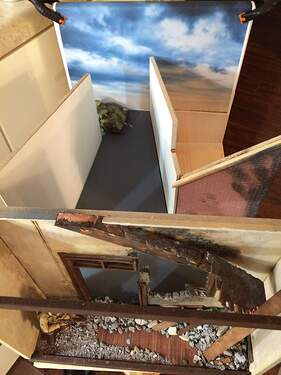 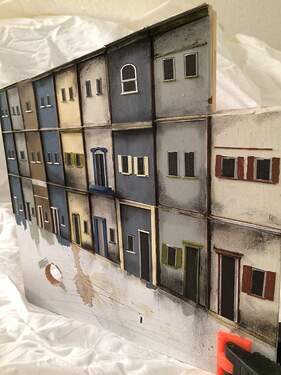 The buildings along each side of the road shrink in their dimensions from near to far, and the roadbed raises, slightly to match. 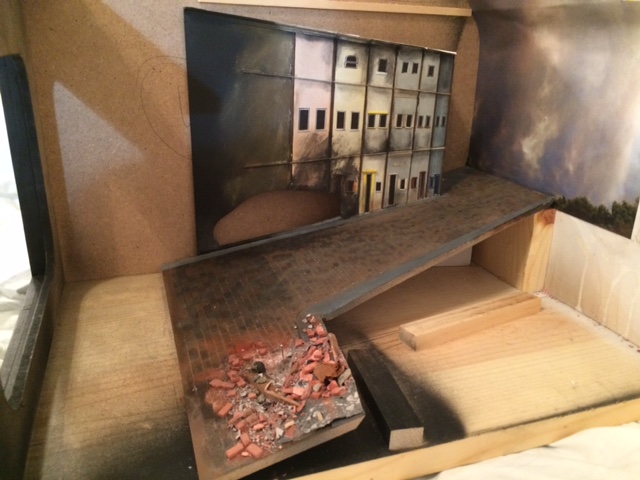 For ease of construction, I built the foreground room as a separate, slide-in, component. It helps that my other hobby is woodworking… 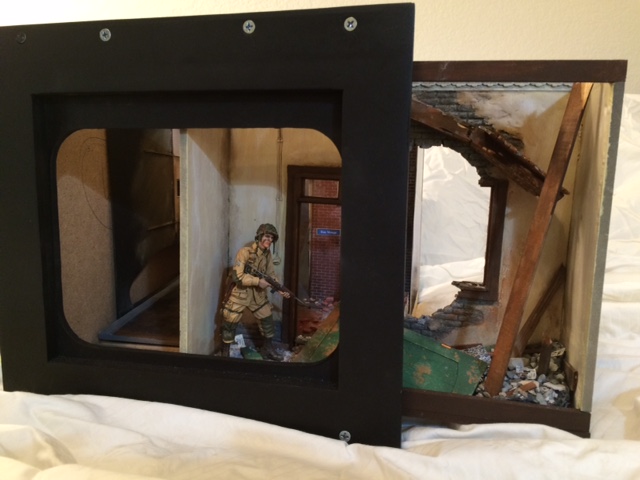 One of the LEDs was a ‘fire light’, mounted inside the wrecked Stug. The wiring passes beneath the woodwork to a couple of battery packs hidden behind the building façade. A switch on the back turns them on/off.
The whole box is sealed closed to black-out the interior. 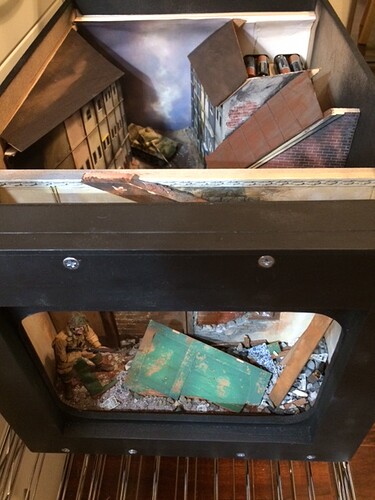 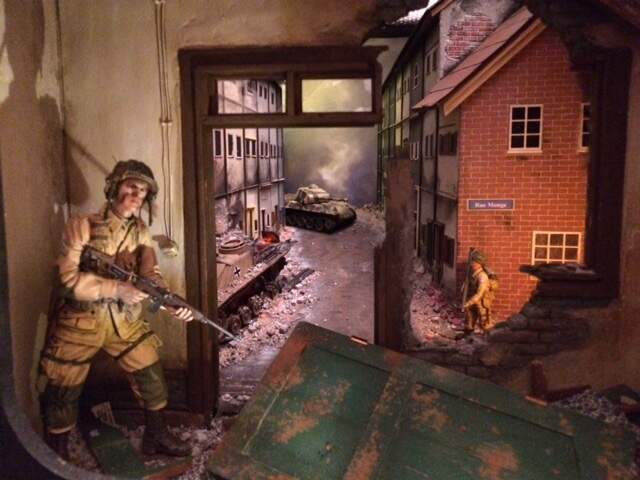 Even the 35mm camera had trouble focusing on the various elements ‘down the tunnel’. (And, I’m not that good a photographer.)

In any case, it was a fun and very challenging project, but certainly a lot of fun to dream up and build. If some one of you ever want to give something like this a try, contact me, I’ll be happy to discuss the mechanics with you.

Historical Note: “LGOP” stands for “Little Groups of Paratroops” and was a legitimate tactical description (as taught at Ft Benning) of the US Airborne troopers who, scattered randomly by the night drop over Normandie, banded together and fought in small teams against any enemy they could find. Airborne!

That looks to be a very complex build considering all the elements represented but
you have done an EXCELLENT job…BRAVO!
Cheers,

Very nice. I’ve always wanted to try one of these but just don’t have the room. Maybe one day!

Very convincing. It’s hard to get forced perspective to look good, but you did a great job.

I was fascinated to see your forced perspective diorama … most impressive!
A rather different subject, but I recently experimented with the same approach
combining a 1/72-scale A6M Zero and a 1/2000-scale USS New Jersey.
The title of the scene … ‘Kamikaze Dive’. 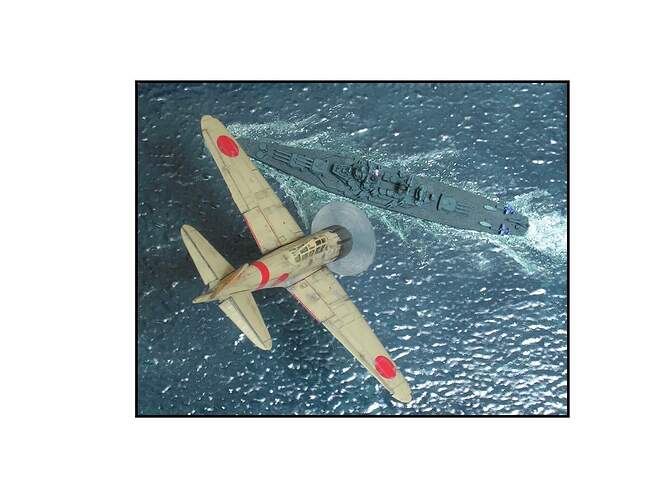 Robin, agreed. But It was that Airborne trooper that was my starting point, and worked backwards (literally) from him. He’s a great figure.
Having built one, I’m not going to try another. Too much work!

Really beautiful guys, both the shoebox and the zero!

I really love dios like this- and boxed dios too. I’ve seen so many inventive takes on the presentation and the subject and this forced perspective is particularly good. The Zero and ship scene is also a great way to show how different scales can be used together like this. Thanks for sharing these.

Nice work! I love shadowboxes as well as the forced perspective approach.

Thanks Jerry. All of your work is fantastic!

Excellent job, its really an good idea to present the dio in this way.
Regards, Omar

Wow! Great job! I wish I could see it in real. You are a true diorama enthusiast that’s for sure.
A shadowbox and using forced perspective is absolutely on my “to do list”.
Thanks for sharing, i get inspired:)
/Erik

Some of the model railroad guys have been using forced perspective for quite a while. Here’s one that I have seen at exhibitions in Europe. My guess it’s only about 24" deep. (600mm).
Google may find a better image. Try Googling ‘diorama forced perspective’.
If you look at the train scales you can start at about 1/150, 1/87, 1/48 to 1/35 scale. 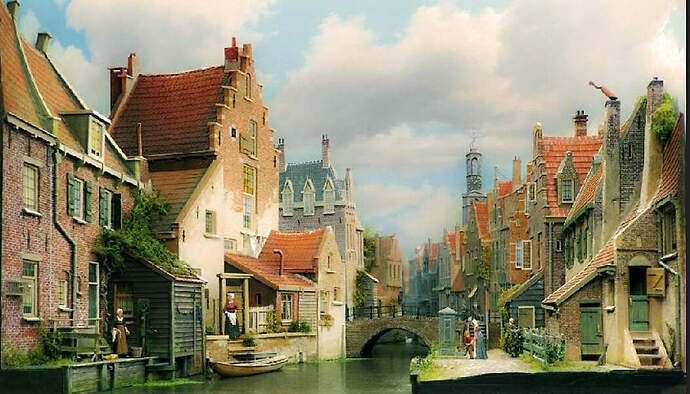 If that canal scene is in H0 (1/87) my guess is around 10 inches deep.
I think the bridge is the last 3D-object and everything behind it is a painting.

@Robin_Nilsson thanks Robin, of course I mean true and not try

I am mostly writing in my phone and the spell check is sometimes tricky if you don’t double check.
@Bravo36 Ralph I hope you have read true and not try