I’d previously said no more Friulmodellismo tracks but Sector35 was out of stock. Finally decided to ordered direct from Friulmodellismo. Shipping was prompt and the product arrived in about three weeksfrom Hungary

The quality of a set shipped in March direct from Friulmodellismo was as good or better than a prior set made in 2012.

Has a counterfieting pirate been wholesaling low grade copies into the hobby supply chain? Basically did some bastards high-jack the brand name?

That would explain why Friulmodellismo pulled distribution back to Direct Purchase only. Requiring direct buy would cut out most of the opportunity to hijack the brand name. We’ve seen a fair amount of Ebay counterfeit figures etc so I can’t help but wonder if that was happening to Friulmodellismo products over the last year or so on a grand scale. Any one in the know?

There’s been a fair number of comments on the forum and other parts of the internet that Friulmodellismo track quality had plummeted over the last year or so. I encountered it with four sets of “new Friulmodellismo branded tracks links” I’d purchased. They were horrible with poor cast quality, massive pour plugs, flash, holes needing redrilled instead of de-burred and so forth.

Here’s the “clean up” residual from a new set of Direct from Friulmodellismo.

Total amount of shavings & deburr flash, a fraction of the mess the last four sets had. 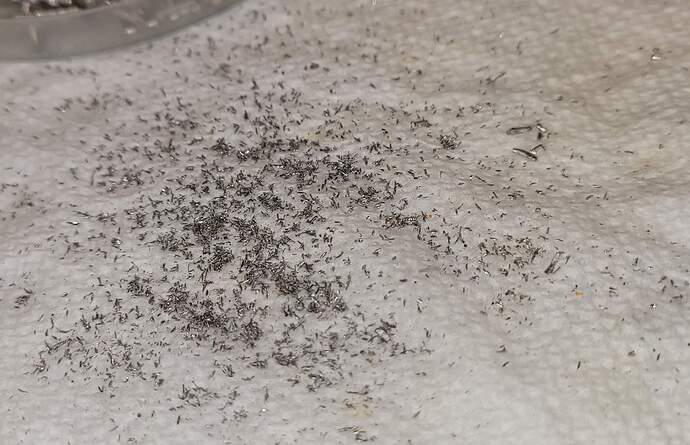 Prior sets had as many as one link out three or four links with nasty casting plugs. Three full plugs and a couple partial plugs. About on par with the high quality older sets before issues occured.

Only three incompletely cast links. All could be used if really needed. This is much better than the ten to fifteen defective links in the four prior sets purchased. 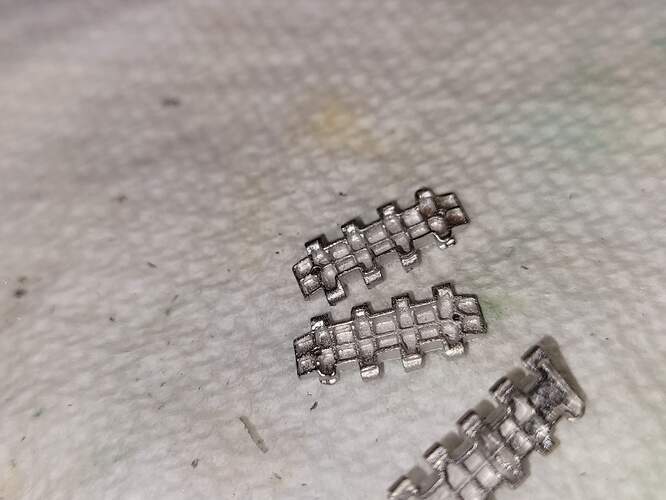 Based on this experience, I would purchase Direct from Friulmodellismo again.

Thanks for the valuable information.

I should also add, I picked up two sets of T-34-85 tracks from Friulmodellismo Direct when I ordered. The second set is just as crisply cast as the first shown above and looks 100% identical.

I think that helps to show Friulmodellismo is being consistent with what’s being produced and sold.

I had a long exchange of messages with the owner of Friul regarding his decision to only sell direct.
The upshot is:
He is the main QC and should be relaxing as he is past retirement age.
He can not get any quality staff willing to work there.
Demand was outstripping supply.
QC was consequently going down the pan.
I too have ordered direct and the quality seems to be excellent.

Upshot is if you want 'em order them direct & quick as if he wants to retire…?

Co-incidentally working on my first ever Fruil tracks ATL-127 Grizzly/Sexton CDP’s, really liking the quality, but they aren’t handed?

Unless the owner sells the rights to make them then at some stage they will simply cease to exist IMHO.
Normally the tracks have holes for the pins on one side only. So to hide them on the inside they are handed if need be.
I am not familiar with the tracks you have but if there is two bags of links then they are handed. 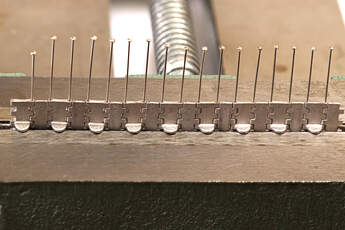 Long, long ago (like 25 years) Friuls were indeed handed. The pin always went in to the inside of the track. Then to cut rising costs and stay in the market, Friul dropped the handed tracks, cutting their mold making costs in half. Now, even though you get two bags, the tracks inside are identical.

@Catsrcool normally with two bags of links the Fruils are handed but that’s not always true. The T-34-85 links I posted have flat links in one bag and guide teeth links in the other. They aren’t handed. It’s the same link flipped a 180 degrees if pins are positioned to the inside.

One thing I’d like to mention in this thread if I may, Wade - is “Friuls that don’t fit!”. I recently purchased Friuls for my Amusing Lowe and my Trumpeter 128mm Waffentrager and the track pitch was wrong on both track sets. They did not fit the kit sprockets, not even close. Friul did not provide a new sprocket with the tracks. These tracks were made specifically for this one kit, as there are no other kits produced of these vehicles. So now I’ve got $100 worth of assembled, weathered Friul tracks that are totally worthless. I tried shaving the sprocket teeth off of one sprocket and gluing them on to match the track pitch - it did not go well to put it kindly. How could Friul market one-of-a-kind tracks that don’t fit the model they’re meant for? I’m out $100 and all that time.

@SSGToms Matt, that’s terrible on Fruil’s part. Fitting the sprocket is about as basic as it gets for aftermarket tracks to be useful.

In some cases, I’ve seem Fruil offer different sprockets etc did they at least offer a solution?

Yeah Wade, I asked them for sprockets that fit their tracks and they didn’t have an answer for me. They insisted that their tracks would fit (it wasn’t a screw up on my part) and I wound up using the kit indy link tracks.

@SSGToms
These are only a few weeks old and the Panther ones are handed and the Tigers are the same each way round so only one bag of each type. 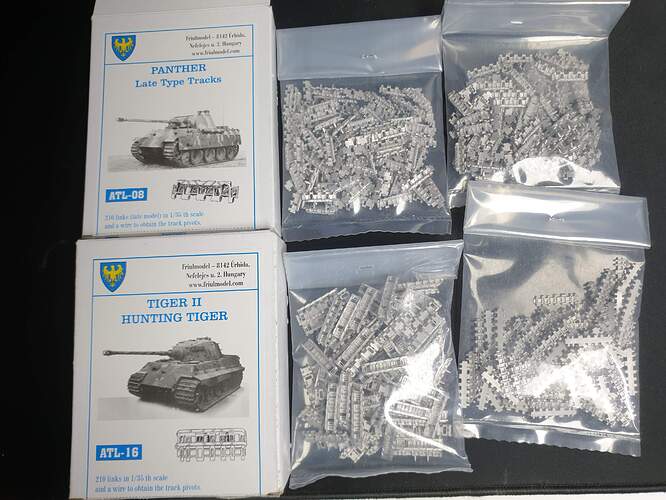 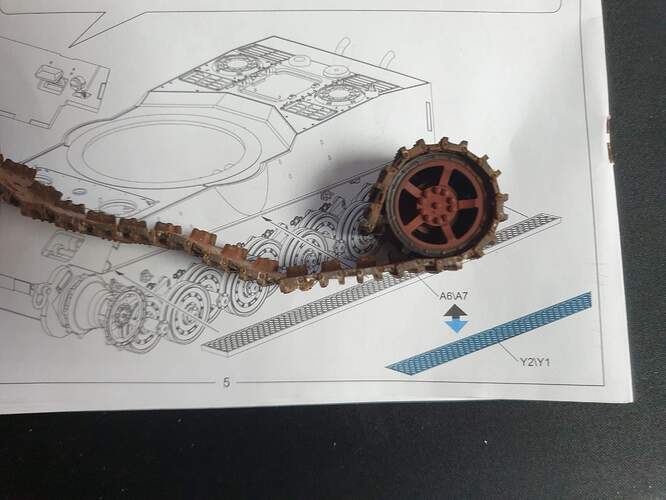 If you got handed Panther tracks then I guess the molds are still good.
It’s still a mystery to me why the Lowe tracks didn’t fit the sprocket. Maybe I got the wrong tracks in the box? Dunno. The model is finished and wearing the kit indy link tracks now. Still want my $100 back though.

While I’m not up to speed on a lot of Paper Panzer details, the Lowe track looks very similar to a Panther II, Tiger II transport track.

I had a set of 1994 vintage Fruil Pz IV tracks back when they used the folding clasps that were handed. Fruil totally Jacked that set up by providing something like 175 left hand links and 55 right hand links.

The only US importer of Fruil at that time was something of a know it all said Pz IV tracks weren’t handed at first. Then after discovering I was well versed Pz IV details with references and page numbers to back it up, said he’d address the issue with Fruil. Maybe he did, no idea but I was left with a Jacked up set of mismatched tracks.

So I know sometimes Fruil doesn’t always get the correct parts in the box. That was probably another example of the company having a hard time finding quality help.

If the owner of Fruil is slowing the pace by going direct and doing the QC that would explain the return of high quality.

Learning he’s past retirement age, I may order a few more sets for tanks that I always put off like the Neubaufahrzeug set.

The ATL-127 Grizzly/Sexton Tracks I have are definitely NOT handed, two bags of the same track.

I will have to cut the pins to the same length first to make them consistently tidy, only done one side yet.

The supplied track fits the supplied metal sprockets, but haven’t started the kit yet! 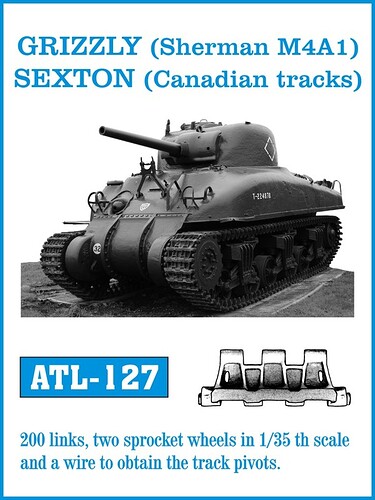 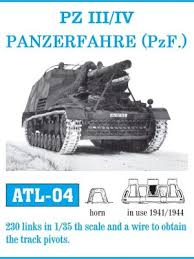 …and 38cm ones even more so

One thing I do not appreciate is having to pay VAT to a country where I am not a citizen. Many vendors do not add this charge but I see that it is added to the cost of these tracks. I oftentimes wonder if they charge us non-eu buyers with the tax as their additional profit. They’re not the bargain it seems if you order direct.

I built these a few months ago and even though I had to drill out each link they still look awesome when finished!

Are you building a Grizzly or a Sexton?