My current race car build is once again another Porsche, so what else is new? This time it’s the Fujimi 1/24 scale Porsche 917K that raced at the 1970 24 hours of LeMans. Instead I decided to make the small corrections needed to convert it into the #2 winning John Wyer Automotive Gulf Winning Porsche 917K at the 1970 Daytona 24 hours. The JWA Gulf 3 car Porsche 917K team placed 1st and 2nd. Here’s the winning car pre and post race. One thing is for sure, it took quite a beating over the 24 hours. 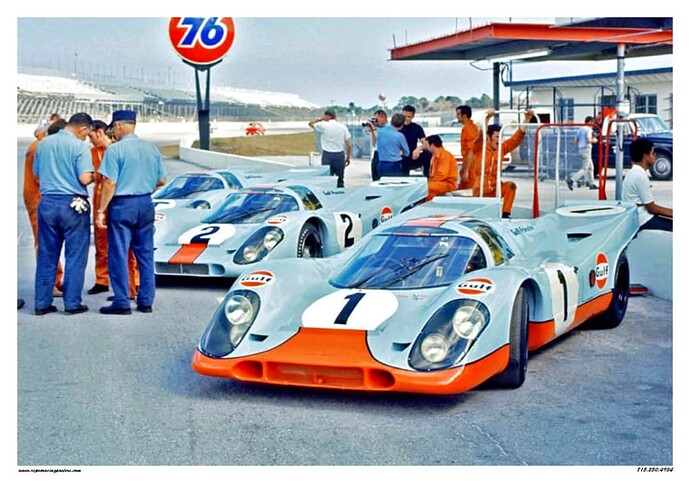 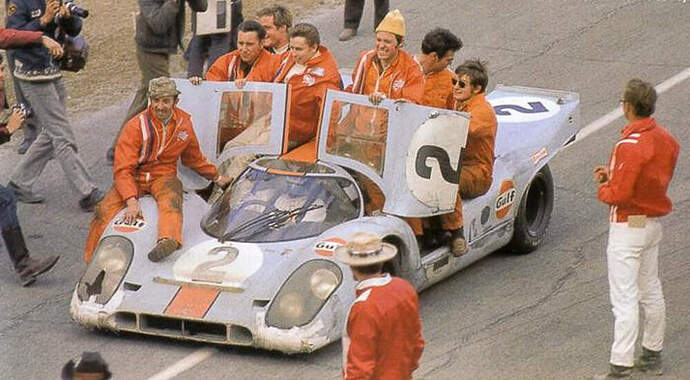 For the most part the major difference was leaving off the small spoiler/wing at the rear of the engine deck. 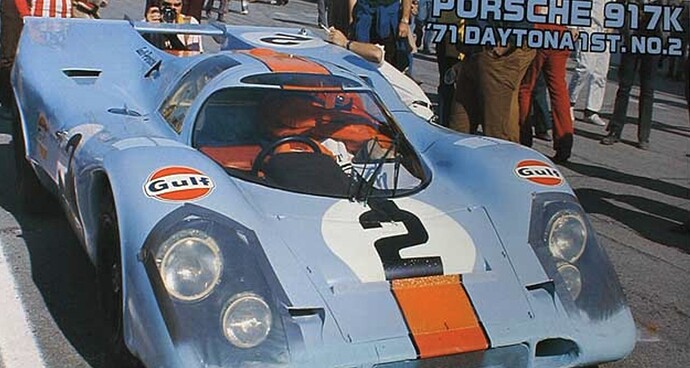 As I studied pics of numerous 917Ks, there’s a few differences whether the Daytona winning car actually had the right side ID light installed, which it did, and just how was it installed. Fujimi just gives you a lens and placement guide, but that’s incorrect. The actual light is in a light receptacle attached to the inside of the engine cover, and just the lens is on the outside. 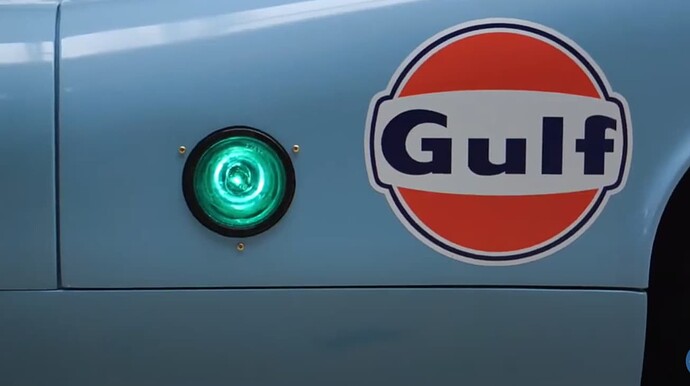 So I drilled a hole in the proper place, then using a few parts from my spares box, and some sheet plastic, made the light fixture. Here’s the part and how it looks just temp tacked in place. I won’t paint and glue it in place till after the body is completely painted, decaled, and glossed. 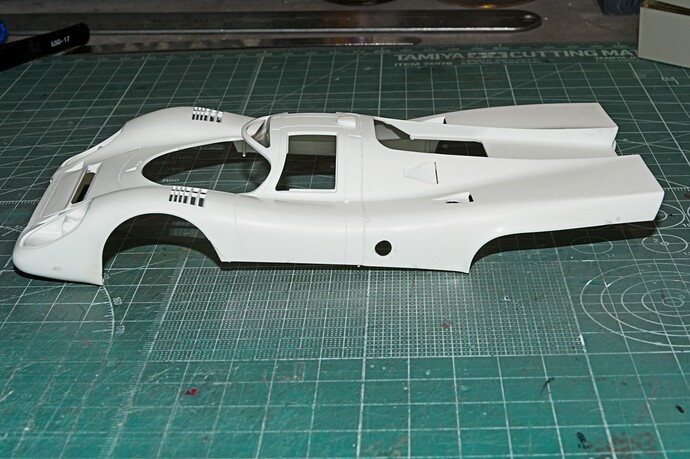 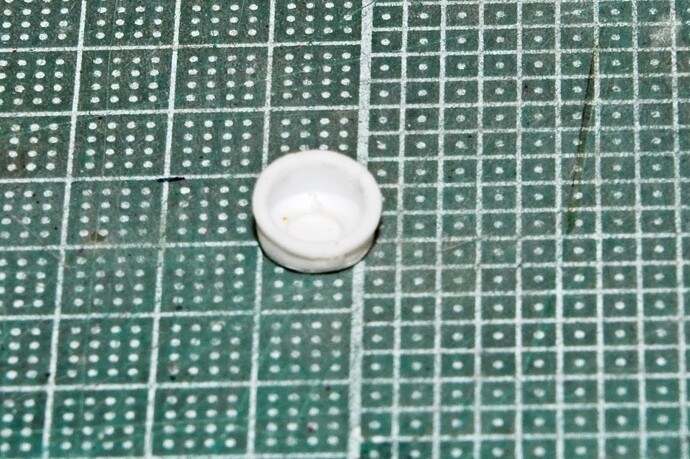 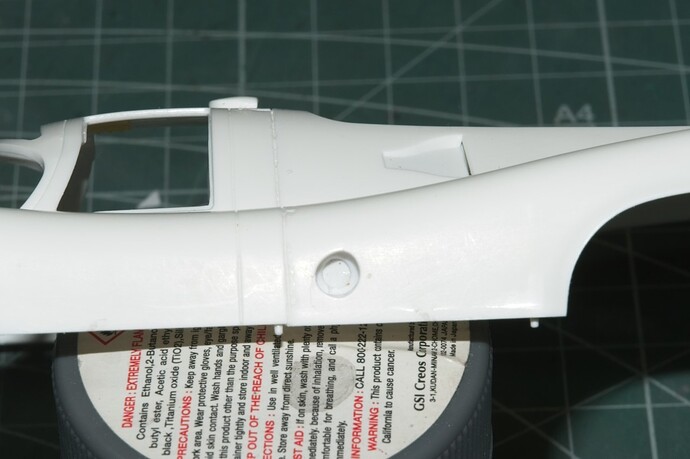 I started the body shell by gluing the front lower nose section to the cockpit section. The fit was ok, but needed contour sanding to blend it in so that it looks like one piece. The front compartment that houses the steering linkage, brake, and clutch Reservoir cover was warped and just way to thick. So it never fit correctly despite my best efforts. I glued it into place, and sanded it down so that it fit correctly. I also removed the 8 fasteners that on the real cars secures it in place as they unfortunately looked like plastic blobs and nothing more. I’ll come up with either some Indy Cal decals to represent them, or PE, but gluing them on after paint and polish isn’t one of my stronger points, and I just could create a major issue 8 times over. I also thinned out the spoiler on the cover as the molded one was just way to thick and chunky looking. Sorry that the pic really doesn’t show it correctly. 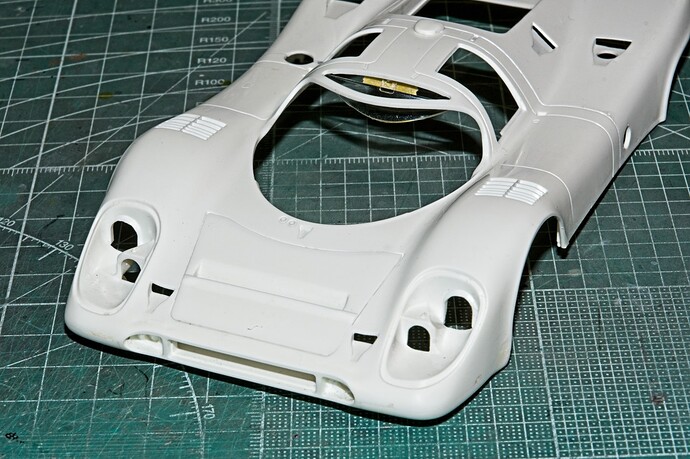 The Gulf Porsches all had that top window rather then a solid roof. Test fitting was a little rough but it was easy enough to get it to fit, but not 100% flush. Pictures do show that it’s that way on the real car as it looks liked a bead of caulk was applied all the way around. So I’m going to leave it off till after the body is finished. Hopefully I won’t screw it up installing it. 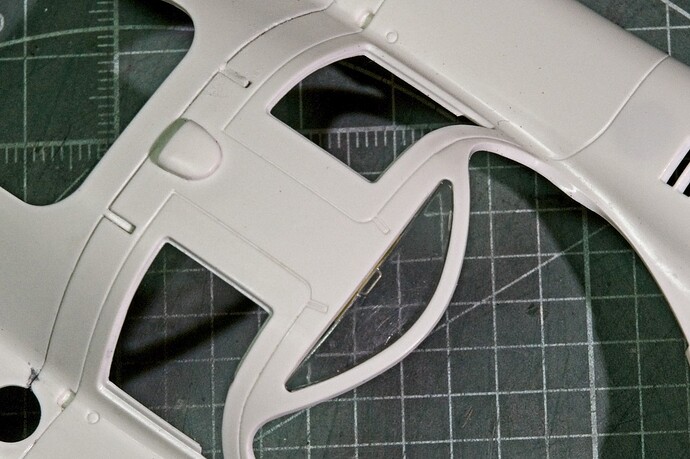 The last issue I needed to figure out is why some 917Ks have what is actually an electrical outlet to plug in an extension cord to supply electricity. Turns out that it’s for a heater pad that is on the bottom of the oil pan to heat the engine oil as well as the oil in the oil tank. Some cars have it on the outside of the engine deck while others have it attached to the frame. Doesn’t really make any difference as once the oil is heated up, the engine cover needs to be opened up so that Brake fluid can be added to each velocity stack to fire the engine up. So I won’t be using the decal that Fujimi supplies to represent the housing on the on the outside of the engine cover as none of the 3 Wyler Gulf cars had them. 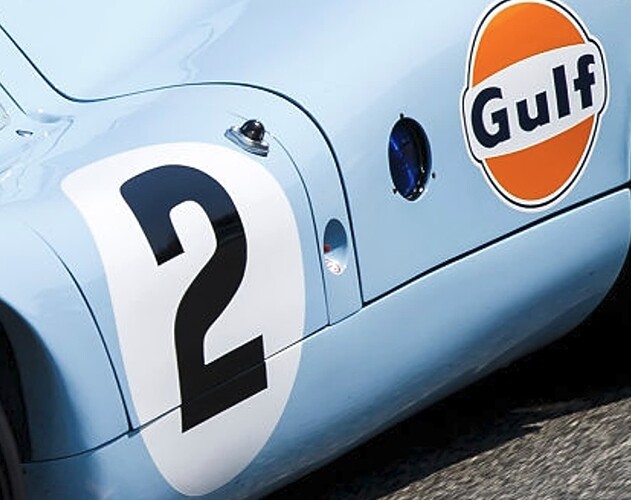 Fujimi does supply a decal to represent it, but it’s square not round. And while I have several pictures of different shapes, none are a box shape.

Just about done prepping all the various body pars needed to paint, decal, and gloss coat the body shell. It’s taking some time as every piece seems to have a little flash including every suspension strut.

Ryan,
Glad that you stopped by and liked my 1st little update.

JA
Great opening round and start on the Porsche. Always appreciate the historical research that brings the build into focus. Nice work on cleaning up the exterior shell and determining what the outlet was for and the ID Light as well.
No question, even back in the 1970’a a big part of the winning formula was the use of duct tape - the front clip seems to be held together by it by the end of the race.
Also noticed a few scratches in the upper window and might be a bit tough to polish it out if you leave it for later.
Bro

Good to see your new effort .
So the burning question on my lips is :
Are you going to build it shiny pre race condition or beat up post race ?
Post race might be fun to try … ( hint hint )

Good start Joel and some great information. The 917Ks in a Gulf colour scheme are of legendary and I look forward to you putting this kit through your build process. Should be something amazing by the end.

Somewhere in my decal stash I have 1/24 Hippy whorl 917 decals
Would you be interested ?

Hey Bro,
I’m thrilled that I got your thumbs up so far on the build.

I’m still debating if I should glue that hood window in now, and carefully putty it in. Then sand and polish the heck out of it. I’ll have to make my own masks as I intend to have several as backups, and I’ll need them also for the interior side as well.

Yep, even today Duct tape is a teams best friend.

Russelle,
Always great to have you along for another one of my adventures. Who knows where this one will eventually led?
joel

Richard,
I’m more like Torsten of a museum builder type of guy. Believe me, the thought did cross my mind about modeling the car as it finished the grueling race. But being a Porsche guy, I just can’t bring myself to do it. Now if it was a Ferrari, the odds are way better.

Michael,
Glad that you and my brother both like my little history lessons for each build. I really got the idea from Torsten as his lessons really helped me understand his builds and their importance behind them.

Agreed, that the JWA Gulf Porsche 917s are truly iconic even to this day, with the original #2 winning car sold for 14 million or so. Naturally, I wasn’t the buyer as I was short just shy of 14 miiion give or take a few bucks.

The K was developed actually right at the track as the car in its basic factory shape had almost no air flow over the rear deck and the cars were almost impossible to drive at speed. The quick fix worked and the K was born.

Porsche actually modified the K to 1st an L and later the LM for LeMans and other long tracks like Spa. The K version was used on Medium fast tracks like Daytona, but wasn’t so good at short twisty tracks including Sebring, so Porsche spent more time refining their 908/3 for those type of courses. I was lucky enough to watch Joe Siffert drive a Porsche 908/3 at Sebring back in the 1970s.
joel

Patrick,
Thanks for the offer. Not sure when I’ll get around to building my 3rd 917, Can you see if the decal sheet specifies when model 917 it’s designed for? The 917 was produced in K, L, and LM versions.

Bro,
I see your point, but then the window would actually look better then it did in real life. I think I’m still better off with a later after the body is finished install.

One of my all time favorite race cars.

I will follow the build and the history lessons, with great joy

Jesper,
Always appreciate it when you’re along for the ride.

Great to see another classic hit your bench Joel, looking forward to progress reports and history lessons along the way!

D,
Welcome aboard. It’s always great to have you in my corner. Tried to model today but as soon as I started to bend my wrist and apply a little pressure I started to fill a little strain and played it safe. I’ll keep on testing everyday till it’s a go.

By the way, I’m kind of going to the Dark side for a few builds this year but not MFH kits. Way above my skill level for sure. But Profil 24 (that’s the correct spelling) makes limited run resin kits of past and present tin tops not kitted by the injection mold corps. So this is going to be a whole new process for me. ]