Batting around the idea of building a Gestapo sedan. Did they use "POL**** " police plates, like the Ordnugspolizei, or civilian plates? Any ideas? Also, would they have used that sinister gloss black or had Dunkelgrau paint scheme?

I get the impression that Gestapo was a subordinate unit within the SS:

The Geheime Staatspolizei (transl. Secret State Police), abbreviated Gestapo (German: [ɡəˈʃtaːpo]; /ɡəˈstɑːpoʊ/), was the official secret police of Nazi Germany and in German-occupied Europe. The force was created by Hermann Göring in 1933 by combining the various security police agencies of Prussia into one organisation. On 20 April 1934, oversight of the Gestapo passed to the head of the SS, Heinrich Himmler, who was also appointed Chief of German Police by Hitler in 1936. Instead of being...

specifically a part of the Sicherheitspolizei:

so I guess they would have used SP licence plates.

Trivia: Gestapo had what is nowadays called “qualified immunity” …

That being the case, the POL plates would probably be the bet. I remember reading that when Himmler took over the police, fire and air raid services all became “Polizei”. I know Feurwehr rigs had POL plates. I was thinking maybe they used civilian plates to keep the “secret” part. A car “POLICE” on it and two guys in suits inside tends to make one think “They suspect me.”…

Pol was used by uniformed police and emergency services

Secret police (including Gestapo) used SP.
When they went undercover they would not use vehicles with SP plates.
If they used vehicles at all they would have to be civilian and using gas-generators.
Gasoline/Petrol or diesel was reserved for the authorities so a car using those fuels would be suspicious

I too was working on the idea of a sort of SD-type arrest dio, albeit in 1:72; anyway, I came up with this image from somewhere which would seem to indicate Police registration plates: 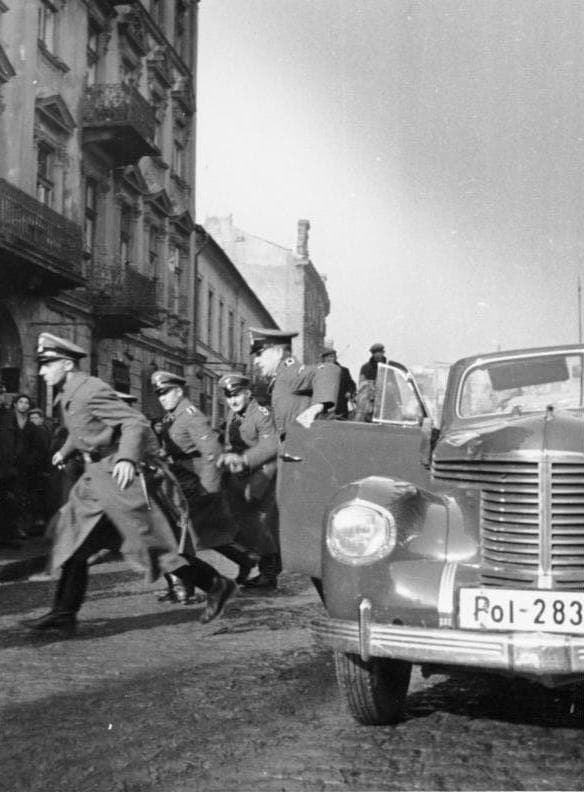 Those guys running would be regular uniformed police, not the secret variety.

Secret police try to stay secret by not wearing uniforms.
If Gestapo officers occasionally wore a uniform for some officla occasion they would have been wearing SS-uniforms.

Saw your reply.
In the occupied areas they wore the field gray uniform of the SD.
The II CV was favoured by many, including criminals in pre-war France …

However: I would go with civilian plates even if civilian vehicles were rare, most having been requisitioned for military service.

Given that the SD (of which Gestapo and the KriPo were the two main parts) had their own license plate prefix it would be strange if they used Pol-plates when they were being official and visible.
Going sneaky they wouldn’t use neither SD- nor Pol-plates.

Not so; they are wearing SD insignia which could mean that some are indeed Gestapo, as I understand that when required to wear uniform (for whatever reasons) they wore SD stuff.

One might think that the SD, or all the Nazi security organisations, would use SS number plates but now I wonder.

For more covert operations I would have thought that the Gestapo would use civilian registered vehicles in order to blend in; their favoured workhorse in France being I believe the Citroen 11CV, however, never underestimate the German desire for order and a German registration would - bearing in mind this characteristic - make sense even at the expense of operational effectiveness perhaps. Mind you, as most policing (of occupied countries) was based on sheer terror, subtlety may not be required much. 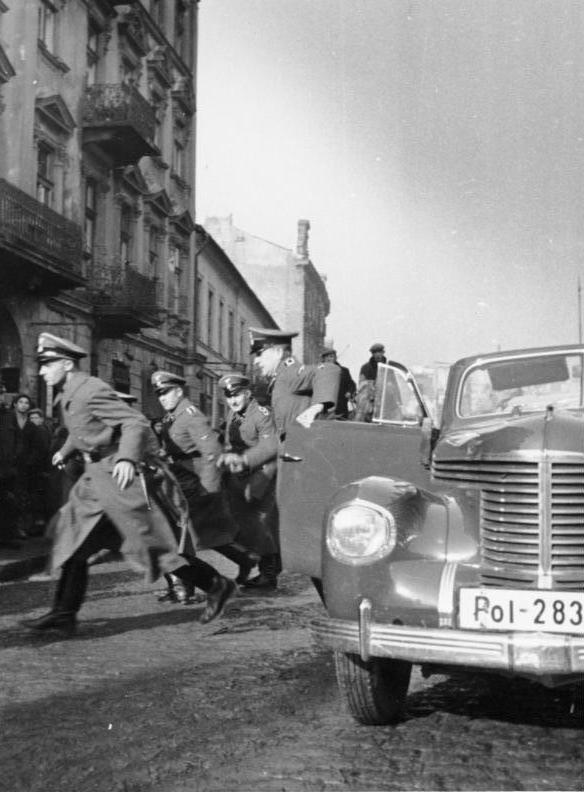 Gestapo only operated in Germany → needed to be secretive → go in civvy-clothes and avoid swanning about in easily recognisable vehicles. 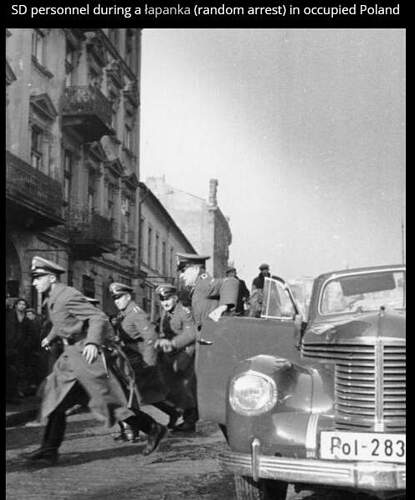 Here we usually rather call it the “Traction-Avant”, or even just “Traction” (on a side note there were also a 7 CV, a 15 CV and even a 22 CV variants…)

Gestapo only operated in Germany

Unfortunately, the Gestapo operated in occupied France as well…Klaus Barbie for instance was the head of the local Gestapo in Lyon :
https://en.wikipedia.org/wiki/Klaus_Barbie

…and for another example, in Prague 1939 Karl Hermann Frank “…controlled the Nazi police apparatus in the Protectorate, including the Gestapo, the SD and the Kripo” (Wiki)

@Frenchy @Dioramartin
You are right.
My mistake, I trusted one single source,

Been there done that, repeat offender. Apropos nothing, Gestapo is an anagram of Postage

Well, they did arrange one way transportation, totally and completely without any ‘return to sender’ option …

hmmm & things got sticky if they got onto you

Tempranillo, what of it?

notice that not did