Found this today in a news ticker …

The so-called Ghost of Kyiv has apparently been shot down. This is reported by the British Times, citing an unspecified Ukrainian source. The Ukrainian fighter pilot was dubbed the “ghost of Kyiv” because he is said to have brought down numerous Russian planes from the sky at the beginning of the war - there was talk of 40 - but his identity remained secret.

Now the “Times” has published his name and age: The fighter pilot is said to be 29-year-old Major Stepan Tarabalka. He was shot down on March 13 while fighting “overwhelming” enemy forces.

Already on the first day of the war, the pilot was credited with shooting down six Russian jets, which made him an instant legend. The Ukrainian General Staff later posted a photo on Facebook purporting to show them in the cockpit of their MiG-29 jet, saying, “Hello Russian occupiers, I’m flying to take your soul - the spirit of Kyiv.”

At the time, many people questioned whether the “spirit of Kyiv” really existed. The 29-year-old leaves behind his wife and eight-year-old son.

The Ghost of Kyiv REVEALED!
By Ward Carroll, who flew F-14 Tomcat’s for 15 years and popular author.

My sincere condolences to the family. RIP Major Stepan Tarabalka.

I highly doubt it would be possible to shoot down 40 russian airplanes in a technically inferior aircraft against overwhelming odds. What is the current confirmed shoot down record for jet versus jet fighter? Must be someone from Korean war?! By the way - the ultimate jet fighter pilot of WWII is still Kurt Welter, a german Nightfighter jet Pilot who managed 63 victories altogether, 25 of them with a jet.

If helicopters are part of that count, yes it’s possible to make 40 kills in an “inferior” aircraft. Remember the North Vietnamese had multiple aces flying inferior Mig-17s. The highest scoring ace of the Korean War was Russian, and he shot down more US aircraft, over 20 I believe, than the top US aces, although his tally escapes me at the moment. The Israelis have some jet aces from the 60’s, 70’s, and 80’s that are high in kill counts as well.

The highest scoring ace of the Korean War was Russian, and he shot down more US aircraft, over 20 I believe, than the top US aces, although his tally escapes me at the moment.

I believe that was Nikolai Sutyagin credited with 22 victories.

39 IAF pilots became aces, ten of them shot down more than 10 planes each. Giora Epstein was credited with 16 Egyptian jets plus a helicopter, making him the highest scoring IAF pilot.
From 1948 IAF pilots have shot down 687 enemy planes in aerial combat, losing 25 of their own to them.

I was mostly thinking about 152mm and 122mm arty rounds. Is it me, or is there a lack of mortars over there? I wouldn’t wish the M2 Browning on them, as it has serious issues that take awhile to overcome. The SAW (do not know the number) would work well, but now I’m seeing a lot of 350 to 500 yard shots going on. That’s where three dozen Savage 112V rifles chambered in 7.62 or better yet 7.62x54 would be a game changer (yes I know they don’t chamber that round).

Surely somewhere in the states there is a warehouse full of surplus 4.2" mortars! Or 90mm recoiless rifles.

Awhile ago I watched a Ukrainian arty barrage and it was nice but also completely done wrong. The patterns looked like shot gun patterns on a bad day. They are training arty officers as I write this along with a bunch of NCO’s, and this will be a major boost for them. The guns are not being laid right from the start, and you see it down range. Just that alone will ruin Ivan’s day, and make their shooting much more of an impact. Right now they are wasting 65% of the munitions of shots that go out in the middle of nowhere. Yet the other 35% are impressive. Remember 85% of the KIA’s on the battlefield come out of arty, so make it work for you
gary

I have no serious idea who holds the record (s). This I do know. Robin Olds is not a credited ace in Vietnam, but it is well known that he shot down between seven and nine NVA planes. Virtually everything after number four was given to somebody else because of politics.
gary

I highly doubt it would be possible to shoot down 40 russian airplanes in a technically inferior aircraft against overwhelming odds.

~40’s definitely a lot, my first thought was were planes on the ground counted or squadron’s total kills as was sometimes allegedly done in WW1. We probably won’t know the full details and truth until after the war and then if and only if Ukraine wins.

If training, experience & expertise is equal, shooting down 40 russian airplanes in a technically inferior aircraft against overwhelming odds would definitely be an outlier in expected results - full agreement here. However, if the technically superior foe suffers from inexperienced, poorly trained pilots and incompetent leadership that is a different situation. Based on the information at hand the training, leadership and effectiveness doesn’t appear equal between the two sides. Otherwise the war would have been over with before the end of March, or in like two weeks or less (in my opinion) as Putin probably hoped.

Basically, the Ukrainian’s in the role of iron men & wooden ships vs wooden men & iron ships sort of scenario.

I’m afraid that the blue-yellow ones will not even have a minimum ace score of 5 units. Even with helicopters. Whatever myths they make up. 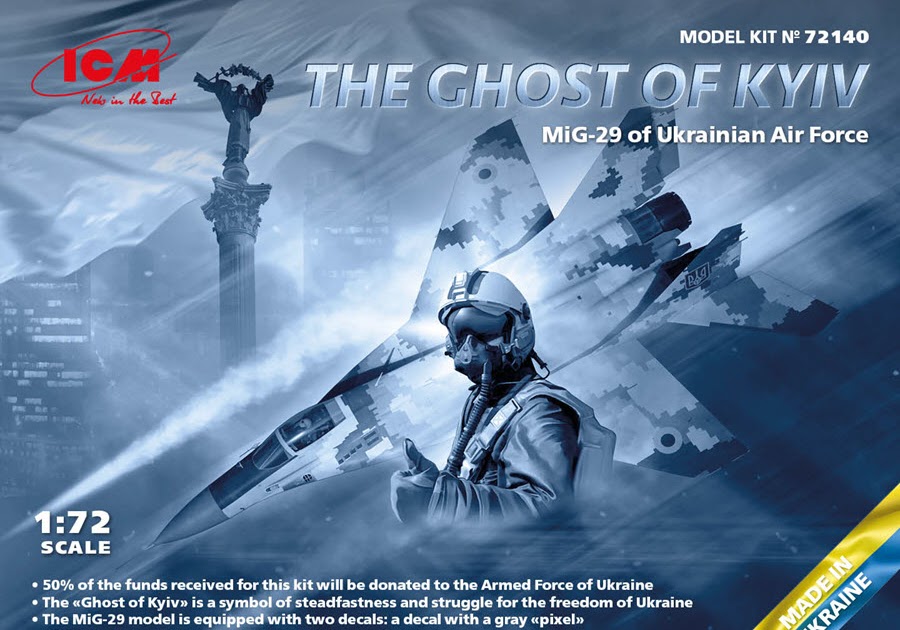 Preview: The REAL "Ghost of Kyiv" appears in model form from ICM

Well, looks like I’ll be branching out into 1/72 scale jets. How is this kit? I’ve never built anything from ICM.

I have the kit but not built it.

This suggests it’s good despite some accuracy issues. At least that was my quick read on it.

I have no idea if 40 is a “realistic” number. But. But if the ratio of tank/afv’s is any indication it certainly seems possible.

Speaking aerial victories in a short amount of time this is pretty interesting:

In WW2, Emil Lang shot down 18 Soviet fighters on 3 November 1943, the most kills on a single day by any pilot in history.

Look at the website of the Armed Forces of Ukraine (he does not let me through as a Russian), it seems there is fresh material on this topic. I myself am interested.

Once again, we ask the Ukrainian community not to neglect the Basic Rules of information hygiene, not to give out wishful thinking, and to check the sources of information before distributing it.
And the hero of Ukraine Stepan Tarabalka is not a “ghost of Kiev” and he did not shoot down 40 planes.
On March 13, 2022, major Stepan Tarzbalka died heroically in an air battle with the superior forces of the Russian invaders. Here is information about it on our official page: Iir5:/d\MU/.yaseeok.WTO / kr52 и and / ro5i5 / 3394622915550b9.
The ghost of Kiev is a superhero legend. whose figure was created by the Ukrainians! This is rather a collective image of the pilots of the 40th tactical aviation brigade of the Air Forces, who protect the skies of the capital. Who suddenly appear where they are not expected.
and military pilots are not yet studying abroad on the G-16, no matter how much we all want it.
Not a single official statement on this issue was published in the media!
! And finally, for those who are particularly creative - American bombers also do not fly to the north of Ukraine!
Stay calm and use official sources of information. 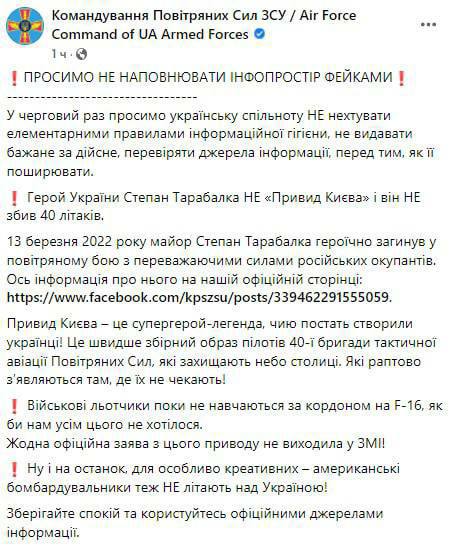 This record is inflated. Analysis of his record day based on the documents of BOTH sides, gives 3-4 REAL victories