The Hunley was a four-foot diameter submersible iron tube that has the somewhat dubious distinction of killing 21 of it own crew and being the first combat submarine to successfully sink an enemy vessel. Technology FTW.

…been working on this little guy for while, and now have the hull nearly done. The Micromir kit is kinda mostly accurate, the fit is okay and the details uhhmm… enthusiastic? Micromir have a wonderful selection of esoteric subjects produced in what I would guess is a fairly limited run style. The details (and plastic) are a bit soft but there is a bit of photo etch to help and even some masks for the transparent bits.

Seems unlikely that there will be a more mainstream kit anytime soon and this little guy can be built up into a nice model without too many tears. Okay, tears may still occur, but I’m not finished yet.

Here’s the model as it currently is:

There were approximately three million rivets that I needed to replace after I’d sanded the seams, which was annoying but totally worth it. Micromir would have you build the hatch hinges from a bunch of fiddly photo etch. Similarly, the propeller had blades to be butt joined to the hub and an annular surround need to be curled up from a flat piece of brass which I was not completely convinced I could do it’s proper circular justice. Me and photo etch don’t have an amicable history. sigh. 3D printing to the rescue. 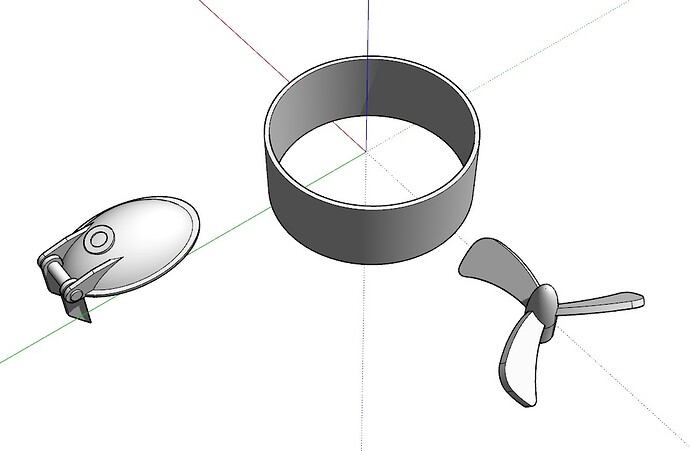 That seemed to work. 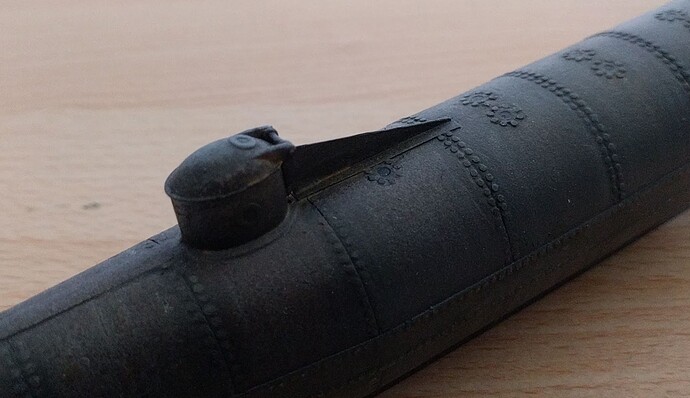 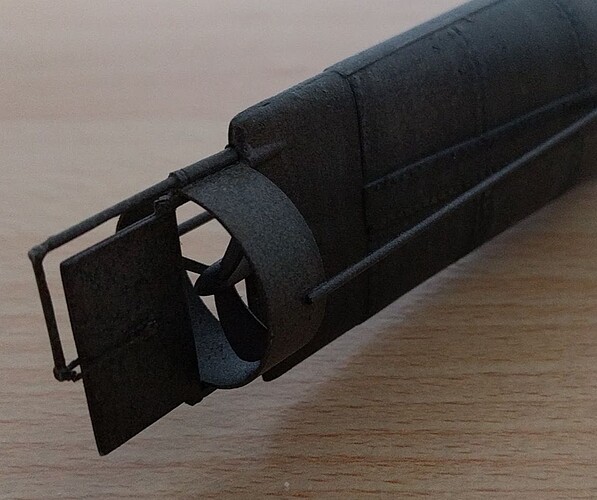 So far the paint is trying hard to not be boring. Rusty black. But not super rusty.

Next up I shall tackle the spar. Which also has tackle.

…Also also, there doesn’t seem to be a category here for pre-war not sailing ships. Ironclads and pre dreadnoughts and wotnot.

Great subject, great build & that paint looks so right, you’re doing a brilliant job. I’m sure you won’t want to do it but it gives me the idea to put a sub in a bigass block of clear resin! Mate sorry to fact-check you but the Hunley sank with eight aboard, not 21…

The dead submarine crew hadn't moved from their stations for nearly 150 years. Now, some scientists think a shock wave could have damaged their insides and caused a swift death.

Yes. The Third Time it sunk it took all eight crew with it.

and the second time.

…and Five the first…

Aha I should fact-check myself first right?! My apologies…so how insane/brave would the 2nd crew (including the inventor Hunley himself), and even more the 3rd crew have to be after they raised the sub both times to try again? Appropriate (whatever one’s own beliefs) that the final crew was buried with full Confederate military honours in 2004, 140 years & 2 months later

I heard that the third crew wasn’t quite as “volunteering” as the first one,
they more or less had to be forced …

I know Right? I’m not a claustrophobic kind of chap, but I’m not sure you would have got me in there even for a laugh.

I’ve textured the hull a bit before painting to give it a more pitted, old metal look. Not that this wee thing would have had time to get old. There is also some conjecture regarding the bend in the bow casting, i.e.: whether it was there or not. I went with, because it’s more interesting.

You have done a great job so far!..thanks for posting pics of your build.
Cheers,

Looking good, one of my amps members is building one. I believe he officiated the 2004 funeral. Interesting enough he mentioned the title is wrong as it wasn’t a CSS ship but a private ship. A story about Thurman keeping the ship in SC and them still finding remains inside. A tooth was found not long ago.

This has been on my “interest list” for a while. Good to know about having to replace rivets. Who’s did you use, Archer?

Maybe a little confused. Although Thurmond died in 2003 after the Hunley was raised, he had nothing to do with the Hunley remaining in SC. At the time the Hunley was raised in 2000, it already belonged to the state of SC. By then, it was also already on the US Parks Service registry of historic places (and had been since 1976). (Its location was discovered in 1970.)

Perhaps he was thinking of SC state Sen. McConnell, who, as chairman of the H.L. Hunley Commission (a state agency) facilitated the donation the ship to the state in 1995. (Basically this amounted to the Sea Research Society, an educational non-profit, which had discovered the location ceding any legal claim on the wreck to the state.)

The raising of the Hunley (which by then was the legal property of the state of SC) was done by combined efforts of the USN, the US Parks Service, and SC Institute for Archeology and Anthropology. The Hunley is now in the custody of the Warren Lasch Conservation Center, part of Clemson University (which is a state university).

Fantastic build Craig. And a very nice finish, would be interested to know how you achieved it.

Been interested in trying this one myself, as something very different to my usual build subjects. Have been put off by the etch parts, especially that circular shroud around the prop. It would very quickly become a misshapen lump in my hands.
I remember watching the documentary on the raising of the wreck a few years back.

That circular shroud shouldn’t be too much of a problem…simply anneal it and wrap it around a suitable diameter rod. Immerse it in cold water to cool it and retain the shape. I can see where knocking off the prop blades would be a #*%@ing nuisance!

I can just about manage a right angle with etch! Annealing and forming a cylinder? That’s a recipe for disaster in my hands.
Tried gun cooling jackets and all were failures. Most formed misshapen squares that sprang back open. The problem seemed to be not heated enough. Tried heating one for longer and well, let’s just say that what I was left with would’ve made for an interesting piece of modern sculpture. I just can’t get the hang of etch.

Happy to send my 3D print files. Can’t guarantee the accuracy of the propeller though. couldn’t find a decent reference.

Thanks for the offer. Not sure I know of anyone who has a printer but I’ll keep it in mind if I ever do get this kit. Not actually found one out in the wild over here yet.
What diameter is the prop shroud? Can always scrounge a suitable tube from some sort of packaging.

22mm diameter and about .5mm thick.

Thanks, I’ll keep my eyes open.

Tried to take a few extra photos. Darker background this time, but way over exposed. Taking pictures of dark objects is difficult. who’d a thunk? Still, gives a better appreciation of the speckled paint texture, if not the depth of it.

Next up the torpedo spar.

Is that daylight? And excuse the personal question but how are you going to mount it?

All the pics are daylight, but none of them are very good. The reality is in the middle somewhere.

For mounting I’m thinking a couple of pedestals and nice long bit of routed something that looks like walnut.