Welcome back! I’m truly sorry for your loss. I’ll be optimistic in the hopes that you are doing better, and may this year be a good one. You’re bird looks pretty darned cool, and you’ve made some great headway on it. Do keep with it!

I too did a little walk away from the hobby, mostly due to distractions with all that’s going on in the world, and the roll out of the new forum, which I think I unfairly blamed everything on! As I dabble on it, it’s not that bad, and in some respects better, though I do miss the little things like the campaign ribbons. I’m sure that we’ll figure this out in time.

The wife says I babble too much, and don’t tell her, but she’s most likely right! I began Trumpeter’s 1/48 Vigilante for the “Boys on the Postage Stamps” campaign. I knew going in that this build would be a lulu, and it was. If you want a Vigilante in this scale it’s the only game in town, and you really need to want it! I did, and I got to expand my modeling skills even more. At times I asked myself why, and went back to the “Oh yeah, I really want this on the shelf!”. There is no nice way to say it, but this is a very difficult kit, that leaves (at least me) asking when will this end. I slugged through, picked up some nice ejection seats and tossed them in, a set of decals that looked great in the package, but did their best to shatter at the wrong look. This kit now holds “Worst ever” in my book, and unless someone pays me a great amount of money, I won’t do it again. Ha ha ha, still I wanted it, and it looks the part, but what a journey. 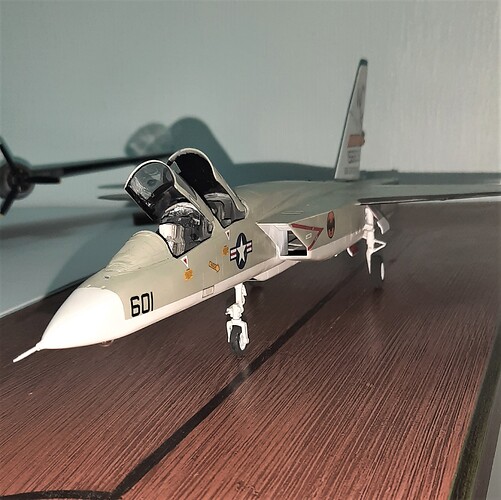 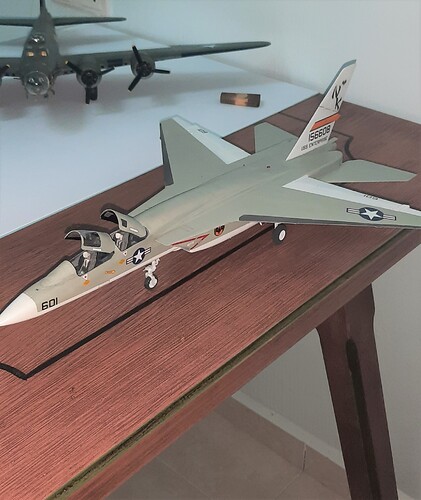 And after uploading these pics, I realize that the mask on the windscreen remains, it just doesn’t end!! I’ll fix it, and move on. I learned a lot on this build, and I feel good about getting it done.

So, remember during these trying times, we can get a project done and take a little time-out. Dust off the Queens!!

Great to have you back. Sorry for your loss. Hope 2021 will be better for all of us.

Good luck with the Spitfire

Since I dropped the ball on my Battle of Britian Spitfire

build I will bring it over to this campaign to finish up. 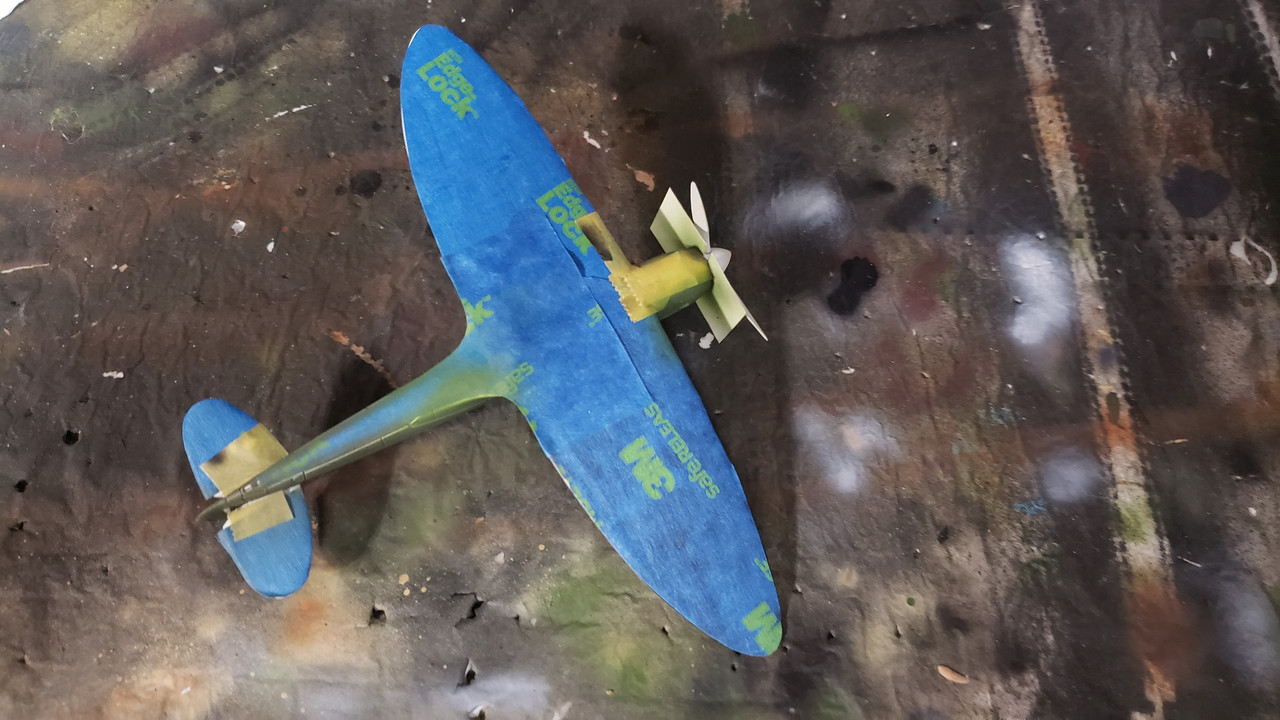 Here is my entry… I try to make this kit for a campaign… and its not finished!!! 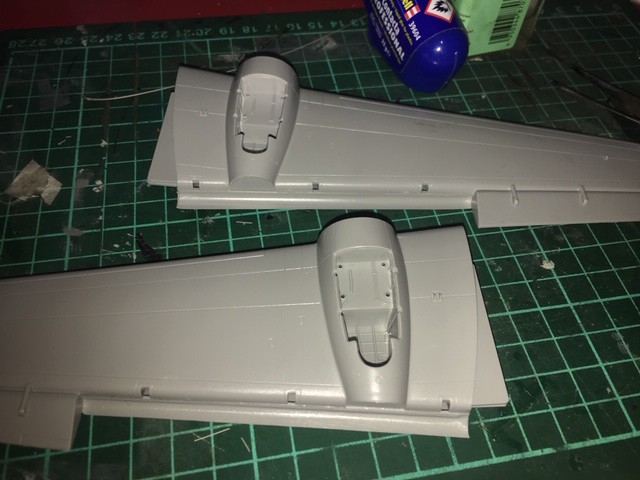 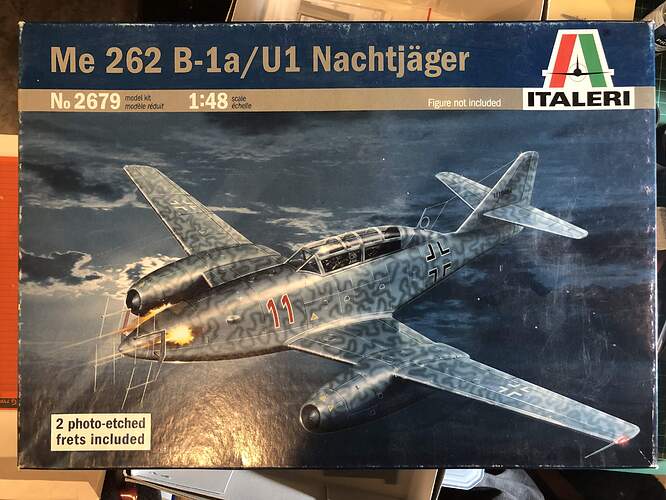 We basically finished 2020 in primer. 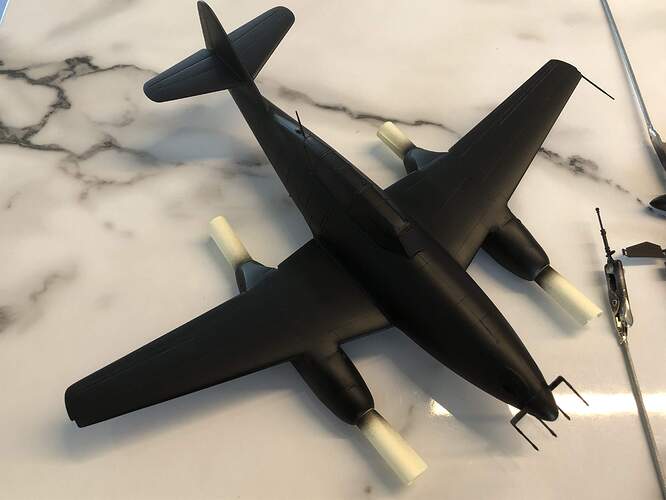 Here or in the open forum entries, I’ll post in both.

Hi All, This “Halibag” has been laying around since 2015, when I got back into the hobby in a serious way. Initially, building scale models was a release/reprieve from the endless torrent of ideas for new sci-fi and adventure/comedy novels. It helped me relax, forget about writing, focus and ultimately allowed ideas to brew into something far more palatable. Funnily enough the roles are reversed after taking on Brian D. O’Neill’s 1/48 B-17. Now my writing literally re-energizes the modeling bat… 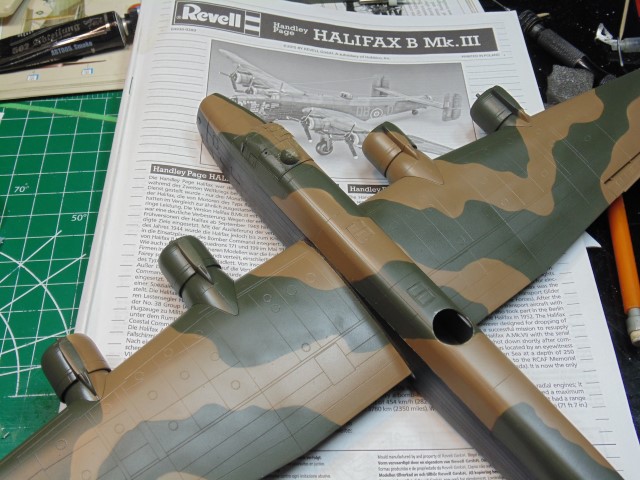 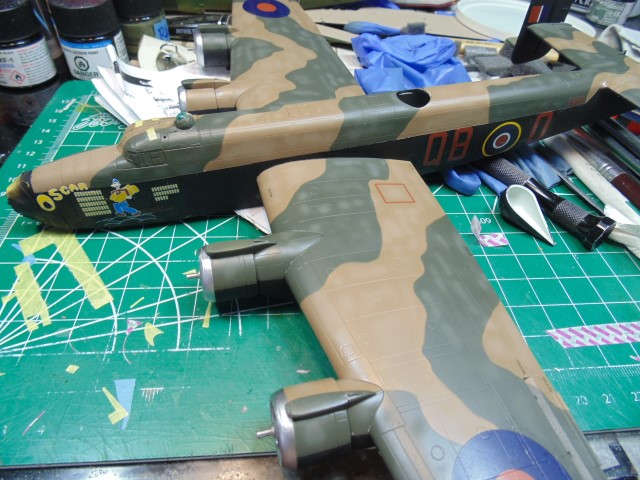 Trying to blast thru the decals tonight and then weather. 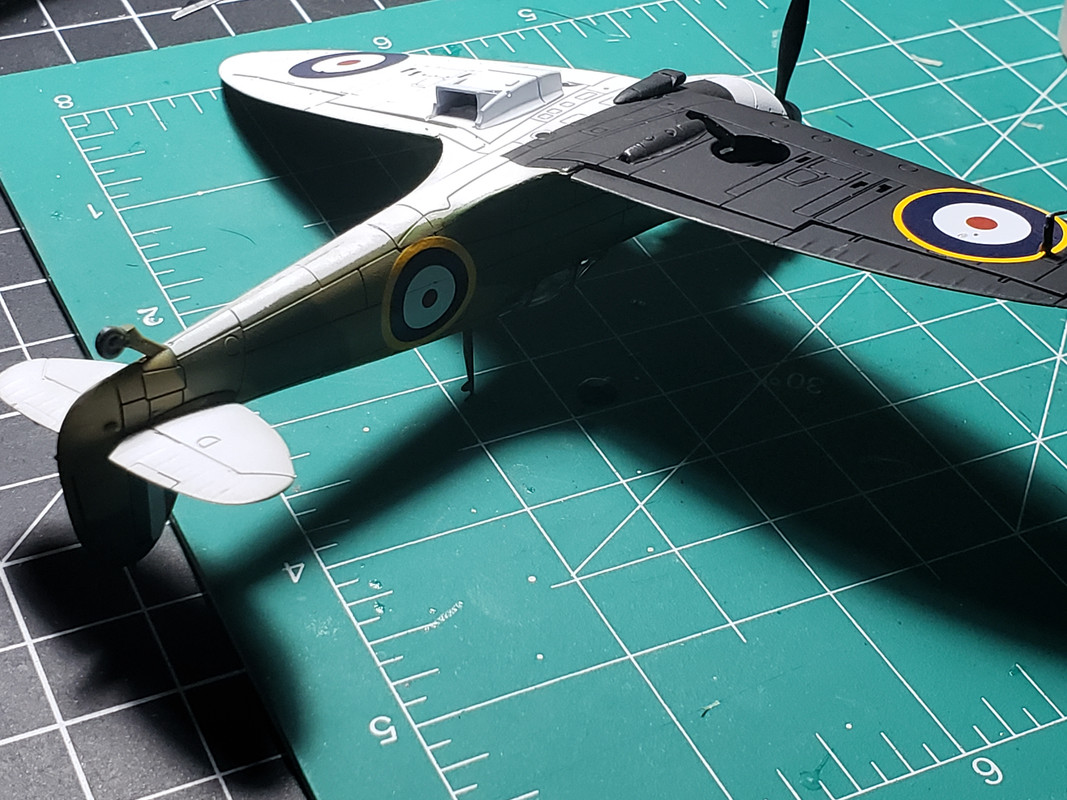 Great builds for this campaign, guys.

Damian, good to see you in this campaign. Keep rolling that storm bird in the hangar queen campaigns - eventually it will get finished

Well I am going to end this build. This was supposed to be a model just to test doing panel washes. So it came out better than I though it would. but I had the decals silver on me and I lost the gear for wheels up flight. So it sits on landing gear until I get that figured out. Eventually I will try doing some chipping on it. Quite a few flaws. But I can carry some learned knowledge forward for the B 17 build. 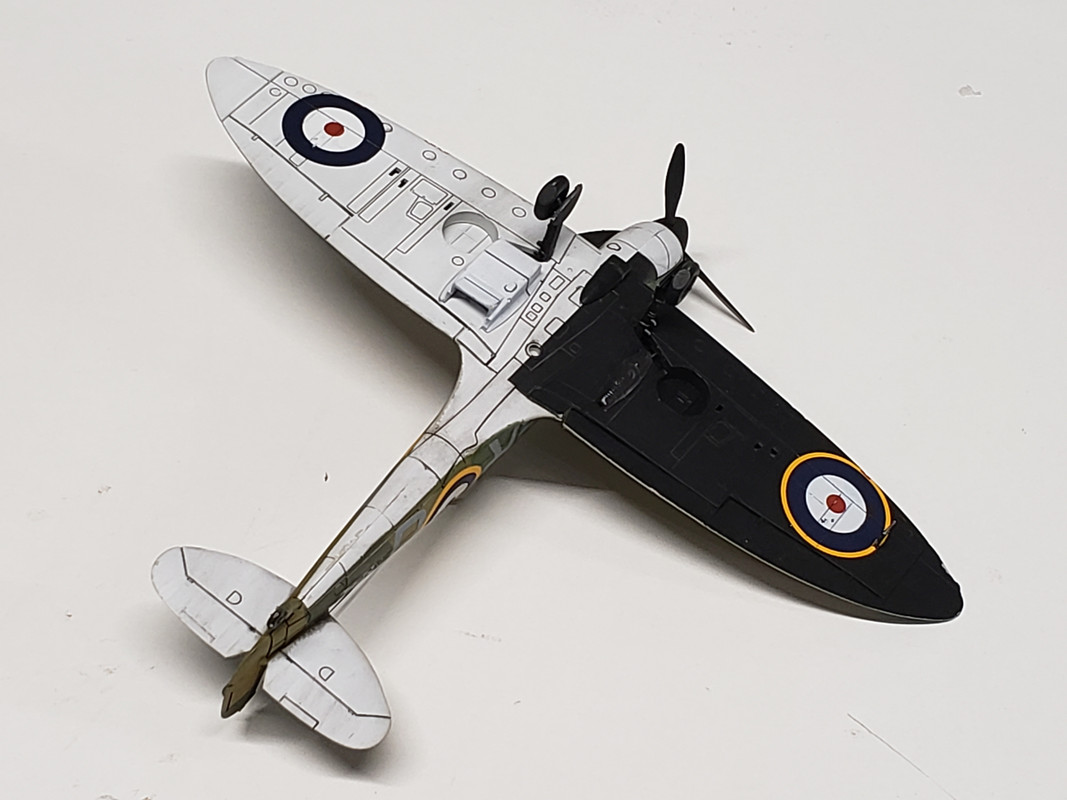 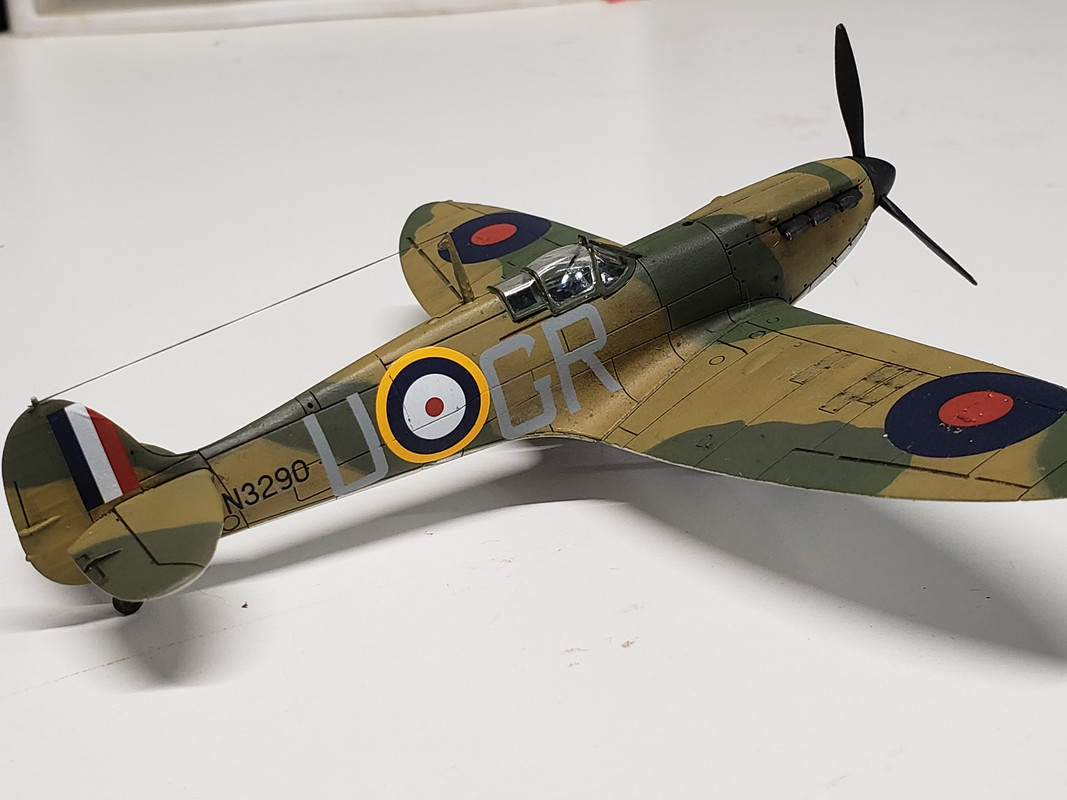 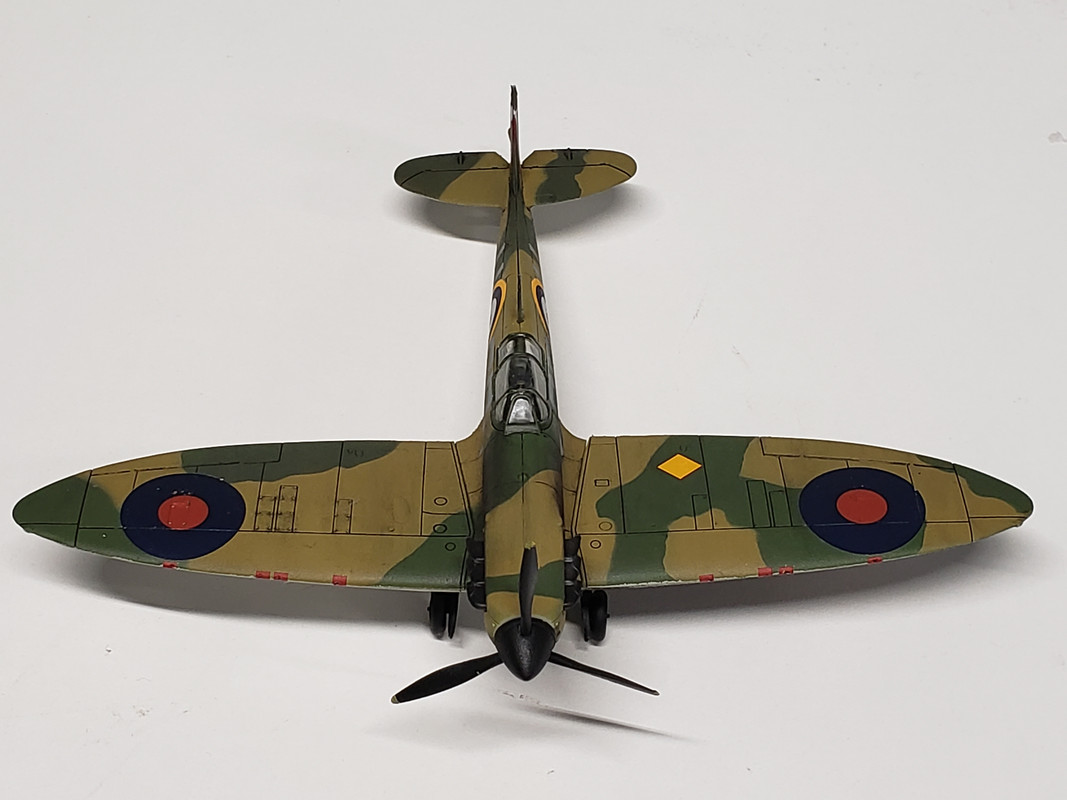 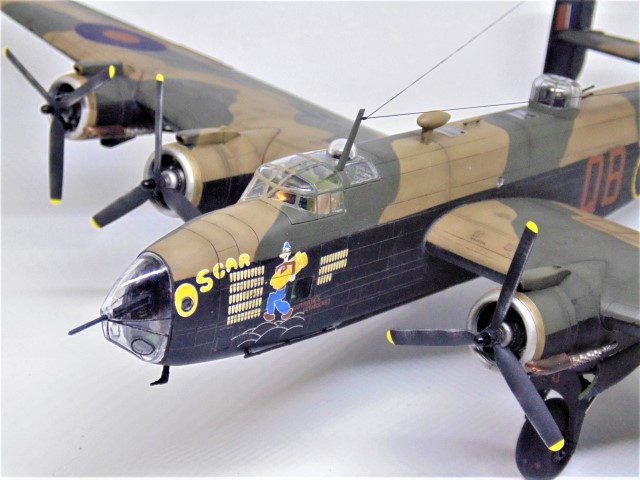 Full blog is up as well. Thanks Everyone.

Thanks, she should sell quick for the charity people. Only trouble is… I have more shelf queens to do Bahahahahaha.

I found some Hurricanes from Arma Hobby (1/72nd scale) who were lying hidden in some … shoe box (probably left them there to dry for about a year or so).
So I’d like to join with these two, if you don’t mind.

Current state is as on following picture:
Planes are assembled & both are primed and preshaded in “I don’t know what I’m doing” style. There are only few parts left unglued (undercarriage, exhausts and antenna mast). 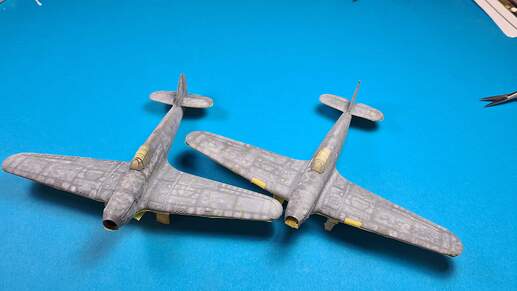 I built an Arma Hobby 1/72 Hurricane Mk I last year, it was a nice kit. Looks like you’re doing good with these two.

@md72 . Thanks Mark, did you have any issues with this kit? Just asking, because overall this is indeed a good quality and quite well manufactured kit, but I had some issues fitting front canopy and instrument panel (looked like they both were too wide for their “slots”).

Painting continues - I got them covered in camo, incl some bonus areas painted (black pads on wings and red paint at gun mounts). I’m going to build both in 303rd Squadron markings. One with red gun pods will be RF-R (R4175) flown by Sgt pilot Josek Frantisek. Other one will be RF-F (V6684) flown by Sqdn Leader Witold Urbanowicz.

Here’s the current state of the build. 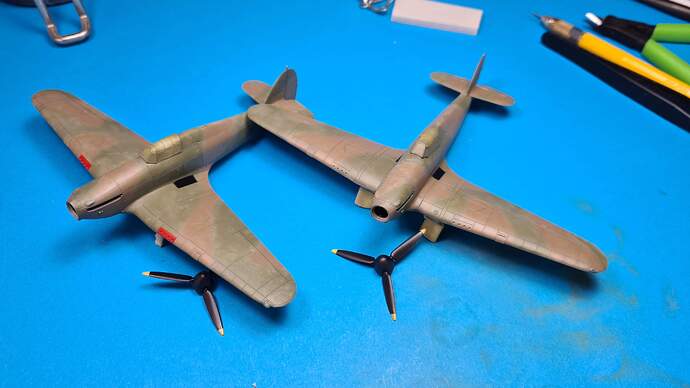 Most of the issues were self induced. I recall the cockpit and all the bracing was a bit fiddly and I didn’t get it quite right, don’t recall and IP issues, but I did manage to lose the control stick.

Ok, managed to apply decals on both Hurricanes. I must admin - these Techmod transfers are love and hate story for me

- from one side they’re very sharp in quality, well designed, thin, but being thin make them very vulnerable to my clumsy skills - they break, in result I had to buy another set of aftermarket decals from Techmod for RF-F plane and they were much better than kit decals.

Another interesting fact - I’m using hataka orange paints. To secure decals I used hataka orange gloss varnish and also X-22 from Tamiya, with 2 days of drying time between hataka & Tamiya and later 2 days before applying decals. I used Microsol SET/SOL & GSI Mark Softer Neo to settle decals. I found that in some places, despite quite good varnish layer, decal solutions penetrated and melted paint. Nothing that I couldn’t recover, but that was unexpected.

Here’s the current condition of both planes: 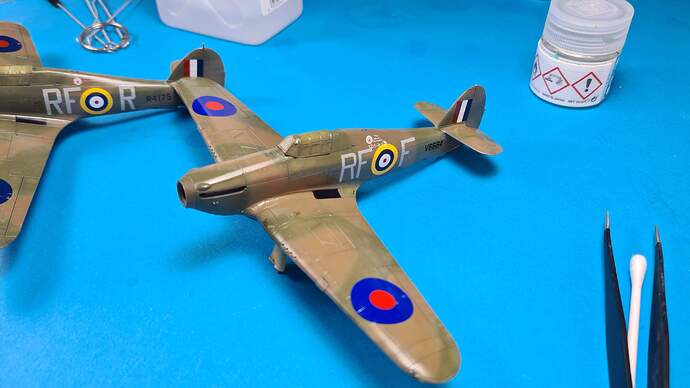 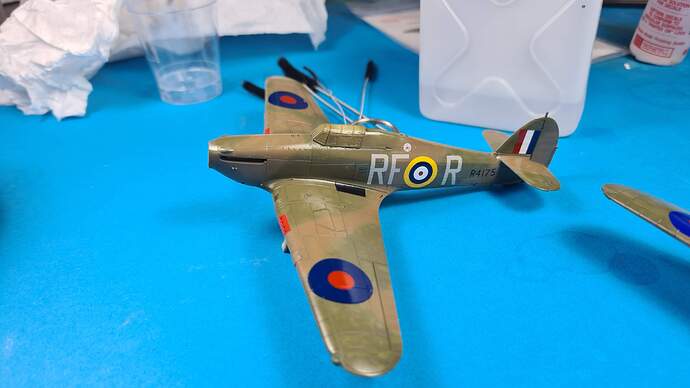 Well, I’ve kind of gotten to a toss up, an Oscar Ki-43 I started about a year and half ago, while watching over my sister-in-laws coffin during her viewing. 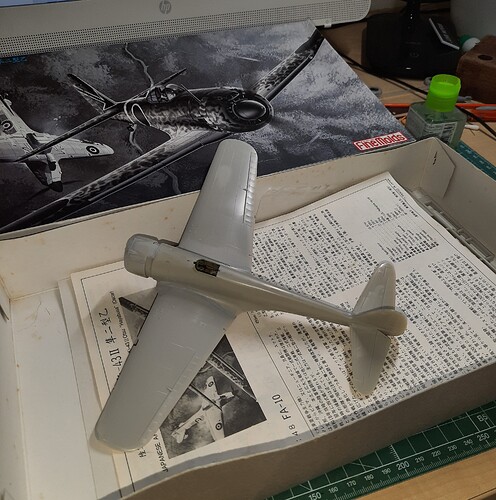 And/or the Fujimi F-15 I started for the Terrible Teens campaign.

I’m sure I’ll figure it out! Keep up the great work! 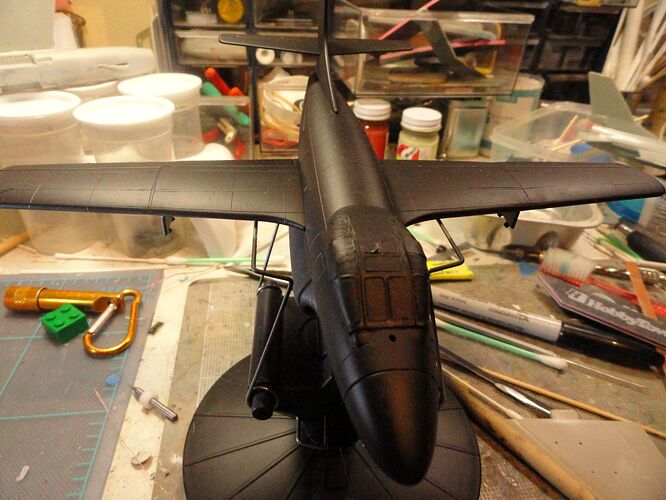 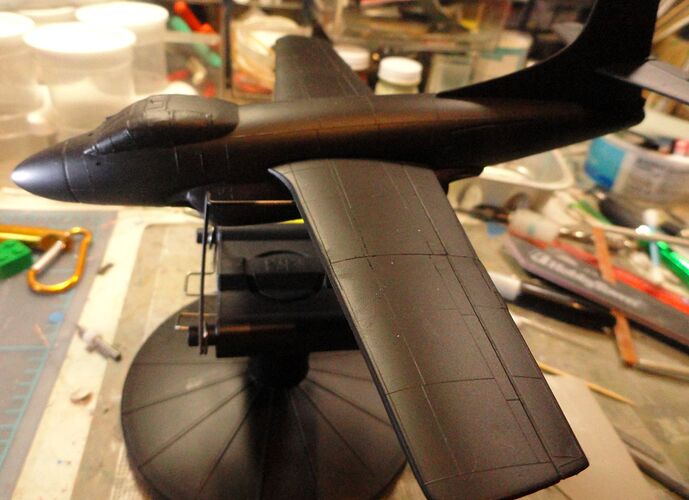 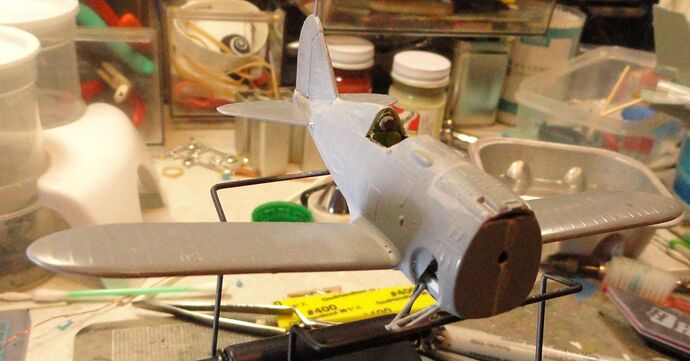 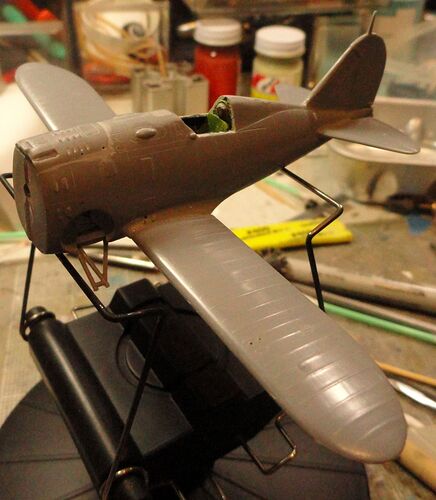 F3F-2 in progress side small1321×1512 220 KB
Plenty of assembly, painting and rigging to go.
Hopefully one of them will be my first completed Hanger Queen this year.