Friends, hobbyists, crew chiefs, lend me your screen. I have come to present ‘Frank,’ not to shelve him.

My 1/48 Tamiya Hayate is complete. Built OOB except for the sentai insignia, representing a Ki-84, 3rd chutai, unit unknown, Indo-China, 1944. Finished in the early “depot” scheme of dark green over bare metal. While relatively new, this Ki-84 has suffered damage requiring a replacement propeller and canopy after a taxiing accident with a Ki-49. Apparently there has also been some landing gear damage as it has a replacement main gear door. 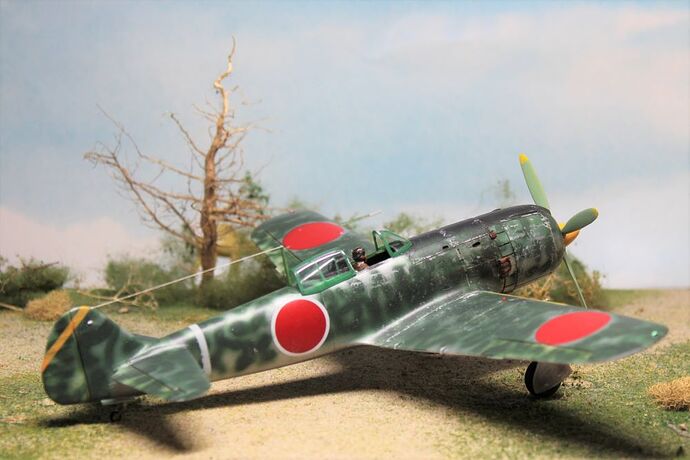 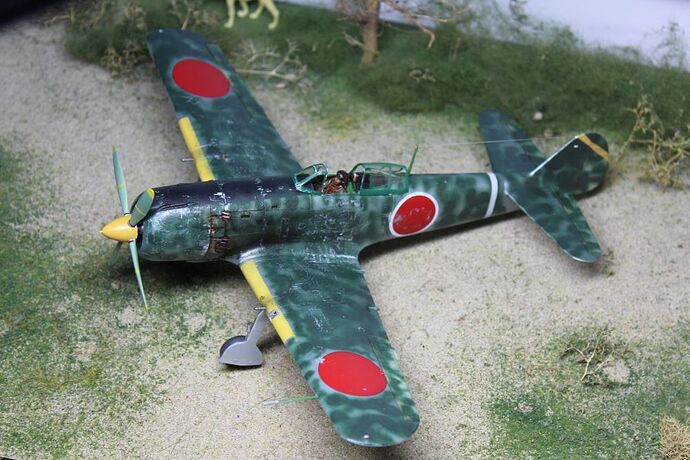 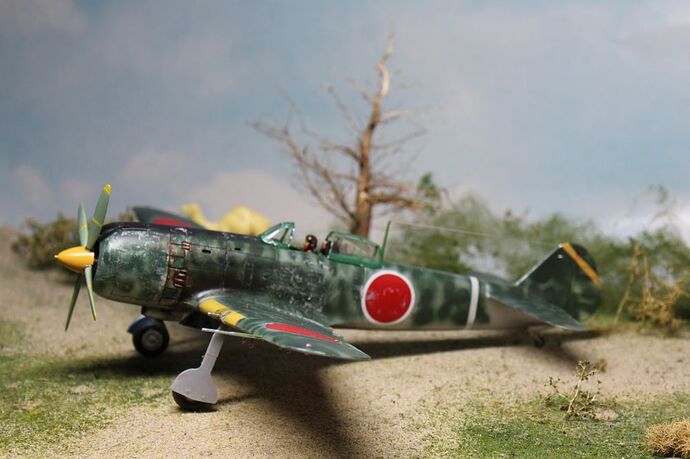 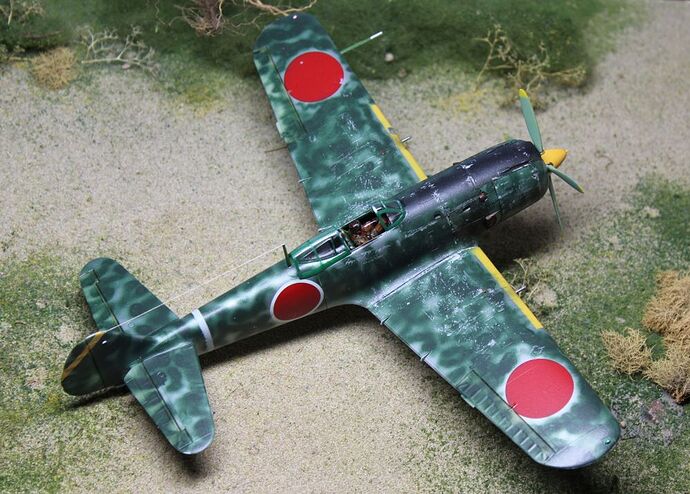 Apparently, Ki-84s had at least four antenna configurations. I chose the simplest. I also lost one of the drop tanks so ‘Frank’ is awaiting preflight servicing.

Not my best model but considering how few I’ve completed the past decade, I am happy with it.

I have another hanger queen to work on after I complete a few other projects.

Just found this film of the (then) airworthy Ki-84 flying at the Japan International Aerospace Show: 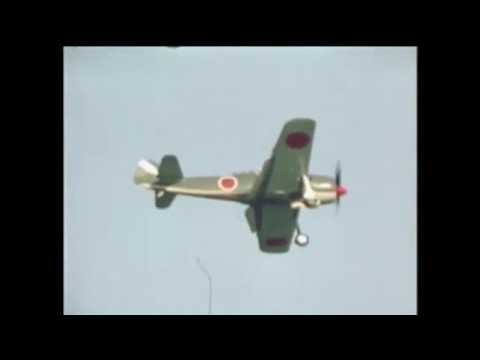 Lol. . I’m picturing you battering lead weights into the nose with a hammer!

Kinda’ hated gussying his shiny skin up with camouflage ‘acne.’ 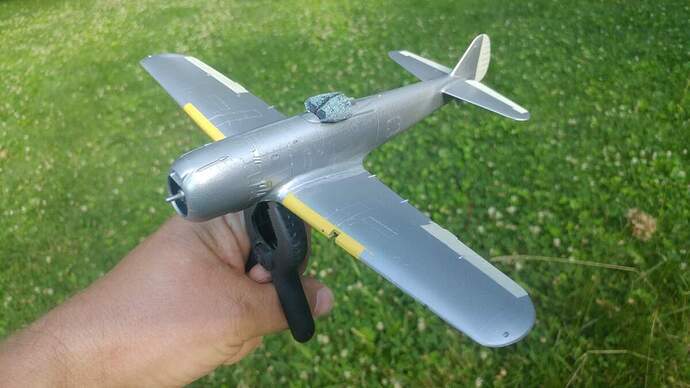 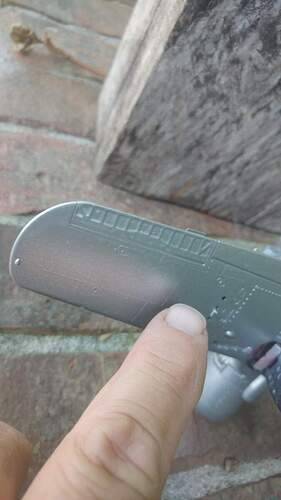 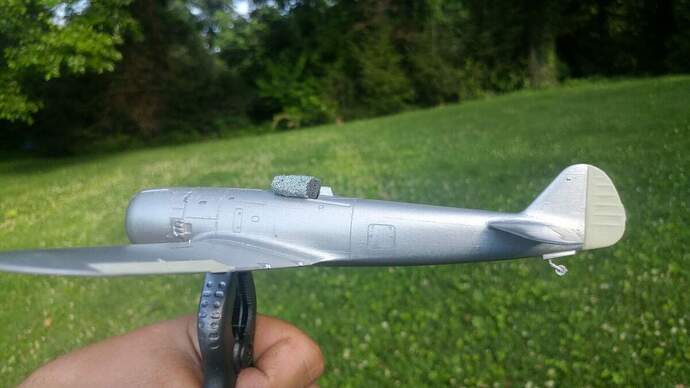 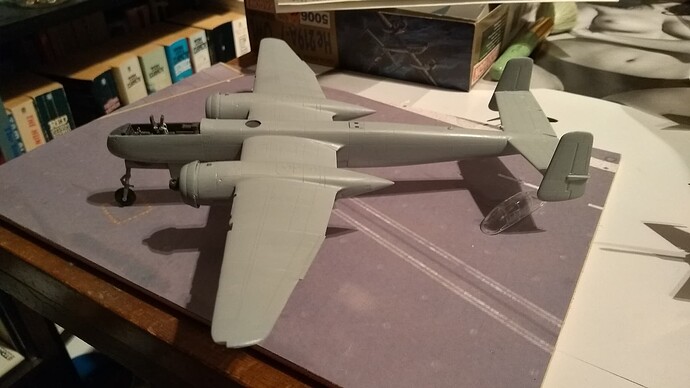 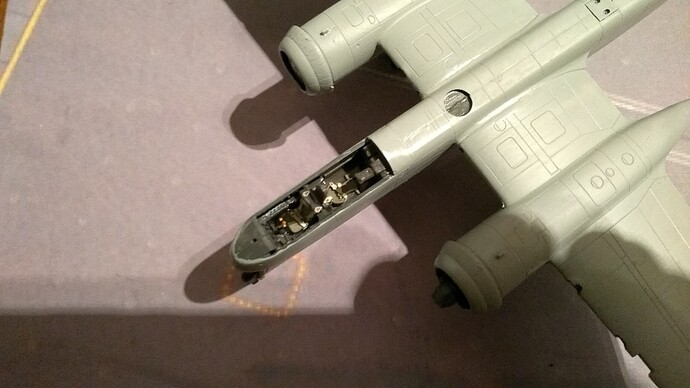 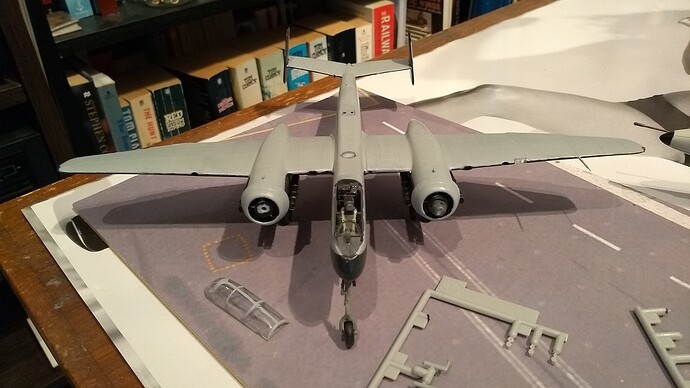 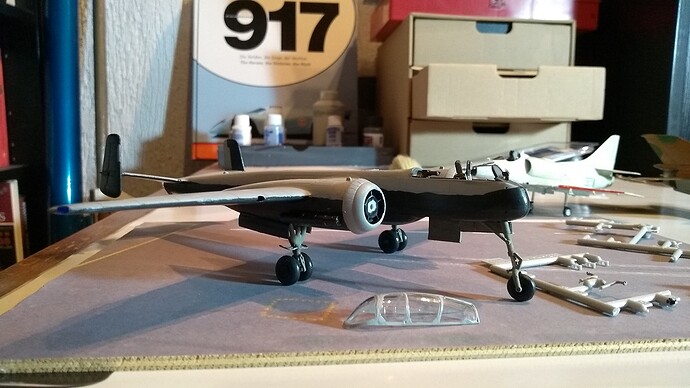 …and out of the paintshop now…sort of prototype mode without radar antennas and decals yet. 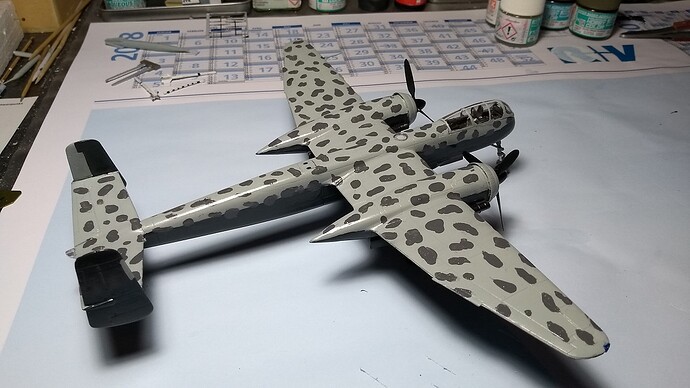 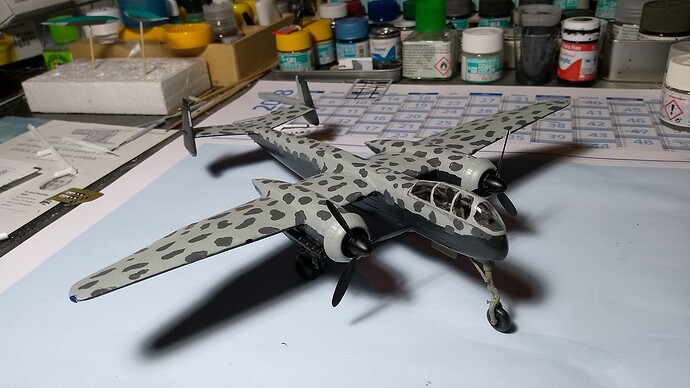 Hi mates,
the Uhu glides nearer to the finish line and gets hungry for Lancasters… 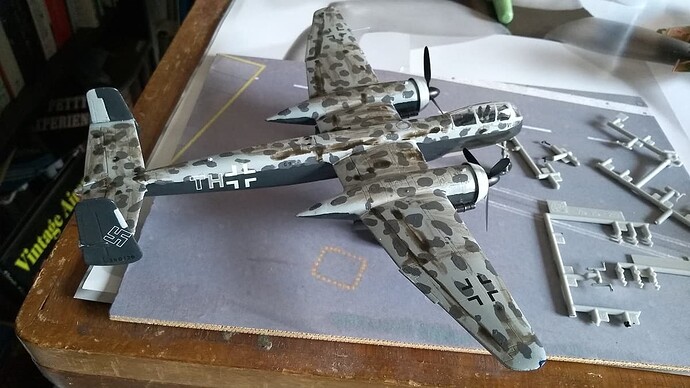 …and after cleaning up and adding decals and some of the fiddly small parts. 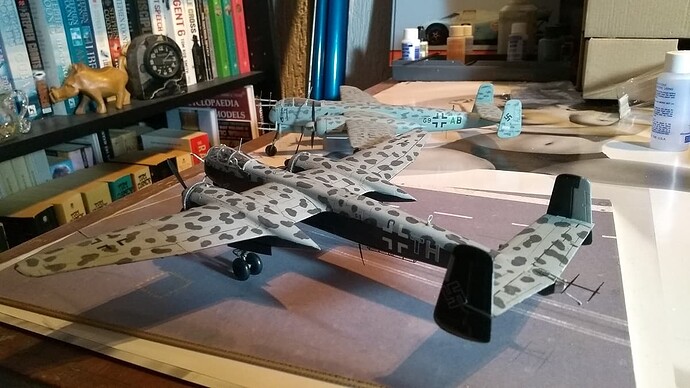 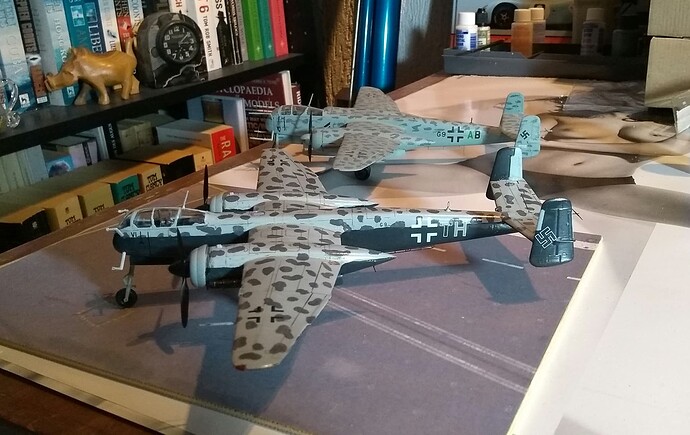 Now only the Lichtenstein radar antennas are missing. In the background there is my old Revell build from the 80s, which will be written off now. But its scratch built access ladder will go to the new model.
Have fun! 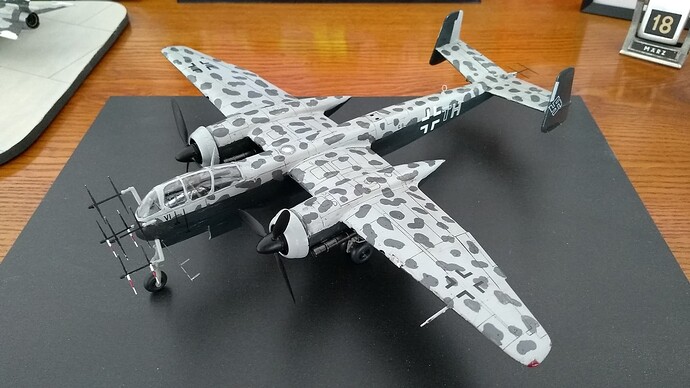 …and here some better arranged photos. 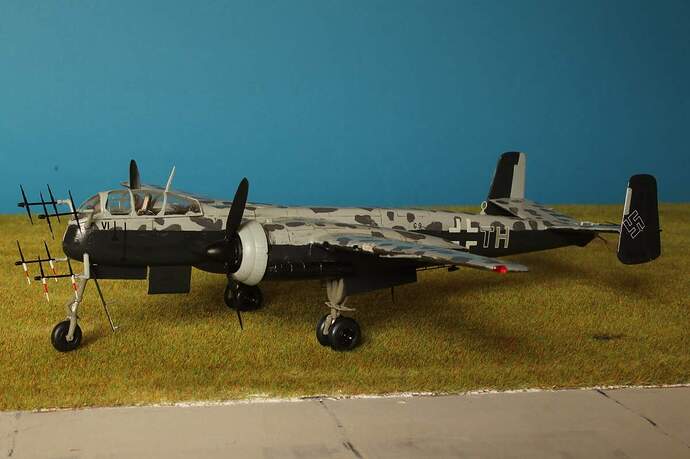 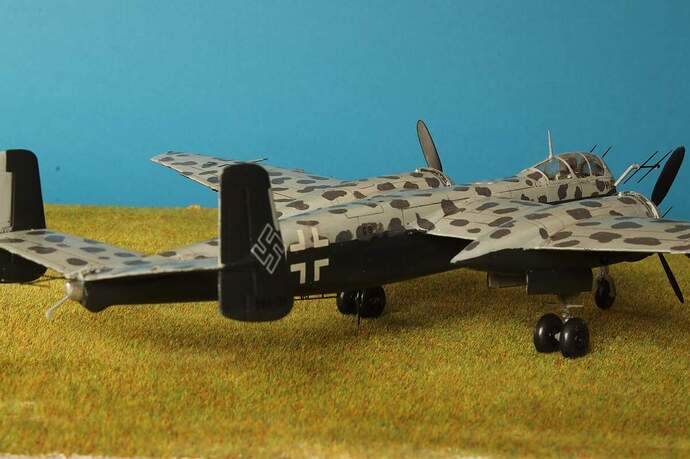 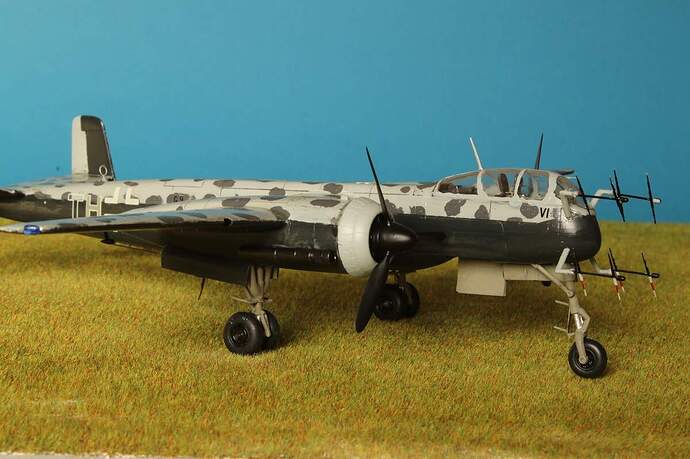 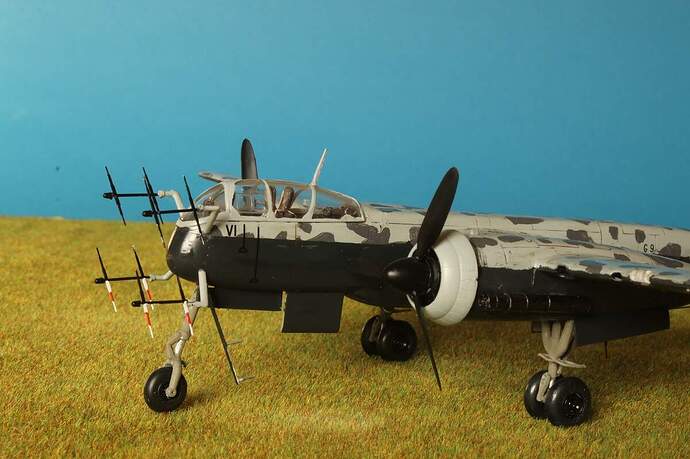 I gave my Horten some Black base paint - next some Dark green for the splinter camouflage. 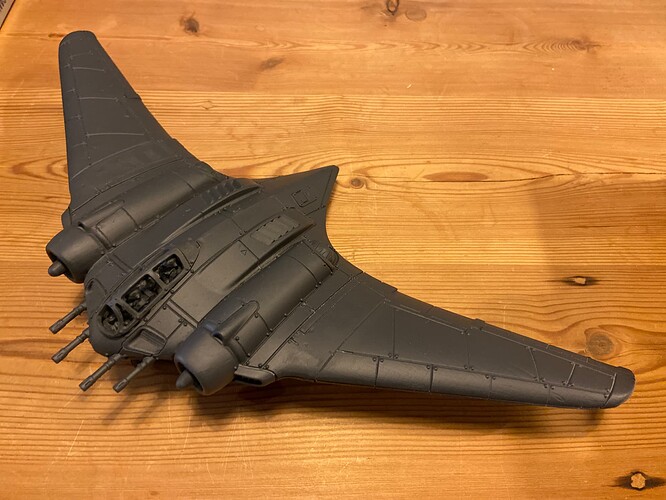 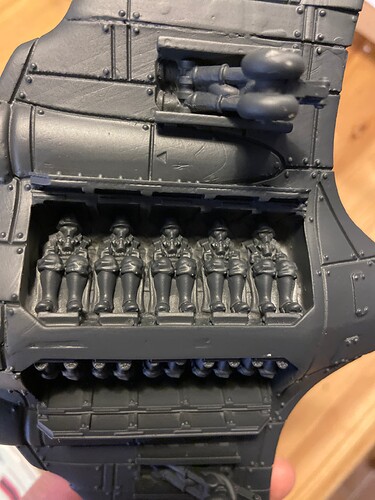 OMG, don’t let the airline folks see this. Might be the next short haul sensation.

Current state is kinda 60-70% completion on both being assembled and primed: 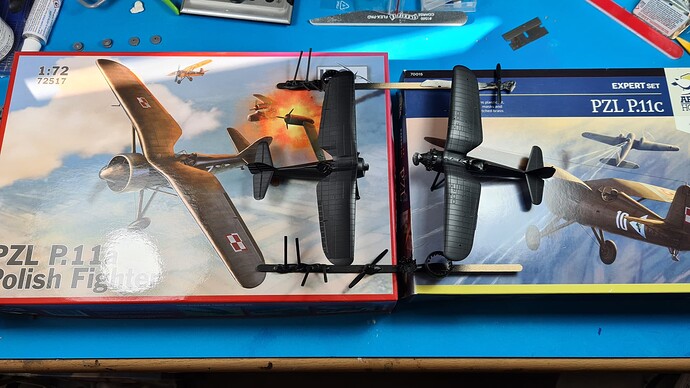 (Img may falsely show allegation model to box tho, I don’t know which one is Arma and which is IBG…

We don’t mind at all, welcome aboard! It’ll be great to see them finished, though as my eyes get a little more experience, they’d have to look hard to see them. They look good so far! 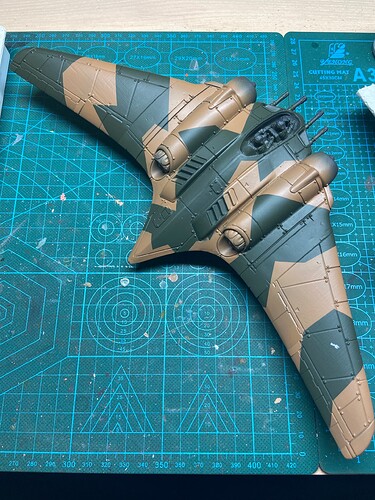 Ok guys, got some progress on my 2 PZLs . Painted them with Hataka Orange series dedicated colours and put decals on.

Arma Hobby model on the left, IBG on the right. 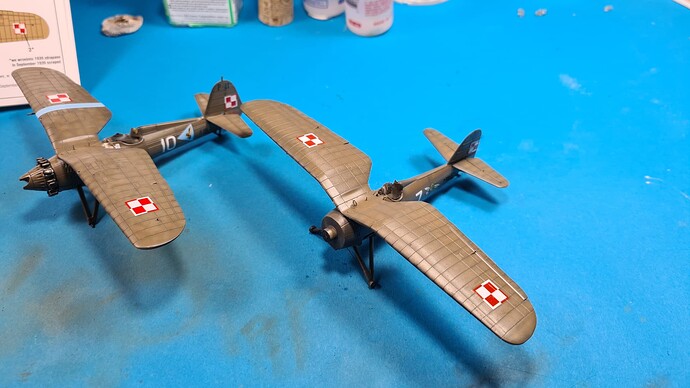 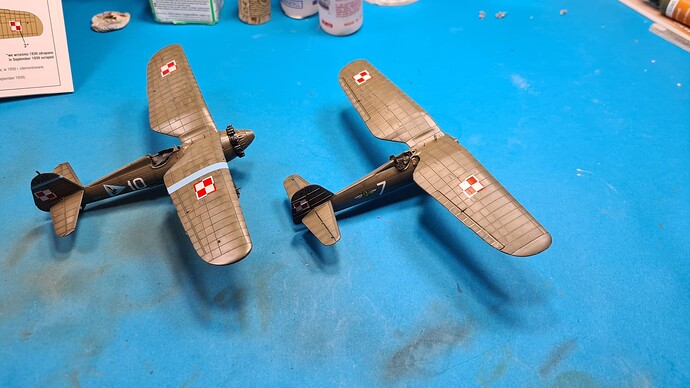 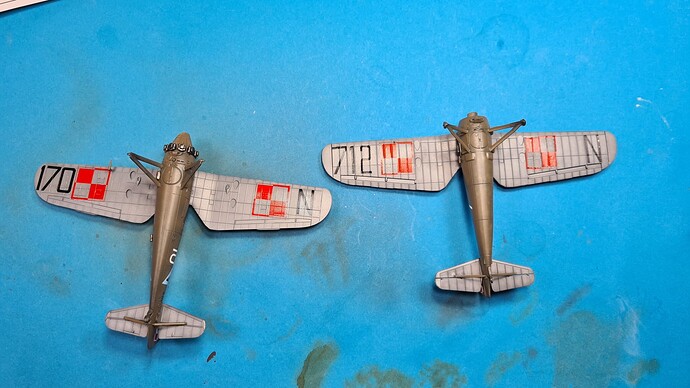 Arma has decals printed by Cartograph while I think IBG ones are from Techmod. IBG’s are more delicate and have a tendency to warp. It can be seen on bottom left wing and Polish checker marking (one next to N ) where wings profile was quite comples shape and decal didn’t stretch well, so you need to be careful when applying softer solutions or … it’s too late

Next is glossy varnish to protect decals and weathering

Great progress, Radek. Looks like the colors are spot on.

The orange series is the water based paint? I have considered buying the danish camo set, but really do not want another set of cleaners, thinners etc in addition to Tamiya, Vallejo, Ak interactive and mig productions.

Thanks for the tip on the IBG decals. I will order their “Ghost of Kiev” when released, so nice to hear some tips on their decals before starting on their huge pixel camo decals.

Hey Jesper, orange series are celulose based lacquers and need dedicated thinner (at least I use a dedicated one). Their smell is not offensive, but some resipratory protection should be used. I don’t know how they mix with other thinners, didn’t try that. However they are really, really great in application, don’t clog airbrush and so on. Fun part - I have also orange series gloss varnish and when I opened it after ~1yr in bottle it smells like … mead

About “Ghost of Kiev” by IBG - just in case you don’t know - sprues will be from 2015 Trumpeter’s kit. And in case of Techmod’s masks I made some tests with some spares left I had and it seems, that this “warping” problem was actually… well… guess what… my fault

. Seems like I moved them with cotton bud when rolling over to remove uneccessary liquid and fit them into recesses.

I have something that has been sitting on my shelf since 2005.

It is 99% finished. It just needs a pilot and a canopy, but I never got around to finishing it. Does it qualify?