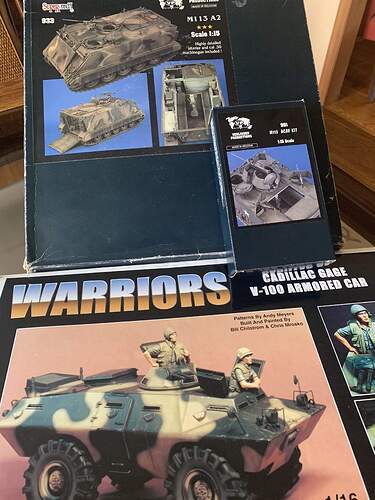 So I’ve got a couple of my large scale dream kits, Verlinden’s M113 w/ACAV kit and the Warriors V100 and I’m having a hard time trying to decide how to build them. In 1/35 the decision would be easy, just buy multiple kits and build multiple versions.

Since the Verlinden kit is an M113A2, I’d started building it last summer and outfitting it with some of Verlinden’s Gulf War figures and related accessories and stowage. The intent was to do a 1980s/90s A2.

Primarily being a Vietnam era builder, it kinda bothered me having the ACAV kit go unused but considering the lack of in scale Vietnam accessories, I made peace with my decision.

Enter the V100. Two seconds after opening the box I’m thinking I’ll use the T50 turret on the M113 and build it as an Aussie M113 used in Vietnam. The hull and sponson armor, air filter box and roof top ammo racks would be easy to scratch build. Of course that would mean having to cast a new turret and possibly the dozens of ammo boxes. 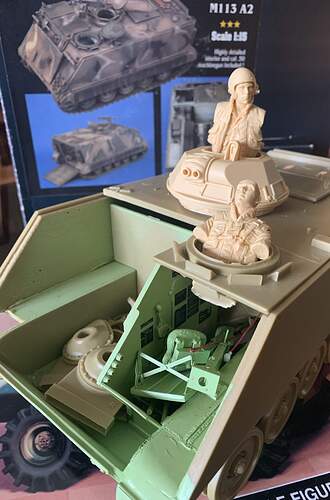 Of course this all reignites my original plan to build a Vietnam era M113 ACAV.

At least I’m 99% sure I’m going to build the V100 with a .50 cal mounted on the turret top with a couple pintle mounted M60s a la “Catch 22” or similarly outfitted vehicles…so no trying to convince me to build an XM706E2 or one of the rare ones with the M113 ACAV shields and XM182 grenade luncher.

Anyway, just wanted to bounce this around and see what all of you thought.