Help, my T-28 DS tracks have liquified in the package

I just opened my Dragon T-28 Super Heavy kit and found the DS tracks have liquefied in their plastic bags. The tracks themselves are very brittle and you can squish the liquid around in there. It is also coming through the plastic bag itself. Luckily, it has not gotten onto anything else in the kit, just my hands. 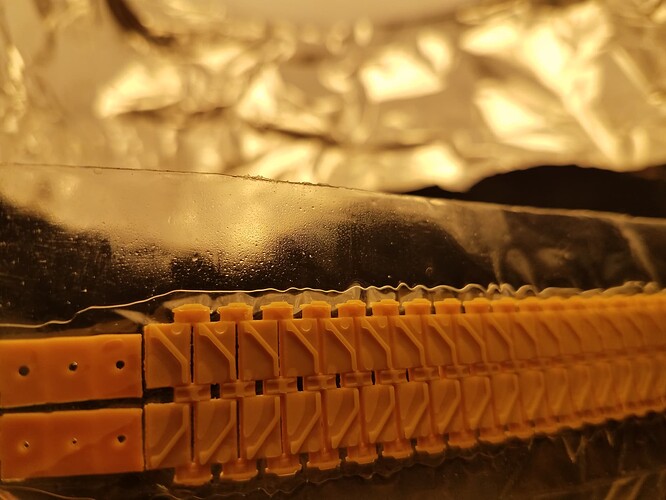 So, I am looking for replacements and can’t seem to find any for this kit or any info as to exactly what type the actual tracks were. Can anyone tell me what replacement tracks to buy? Thanks much. Well, they sure look the part but I wonder if they are the correct width and spacing to fit the sprockets?. I read somewhere that the real tracks were not the Sherman type (too wide) and that Dragon messed up by making theirs too wide as well. Maybe they did use the Sherman ones after all. Anyway, I bought the kit in 2012 for $60 and now it looks like I’ll have to spend another $60 for 3 sets of tracks (two sets won’t be enough links for four runs). Bummer.

The right tracks are T80E1 tracks that were used on Pershing and early Patton tanks. They are wider than the earlier T80 ones used on Shermans.

AFV Club and a few others also make them. 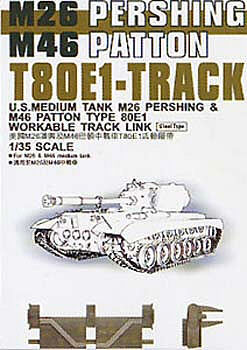 Great info HeavyArty, thanks a lot. I looked at reviews and videos of the AFV and Bronco sets and they are not very encouraging. The Friuls are probably the best bet as far as assembly but are about $28 a set (x3 sets) plus shipping from Friul so $100 for tracks for a $60 kit. I may just close this one up and donate it to the club raffle less-tracks. Anyway, thanks very much for your help.

Bronco’s set looks daunting, but they are worth the effort. Just glue the centre guides to the skeletal frames and let them set first. Then use double sided tape to hold down the track pad inner faces sections, slip the frame in place, then gluing only the centre of the outside pad section, fit that over the two frames onto the inner pad. You will get into a rhythm both cleaning the parts and during assembly and it will go faster than you expect.

These are Bronco Sherman tracks that I put together. They are pretty much the same process. The inner track face is stuck to the double sided tape holding it all in place so I can add the frames then the outer pad. 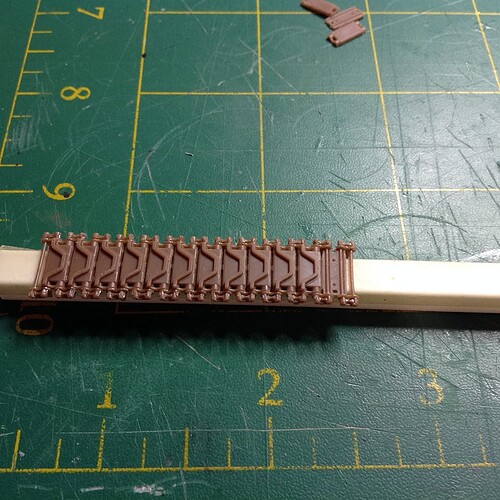 That doesn’t sound too bad, petbat. The reviews I found indicated that both AFV and Bronco sets were very fiddly, prone to breakage when cutting from the sprue, and in the end, not really all that moveable without coming apart. I don’t mind the fiddly part, been building models over 60 years, but the other two issues give me pause. Since I plan to build the tank in traveling mode with the outer tracks and sponsons being towed, I can’t hide anything under skirts. I appreciate your input. I may build this one yet.

Coming apart is caused by the ‘movable’ feature, things get too fragile when attempting to be a hinge
Not really that movable is due to the movability feature being too fiddly, too little glue and they come apart, too much glue and they are not movable.

Unless you are planning on running the tank across your desk making brrmmm-BRRMMM-brrmmm sounds the movable feature is mostly a gimmick. 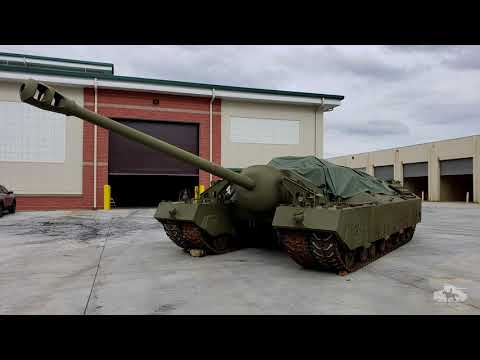 Forget about the ‘movable’ and assemble solid sections.
The flat section in contact with the “ground” is easy, from the point where the foremost road wheel touches the “ground” to the same point for the rearmost. This reduces the fiddlyness for 2/5:ths of the number of links.
The top run, from the idler to one or two teeth onto the sprocket. There wasn’t much track sag so this is a nearly straight section (see video clip for suitable sag). Make short solid runs and shape them over the return rollers before the glue sets too much. Join the short sections into a complete top run. This takes care of another 2/5:ths of the links.
Now you can start the fiddly work with the really curved bits and the sections going up to the sprockets and idlers, they only need to stay movable until you have given them the final shape.

It is usually possible to assemble one very deep U, from one or two teeths on the sprocket all the way around the idler and back to one or two teeth onto the sprocket. The remaining short curved section needs to be movable, unless you cheat and cut off one of the pins in the hinge part.

You read my mind Robin ! I thought long and hard about the build last night as I want to enter it in a show contest coming up in late March. The only way I could see to do it would be to make the tracks link & length as you suggest. Since they will all be visible in my presentation it should not be that hard to do it and install them in pieces rather than whole.

This is a unique tank and I want to show it in an unconventional configuration. You have convinced me to go ahead, my friend. Now, will it be the AFV or Bronco tracks? That is the question.

Many years ago I tortured myself through a set of AFV Club tracks for M48/M88.
the end connectors cracked and I had lots of problems to get them to stick together.
Supposed to be movable but the end connectors kept falling off (i.e. the ones that didn’t crack)
I finally managed to glue them solid but they used something else than styrene for either the
end connectors or the link itself (I think it was the connectors …).
Didn’t want to take solvent-glue, used CA for some. I think the solvent opened up dormant cracks but without glue the connectors just fell off …

I would go for the Bronco tracks, if you can find three sets …

…the movable feature is mostly a gimmick.

Couldn’t agree more. I always glue “workable” indi-link tracks solid and do just as Rob suggests by making them into length and link tracks in sections. This method should work perfectly for you.

Also, be sure to show us some pics once you start building it. It should be a great representation of an interesting vehicle that you don’t see models of too often.

The other thing with AFV Club tracks is that I found that they react badly to harsh washes,they become stiff and brittle,stick to something mild with your weathering.

Mine were the M1 Abrams tracks

Strange. I used AFV Club track for my Desert Storm M60A1 and had no problems. I normally use Friule track. Maybe I was just lucky.

I used AFV Club track for my Desert Storm M60A1 and had no problems.

I’ve got that T28 kit and now I’m afraid to look in the box! I think I’ll take the “Schrodinger’s cat” approach.

Were they ever used as range targets? You did say you wanted to present it in an unconventional manner. Range targets are fun to model. You can pretty much let your imagination rule, and use as much or as little of the track that you want. It’s a great solution if money starts to become an issue.

Any Dragon kit with tracks and/or wheels made out of DS are potential horror shows.
I have three Sd.Kfz. 7’s by Dragon, one has front wheels in mint condition, the other two have wheels that look like shrivelled up donuts.

I went through all of my kits after the last go round of threads on this and removed all of my DS track.
I replaced them with other track/wheels and the ones in mint shape I gave to other online members who wanted them instead if doing indy link track.
If you fish and use plastic worms, the same thing will happen with the worms. They will also melt into any plastic trays they are sitting in. I found that ziplock and sandwich bags seem impervious to the melt.

I’ve got that T28 kit and now I’m afraid to look in the box! I think I’ll take the “Schrodinger’s cat” approach.

That’s what I did. The box was factory shrink wrapped and kept in my cool, dark stash for almost 10 years. What could go wrong, Right? A word of caution though - the liquid (whatever it is) is coming through the sealed plastic wrap they are in. The goo was on the part bags that were under it but had not penetrated them, thank goodness. My cat was dead - you might want to check on yours . . . . just say’n.