I had an epiphany. I would get many more projects done if I focused on vignettes.

This is the CMK “Hue City Marine” figure. Now, anyone with a passing knowledge of the subject knows that this is definitely NOT a Hue City Marine. Nonetheless, it’s a superb figure of a cookie cutter early-mid war infantryman. The impetus for this vignette was twofold:

I’m sure I’m not the only modeler afflicted with “Freakin’ Huge Diorama Syndrome”. It’s been my downfall as a modeler since I was a kid. I’d see an amazing diorama in a modeling magazine and dream up an amazing battlefield scene featuring platoons of figures. The end result are carefully padded boxes full of half finished figures.

So, my intent was to just put this guy up in a vignette using what I have. The other downside of “Freakin’ Huge Diorama Syndrome” is that I rarely get around to scenery and foliage, so I wanted something simple by way of ground design that I could put on a single figure display base. The goal was to get this man done and not have another figure sitting in a box.

This is the end result. I’m very pleased with the figure. CMK inexplicably only molded one set of E-5 chevrons on his right sleeve, so I had to swag the other sleeve. I didn’t add a unit patch, preferring to make him a generic junior infantry NCO. CMK has some amazingly crisp detail, and almost all of it is molded as a part of the figure. So there’s no getting rid of the butt pack this time. Coupled with his loadout, this locks him into a late 1966 or possibly a very early 1967 timeframe. 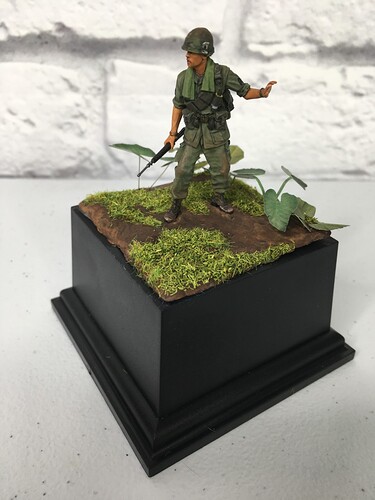 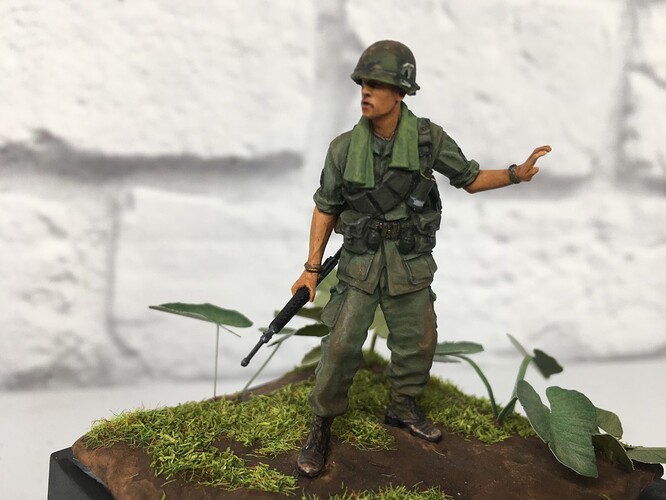 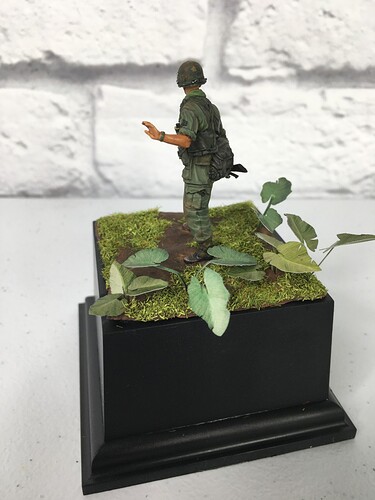 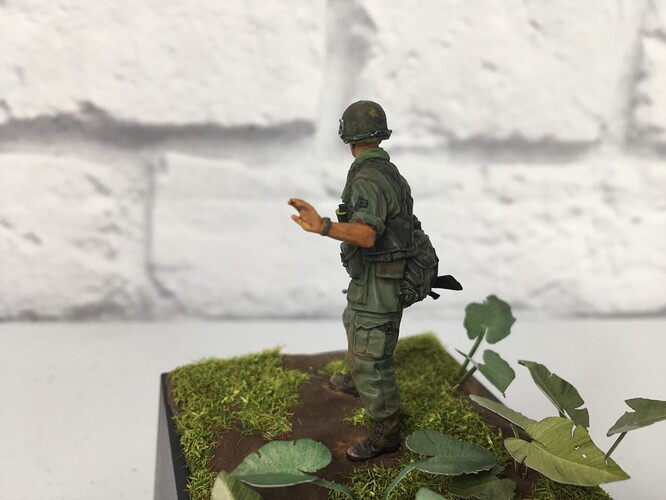 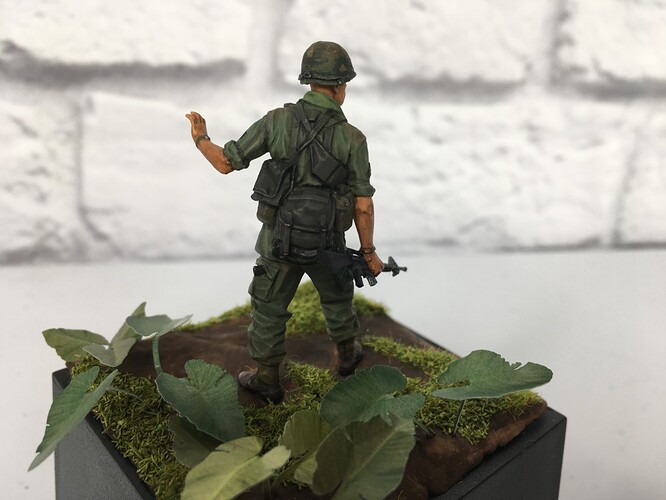 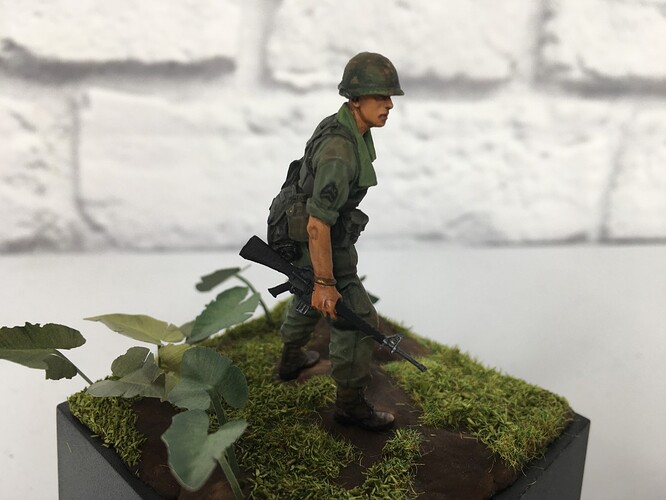 The figure looks great, the scenery suggests jungle without over doing it and not being completed.

What Scale75 paint range did you use: scale color, warfront or scale artist? They have a few more but these seemed the most likely.

Thats an excellent rendition and I think you’ve done great with the green tones. A simple, but effective setting too.

Travis that is an excellent job on that figure! Nicely done shadows and highlights. I don’t see any shiny spots so you’re good there.
I switched to Vallejo’s many many years ago after trying oils and humbrol. They definitely have to be thinned and it’s taken me a long time to learn to blend them using a retarder. I’m finally getting the hang of it. The paints you’re using look great.
If you’re into huge dioramas like I am too, check out Dan Capuano. He hasn’t been active in the hobby for a few years lately but he would bring gear giant dioramas to shows here in NY and else where. One of the best I’ve ever seen in quality too.

Nice to see a great figure from CMK as some of the early CMK figures were pretty horrible and poor in scale. Thumbs way up!

Looking good to me, for this scale it’s an excellent work
I’m using Scale 75 artist range and the normal range as well, I find it perfect for clothes and equipment for skin it’s to mat when you paint bigger figures.

Thank you very much for the kind words!

I am extremely pleased with Scale 75’s color scheme. It’s the closest match I’ve seen for faded OG-107. Their method of painting a single color uniform was new experience to me and I was glad to learn a new technique.

Aside from the uniform, I used a hodgepodge between Tamiya acrylics and Vallejo. I am very particular about the colors, so I try and get (or mix) what matches the best. I grew up on Polly S acrylics, so even though they’ve been out of the business for many years now, I still mourn that loss.

Have to agree with everyone here. You’ve done a great job on this. The groundwork looks just right and sets off the figure a treat! Hope to see more like it from you in the future. I also have this one in the stash and, seeing this is enough for me to have a go at it too. I can attest that it is a really nice sculpt as well. I’ve also got the USMC M60 gunner from the same range (yep, the one with the army flak vest…) and that’s very nice as well. Have to agree with Peter though, CMK’s stuff can be very hit and miss. I bought the OIF stretcher party around the same time and that will take a LOT of work!
G.

From where I’m looking you’ve done a wonderful job on this figure. Uniform color tones are spot on for me. Yep, it ain’t Hue, not by a long shot, but who cares, you’ve done it justice, IMHO. Not one for acrylics myself, yuk, you got it pegged quite well. For me, acrylics are for base coats or small items that don’t require too much work. I’m an “oiler”, nuff said, lol.

Shiney figs, well I’ve always done a dull coat after the oils dry not only to get rid of the oil sheen, but to protect the figure as well. Often that dull coat goes on before I do metallics or light washes.

Great job on the base, all over, very well done!

What dull coat do you use? I paint minis for wargaming and I’ve been messing around with various matte coats to protect them from handling.

Although I only use oils in very specific instances, and usually with armor, I’m glad to see that there are still those who are keeping the “old ways” alive painting minis with oils.

What dull coat do you use?

Howdy, Apache! Believe it or not, I still use Testors rattle can “Dull Cote”. I know, I know, a lot of guys are cringing at hearing that, but I’ve been using it for everrrrrrr.

Not sure if the formula has changed, but long ago I ruined a figure using it, not any more. Also, a technique I use is to shake the snot out of that can, get it warmed up a bit, then give a short sweep across the fig all over. Then I quickly hit the figure with an old hair dryer on high heat for a few seconds to quickly dry the main portions, then back off to low heat until the coat is completely dry. Be careful not to overheat any delicate parts, they will bend at the most inopportune time.

Kudo’s on your figure and base

Polish - I’d like to see your work. I’m amazed that you’re getting consistent results from Testors rattle cans. That’s the reason I’ve been looking into other matte coating options. I’ve turned too many figures into shiny, sticky messes with the rattle cans. I’ve heard that Tamiya’s TS-80 matte clear is a good option, but I haven’t tried it.

I use Tamiya flat regularly with good results. Just as regularly I had problems with Testors so I don’t use them and haven’t for a long while

Well, Travis, there are quite a few options out there, but you’re gonna have to test each one till “you” are satisfied. I’ve personally had a lot of luck with the rattle can method, especially when using a hair dryer immediately after.

This is an offsite gallery, but you can peruse the figures and tell me what “you” think about the rattle can method. https://www.track-link.com/gallery/modeller/szuleski

You can call me Ski, Bro. Cheers

Well I’ll be darned! I didn’t realize you are THAT Steve @PolishBrigade12, I’ve been admiring your work for ages, you are one of my modeling mentors without a doubt! Thanks for sharing your work.

@ Apache26. Very nice vignette all round!

I’ve heard that Tamiya’s TS-80 matte clear is a good option, but I haven’t tried it.

I’ve started using ‘Tamiya TS-80 Flat Clear’ on a few builds and I’m really happy with the results thus far! Though I’m generally an acrylics guy, I’ll make an exception for this stuff.

Ski, that is truly magnificent work! And I’m amazed that you can get such good effects with oils. I’ve read about the oil painting techniques with figures but never tried it. Perhaps one day I’ll give it a shot.

I never thought to use a hair dryer. How far away from the figure do you hold it? Since the wargaming figures often use the really soft plastic, I would be concerned about melting them.