How much detail is ENOUGH

Now this is in the wake of super detailing a 1/25th scale figure. So, naturally I have detail on the brain.
Now because I am a controversial poster, I am not quite sure of the responses I’ll get, but here goes any-who…
How much detailing is enough, where do you draw the line, I mean let’s face it, there has to be a point.
Now naturally, the smaller the scale the line is easier to define. In 1/72nd I have seen some masters at their craft, and they clearly defined the line. Those in and around Tacoma will remember Les Stunt and his works.
1/48th scale the line begins to blur. Think about all the Monogram B-17 builds. Man, I saw one where the builder not only had accurate spent .50 caliber rounds, but pencils and protractors for the navigator… as well as zero on the O2 gauges. And that was before the advent of aftermarket decals.
Then we come to 1/35th and 1/32nd. Where is the line now. I think about Bob Letterman, and Franzois Verlinden. Some of their works were not only masterful and inspiring, but out of this world for details.
Last but certainly not least is 1/15, 120mm and 1/6th. These are scales that have risen and dropped in popularity. I suppose initial cost, where to put it when you’re done, and for me, where in the blue blazes do you draw the line. I spoke to a builder recently, in his 1/15th scale Tiger I he included gauges that can sort of work. This being accomplished through the use of tiny wires in the gauges and a magnet…
I don’t even want to think about the kits available in 1/6th scale. So where is the line, after all now model EVER was 100 percent accurate. There have been some darn fine builds, and NOBODY can ever doubt that, but, and this is the biggest BUT ever, we all know that is I could magically shrink down a real say B-24. It wouldn’t look anything like hobby builds, just couldn’t happen, and that’s for the better and the worse of it…
So where is your line

It’s a hobby. Whatever you choose is the right amount.

If it has a plastic barrel, I will change it out to a brass or aluminum if one is available.
…I just don’t like to “scrape” barrels. Removing seams on a 1/35th MG-34 or .50 cal usually removes some detail. Besides, turned barrels look so much better and the cost vs. time is worth it.

If there’s photo etch made for it, most likely I’ll get it. That doesn’t mean I’ll use it all though.
…I feel that adding photo etch makes (usually) a more detailed build and a lot of times, more accurate. I’m not going add pieces that are so tiny that tweezers are guaranteed to feed the carpet monster nor am I going to replace perfectly suitable plastic pieces.

If it comes with “rubber” wheels (mostly 1/35 for me) I will probably change them out for resin offerings.
…I’ve been lucky to not yet run across the tires that melt plastic or perhaps it’s because I’ve primed and painted the rims first? I dunno. Too often, the “rubber” tires are just poor examples of what the tire really looks like. Oh, there are usually a couple/few different style tires in resin that would be appropriate the the model being built. Resin gives you more than one option vs. one set of kit supplied tires.

Resin interiors.
…For aircraft it’s an “I’ll probably get.” Cockpits really can’t be hidden (especially with fighters) and the after-market interiors are just so much better. Detailed cockpits aren’t really needed if you hang a plane from the ceiling. For 1/35? Totally depends if the interior WILL be seen or if doors/hatches will be built open. If it’s not something where the interior will be seen (closed up), then I won’t purchase an interior.

I don’t think there’s a right answer to how much detail is enough or not enough, …. other than to say that enough is exactly what each individual is comfortable with. Speaking for myself, my work will never be entered into competition (mostly because I live in New Zealand and there’s not much if any meet and greets let alone competition here), never seen by my friends or peers, and so the only one generally judging my work is me… so I set the bar for myself (I do like to post my stuff on this forum and I do welcome the judgement from others on this forum though!).

My partner thinks I should be certified when she occasionally pops here head into my office to see what i’m up to, and she’s probably right.

For example, this evening I thought i’d try and get my mojo back in a long stalled project, Tamiyas Stug III Ausf.b, so thought i’d do something easy…. like build the jack.

I’m 2 hours in, or more, and so far I have added 2 x copper grab handles, added the seemingly missing stiffeners in the pad at the top (the white cross items) started making the brackets to hold the jack to the vehicle…. and decided I don’t like the 2-dimensional wing nuts so am replacing them with plastic bronco ones, you can’t really even see it in the photo but there is a couple of 0.15mm diameter copper rods running across the top clamping members that will marry up to the plastic wing nuts. 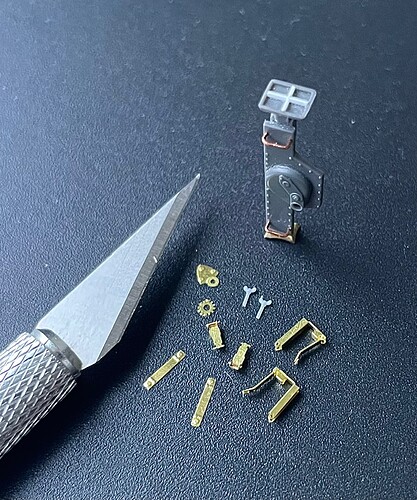 Probably another 2 hours to go to finish this sucker off.

So on balance I agree with my partner in that I should be certified. But, this is my level of what’s ‘enough’ for ME. In saying that I see others on this site who can knock out some absolutely stunning vehicles, in short periods of time… and I do get jealous, but i’m old and set in ways… which means painstakingly slow builds……

How much detailing is enough, where do you draw the line

For me this is defined by my (declining) capabilities. I’ll give it my best shot, but the results fall disappointingly short of what I used to achieve; not that they were ever very good. Nowadays, with figures, think “Cheap Garden Gnome” standard regardless of scale…

Shep Payne said it best! if it can’t be seen easily don’t do it.namely if you are doing a 1/35 driver’s compartment and can not see the gauges and just the box, just make the box. Everything else is personel choice,and pride.

I think it depends on the build, individual, and detail in question.

Some kits want certain access covers puttied in for a certain version of an aircraft. That’s across the line for me, particularly in 1/72 scale. I get more joy out of seeing a well-finished, detailed model on the shelf than knowing that every panel line is perfect. But as others have said, some details are so obvious they can’t be ignored. Some are iconic to a particular variant (the Mustang prototype had a short carburetor scoop not reproduced on any 1/48 scale kits…I’ll have to modify that).

I don’t know that I’ll ever understand folks who putty ejector marks and paint the interiors that will be completely invisible. Like filling ejector marks in the aft fuselage of an aircraft. To each their own! At a certain point, this is just a hobby–if you enjoy doing it, that’s reason enough.

In my book it depends upon the kit and the subject. I’ve done some spur of the moment decision to super detail this kit or that way beyond what I should and then asked myself afterward why I did half of what I did. On the other hand, I’ve had some builds where afterwards I’ve looked at the completed project and asked myself, why didn’t I upgrade or add this or that? Some kits I am quite content to build OOB and be happy for it to fill a gap in my collection. Others for some reason capture my imagination and a vision forms of what I want to do beyond what is in the box.

For me it varies. I plan on a certain level of detail before I start. For the most part I do not detail areas that are not seen. I am planning a super detailed T 54, engine compartment, and interior. But that is the exception. I like the PE parts that are an improvement over the original piece. The rest of the PE goes in the parts bin. I like to make/scratch parts that do not come with the kit. I build to the level that my vision, and hand shake allow. I find that super detailing really includes paint and weathering also. I am always trying to stretch my skills there. Figures are my biggest challenges, yet I see people who sculpt and paint magic in 1/35th scale so I know I can improve…a lot… So, it all goes back to what goal or challenge you set for yourself.
l

For me depends on the subject matter, for aircraft or ships aftermarket will only be used if it makes something easier as these are of a secondary interest.

For armor kits, I tend to alternate between out the box/nearly out of the box to detailed depending on when the kit was released. I’m ok with my models having different levels of detail. Probably breaks down to four levels of detail normally.

For me it’s a matter of where I think my skill is at and my overall interest. I started building again 3 to 4 years ago off and on. My early stuff was pretty much OTB minus stowage. Then a few years ago I decided to challenge myself on a M4A3 by Tamiya. I actually got burned/overwhelmed. Set it aside a few years ago and a few weeks ago dove back, actually reworking some things in the process. Same w my Italeria M32, I knew it had things I could address so dive in w kit bashing, detailing, little scratch building, hijacking some PE etc. Sitting next them was a strictly OTB Revell Leopard A6 ( which I posted about in the armor forum) which I’m not bothering to correct or modify. What was supposed to be a snowy shutin for the weekend project turned out to be anything but.