Quick trivia question before the topic: in which Bond movie does he say he likes his martinis stirred not shaken?

So I remember a long time ago someone saying that Tamiya paints should not be shaken and I’ve kinda lived by that until now. Is it true, or is it a myth? Tamiya paints reconstitute very quickly with a quick stir, but I’ve been using some AK real colors and a quick stir doesn’t make them paint with quite as much alacrity, so I’m wondering…

I shake and stir Tamiya as needed.

No idea of what the proper or best practice procedure with Tamiya paint would be. I have a few bottles from the late 1990’s that have been stirred and shaken as needed that are still good.

Only time Tamiya has went bad on me was when I was lazy and didn’t keep the bottle cap and bottle top threads clean and let paint build up so the bottle didn’t seal properly.

I never heard that one. I shake all my paints. If there is a problem I must be too dumb to notice it.

You have it backwards. Mr. Bond prefers his martini’s shaken, not stirred.

In You Only Live Twice he is offered a martini stirred not shaken which he says is fine, otherwise, he does prefer them shaken…

I think it’s probably an urban legend not to shake them then. I will be trying it with the AK paints to get them to recombine.

Bond first utters ‘Shaken, not stirred’ in Goldfinger. However, In Dr No, a waiter brings him a drink and says ‘mixed like you said, not stirred’ and Dr No repeats it later.

I use a vortex mixer to shake those paints (AK, Vallejo, MiG) that come in the dropper-tipped bottles. Just invert them with the cap still closed, place the tip in the mixer cone and press down for about 10 seconds. Does a great job of recombining the pigment and carrier, and much easier on ones wrists!

I shake Tamiya paint, but a quick shake by hand usually suffices. I do have a paint shaker but found generally not needed with Tamiya, unless older pot with smaller amount of paint left.

I do use the paint shaker for paints in the eydropper type bottles as find they need a bit more effort to mix well, particularly metallics.

Yes thzts what i used yo do with my TESTORS paints.

Back in the olden days of Polly S,we stirred them as shaking entrapped air bubbles,just my 2cents.

I use a mini, battery-operated cocktail stirrer that I got for a couple of $$ off Amazon.

I did have to slightly reduce the diameter of the mixing disk with a Dremel to make it small enough to fit into the neck of a Vallejo paint bottle, but I can’t believe that I went decades and decades before I got something like it. Once I’m done stirring the paint, I simply stick into a thinner jar and run it for a few seconds to clean it off.

A brilliant little piece of kit!

This is not the exact one that I got, but it’s very similar. There are probably a couple of dozen slightly different designs offered on Amazon, and a number that are half the price of this one.

There were times where I didnt stir my Tamiya flats enough and they ended up spraying with a sheen to them,you do need to give them a good stir at times

I’ve never seen this with tamiya but have with real colors, if they aren’t mixed they come out glossy. Good to know this can also occur with tamiya

D’oh!! Great idea. I stir Vallejo with a tooth pick and it always resorts in a mess because the tooth pick is too short.

I’ll have to pick this up. Vallejo are too thick for a simple shake to loosen pigments off the bottom

@Mead93 : Once I reduced the diameter of the stirring disk to fit into the Vallejo bottles, it turned into a nearly perfect little tool. It’s so easy and quick to use that I was able to stir up all 100+ bottles in a short session at my painting bench.

Just be sure to stick it into the paint before you turn it on and then turn it off before you remove it from the paint! LOL!

That’s true about the semi-gloss sheen with Tamiya. I stir Tamiya with a toothpick.

A Gundam modeler said to spray Tamiya with their Flat Base to avoid the Tamiya paint drying mid-air using an airbrush and achieving “sandpaper” texture on the model. That also cuts down on the gloss.

Gunze Sanyo sprays the best from an airbrush. AK Interactive’s 3rd GEN also sprays pretty well if mixed with AK’s 3rd GEN thinner. The other brands have a tendency to gunk up at the airbrush nozzle or are too thick or thin even with mixing and thinning.

and it always resorts in a mess because the tooth pick is too short.

Try one of these: 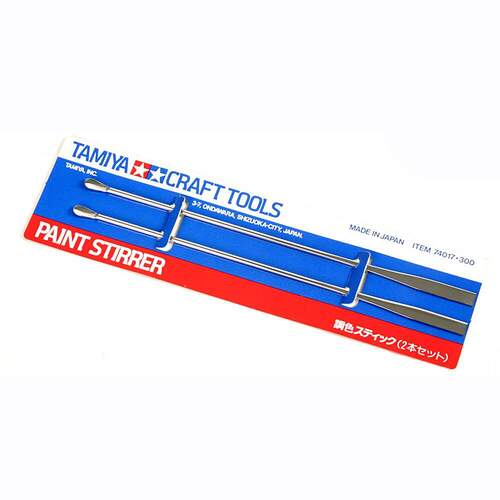 I use these - they work extremely well stirring Tamiya and other brands of paint.

That’s exactly what I have Michael and it works great. Just gotta replace the batteries once in a while

I have some dental tools that look very much like that and they work well too.