For the Land of the Rising Sun campaign I will be building Tamiya’s IJN Musashi. This kit has been sitting in my stash for a long time, just waiting to be built. Because I have moments of madness I will be building her concurrent to my Arizona.

Unlike Arizona, I will be going light on the AM (for now). I have the older Eduard PE set, a deck from Pontos and some Lion Roar 25mm’s which I am undecided if I will use.

This is a rebox but the molding is pretty old. 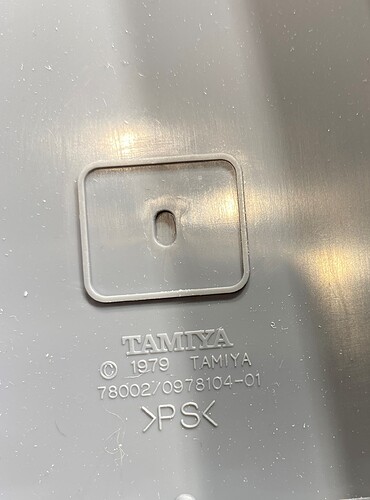 Started small today by sanding down the seam running down her hull. This ship is a beast and speaking of the Arizona, this is the 2 hulls sitting side by side.

Just a small difference in size…

This is cool… I have this old monster lurking in my stash as well - can’t wait to watch your build unfold!

Nice. Will be watching this with great interest…Cheers Mark

Tuned in and watching, taking notes.

Got the prop shaft and rudder installed. Such a pleasure to install compared to my last 2 ships. It is shocking to me that a kit designed over 40 years ago goes together better than much newer kits. Thats Tamiya for you. Almost 0 sanding required. 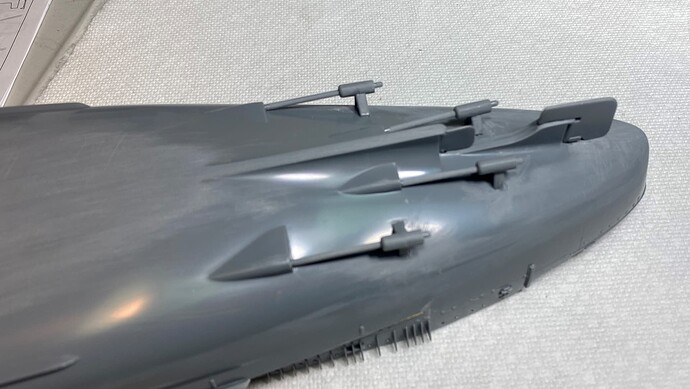 From there I moved onto the deck. One of the issues I came across with the PE was this bit. 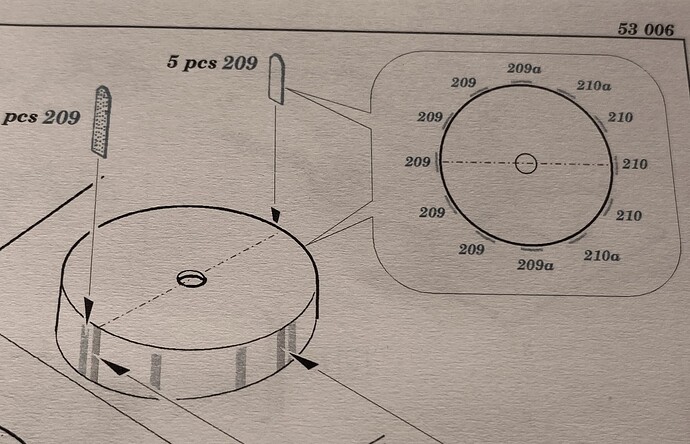 Had to figure out how to space these properly on the kit. Ended up coming up with this. 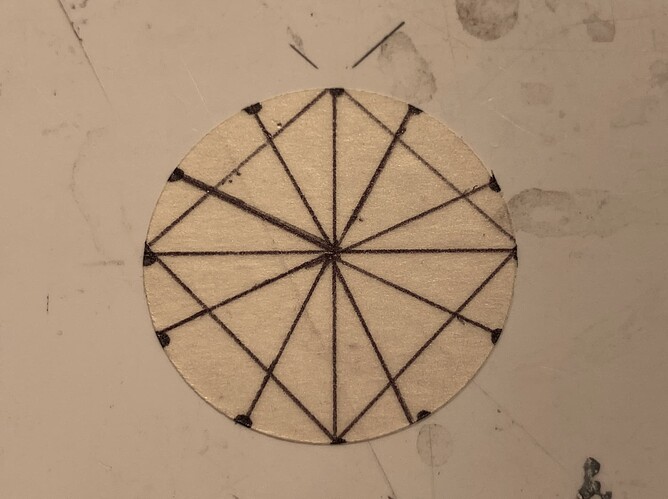 Not 100% accurate but good enough for government work. Kabuki tape cut with my circular cutter and marked off. 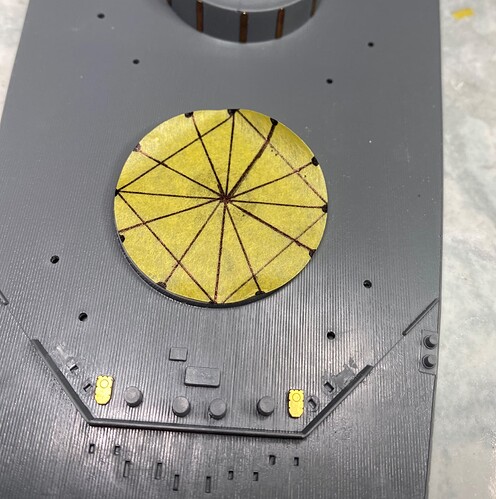 Got those bits in place to my (mostly) satisfaction and moved onto the 6inch gun barbette. 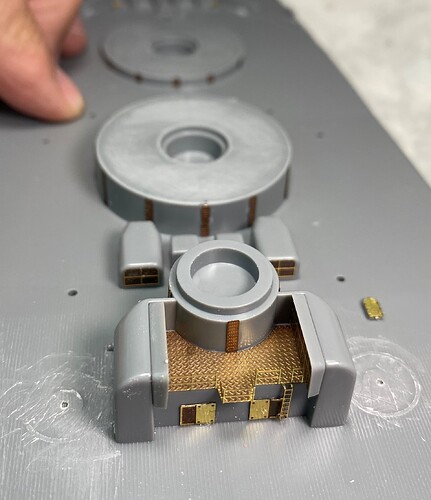 These old Tamiya kits still good for their age, that etch looks fun, will be along for the ride.

I really wanted to build up the rear deck piece with photo etch etc like I had done on the fore deck. Would have made it easier to maneuver pieces around. But after doing some test fits I decided against this. It took a lot of forceful persuasion to get it on there and in correct position. Also took a lot of tape to hold it in place while the glue dried. Got it done eventually though.

Just a small difference in size…

Following along with interest, Rory

Having the basic construction done before adding the etch to the stern area may actually turn out to make things a bit easier for you; does the Eduard etch include all those exterior supports to the flight deck? If so, keeping things aligned will be MUCH simpler with the plastic components already securely in place.

Anyway, it must be a pleasure working on this model after wrestling with that pig of an Arizona kit…

does the Eduard etch include all those exterior supports to the flight deck?

It does not. Its the ‘basic’ set from 2005 so doesnt have a lot of the PE you would expect from a more modern set ala LionRoar, Infini or Pontos.

Honestly I am happy with that. This is hopefully going to be a nice easy build with a minimum of $$ outlay.

The anchors were a bit dodgy. The shank was a tiny nub so they looked like they were just hanging by magic. I replaced it with some plastic rod and it looks much better IMO. 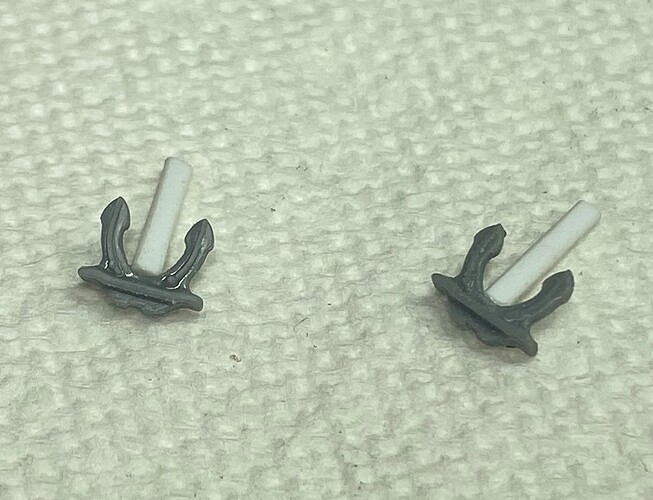 Hard to see against the red but now the shank goes into the hull under the rim. Looks like an actual anchor now. 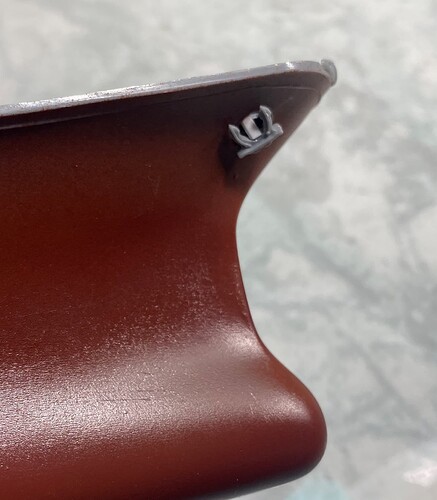 Some progress on the bow. Nothing extreme, just enough to add some detail and realism. I am leaving the molded chain on as I dont want to risk any damage to the deck texture by removing it. 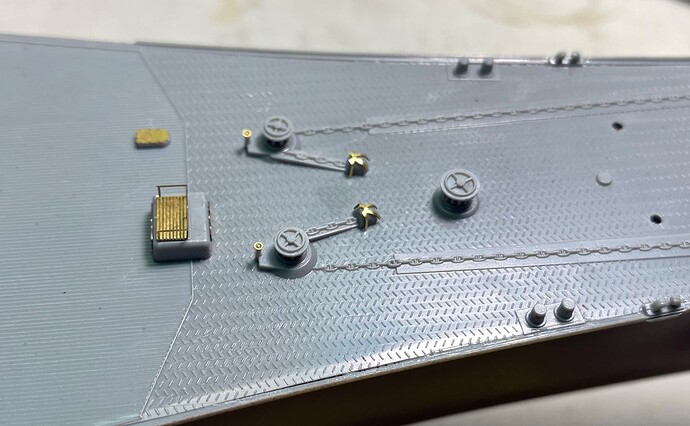 Also started work on the superstructure. One of the reasons I originally bought this PE set is that it adds deck texture which I am loving. 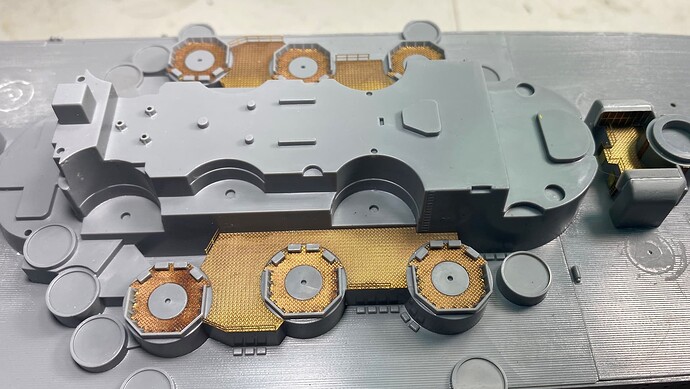 Still lots to do in this area. I will be delayed a bit as I will be travelling the 5 days or so.

I like it so far. Very nice and clean work. Nice fix for the Anchors also…Cheers Mark

Apologies for the lack of updates. I have been working on Musashi, just havent been on the PC much the last few weeks.

Progress has been slow but steady. I have pretty much completed the PE build up on the lower superstructure and the stern. 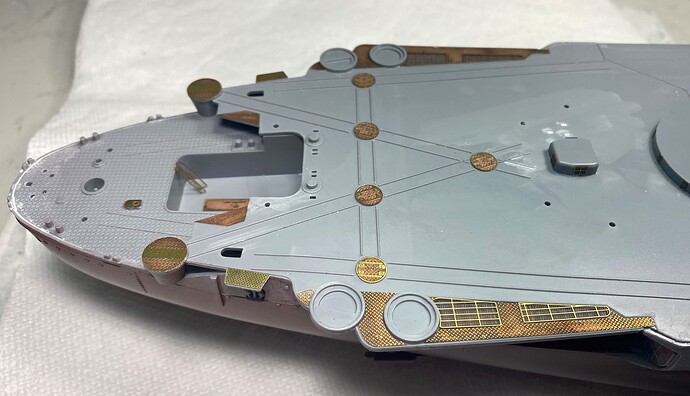 Definitely is adding a lot to the old girl. I am fairly close to throwing down paint on the upper hull and superstructure. I hope to get that done this week.

Wow, that may be the “basic” Eduard etch set, but the improvements are huge!

The etch on the decks is a massive improvement, very tidily done too.

Paint is on. This was a bit of a bugger to manhandle around. 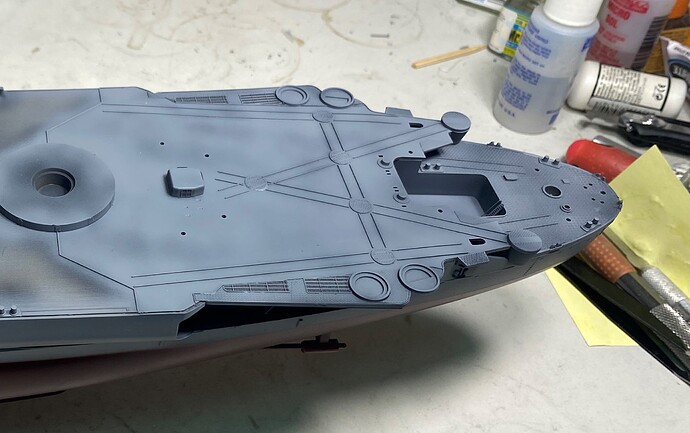 The grey was painted over black primer which allowed me to get some nice mottling going. Deck is mostly bare plastic still so the deck has good grippage.