It is precisely because of them.

Also I thought some IDF designed AT weapons where built to arc up and go in through the roof of the turret?

Some variants of the Spike ATGM family are designed like that.

The BGM-71F TOW 2B round is of this top-down strike design and is currently fielded by all US and many other countries. The “roofrack” armor will do nothing to stop this round.

Too bad that we can’t send more …
Denmark is also sending a load of stuff.

So much for the low profile. You will see the moving luggage racks long before the tank can crest a hill for a shot. Also makes friend or foe much easier to identify.

You will see the moving luggage racks long before the tank can crest a hill for a shot.

I think they’re more concerned about urban warfare, i.e. launching RPG-7s from rooftops. It’s not like that thing can stop anything else, anyway…

It won’t help provide much protection against tandem warhead munitions such as those fired from the RPG-29. Besides, in looking at several videos, you’d have to be shooting almost straight down for that “armor” to be effective. Shooting from a building at angle onto a tank in the street renders it nearly useless.

The contraption also leaves the engine hatch area exposed so when firing from above one might as well aim just behind the turret.
Getting into position for such a shot is another matter …

It won’t help provide much protection against tandem warhead munitions such as those fired from the RPG-29.

That’s the exact reason I gave the RPG-7 as an example and not the RPG-29, in case you missed it.

I didn’t miss it. Armor such as that (again, assuming you’re firing straight down on it as from an overhead position on a bridge) is much more effective against an RPG-7 than an RPG-29. Many, many open sources tell us that the purpose of slat armor is to pre-detonate the warhead, which indeed it does, but that’s not why it was designed. Slat armor defeats RPG-7’s because on impact it forms the slightest deformation in the shape charged warhead, which degrades or prevents its ability to form the jet of hot gasses and/or metal. (EPF) But again, that armor is not preventing a hit from an angle, rendering it as nothing more than a feel good measure in most cases, irrespective of what you’re shooting at it,.

Well… no indication of what hit this tank, but obviously, if it was from above, the overhead slat armor didn’t do the job. 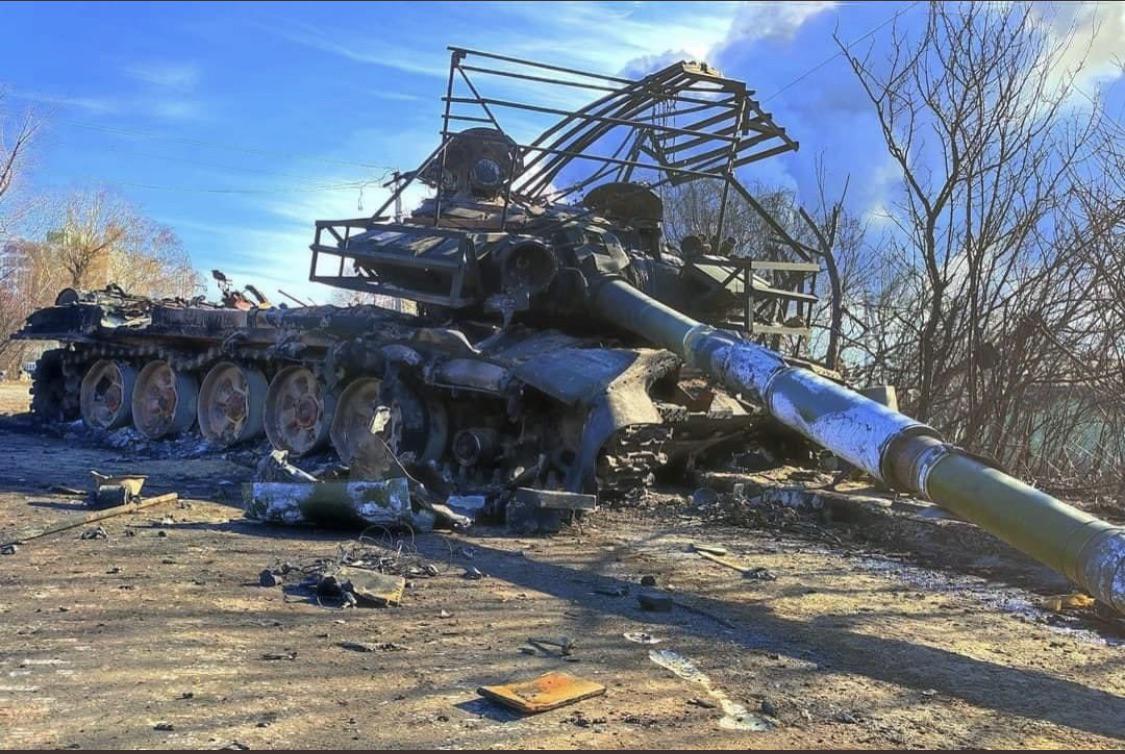 Holy smoke. Slim chances of survival in that wreck …

Nope. That is typical of the auto loader Soviet design tanks. If the ammo rack beneath the turret is hit, a catastrophic kill like this results, and if the detonation is immediate, the entire crew is killed. Most contemporary western designs have their ammo in separate compartments with blast panels on the turret roof to vent the force of any penetration blast away from the crew, greatly increasing their chance of survival.
It’s easier to replace a tank than a trained experienced crew.

This was part of the reason for tanks being neutralised in Chechnya- many Chechens had served in the Soviet army and knew of such weak-spots. The Ukrainian forces will know of these too, and vice versa in terms of Ukrainian armor.

(And as @18bravo pointed out, the roof rack is not especially useful when urban fighting is required. Vehicles specifically designed for the task like the BMPT were the end result of problems encountered while fighting in urban areas of Chechnya. The roof rack is probably something derived from experiences in Syria where urban engagements seemed to be fairly common too.)

What I’m finding surprising in photos and videos is that there does not look to be much Russian combined arms task forces or teams…. tanks with infantry or other such combinations. Lots of video of ADA assets out front with no accompanying infantry or tanks. Are they being separated from the usual combat arms by defense? So much footage and photos without context to make sense of what’s being seen.

the weakest point of armor protection on any tank is the top side. I can see why they did this, but it also appears they’ve found away around this new form of protection. The new anti tank rockets now carry a double shape charge to combat reactive armor. Saw film footage of them in use and they work. When the mouse gets smarter, the trap only gets better
gary

Yes I had the same observation stik. Telling some of my friends that very thing today that there doesn’t look to be any supporting infantry to deal with anti armor teams.

Seen quite a bit of footage now of Ukrainian tank killers recording their hunting, seems that more often than not they are using their knowledge of the terrain to use more conventional RPGs at close range against Russian vehicles, rather than Javelins and NLAWs. Although it looks like those are being employed regularly as well.