A heavy escort? What about calling it the Clementine, Winston Churchill’s wife’s name?

The smoke dischargers are actually direct from the A39 tortoise. Same position and all. I think they add to that stoic, bloody-minded just stick the damn thing on pragmatism that British tank designs are blessed with. 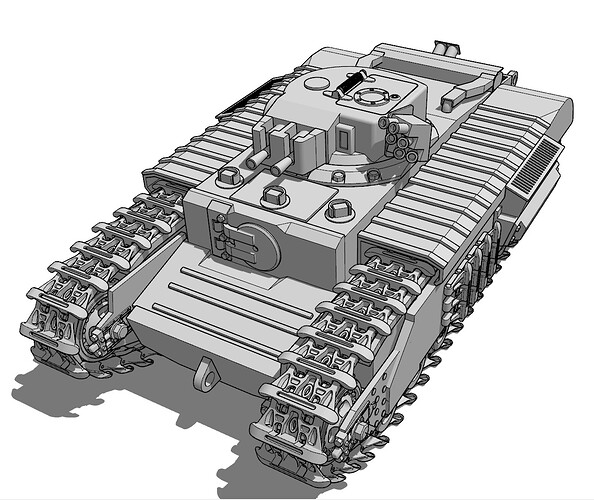 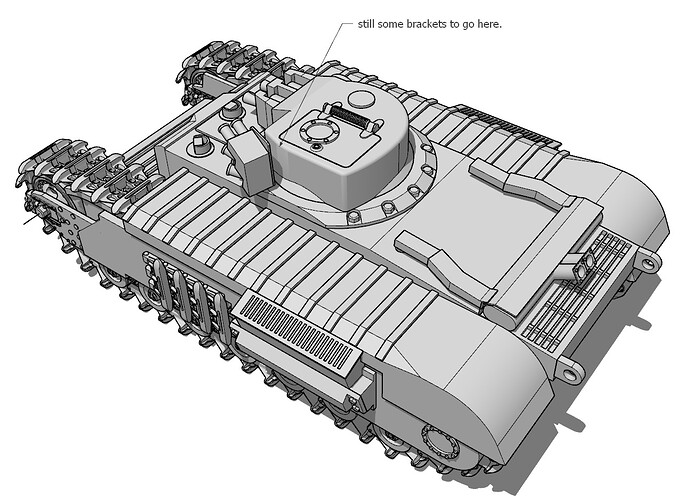 Will this be printed up and be for sale sometime?

Re the dischargers, why not the original Matilda ones, but mounted on both sides rather than just the RHS?
This video has some close views - Tank Matilda WalkAround - YouTube -
The empty bracket - 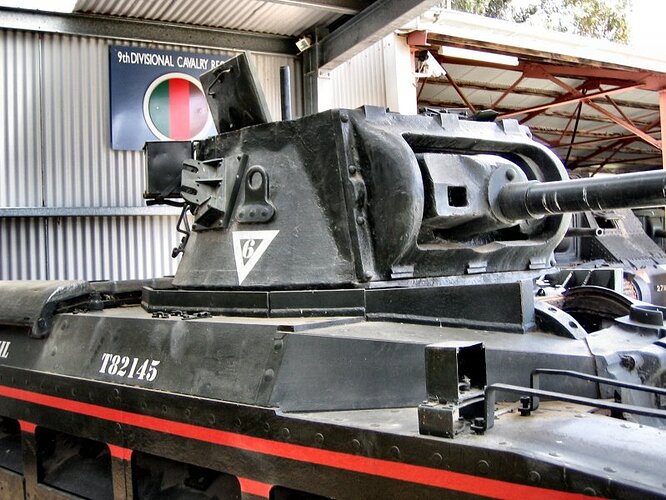 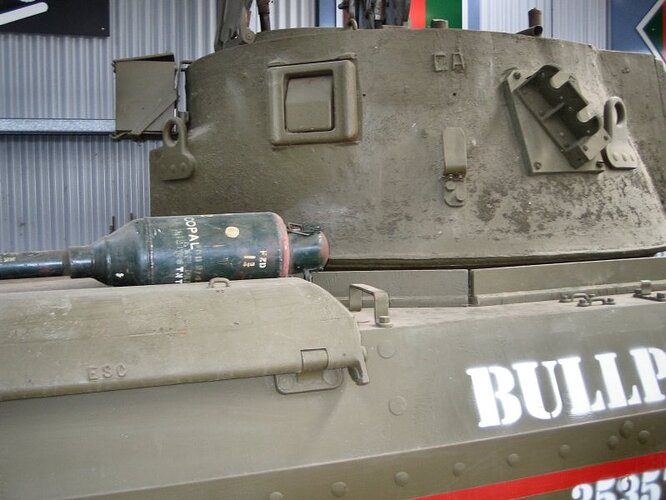 An argument against the Cent/Tortoise ones, if the vehicle is knocked out with the discharger over the drivers hatch - no way out (unless there’s a belly hatch?) That was a problem with Matilda too.

I’ll make the files available somehow… haven’t figured that one yet. 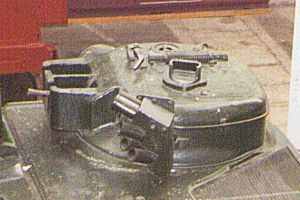 …but I think yes, they are a tad clumsy. I’ll have a go at some late pattern 4" smoke dischargers, as fitted to firefly. 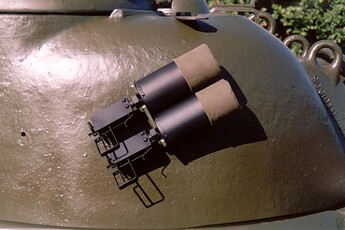 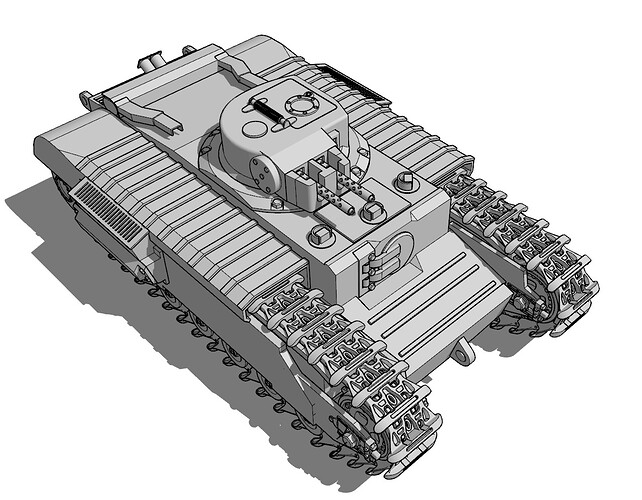 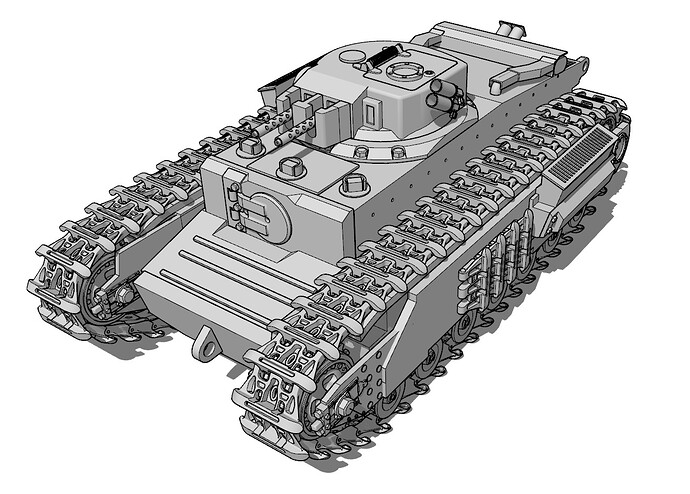 For a light tank it looks like it weighs in somewhere north of a Maus, but I like what you’ve done with it.

Losing the track guards pulls it back a little more from the Churchill which I think is important if you want this thing to be a truly distinct beast.

I also had to admit it, but the switch from the Vickers to the Browning setup does look better as do the updated smoke dischargers.

Question about your periscope/vision block setup.

I assume this is a two/three man tank? If the driver is sitting in the middle where i think he is, how is one supposed to see out the two lateral periscopes? Should they not be mounted more centrally?

Looks good. Peripherals - Smoke Dischargers in this case got reused, both Tortoise & Centurion, maybe others That Firefly set looks remarkably like the Matilda II set, so probably same thing there. US did similar - lights, Pioneer tools, periscopes etc.
Brownings look good, but twin 30’s or 50’s or mixed?
Removing the trackways would dissuade boarders. Still a lot of Churchill influences - not a bad thing - side air intakes/cleaners, bow & stern configuration.
Periscopes - 3 for the driver here, so better off than with Valentine with only two.

Churchills can be seen in photos without track guards. which is nicely reminiscent of the original matilda 1. so I thought I’d throw in the option.

Vision blocks/drivers hatch still need playing about with. Nothing final there. I’m thinking escape hatch underneath as well.

Might try it with standard fifties with flash hiders, but they won’t be as exciting. (edit: tried it. way too weedy) 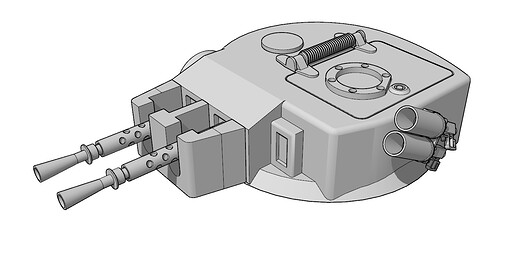 Played around with the drivers hatch. figured there’s enough room in the hull to shift the driver sideways a bit, so now his hatch will, for the most part, clear the turret. 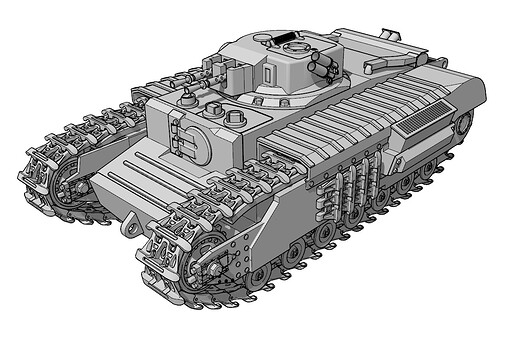 also started adding details to the back plate. 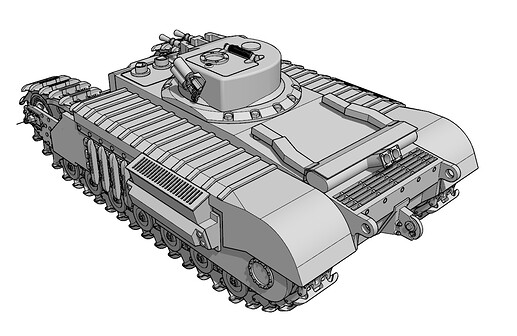 Did you consider two different guns, i.e. different calibers, similar to the Pz II?
One for anti-personnel use and one with a heavier punch to handle softskins, MG-positions at greater distance and possibly light armour such as Sd.Kfz. 250/251?
Maybe a 20 mm together with a .30 or similar?
Maybe the Polsten came to late for your tank …
“The first 240 guns were produced at the end of 1943, and a further 13,548 during 1944”
http://www.anti-aircraft.co.uk/polstenquad.html

it’s a very small turret. I did consider polsten. I’m thinking this tank would be mid/late war.

Doing some basic breakdown of parts. 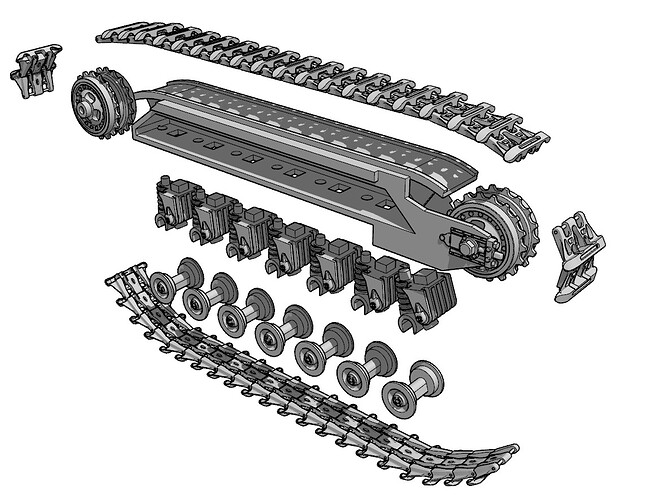 …shouldn’t be too difficult. hopefully it prints well.

Loads of details to go though.

Nice. Now you’ve moved the drivers hatch, where will the hinges go? - Front, back, side?
Re the turret, MG’s take up a bit of room, as do the ammo belt feeds - T50 turret example 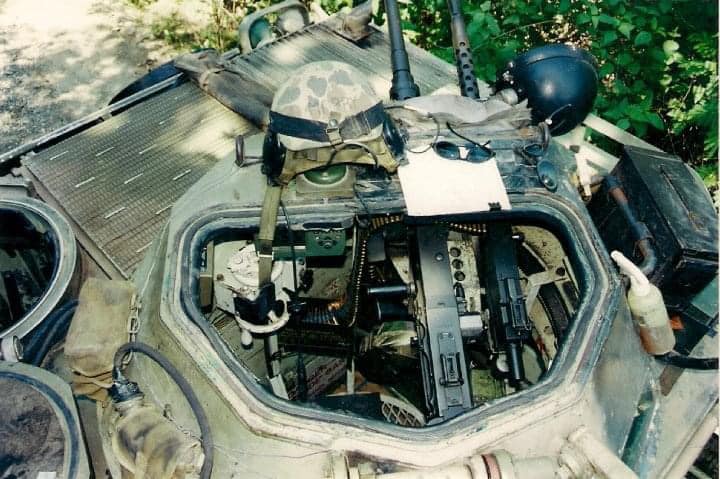 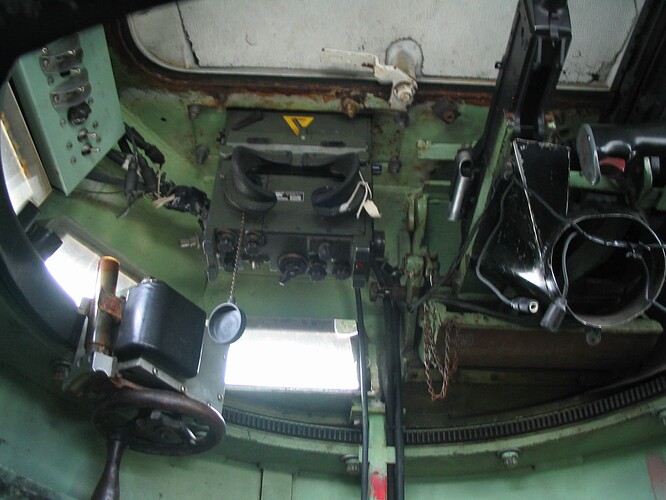 196220060_832629774317108_4124410705088847448_n1920×1440 173 KB
The Polsten would probably be worse?
The ring on the turret hatch - is that another periscope? You’d probably want the Russian copies of the Brit periscopes, because they made a slight change, their copies were apparently watertight, the originals leaked.
If you go with a crocodile variant, trailer attached to the tow hook, would you go with a fixed flame gun on the hull? Plumbing to the turret, with traverse might get too interesting?

yep, extra periscope on the turret lid. hull hatch hinges on side.

I’m thinking turret for the flame projector. I’m sure the boffins could figure it out.

Edit: See. the fifties DO fit. at least within the deranged parameters of my imagination. 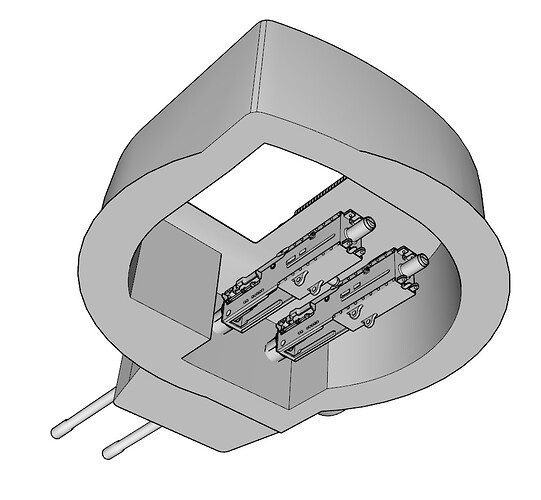 Yep, they do appear to fit, however the ammo feeds need to be factored in, empties not a huge problem as they drop out below, down chutes into bags as per T50 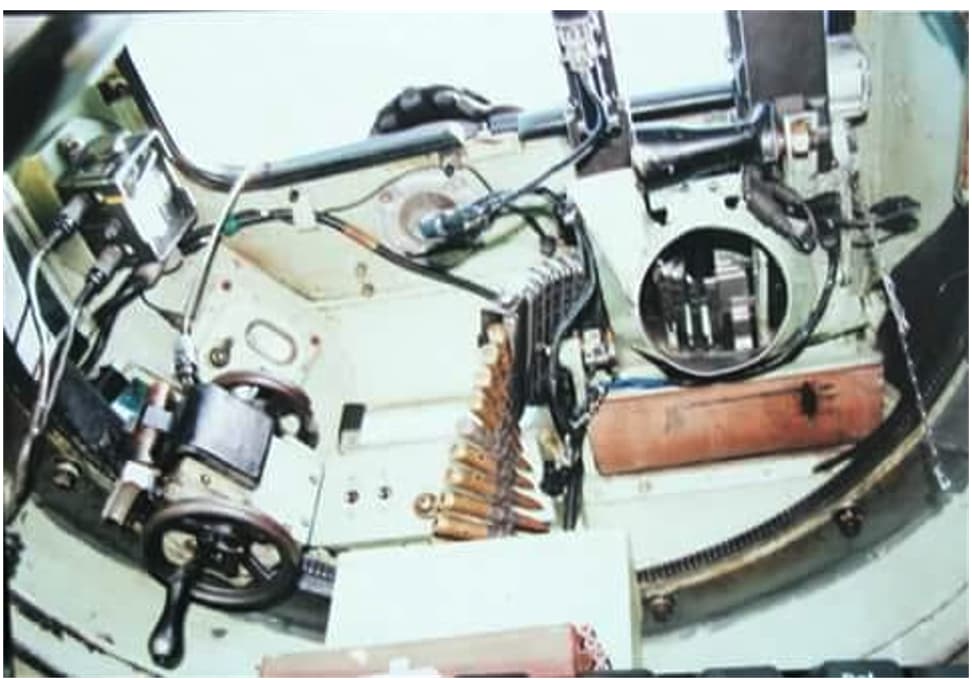 T50 Turret Fwd internal from below972×680 64.9 KB
Cocking & clearing needs to be done to, then the inconvenience of fitting in the necessary quishy operator.

One of the plus’s of the Churchill Crocodile was that it retained its main armament, so could fight even when the short lived & ranged flame was exhausted. You’d at least want to keep at least one MG in the turret, if you place the projector in the turret. Yes, a turret mount was possible - Pz III, Sherman, M67 are examples of that.
Re the drivers hatch, had a thought that a lift & pivot hatch would remove the need for hinges, though I don’t recall Brits doing that until Chieftain? 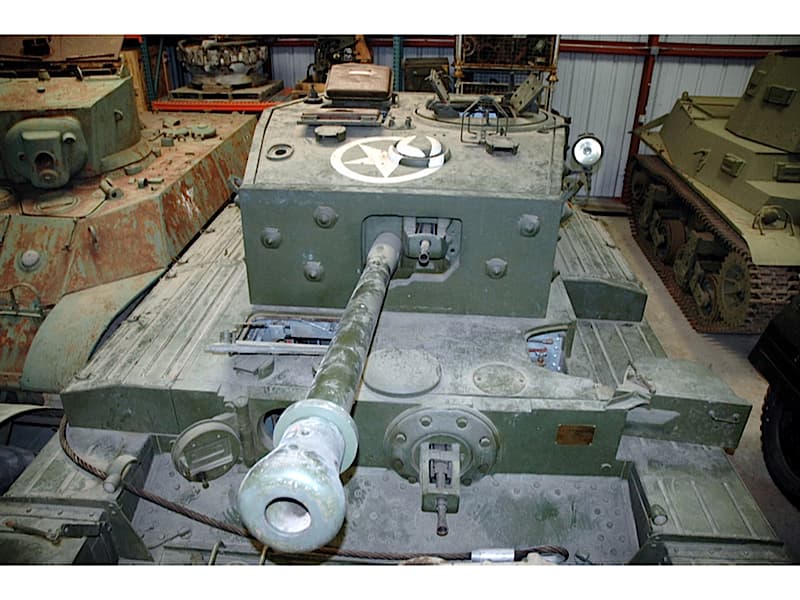 Maybe a sliding hatch? Designing a hatch isn’t exactly rocket science so maybe some engineer got a clever idea which was then tested before being used in post war designs?