A whole lot of “Inspirations” being posted and very few submissions by members. What’s up with that?
I’m guessing that members are slowing down their submissions due to it being summer (at least in the northern hemisphere)?
I’m hoping that member/modelers haven’t been intimidated by the influx of “pro” type models that are being posted and are hesitant to submit.
Although I love to see the “inspirations” themed postings, I would like to see some more of the ‘regular’ member submitted photos that we used to see in the feature section.
I don’t have any new builds to submit right now but I am thinking of resurrecting some of my submissions that appeared on the old site until I finish something new. Would that be acceptable?

I got the impression that the features on the Armorama page were selected and done by the editors, and we peons didn’t have the power to put up our own work. Am I wrong?

Anyone can submit content; features, reviews, etc… Go to the main page for each site (you will need to make a different log-in) and click on the Create button in the upper right corner. This will open the on-line submission form. Once submitted, an editor will review it for errors and then post it to the appropriate area. 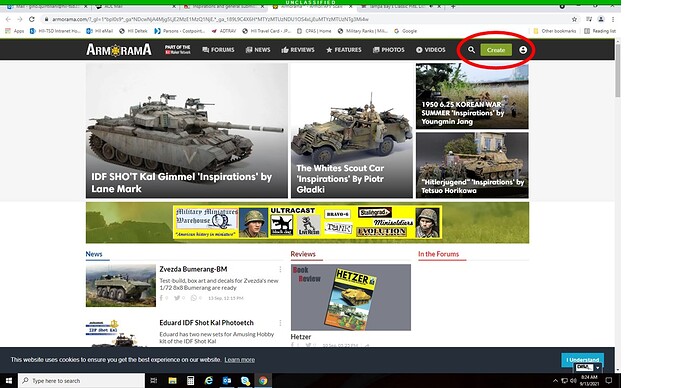 Could it be that when a forum “leader” belittles a feature, its author (and other members, web surfers, and ad readers) might find that to be less than inspiring? I know I do.

“a forum “leader” belittles a feature” Has this actually happened? I admit that I only view the features that appeal to me but I can’t recall seeing where someone affiliated with the site (editor, moderator) has posted any derogatory remarks about a posted feature. If it has happened shame on them and the site owner should address them.

I made the original post here because it appeared to me that the photo feature section was being overtaken by “inspiration” postings of non-member models/dios. When the ‘inspiration’ postings first appeared they were interspersed with member posted features. When I started this thread, the last fourteen or so features in a row posted were non-member ‘inspirations’.
My concern and question was why does it appear no members are posting (or at least posting on a far lesser scale than before) their models/dios?? Is it due to the “summer slow down” (which only accounts for the northern hemisphere) or is the membership intimidated by the quality and influx of models being posted as ‘inspirations’?
Don’t take any of this wrong, I love the posted “inspirations”, they are awesome models by very talented people. It was the seemingly sudden balance change of non-member models features vs member model features that caused me to question.

I’m pretty sure what has gotten Rob’s panties in a wad is my recent response below. I don’t think it is belittling to anyone or anything. Just not my cup of tea. Other opinions may vary.

I actually did read that one. I didn’t perceive it to be offensive but maybe because I share the same sentiments concerning the " hot chicks in uniforms around tanks" trend.
I actually don’t know enough about that war to determine whether or not Chinese/Vietnamese women soldiers were used in a scouting capacity.
Cheers,
C.

Yup. True leadership there. My panties are certainly not as much in a wad as the wad you get in your panties when you make such replies. I’ve got a pretty thick skin. But imagine those who don’t. They pour their hearts into their project, only to read negative comments from the “leadership.” I thought we were all here to inspire one another. Maybe this is becoming the wrong forum for that.

Still disagree with you that my comment is so hurtful. Sorry that you think all we should do is give “atta boys”. Like I have said before, opinions will vary and last time I checked, we are still authorized to each have our own.