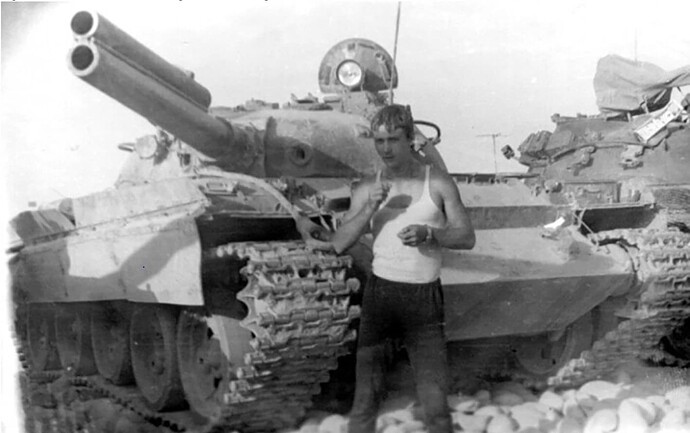 That would be my guess on the photo

Well it might be photoshopped but could it also be some sort of zeroing aid or something else related to the aiming/gunnery equipment?

Looks like the barrel is hinged upwards to me……

This is not a montage, but reality and humor. I quote from the Panzer35 : “*From an entertainment site:In fact, the second barrel is welded tightly, and you can’t fold it, as well as shoot from the remaining stub. The barrel of the tank was pierced by an RPG, there was no other damage. While military logistics ensured the delivery of a new barrel (it took several months), the damaged part was sawn off and welded on in this form, exclusively for luzls and demobilization albums.”

Soldiers can always be trusted with coming up with silly things

The welded on piece was to keep the original weight so as to maintain the proper balance between barrel and breach.

Why would maintaining balance be necessary if the gun waa non-functional? That would only matter if it was necessary to change the gun’s elevation regularly. Simply leaving the damaged gun alone would give a balanced, worthless weapon, if that was the goal.

Also, if you do the physics this arrangement will NOT maintain the balance of the mount.

I read that this was done to keep the tank in use for convoy escort. For this application, the coaxial machine-gun was considered far more useful than the main gun. As the machine-gun was slaved to the main armament, it was necessary to restore (more or less) the barrel to keep the stabilization system working properly. As noted, the fix wasn´t perfect because the balance point was still altered, but it was deemed good enough to continue using the secondary weapon, that after all, is more of an area weapon and thus doesn´t need to be stabilized as finely as the main gun.

They could put the gun in travel lock (above the breach) if they intended not to use any weapons… It is still missing the weight of the bore evacuator and the missing damaged cut out piece. I suspect it is still possible to fire the main gun at short range targets as the ballistics would be off due to the short tube. It may be a 500 meter weapon. That would be OK for convoy duty. It would be pretty easy to adjust HE fire at 500 meters.

Was probably used more for physical/psychological purposes to start with so having any tank along adds “protection”, a new barrel design would probably give a double take.

I would be interested in the photo details where, when, unit etc and which 1/35 would be correct to minus the barrel modification of course.

I suspect it is still possible to fire the main gun at short range targets as the ballistics would be off due to the short tube. It may be a 500 meter weapon.

I have a different theory recently borne out by my experience hand loading ammunition for my different Sig P320’s:

I have to produce different rounds with different powder weighs to allow for differences in slides and barrels, and in one case a compensator.
I submit that the T-62 barrel was damaged, and the forward portion had to be cut off.
As TopSmith points out, it could still fire but would be missing quite a bit of it original mass. A full charge fired out of a gun missing close to half of its mass would wreak havoc on the trunnions, possibly catastrophically. Welding a portion of the damaged barrel back on until a replacement barrel arrives would bring it close to its original mass.
Similar to what Cesar said, but for different reasons.
I don’t for a moment believe it was done just for laughs.