Is this a valid product? 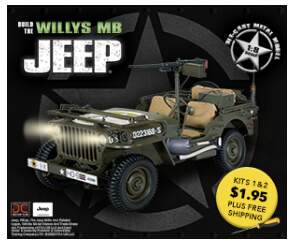 shows an appealing product but it seems to be a bit of a scam as well.

You get some parts of a willys for only 2 dollars, but each following set of parts is costing you +/- 14 dollars without any mentioning how many sets there are. Could become a really expensive joke this way

@staff_Jim is building one but it’s been awhile since his last post on the project as I recall.

Something like this comes along every couple of years. There was a Millennium Falcon a while ago that ran into thousands. They always give the bare minimum of parts and rarely in any kind of logical order to keep you buying and costs up.

Exactly what I thought their “strategy” is, and they justify the price of each package by adding books and other stuff that don’t add to the model.

We’ve seen all sorts here. Titanic, Bismarck, a Tiger Tank, Ecto-1, BTTF DeLorean. And the worst of all a large scale RC Spitfire they sold as a beginner flyers model. Complete with retractable undercarriage and I believe a 2-stroke petrol engine iirc.
The radio gear they tried to sell with it was a substandard Chinese set that was found to be unreliable and operated on a toy RC frequency and prone to interference. I wonder how many were actually finished and ended up in a smoking crater on the first flight?

It is a valid product just as lots of other garbage products are valid. Product = item that can be manufactured/produced and sold on a market.

It is not a good purchase from the customers point of view but
it is probably a very clever product from the sellers point of view.
If I wanted (another) model of a jeep there are a few kits to choose from, for a lot less money than this “subscription”

Lol… sorry if I think this is a bit funny. But I am just thinking about how much a 1/16 Tamiya or 1/6 Dragon plastic kit goes for.

It’s die cast. Die cast kits are pricey. Especially 1/8 scale kits. As for being a ‘scam’ they send you the first two kits for basically the cost of shipping, and with those samples you can make up your mind or not as to whether you want to keep getting them.

I have more to do. But been a bit busy with the archiving project.

One scam model is tricking people into buying something without them having any idea what it will finally cost.

When I would buy a 1/16 Tamiya or 1/6 Dragon plastic kit I would see the full price advertised.

Same here…Here’s an example with the 1/200th scale Bismarck.

We had a similar scam with books in Belgium. One started with an offer to good to refuse without being aware that buying the first offer made you a “member” of a “club” that would send you a new book every month.

And even when you signed out the books kept coming, and increasingly treathening letters of all the awfull legal things they would do to you if you stopped paying…

Luckily, this has become illegal here but people still get caught by international similar scams.

Crikey!
By comparison my LHS had the Trumpeter 1/200 HMS Rodney a year or so ago for less than £200. Still a big chunk of change, but a lot less and more convenient. Unfortunately, they do prey on the members of the public who don’t know that such an option exists.

Saying that, I think they do offer some interesting stuff and in scales the kit manufacturers just wouldn’t touch.
Models like the DeLorean, Ecto-1 and Bond DB-5 would have been great to have. I just have a mortgage and other things to pay for!

If you watched any of my videos I go over all that and talk about the final cost of doing it. This is not something typical modelers would do obviously. But this die cast offerings by Eaglemoss are pretty popular with die cast collectors. They would probably chuckle at the 100-1000 kits we have in our collections and call that a waste.