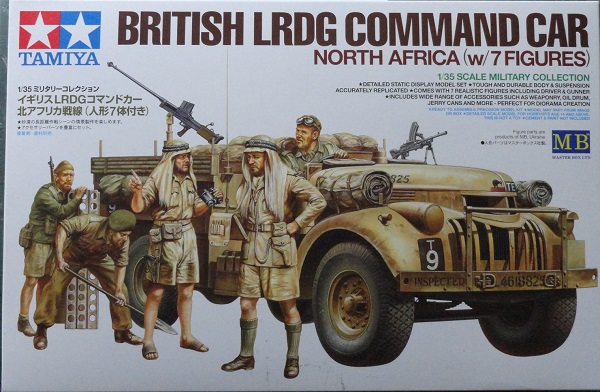 first time for me with this kit, never made it in the 70’s with the original packaging, so here goes, a chance to make it with new figures included in the kit. 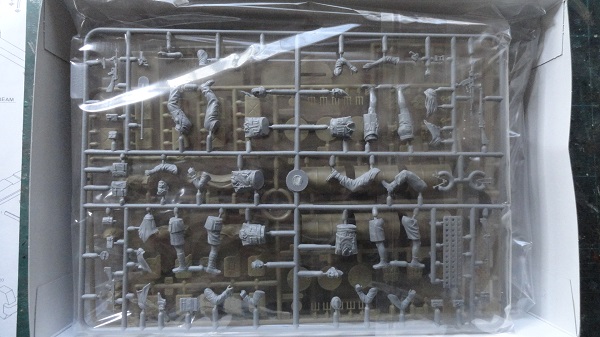 Masterbox and Tamiya have partnered up for this combined product, old and new together to give an old favourite a new lease of life.
the Eduard PE detail set arrived for it today, so lets see how that goes on. 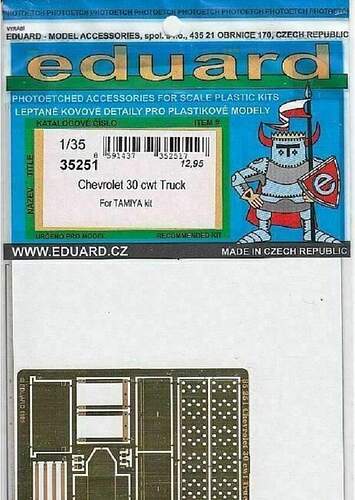 the kit also includes some decent jerrycans, both German and US type, they look quite good so I’ll see how they go together before I have to purchase an aftermarket set, maybe not. 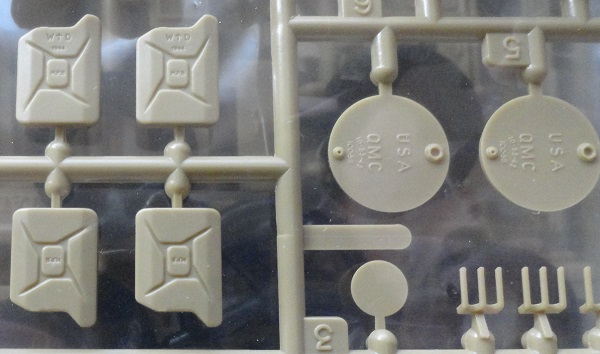 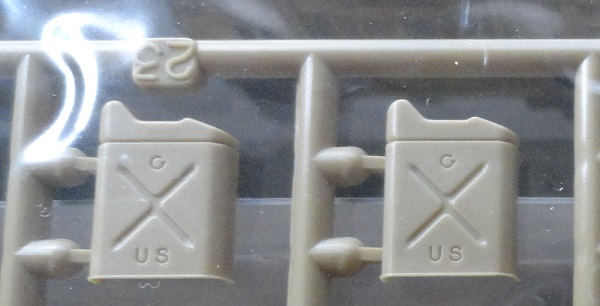 the only negative thing is that Tamiya haven’t updated the instruction sheet, it’s still the old one, a bit lazy. no reference at all for the new figures. 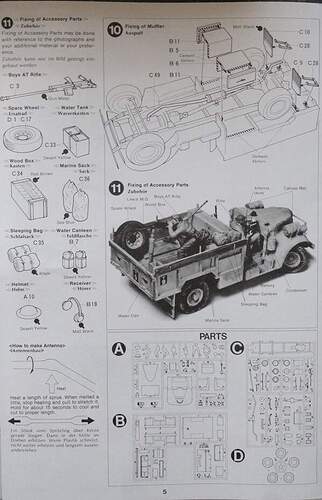 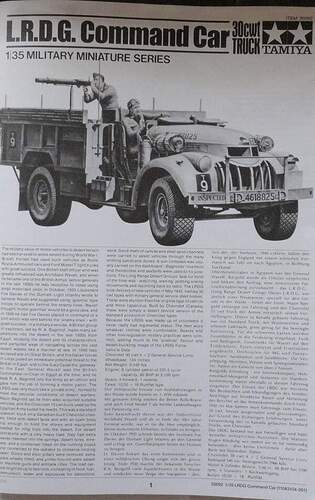 first steps, building the chassis, sanding off the mold lines, that are on everything, but the usual Tamiya molding quality, zero flash, and good registration between mold halves. 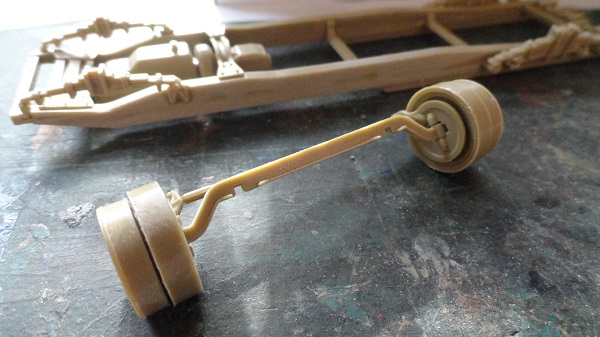 the kit includes rubber tyres! why, it’s a new issue kit, Have Tamiya gone all Revell? I’ll try them out to see if they look ok. 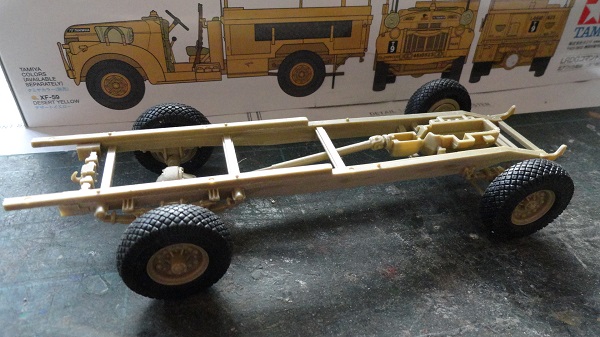 the pe set provides a replacement spring fender, the original being too thick. 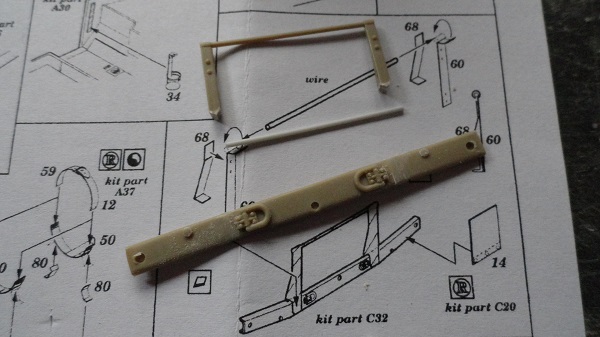 the old one needs cutting and sanding off, and a stretched sprue bar produced to the same gauge as the original.
The end result is satisfyingly fine, here it is in grey primer. Need to rotate the cut off flat spots to hide them 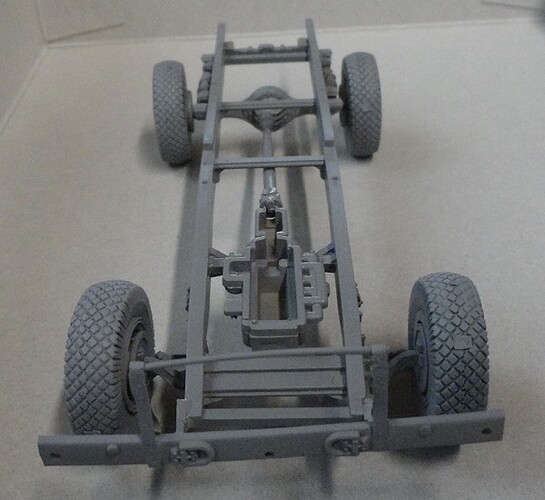 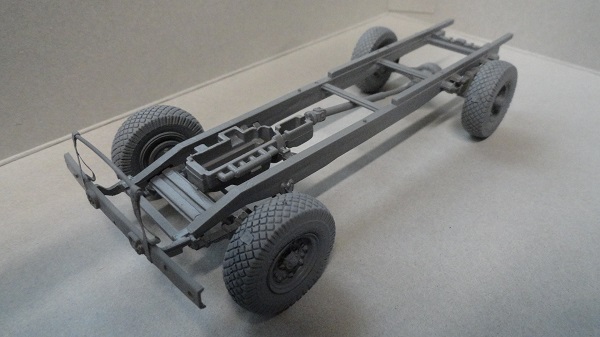 Fantastic choice! One of my favourite kits. Built one years ago and have this boxing in the stash.

I would take the box art with a pinch of salt. The LRDG were not big fans of the Bren gun, the slow rate of fire and issues with them jamming with dust and sand, so they would almost certainly never be seen. I would go with the kits original Lewis, which was the preferred weapon. The Boys was well liked for its accuracy and stopping power. At least against soft-skin vehicles they would usually encounter in the early stages of the desert war. Later vehicles could have had Vickers K’s, Vickers HMG’s or even Browning 303’s salvaged from downed aircraft. Researching LRDG trucks is a fascinating subject!

The jerrycans in the set are the late-war British copies of the German cans. If you look closely they have the War Department stamping and broad arrow. Almost identical to the original German WH stampings! For years I thought they were German until I clocked it on original can. Not much use on the LRDG truck, but bound to be useful on a project somewhere down the line.
Hope it helps.

to make it accurate, you really need to beef up all the storage as they carried a lot of gear.

Yes! To the point where some looked like a mound of crates and tarps on wheels!

@phantom_phanatic yeah and don’t forget about the greedy boards on the side of the vehicle.

Always loved that classic Tamiya kit. I think I have to get one……after selling about 50 of the 100 kits I’m trying to purge out of my stash to a local hobby shop and telling my wife no more purchases lol.

During my final term in what was then called Junior Leaders, we were shipped around to see all the trades in action that the then Royal Army Ordnance Corps encompassed; amongst such professions as butcher, tailor, vehicle specialist et al, was that of Petroleum Operator, involving a trip to the respective depot at West Moors, near Bournemouth; I was somewhat surprised to see that they had a jerrican museum!

yes, some interesting points you make about the cans, things must have changed from month to month as manufacturing hastened to keep up with the needs around the globe. I’ve always had the Impression they were the workhorse of Britain’s special forces, heading out to re-supply hidden fuel and water dumps.
Then, empty, apart from what they’d need for the hazardous return
Journey, via a different route, to avoid ambush, they’d return to base, or go on an O.P. Their lessons providing the bedrock of future operations.

the cab with some PE mounts for the small windscreens 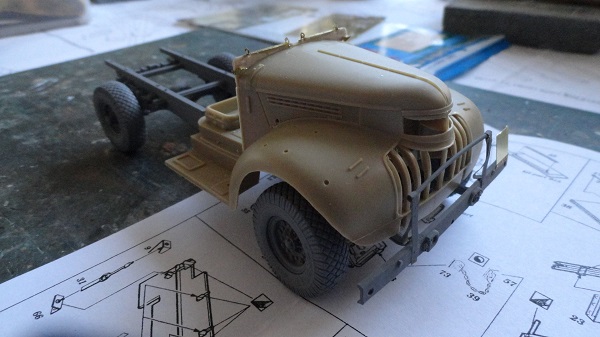 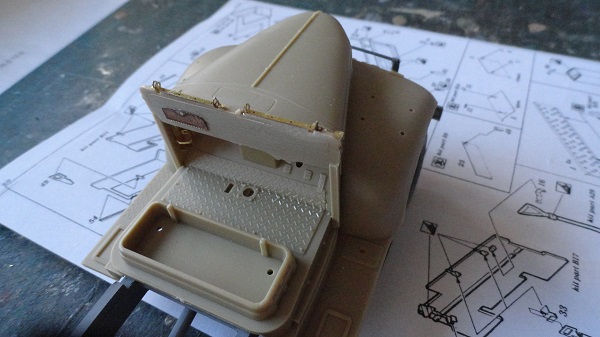 That would be an interesting, if specialist museum, the Jerrycan was a major contribution to operations in the desert, where supply is key.

The small parts, so far, the hemispherical windscreens, made from two frames sandwiching a marked out piece of clear glazing provided by ed. The dash instrument facia and dial film 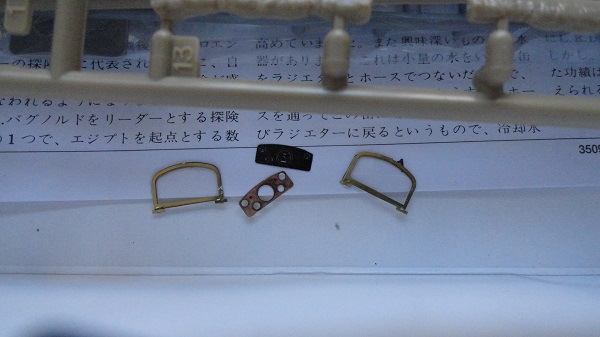 Old kit, but it’s never get old (at least not until somebody does a state-of-the-art new one).

thank you, very interesting, I’ll spend some time looking that up. Thanks for the heads up on it.

the cab back filled and sanded and ready for primer. 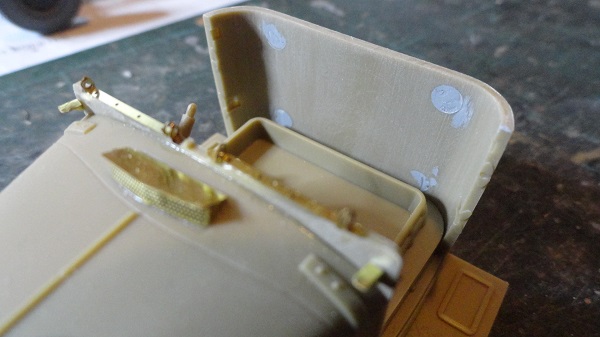 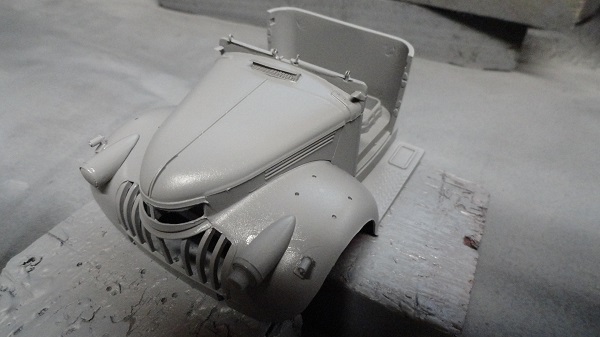 The weird thing is, I can imagine that would be a wealth of information for us modelers!

Each troop had a radio truck, with No. 11 radio set, but they were not all radio equipped. 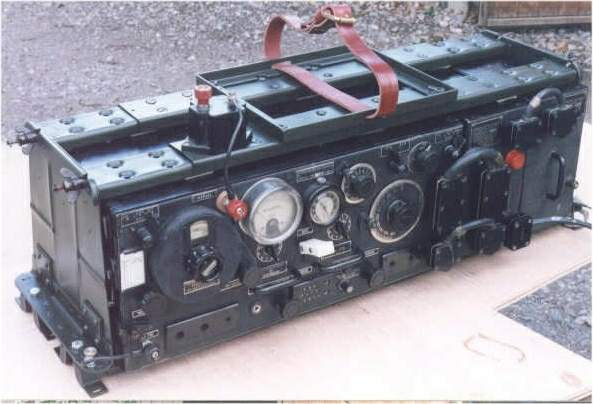 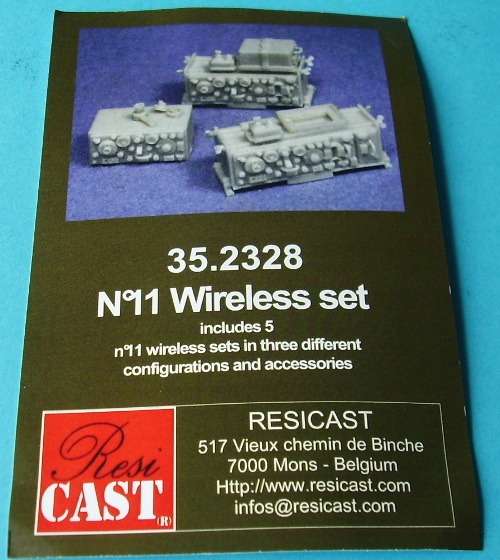 Alan McNeilly takes a look at the No.11 Wireless Set from Resicast, a set of five resin transceivers in 1/35.

This site may also interest you:
http://www.lrdg.org/

Happy to help, I’m not quite sure when exactly the British cans started appearing. They do seem to be more common post-44 though.
You’ll also need plenty of the older flimsies and POW cans. I think Miniart do a set with decals for period petroleum companies which would add a splash of colour.

I know! At the time it just seemed, well, a tad bizarre to my what? 16/17 year-old eyes. We continued our trips out and about though I can’t remember much beyond the Army’s abattoir at Aldershot ( a bit grim folks) and visiting the Central Vehicle Depot at Ashchurch where upon being invited to drive, I promptly put a Ferret Scout Car into a ditch.

You’ll also need plenty of the older flimsies and POW cans. I think Miniart do a set with decals for period petroleum companies which would add a splash of colour.

The Flimsies, were too flimsy to handle the conditions of travelling over the rocky terrain - their seams split too often and they were easily compressed by equipment on top of them. For this reason flimsies were transported as pairs in a wooden crate (later plywood and cardboard which were not successful) - a fact often missed by modellers. This helped, but did not solve the splitting issues.

The Flimsies were ditched by LRDG when a large supply of ex-German Jerry cans became available after the retaking of Benghazi in 1941. Italian Jerry cans were also used when captured.

Here you can just see two flimsies in a crate in the rear of a Chevy: 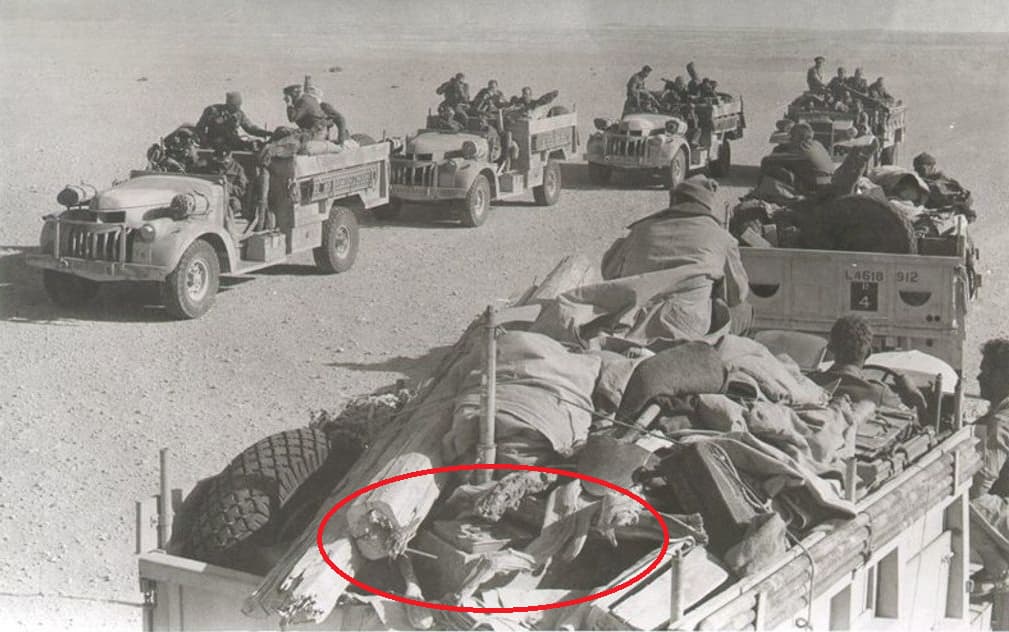 Note also the jerry can on its side just to the right of the red oval.

BTW, this is the troop radio truck, see the side hatch on the far right of the pic.