I’m looking for a bit of help here. I’ve recently built Tamiya’s 1:48 VW Type 82E Beetle and I’m trying to find any evidence that the Luftwaffe used them as run-arounds or staff cars so that I can sit it in an airfield vignette with at least half a nod to historical accuracy. 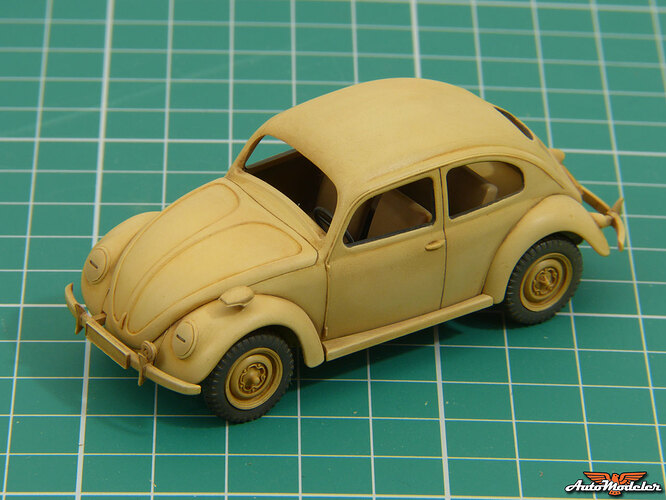 So far, I haven’t managed to find a single photo of a WWII Beetle with a Luftwaffe licence plate…

As an aside, I’ve build this as an entry for our tribute build for Steffen Arndt, a long-time friend and supporter of Kitmaker who tragically died earlier this year. If anyone has a 1:48 AFV/Soft-skin project that they’d like to enter, please join in to build along: Steffen Arndt Memorial One True Scale Campaign

True - I could have done (and I did consider it) - but I’d have still been chasing a suitable registration number.

I’m convinced there must have been some Luftwaffe VWs, but I haven’t found a single photo to prove it so far.

but I’d have still been chasing a suitable registration number.

What about using the WL plates from the decal sheet ? 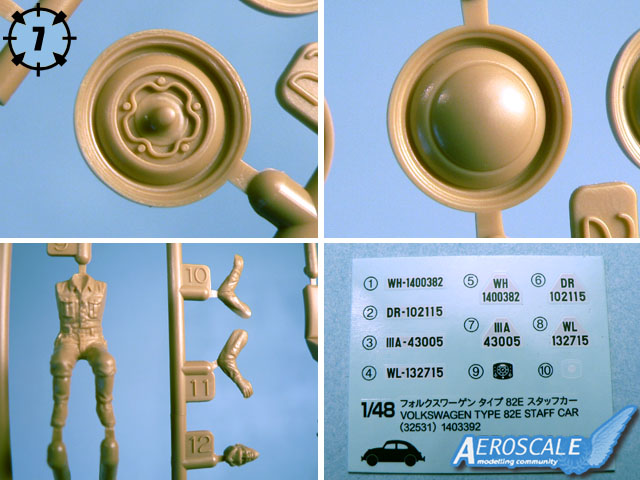 I did consider those, but I was hoping to find a military-spec Beetle used by the Luftwaffe. The other decal options are for the Wehrmacht and the Reich Traffic Administration.

Being primarily an aircraft modeller, I assumed the reason I couldn’t find any evidence was simply because I didn’t know the best archive(s) to search for a subject like this. But, maybe the Luftwaffe never used any Beetles?

I thought the registration plates were:
WH : Wehrmacht Heer
DR : Deutsche Reichsbahn
WL : Wehrmacht Luftwaffe
IIIA : a civilian registration for the land Württemberg,area Neckar (Neckarkreis) and more specifically Polizeidirektion Stuttgart Liste der deutschen Kfz-Kennzeichen (historisch) – Wikipedia
If you cut it down to IIA it would be Bayern and the city of Münich.
Both the civvy plates could be possible for a higher ranking pilots private vehicle

Sorry - I’m probably not making myself very clear. I can concoct a Luftwaffe-style registration OK, but I’m trying to find some evidence that it would be applicable to put it on a VW.

I’ve even been keeping an eye open for a Beetle in the background of Luftwaffe airfield shots while going through my references for other things but, so far, I haven’t spotted one. 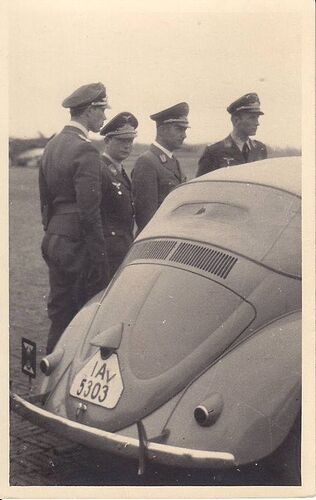 Ironically, I very nearly built the Beetle as a civilian car in the first place, but now I’ve got it basically finished as military-spec, I don’t really want to strip it all down to rebuild and repaint it.

That’s a first for me!

My mistake, I thought that the presence of a WL registration plate decal on the sheet meant that the instructions sheet also contained a finishing alternative for a Luftwaffe vehicle.
Now that I have checked the instructions I see that there is none such.

Could an Army officer have taken his Type 82E staff car over to the nearest Luftwaffe base to discuss tomorrows ground support missions?

Could an Army driver have been sent to pick up a Luftwaffe officer at the nearest usable field to bring him to the brigade/battalion staff area for urgent discussions?

Neat! I hadn’t thought of those as scenarios.

On a side note, I’ve just scrolled over this (very interesting) 100+ page long “Luftwaffe vehicles” thread on Axishistory.com

No Luftwaffe Typ 82E in sight…

FWIW, I checked my copy of Schiffer Pubs #114 “Keafer im Kriege” and couldn’t find any photos of wartime Beetles with LW markings.

Having said that, though, I also wouldn’t consider it the “last word” on the subject by any means. The book does lay out some production figures, but these are somewhat incomplete.

It does state that all of the ~620 Type 60 (standard civilian version of the Beetle) were delivered to either civilian government or party organizations.

It doesn’t provide any total production figures for the Type 82E (military version with the Kubelwagen suspension and drivetrain). Oddly, the book doesn’t have any photos of these in service except a couple with SS plates (and those are all technically Type 99SS). One other source gives total production of this model as 688 (but is not clear if that includes the Type 99SS models or not). Unfortunately, there’s no breakdown of deliveries to any of the regular military services (WM, LW, KM).

The Schiffer book goes on to say that ~575 of the Type 87 (4WD version with the Schwimmwagen drivetrain) were produced and the majority of those went to North Africa. No breakdown, though, on which services got them or how many.

As a matter of speculation, though, I’d find it hard to believe that the LW didn’t receive a fair number of the Type 82’s. Consider that the LW wasn’t just about aviation units, but that it also included the FJ and LW Field Divisions, too. LW procurements would almost certainly have established requirements for staff vehicles that these wartime Beetles would have been a good fit for.

Thank you both for digging into the archives about this.

I almost took it for granted that the Luftwaffe would have used the vehicle - it just seems a perfect fit for a cheap, reliable staff car and run-around - so it’s a real surprise that it’s so hard to find any evidence to confirm it.

The very low numbers produced I think accounts for how hard it is to find photos of them in military service. I also think the military services were happier with the Kubelwagen and Schwimmwagen and saw no real advantages to the cabriolet versions. I suspect that the few that were manufactured for the military were perceived more like “prototypes” or “test” vehicles that just didn’t justify the diversion of manufacturing resources from the “standard” Kubels and Schwimmers.

The civilian versions (Type 60) were valued more for their propaganda utility than anything else.

It would seem that less than 2000 of all types of the Kaefer were built with less than 1300 being made for the military. Given the circumstances and military situation, they no doubt disappeared into the whirlwind of war like a butterfly fart in a hurricane.

Still, I can’t help but suspect that there must be a photo or two of one or more of them in LW service.

Yep, I can’t help but think there must have been a few - but maybe there really weren’t.

Thanks again for checking the records to level of accuracy that I can’t match.

Goering received a Beetle as a gift from the VW factory, so there is that at least.

The infamous Jesse James has one he has been trying to sell for years as the same car Goering owned.

On the cabrio question, the Wehrmacht sure had a lot of cabrios for their officers - but perhaps the Kaefer was too small/dowdy in comparison to the big Mercedes and Horch machines?