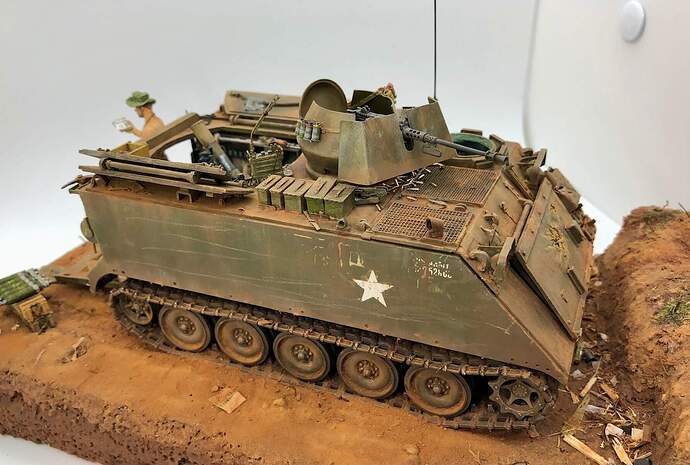 My Tamiya/Academy kit bash with a lot of scratch building. 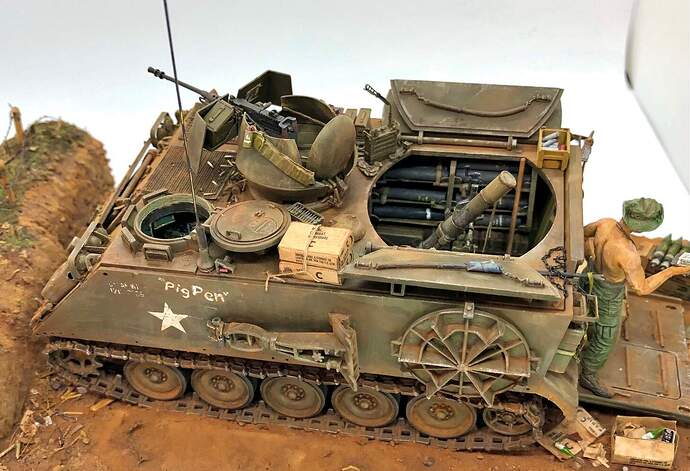 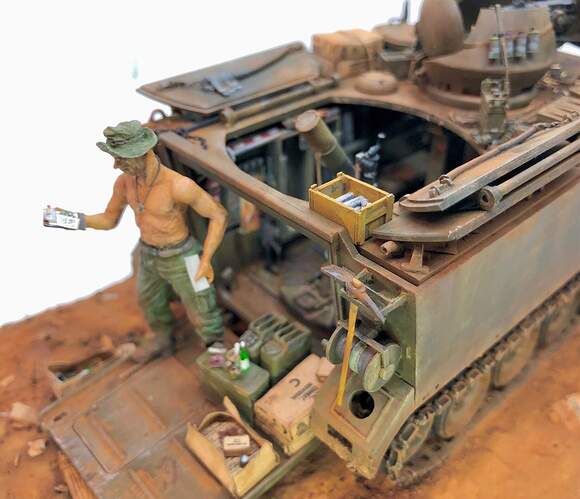 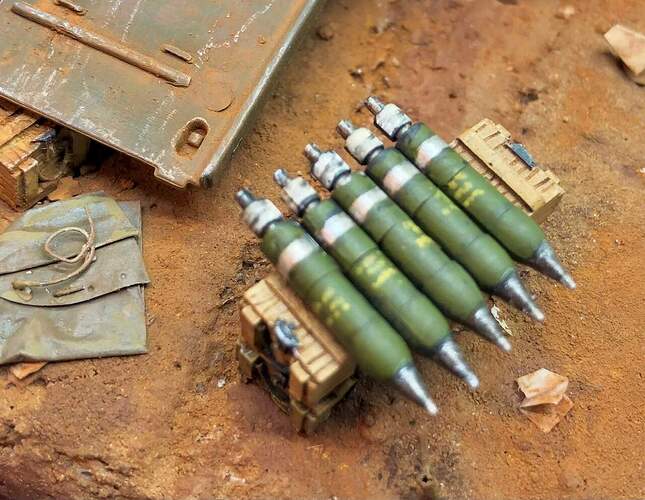 Robert that is stunning work there! So much detail and the finish is outstanding. Can you give us a brief run down of the build ? Amazing

Looks great. I agree, some in progress pics to show what you did would be great.

Model looks great but I’d really like to see and read about how you do ground work. This ground work base looks very real

Great model, great job !! Have you used any extras ??

Wow!! I think this is the best use of pigments I’ve ever seen. Astounding. . .

This just blows me away. Every detail is perfect. Your attention to detail is remarkable. This is exactly what the mortar tracks in my battalion looked like every time we passed through the lines and I saw them (they were still using these in the 90’s.) I can’t believe how many things there are to look at in this vignette - right down to the pieces of wax paper dunnage on the ground. The weathering on everything is incredible and you’ve populated the scene with so many finely painted objects that I could look at this for an hour. It’s a work of art. Well done sir!

Here are a few more pictures. Thank you for the very kind words. I appreciate it. Sorry I didn’t include much detail, but I injured my neck and back and meds kicked in when I posted.
I used parts of the interior of the Tamiya M106 kit, grafted to the Academy ACAV kit (better detail). Scratch built the ammo racks. Added lots of small details from the Verlinden book on the M113. It was the only decent source of interior pictures.
The groundwork is a styrofoam base covered with dirt from front yard and Elmer’s glue. I mixed AMMO Vietnam pigments with fine sand to fill in gaps and create different colors and textures. Then I used old style chalk pastels to “drybrush” the surface. 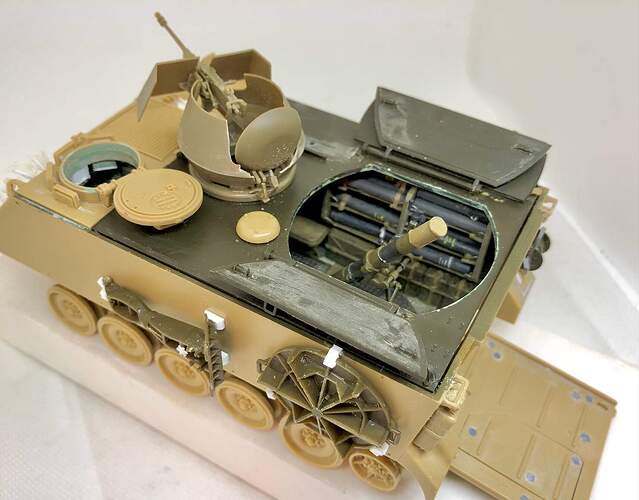 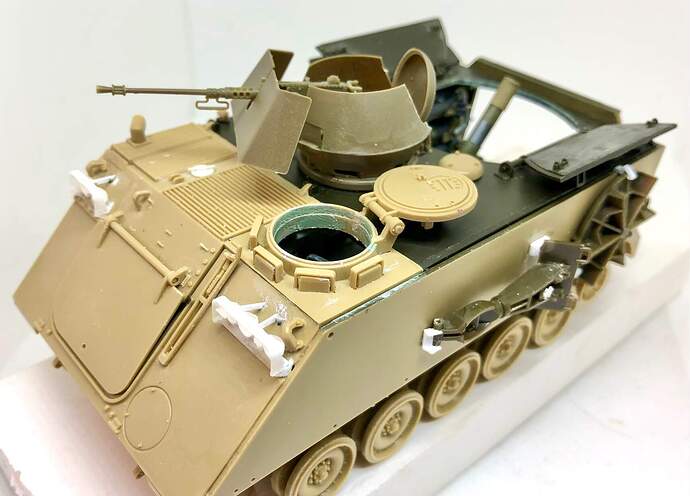 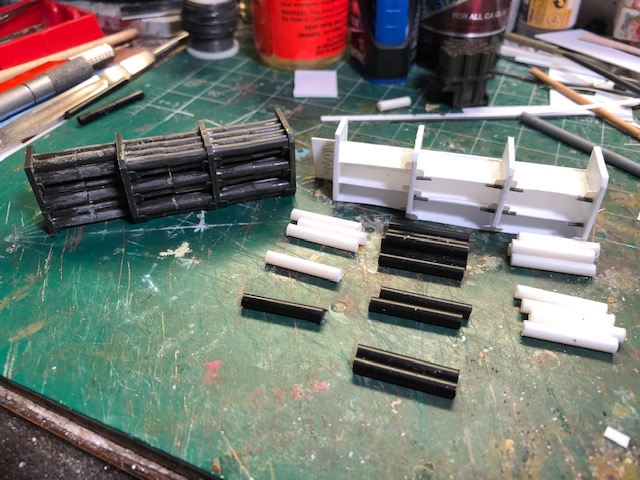 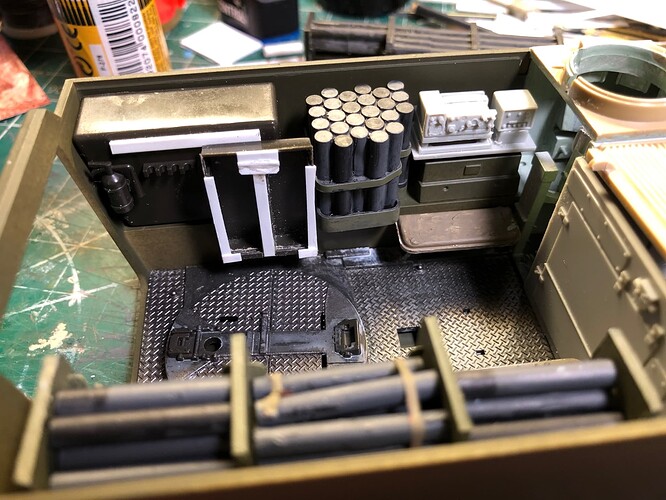 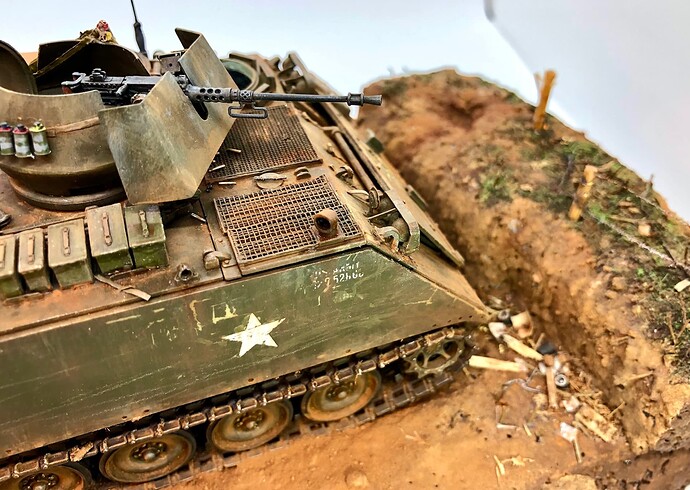 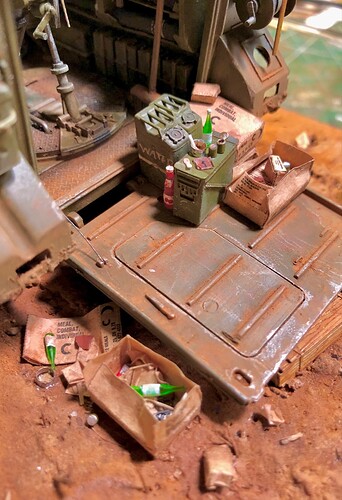 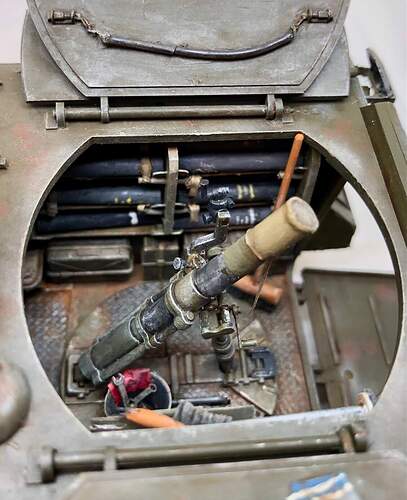 Thank you for sharing the 411. Once again… outstanding work!

Hope you have a strong recovery from your injuries.

Thank you for the information and photos - they will definitely be useful!

Very nicely done! Excellent construction and weathering. The small details and trash by the ramp are great.

just a step beyond excellent! Sir!

A few units took the basic 4.2 mortar out of the track and replaced it with an 81mm tube and base plate. Actually made a lot of sense when you think about it as they shot line of sight 90% of the time. I can’t remember if it was a 105 brass case or maybe a cut off green bag powder tube (155mm) used to cove the muzzle of the tube. Rather common sight. I’ve seen op’s that involved an entire troop where they used two and three M106’s together in a triangle like formation. Then there would be another track loaded to the ceiling with ammo feeding them. Usually two mortar tracks and a third mortar track with the tube stored away so they could load it up with extra ammo. When they used all that ammo up, they reinstalled the tube.

I really liked what I seen in your build. Just looks the part. CAV units used a large juice can close to the fifty cal to help cool the barrel (filled with transmission oil [red in color]). They almost always had an M79 near the crows nest to be grabbed by somebody to spot targets for the TC. Plus the TC usually had his own favorite weapon within his hand reach

The M106 was considered a very prime target for the NVA, and they’d get an extra fish head in their rice with a hit. So you often see the RPG fence erected to keep everybody honest. Some units with the dozer blade on the front of a 48 would dig a trench to set the hull in a lower position. This helps to hide the flash from the muzzle. It’s too late now, but they used quite a few time fuses when setting up a night logger. About every fourth round was good old willie pete!
great build!
gary

A few units took the basic 4.2 mortar out of the track and replaced it with an 81mm tube and base plate.

No, it was an actual version fielded for lighter units, the M125 81mm mortar carrier.

your wrong! Two units come to light right away; the 1st of the 4th CAV in the rubber plantations, and the 1st of the 1st CAV, and at least two or three in the 17th CAV. The 11th CAV also did a few tracks so their CSMJ has told me. To the best of my knowledge there were no 81mm mortar carriers issued between Phu Bai and the II-Corp border. I’m sure some units got them, but a whole lot of them didn’t. Maybe if you had a time machine to take you back
glt

Again, what you have been told and/or saw in one area of Vietnam is not the full story, nor how it was done everywhere.

The units didn’t just swap them out using bailing wire and bubble gum. There was a conversion kit that could be ordered through supply. Once it was converted to 81mm, it was now an M125. So according to your recollection, there were quite a few M125s between Phu Bai and the II-Corp border.