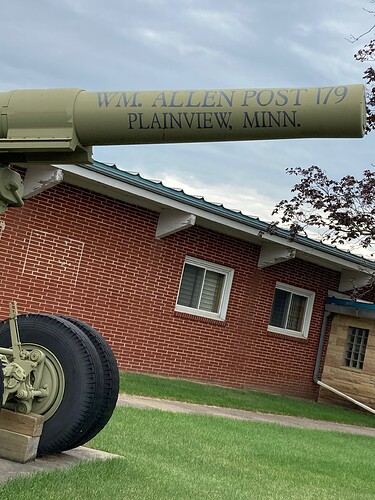 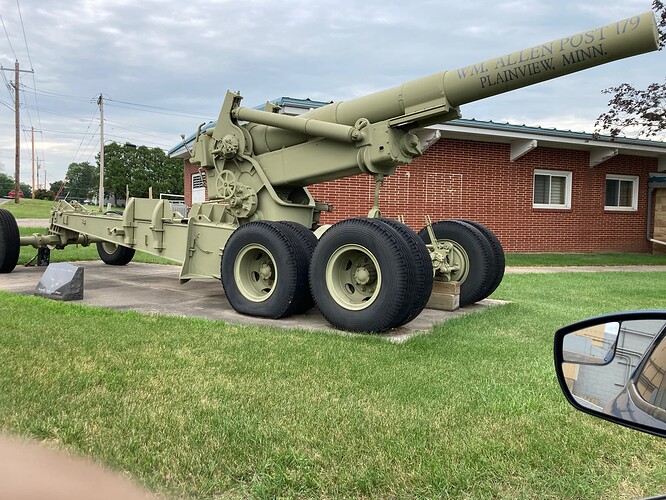 Brought back some long time memories.

THIRTY years ago, I was the Battalion XO of 4th Bn, 20th Field Artillery which was one of the last FA units in the USAR just before we were inactivated and all Combat Arms units, which were not in the Active Component, were allocated to the National Guard.

Wish I knew what happened to it, as it is LONG gone now.

Oddly enough when we and our sister battalions were inactivated, our higher HQ was also inactivated, however for some strange reason that unit was brought back into the Active Component. That HQ, the 428th FA Brigade, now still survives as the School Brigade at Fort Sill.

Were they 109’s? I modeled one from the Training Center circa 2000. I thought it might be the unit you mentioned but alas, the bumper code is not correct. 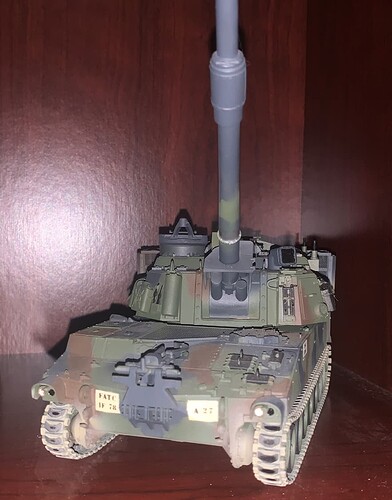 The Brits had these post war, eventually as nuclear artillery; they were mixed with Honest John forming at least 2 regiments (I think); I believe the original prime mover of the Mack, was eventually replaced by Leyland Martian tractors.

I have the AFV Club kit in my stash, but have very little idea what to do with it!

The 428th FA Brigade, as a USAR unit was located in South Bend Indiana, and had 3 or 4 USAR FA Battalions as I recall. I think we were all M110A2 8" SP units. When all the battalions inactivated, eventually the BDE HQ was also inactivated, however although the battalions were inactivated in about 1993, the Bde didn’t inactivate until 1996 for some reason. It was reactivated in 2006 and assigned as the school brigade at Fort Sill.

At the moment 1/78 is part of the Brigade with the mission of “AIT”. So it’s entirely possible that they are now (as they were when you did your model) equipped with the M109.

In a REAL twist of irony, another battalion currently assigned to the 428th FA Brigade at Fort Sill is the 2nd Battalion of the 2nd Field Artillery Regiment. According to the Wikipedia site they are responsible as the “Direct Support Field Artillery Battalion” which I believe means that THEY are the ones who are actually equipped with howitzers and fire all the missions for the students at Basic, AIT, OBC and the Captain’s Career Course. And they have the ceremonial “half section” as part of their duties.

So what’s the “irony”? In Germany I was assigned to the FIRST Battalion, 2nd Field Artillery (no longer active), and therefore wore the “donkey” DUI on my uniform. Twenty years later I was in the 4th Bn 20th FA and wore the patch of the 428th FA Brigade on my left sleeve.

And while there are hundreds of soldiers today who wear that DUI along with that patch, I’ll bet there are not many people who wore that DUI while assigned to the FIRST Battalion in Germany and the 428th FA Brigade patch while assigned as part of the USAR.

I don’t know if it shows well in the photo, but the model indeed depicts a Paladin from 1/78.

Yeah, it shows up pretty well in the photo. I’m wondering whether the organization is the same today. The higher HQ indicated here is “FATC” which I believe is Field Artillery Training Center. If this was modeled from around 2000, the 428th wouldn’t have been the parent unit yet.

Reading from the 428th’s website, it appears that 1/78 is for AIT, and 1/30 is for the OBC classes (brand new LT’s), the Career Course (Captains) and the Pre-Command Course for prospective Bn and Bde Commanders. As such, it may well be that neither Battalion has any actual guns.

The mission for 2/2 states that they deliver “fires and conducts logistics operations in support of the United States Army Field Artillery School” and that they have two batteries of M119A3 105mm howitzers to do that. It also states “Our Battalion is the only direct support light howitzer Battalion at Fort Sill”. What is unclear in all this is whether there are other units on post with larger caliber howitzers as well, either within the 428th FA Bde, or if there are other units on post not assigned to 428th which get tasked to provide fire.

But that was a LOOOONG time ago in a galaxy far far away!

when I was at Sill, we spent many days shooting 105’s for the OCS guys. Then went to track school and never shot for them again.

Yeah, according to the article on Wikipedia, the name was changed from the M1A1 to the M114A1 in 1962. The US Military went through a lot of nomenclature system changes around that time, and that’s when the M2A1 105mm howitzer became the M101A1.

The Navy also went through a significant nomenclature change in 1962 which drastically changed the way they designated their aircraft, adopting a system more in line with the one used by the USAF. Much of the changes had to do with Robert Macnamara’s tenure as SECDEF. He thought that the separate procurement of aircraft for the USAF and totally different ones for the Navy was wasteful and expensive, ultimately forcing the AF to accept both the F-4 and the A-7 from the Navy.

There is no question that certain requirements needed by Naval Aircraft, i.e. the ability to land an launch off a carrier deck as opposed to a 10,000 foot runway make certain differences inevitable, but generally the idea of commonizing military procurement across the services while accommodating specific requirements makes sense.

Since we have artillery gurus in this thread, I’ll ask here on this one as well: Any of you guys know the tradition of why we don’t leave soft caps on the ground?

Never heard of that one. I know that when in uniform out doors, provided that the uniform HAS head gear, that head gear is supposed to be worn. In garrison it would have been a soft cap, and in the field a helmet. The only uniform that didn’t prescribe a cover was the PT, but in the winter we would wear the black knit watch cap.

As far as not leaving soft caps on the ground I would guess that it’s more common sense than anything else. That way:

I never was in a stateside unit, and a lot of that stuff will vary from unit to unit. In the only unit I was ever in, you better have something ontop your head if you were out doors. I mostly wore a boonie hat, but it was also SOP that everybody had to have a steel pot on in the parapet when shooting. That order came down thru the division HQ. Yet when the sun went down and you were shooting; you often saw that concept ignored. I always wore the helmet. A piece of head gear on the ground while shooting will often end up being in a hunt for it afterwards. The blast can be kinda horrific at times.

The worst times to shoot was in the rain! Easy to drop stuff on your big toe! Can’t see well, and it ends up being like keystone cops. In real hard rain (often); your helmet (or whatever you were wearing) just gets in the way. You all would bust a gut laughing if you ever saw it in person. I’ve seen entire crews in their boxer shorts or worse yet.

In the end I must say that I never saw anykind of head gear on the ground. Helmets often stayed on the parapet wall or even ontop the gun. I’d kinda imagine that if Top saw your cap on the ground instead of on your head; he’d simply step on it! In my unit, they were death on the armed and covered rule when indoors.
gary

Interesting responses. The Army is different these days for sure. I took this photo two years ago doing M777 and M119 training. You don’t have to wear headgear at all unless on the gun. And you can see by the helmet on the ground that that is not a no-no either. There were helmets and assault packs lying around all over, along with a host of other items. No, it seems that the real issue lies with the soft cap itself. It goes back as far as a shoot I did at Fort Carson in 2010. So it’s been going on since at least then. I wondered if anyone knew of it prior to that. 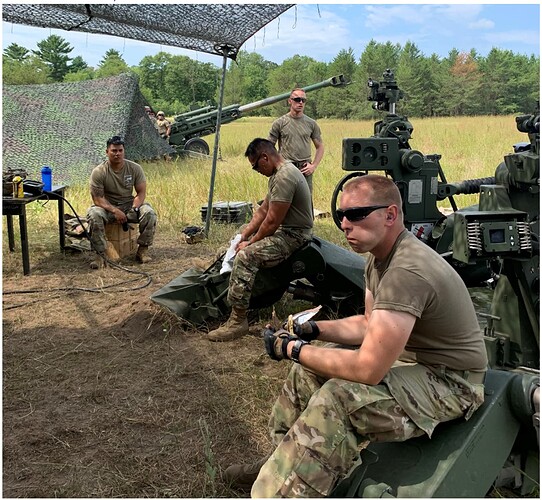 image1400×1290 275 KB
So the answer to my question is - the reason you don’t leave your soft cap on the ground is because this will happen to it. 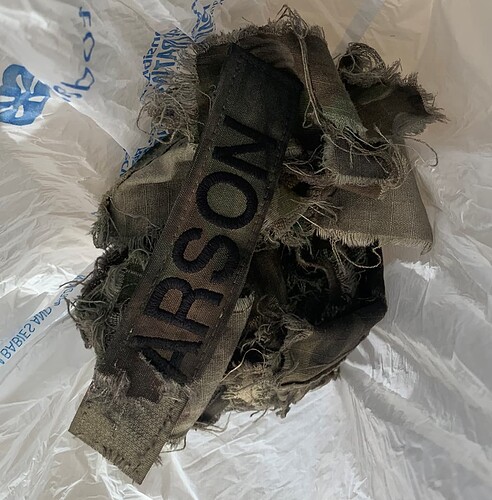 they look a lot healthier that we did in my days. We had rules set down by folks we rarely if ever saw. Yet for the most part they were good sound ideas. Watching them shoot 155’s on the tube, I see a much better equipped fighting force with somewhat minor changes (but significant to the users) that will make things easier.

The gun is OK, but has flaws in the design. There were some good ideas offset with some stupid ideas. Just moving the gunner’s station was a plus and a half! Looks like loading the round is made for somebody seven foot tall! Still you get used to it. The center axis position was a much needed revision!
gary

The Navy also went through a significant nomenclature change in 1962 which drastically changed the way they designated their aircraft, adopting a system more in line with the one used by the USAF. Much of the changes had to do with Robert Macnamara’s tenure as SECDEF. He thought that the separate procurement of aircraft for the USAF and totally different ones for the Navy was wasteful and expensive, ultimately forcing the AF to accept both the F-4 and the A-7 from the Navy.

There is no question that certain requirements needed by Naval Aircraft, i.e. the ability to land an launch off a carrier deck as opposed to a 10,000 foot runway make certain differences inevitable, but generally the idea of commonizing military procurement across the services while accommodating specific requirements makes sense.

People like to demonize McNamara but the services were buying plenty of aircraft that did not need to be carrier qualified and could be rationalized (e.g. transports, helicopters) but they showed no interest in working together to come up with designs that all could live with. The different designation systems were viewed as both a stubborn refusal to accept anything from another service and as deliberate attempts to hide identical aircraft under different labels to avoid scrutiny.

His pursuit of commonality was wrongheaded in cases, but it was pursued because the competing services frequently could not come up with supporting arguments that did not seem contrived or deliberately overstating the need for separate designs.