Hey all! I’ve had starts and fits with model building after I convinced myself that I would start again. And then things stopped for a solid few years! I’m gonna have another go and start where I left off with a build that should have been done by now. I am building Tamiya’s old M2 Bradley into an M3 IP/A1 which is what I served on as a scout in the 2nd Armored Cavalry Regiment, toward the end of Iron Curtain coming down, and prior to deploying to Desert Storm. While I’m not on the level as more experienced modelers on this forum, I’m doing this primarily for the fun of it and learning new techniques and not necessarily aiming for 100% accuracy.

For reference, I am going mainly off memory, so I might be a bit rusty. if you want to model a Bradley specific to the 2nd ACR - Bradleys in the 2nd ACR differed from M3A1’s in the 11th ACR. The turret bustle rack retained the forward slope on earlier M2’s and M3’s. Additionally, the smoke grenade stowage boxes on the front of the turret were replaced by two elongated rubber straps which were used to secure .50 cal ammunition boxes for the smoke grenades. The ammunition boxes for the smoke grenades were brown in color, with yellow stenciling.

We also did not have the internal drinking water tank that was mounted to the inner roof of the crew compartment. Firing ports for the M231 FPW’s in the crew ramp were deleted as were the left and right-hand firing ports on the sides of the Bradley. In our version, they were covered over with additional armor plate.

Periscopes for the scout crew were deleted on the right hand side of the crew compartment but were retained on the left hand side, behind the driver and just before the loader’s hatch for the TOW launcher. The loaders hatch was the newer type with four periscopes integrated into the hatch (which Tamiya never bothered re-creating; the only fairly correct one I’ve seen is from Meng’s M3A3 or Orochi’s). The seats for the scouts were stored in a CONEX and rarely ever used for border camp rotations, gunnery at Grafenwoehr, or fighting the OPFOR at CMTC Hohenfels.

SOP’s for stowage and unit marking usually followed USAREUR and regimental commander’s discretion. Camo netting was stowed on the front right of the trim vane, with the bag that held the support poles and spreaders on the rear right top. Spare road wheels were bolted to the brush guard that covered the antenna matching unit on the right of the turret, next to the Bradley commander’s hatch. Safety strobes (“whoopee lights”) were usually mounted to the top of the left rear brake light/sponson or on the bustle rack, directly aft of the other antenna matching unit (bolted onto an upside down L-shaped bracket). Metal chock blocks were painted yellow and strapped (or thrown) to the upper hull, near the pickaxe and spare track section stowage on the left hand side.

USAREUR also dictated that red and yellow safety reflectors (found in Tamiya’s M2A2/M2A2 ODS kit) were placed on the left and right hand sponson boxes, respectively, and two stripes of yellow reflective tape (like an = sign) affixed to the left and right forward and topmost section of armor plate above the skirts. As for tactical markings, the regiment used a marking system (similar to what the Israelis developed, IIRC) for vehicles, with different number and chevron orientations to denote the specific line squadron on “Battle Boards” and when painted on hull sides or aft ramps.

For 2nd Squadron specifically a simple “2” would be Headquarters Troop , 21 would be Eagle Troop, 22 would be Fox Troop, 23 would be Golf Troop, and 24 for Hawk Company (organic tank company) on Abrams battle boards. 25 would be for our Howitzer Battery IIRC. These numbers were usually painted with a really large stencil on the aft crew ramp for Bradleys. Each platoon had a smaller number on the hull sides of the Bradleys, 1 with no chevron was a headquarters platoon vehicle (such as an M577 or 4-Deuce Mortar Carrier). Upward chevron denoted first platoon, leftward chevron - 2nd Platoon, downward chevron - 3rd Platoon, rightward chevron - 4th Platoon.

I tried to attach a few photos but it appears I’m so new that I’m not permitted to currently do so. I hope to hear from the rest of the community! Any feedback is welcome and appreciated! Thanks!

Keep posting and reading post. In a few days you should be able to post your photos.

I assume from what you posted that you are planning on doing the interior. The hard part will be the TOW missile rack. There is a post here with references for several different Bradley versions, just look for that. And welcome aboard!
Ken

Hey there TankerKen - the M3 will have no interior. I’m actually thinking of using the interior from the M2 kit and grafting it into the Tamiya M2A2 to replicate the M2A2’s we received in place of the M3’s when we were in the desert. We stripped most of the infantry-specific seating and only kept the folding seat closest to the hell hole in the crew compartment and the seat closest to the ramp door. We also jerry-rigged a makeshift TOW rack where it should be on the M3, using long rubber and canvas cargo straps and ready boxes for the 25mm ammunition from TOW shipping crates. Toujours Pret! – Emil

Sounds like a great project. I have similar plans to do an M3A1 w/interior…eventually.

As Ken posted, there is a lot of great info at the thread he linked.

If you are looking for an M3A IP/A1 TOW loading hatch w/the periscopes, Meng sells individual sprues and it is the X sprue out of their M3A3 kit that contains it and the mounting hardware. Just contact their customer service and you can order the sprue.

Good luck and keep us posted. 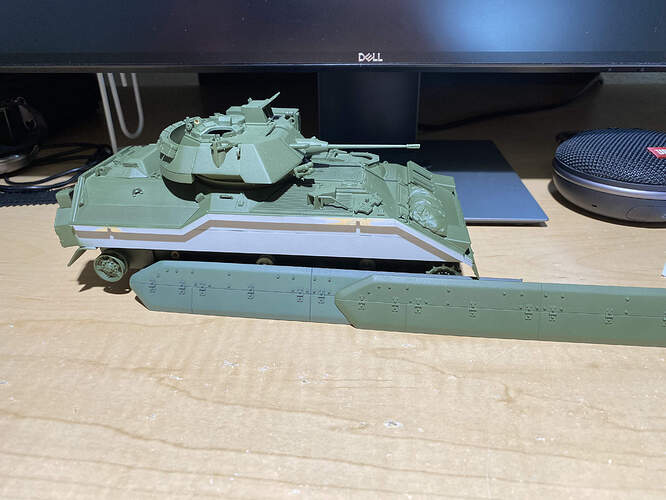 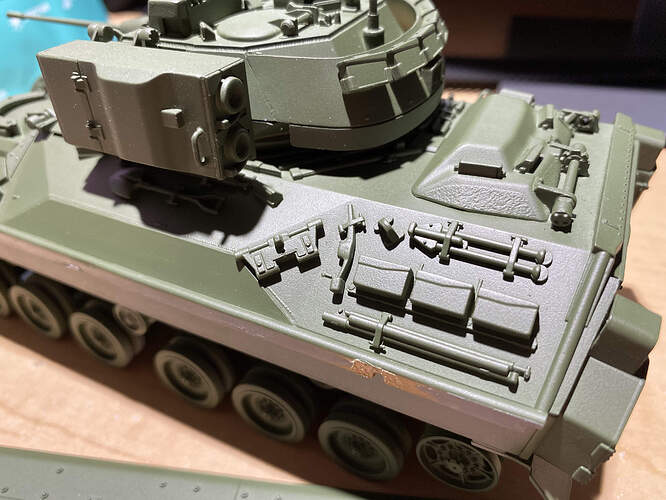 Some progress photos here. I’ve attempted to find the correct shade of overall green and was trying to simplify things by just using Tamiya TS sprays at first. The NATO green spray was way too “green” and as many have noted in various forums that this particular shade/hue used by the Bundeswehr. Side Note: I picked up an airbrush (Tamiya HG III Superfine) and decided to practice my hand at using one of these and for me this is a game changer! – I tried FS 34094 from Ammo/Mig FS 34097 and they appeared way too brown. I settled on XF-67 in the 10ml pot as it just looks more correct to my eyes.

Just some notes on the build itself:

I robbed my Meng M3A3 of its observer/TOW loader’s hatch to accurately portray an M3. Tamiya never changed this out when they were distinguishing between the M2 and M3 with their ancient kits (which this is and one of the first kits from them I purchased when I was a kid).

I also robbed a spare Tamiya M2A2 of the plate above the driver’s hatch and the antenna guard from the turret, next to the BC (Bradley Commander) hatch, as well as the aluminum fitting adjacent to the lower section of the rear ramp, close to where the hydraulic pump and lever is situated on the real thing. 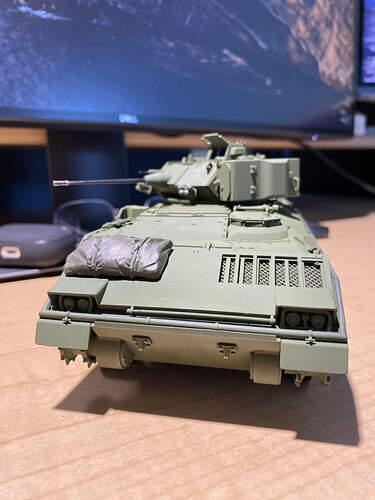 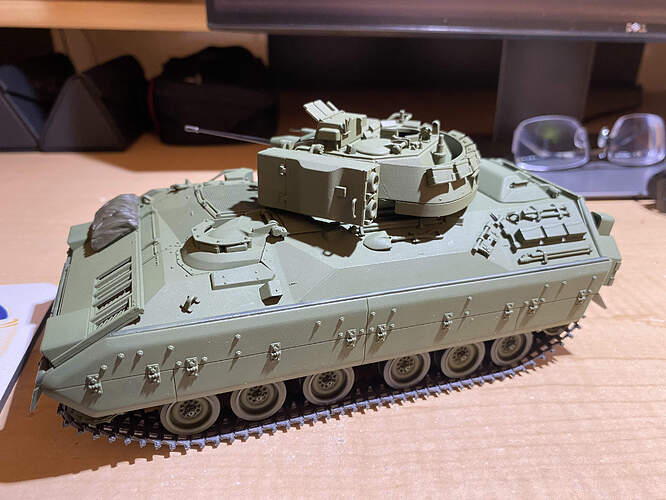 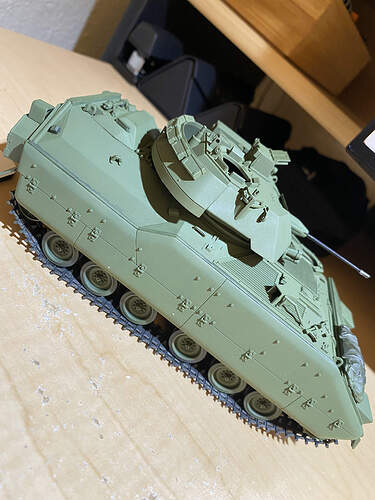 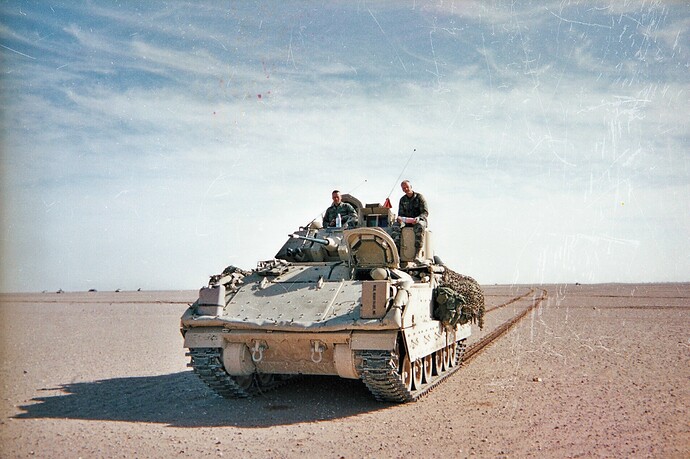 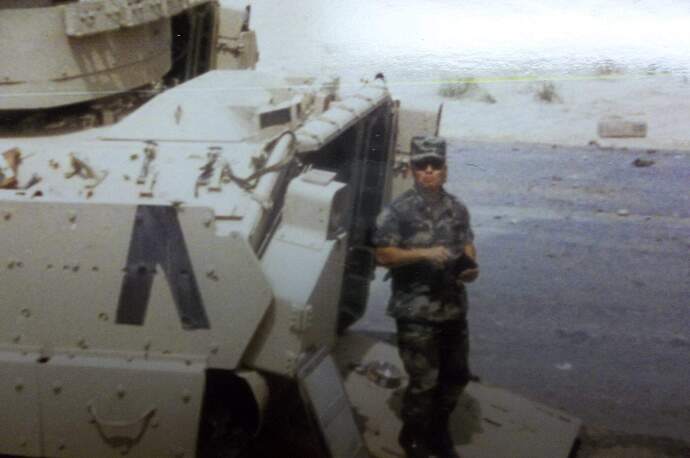 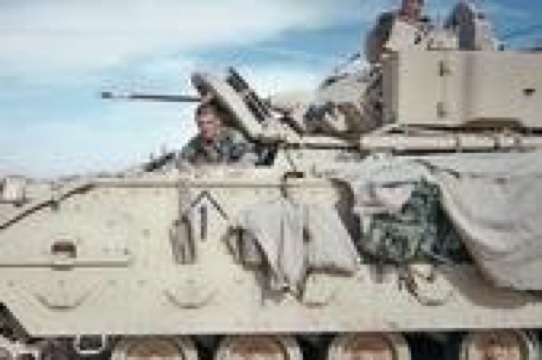 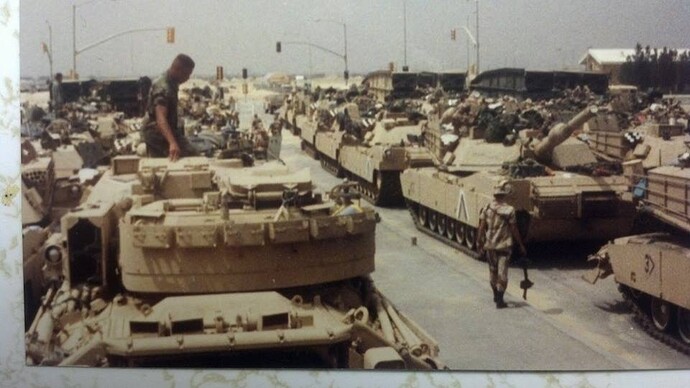 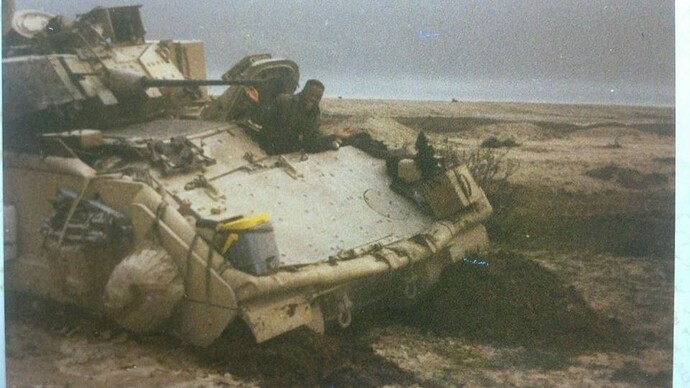 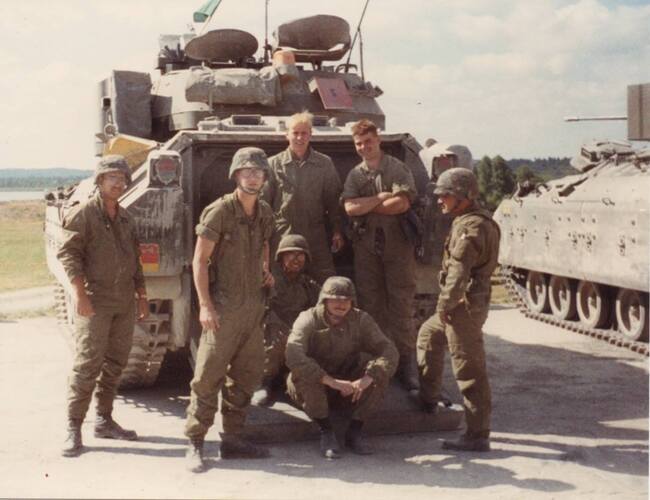 Added some more progress photos and some photos of Bradleys (some of which include yours truly and my cavalry brothers) from the 2nd ACR.

Looking good. The paint looks dead on. The conversion parts fit well too. The only change I would make would be to sand the anti-slip off the sides of the TOW reload hatch. It is the only place it is on the whole vehicle, where there should be none. Keep up the good work.

Ill be watching this for sure … Keep it rollin

don’t forget the holddown straps that were left on the turret front faces where the grenade boxes used to be. 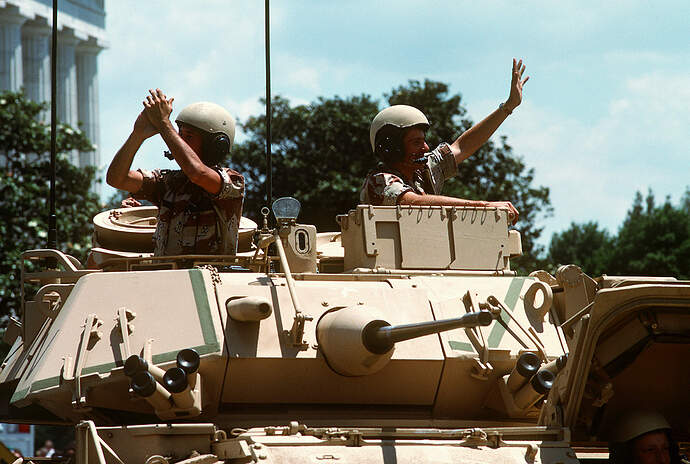 I was in Ghost, back when the Regiment was @ Ft Polk.