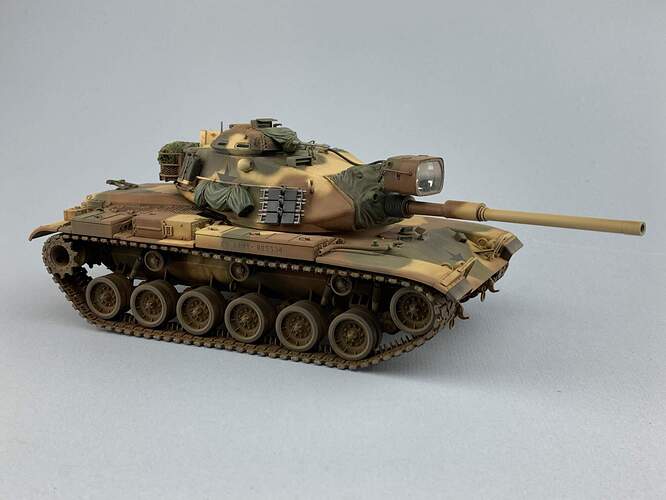 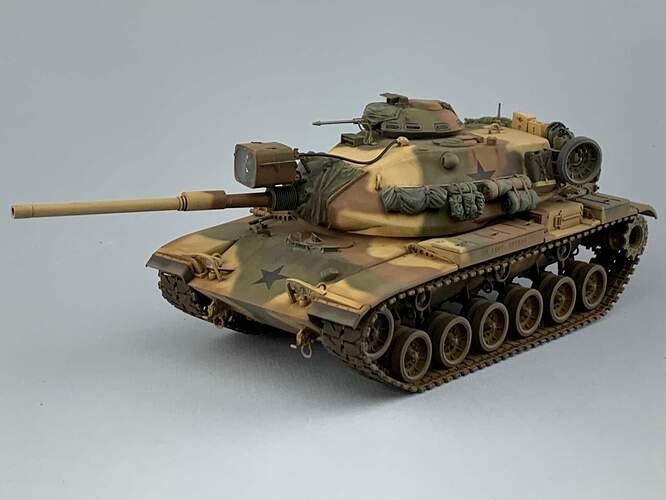 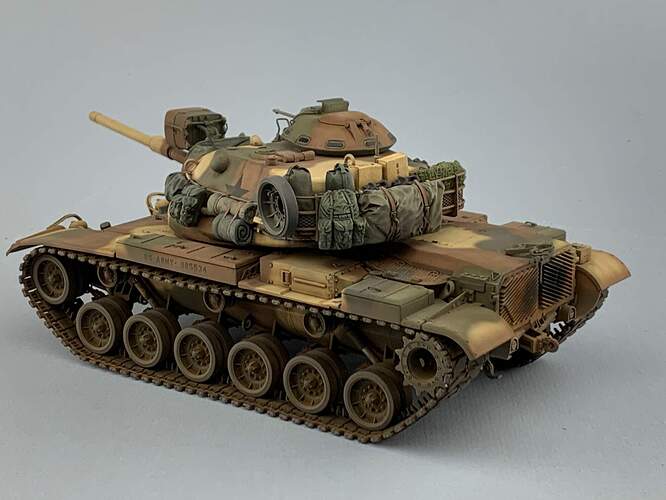 Excellent clean build and paint job! I especially like that you have not depicted it as a beat up and over weathered vehicle.
Cheers,

Looks nice. Good job on the MASSTER camo scheme and gear loadout. What kit is it?

Also, I changed the title so it is easier to find if someone searches for it.

What an excellent finish on the camo.

I love the '60 series tanks, your depiction of MASSTER is perfect! As said already this is a nice clean build and the gear, well I try but I haven’t reached your level of finish yet. Nice!

Thanks guys. I actually posted by accident before I could finish the description. Anyway, it’s the Takom M60A1 OOB except for the stowage. It was painted with custom mixed Tamiya and the cam was AB freehand. Weathering was achieved with an overall wash of raw umber oil and pin-wash. The dust was applied using a combination of AB and pigments.
Can’t take credit for the photos(I still use a flip phone). Friend of mine has a pro setup and he takes the pictures for me.

Gonna try to post some more of my stuff.

Outstanding job. I have that kit and can’t wait to get to building it. Don’t think I could finish it as good as yours lol

Excellent build! Care to make it a photo feature on the Content site? That way it can be found, rather than sinking below the waves of newer topics in the forums… It’s easy enough - use the “Create” button at top right of the Content web page and add the info, text, & pics.

That turned out very well! The paint job, markings, and the stowage all look just right.

Wow! Really nice job on the camo. I didn’t know much about MASSTER and I’m glad there are people who reproduced the pattern on their models. Well done!

I second the idea about making the model into a feature, it certainly deserves the recognition and Armorama homepage. Perhaps you would be inclined to add some text to the feature, explaining the painting & weathering process.

Very nice model indeed; just a point though - antennae? Just to give it that business-like look.

I don’t put antennas on most of my builds due to low shelves where I keep them. In the past I have drilled out the base so I can insert them but found that I usually forgot to take them out and they got broken or they simply got lost/misplaced.

Add antennas in the tied down position. That should deal with the overhead clearance situation.

(now where is that stirring the pot emoji?)

dear modeller, are you aware of that TAKOM made a nice model, BUT it has an incorrect turret for an early M60A1 MBT!

All M60A1 produced BEFORE 1974 had a turret with the so-called undercut. This topic had been discussed in depth, prior too, let me say two months ago!
In my opinion, the endeavor to keep the mold costs low lead to this fake turret! At the moment no plastic model has the early turret with the undercut.

I have the TAKOM M60A1 model too and in consequence, I faced the same problem.

BUT, help in the form of the U.S. Cavalry arrived and I received the message: “Salvation lies in South Korea!” There is a manufacturer of accessory kits called SOL MODELS.
SOL MODELS took over the molds from ADLER. ADLER, when the company of that name still existed, had an early M60A1 turret with the SAID undercut! And since SOL MODELS had taken over the molds, on the advice of General Buford, I got in touch with the company and ordered the early turret in September 2020! And after almost three months, just before Christmas, I was allowed to hold it in my hands! Emotions rocked me then!

Since the solution was now available in the form of the SOL MODEL “early turret”, I started building the TAKOM M60A1 yesterday, ANNO DOMINI, January 17, 2021.

TAKOM surprised me very pleasantly, as the two “large” lashing eyes that can be found on the late hull, see TAKOM’s M60A1 w ERA, have been replaced by the three small lashing eyes that are characteristic of the early hull! The sprocket with the three mudholes in the outer sprocket drum put me in awe! The driver’s hatch was changed too, as the early M60A1 used the infra-red driving device. It could be exchanged with a normal periscope,. Starting with the M60A1 (RISE) P, the infra-red devcie was ,replaced by a starlite scope, this in consequence required a different mounting in the drivers hatch. Sprue G part No. 63 is the later driver’s hatch. The correct one for an early M60A1 is at sprue S, part No. 21, and It’s a really nice one!

Tomorrow I’ll take pictures of the SOL Modell Early Turret and for comparision of the TAKOM turret, and I’ll show an easy way to clean the rims of the aluminum road wheels.

What bumper codes do you want to add?

I’ll assume. I’ll go with HAWK Company, 2nd 11th Armored Cavalry Regiment.
In the seventies I was with Panzerbataillon 354 at Hammelburg. Our official “Project Partnership Unit” was 3rd 64th Armor at Schweinfurt. But we kept close ties to H Co 2nd 11th Armored Cavalry Regiment in B-K too.
I don’t know. if you are familiar with the task org of the two ACR in USAREUR/ 7th Army, 2nd ACR and 14th ACR, that was re-flagged in 1972 to 11th ACR!
In the senventies, at regimental level were, Regt HQ and HQ Co, engineer company, MI copmpany, MMC

All M60A1 produced BEFORE 1974 had a turret with the so-called undercut. This topic had been discussed in depth, prior too, let me say two months ago!
In my opinion, the endeavor to keep the mold costs low lead to this fake turret! At the moment no plastic model has the early turret with the undercut.

The old Tamiya M60A1 kit has the early turret front cheeks. That area was uparmored after battlefield feedback from the Oct ‘73 Yom Kippur war indicated that this area was a weak spot in the armor.

No need to be so dramatic about “fake turrets”. Conceivably a M60A1 could have the new armor in the cheek area, and be in MASSTER camo. That scheme was in use for a few years past 1974.

My personal recollection of seeing 7th Army vehicles during my rotations through FRG was that the paint all had hard edges, appearing to have been either hand-brushed in their entirety or brush-outlined then sprayed. No soft edges similar to the MERDC (except those pesky sand and black portions). MASSTER appeared like this: 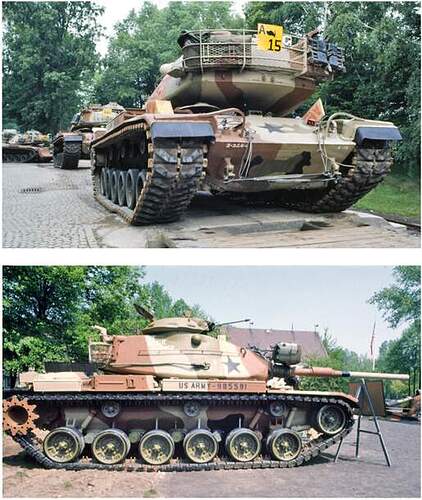 Interestingly, the tank in the bottom photo appears to have the post 1974 “cheek armor” on the front of the turret, as mentioned above.