The Second one I did in MASSTER

All three kits are essentially the same but for one item, the tracks. In the USMC kit and the MASSTER the kit tracks were actually made of rubber or at least something that was very close. They did not hold paint well although all that really needed to be painter were the end connectors. The bare rubber pads held pigments very nicely. In this kit the tracks were some type of vinyl similar to the newer Tamiya glueable tracks although these tracks are held together by a metal pin. I use Tamiya paints thinned with their lacquer thinner and the tracks hold paint very well, no flaking or peeling as so often is the case with rubberband type tracks.

I used a custom mix of green for the base color which was fairly dark, but when I painted the upper hull and turret I mistakenly used a lighter shade. What to do. What to do. I considered repainting it but decided to try to salvage what I had. Using the dark green mix that I had intended to use I applied several filter coats which darkened the overall look.

Next up ws the clear gloss, decals, and dark oil wash which I was counting on do darken the color even more. It did but I still wasn’t entirely happy. As a last resort I made up a filter of Tamiya smoke and applied it in several layers. The result is the color you see below. 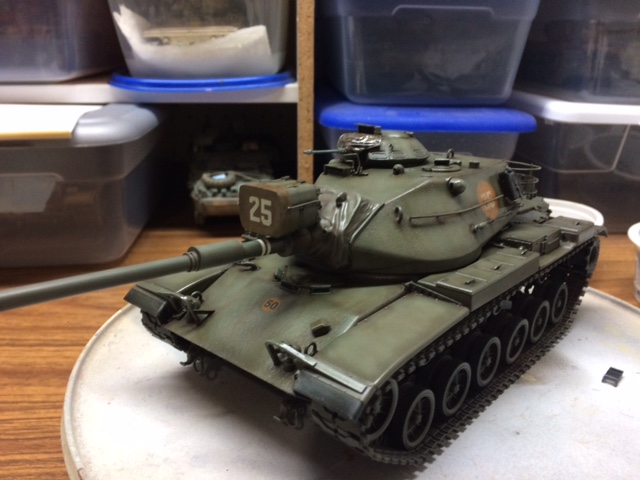 As you see it now it’s about 90% finished. It still needs to be sprayed with a matt finish and then some dusting etc. Photos aren’t great, taken with SWIMBO’s phone. 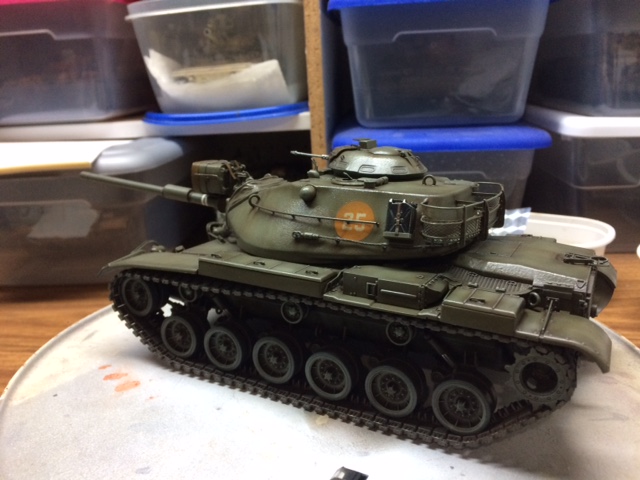 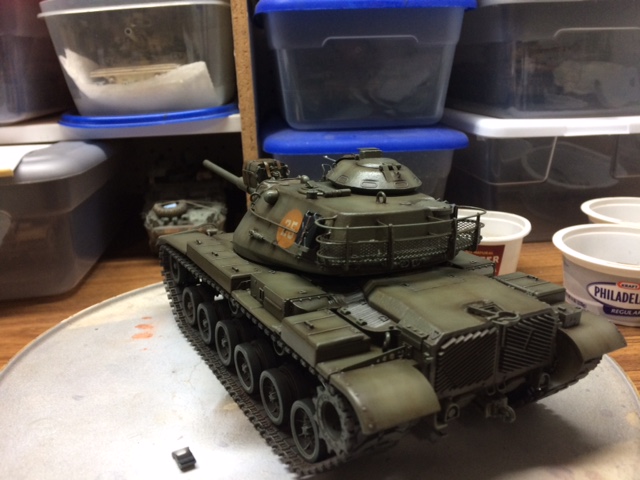 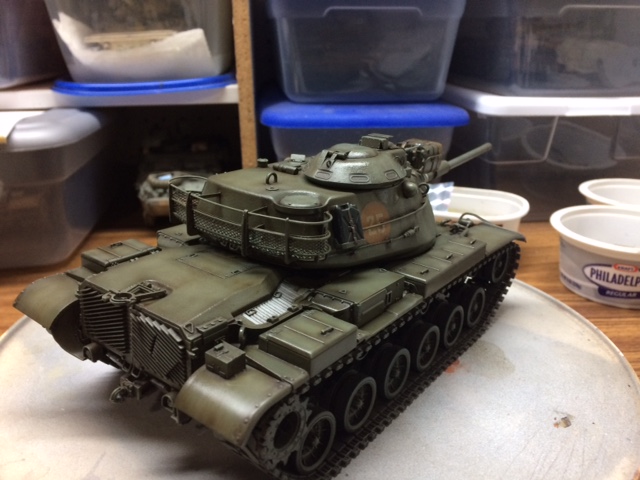 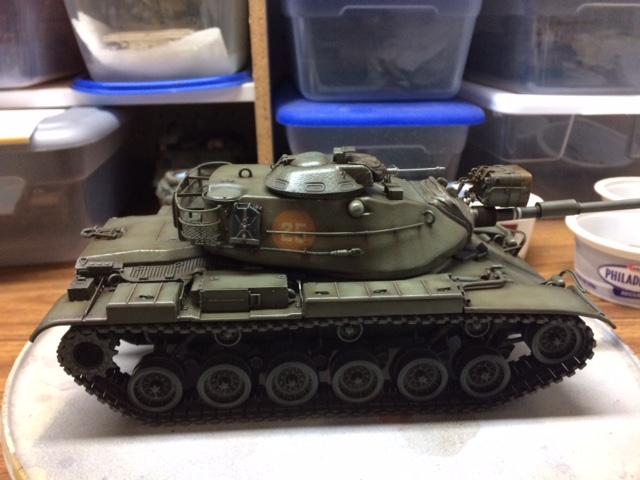 DV that’s impressive mono-green paint work! The shading rocks and it looks like it has depth! All looks very well executed! A++

With the Tamiya paints, what ratio of paint and thinner? Approximately air pressure?

Definitely filing away the “smoke filter” technique for future use.

I thin at about 70:30 thinner to paint using the yellow cap lacquer thinner. I say about because I don’t really measure but eyeball it and test the opacity to check the coverage. Probably spray about 10-12 psi. Again it can vary depending on on how much I thin. Then I spray in very light coats in a random pattern, sometimes using dots like you do.

I appreciate the info DV, I picked up a bottle of Tamiya Lacquer Thinner but haven’t tried to spray Tamiya paint with it yet.

I used to use their standard thinner but decided to try the lacquer thinner a few years back. I find it gives a much more smooth and even finish. You can also use Mr. Self Leveling Thinner which works just as well if not better but it’s nor readily available around me.

I haven’t sprayed Tamiya paint since probably the early 90’s with the X20A thinner. The paint always ended up with a pebble texture with the X20A, water was even worse. Looking forward to testing the lacquer thinner.

Does the paint bond about or better with the Tamiya lacquer thinner?

BTW - the Tamiya Airbrush cleaner is almost exactly the same as the extra thin cement. There’s like a very slight difference so the cleaner can be used like extra thin.

I don’t recall every having a pebble texture with the lacquer thinner. Never used the Tamiya AB cleaner. Thanks for the tip.

Well DV, you single handedly may have just expanded my 25+ years of Floquil Only Airbrush Universe to include a small sample of Tamiya.

The Tamiya X20A thinner has it’s place. Used it once to save a model that’s flat clear that developed an issue after getting soaking wet.

Been using Tamiya since it came to the US way bac in the 70s. Low odor, easy to clean up, readily available, and AB really well in my opinion. what’s not to like.

You’re gonna love it. There is no better way the thin the Tamiya Acrylic paints than with the Lacquer thinner. They spray 100% better, level better and have a bit more “bite” this way.

Thanks. MERDEC was my original intention so I guess I’ll have to build another.

Ones in the kit.

Finally got this finished. Added the stowage and dusted it up a bit. 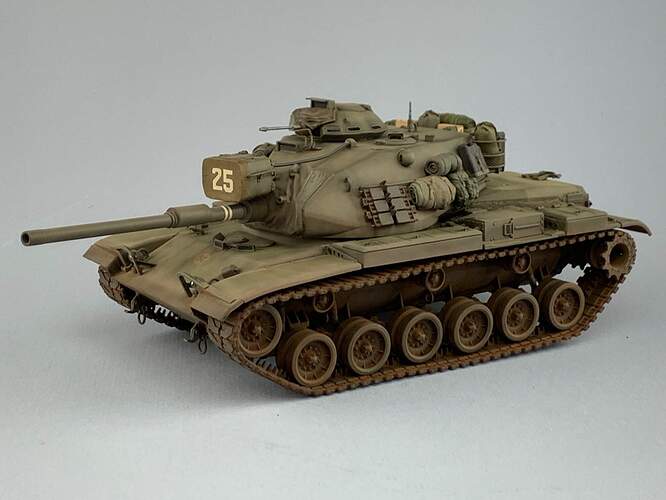 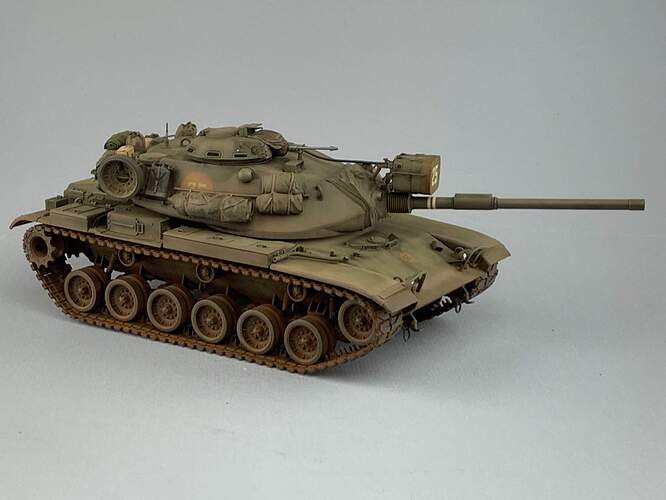 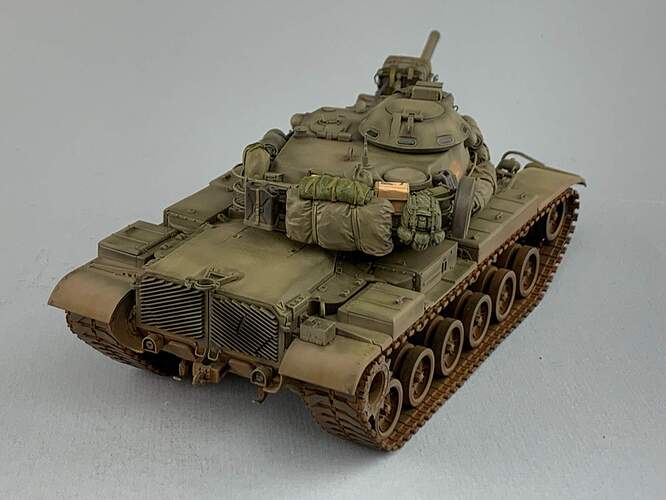 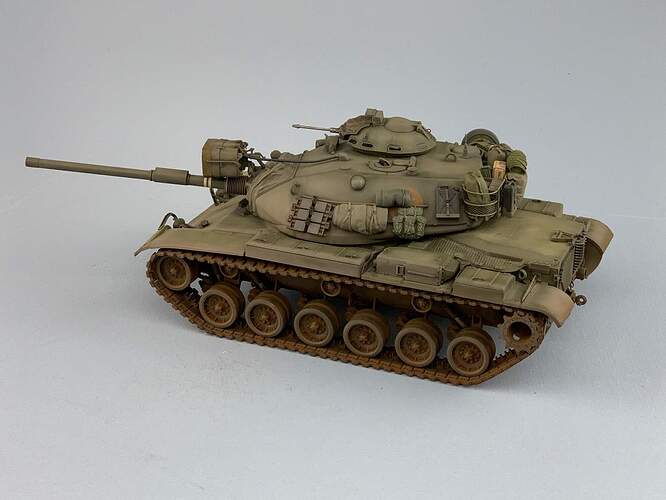 There’s a lot to really like about your M60A1!

Color, weathering and stowage all look great. Really makes me want to shift gears soon and do a Cold War or Modern AFV.

Veryyyy nice finish! I love the lightly used look you give all of your builds and this is no exception!

Excellent all around! What did you do to weather the tracks and running gear. Beautifully done