Brought to you by Border Models, and a Stuka Ju 87G pending. Something to put on that railway flat car, or trailer behind a Famo, if you so desire. 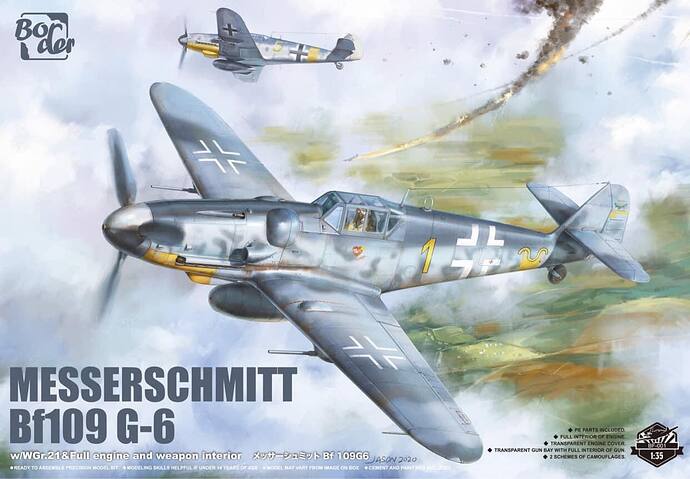 Any idea when the Stuka is released? May have to pick one up!

I’ll update as soon as I know; but yes, it is very tempting with those tank busting cannons out front.

I was about to get a Stuka G, love the look of them. Gonna wait for this release though!

Thanks, Kylie. Plenty of diorama options with these releases. Much welcome, as most of the aircrafts available in 1/35 are rotary-wing.

Seems like Border Models is at the top of the game and provides the type of kits this modeler really wants! If the 109 is as nice as the Pz IV kits this will prove a very popular 109.

This is great news. I’ll definitely be getting there. Not sure what air craft modellers will make of this.

Border Model are probably testing the water with these so if they sell well then we’ll see more.

Hope this is the start of a whole new series.

Very exciting news. I think I Have room for some select 1/32 scale aircraft.

IMHO, I really don’t think a new aircraft scale will be very relevant to A/C modelers, especially when it’s so close to the favored 1/32. I don’t see much of a cross-over with armor modelers, either, as there’s already 1/48 as a cross-over scale. I predict it will be a failed exercise as tooling, production, and marketing will be too costly to support what will become a VERY niche product.

Border is aggressive and innovative, I really wish them success with the 1/35 aircraft.

The Ju 87 Stuka is exciting, too. I see some great uses for both.

I do remember a long time ago, some company announced an Auntie Ju, a Ju 52 in 1/35. Maybe Border will realise that?

Personally I think they would have been better to release Liaison, recon, helos, and transport aircraft in 1/35th as they would fit better with vehicles and figures more so then fighters and bombers.
The aircraft market already has loads of figures in 1/32nd for pilots and mechanics. Its not often you see a 1/35th fighter pilot released!
As for having the aircraft on a transport, that would require the wings removing, and having to scratch build all the internal parts, as I very much doubt the kit would have the interior parts.
Andy

It’s not that I WANT this enterprise to fail, but what is it’s purpose? Is anyone really going to put a plane and a tank in the same dio? Do you realize that a single-seat fighter is MUCH bigger than even a Tiger ll? If you just want to build a large scale aircraft there are much better 1/32 scale ones, complete with available AM and alternate decals, etc. I can think of only one logical 1/35 aircraft kit - Bronco’s Horsa glider with associated paratroopers and jeep/trailer/AT gun kits. Impressive, but a VERY large dio base! With enough TLC most 1/48 armor kits can be as detailed as 1/35, and there are already plenty of excellent 1/48 AC.
Border is already pushing out a Stuka also in 1/35. I think they should have at least waited to see the reaction to the Me 109 to avoid making a big marketing error!

I may be a rarity in that I’ve mostly avoided aircraft models for 33 years because they aren’t in the same scale as my primary interest 1/35 armor & vehicles. I’ve done 150+ models in that time frame and less than 10 were aircraft for that reason.

It would also be nice to do a softskin in 1/35 like an Opel truck or kubelwagen near a 109.

I do agree, Border should have done one kit and tested the waters before committing to another 1/35 aircraft. Of course, Border is probably far more concerned about pleasing the Pacific Rim market than the US or European market with the release. I think the kit will do well in the Pacific Rim and less so in European market and be spurned in the US.

Actually, liaison AC (Feisler Storch; Piper Cub) are available in 1/35, and there are several 1/35 helicopters, from WWll era to present, available.

The Feisler Storch is pretty old tool, so a new one would be welcome. The Piper Cub is newish being tooled in 2007.
Now transport aircraft are very few even in 1/32nd, but they would be quite large.
Andy

Tristar Feisler Storch was released in 2011…is that old tool already?

what is it’s purpose?

I think the main purpose is to attract 1/35 scale armor modelers to build wingy-things that scale-wise match the rest of their collection with the added benefit of being able to display them together in the same diorama.