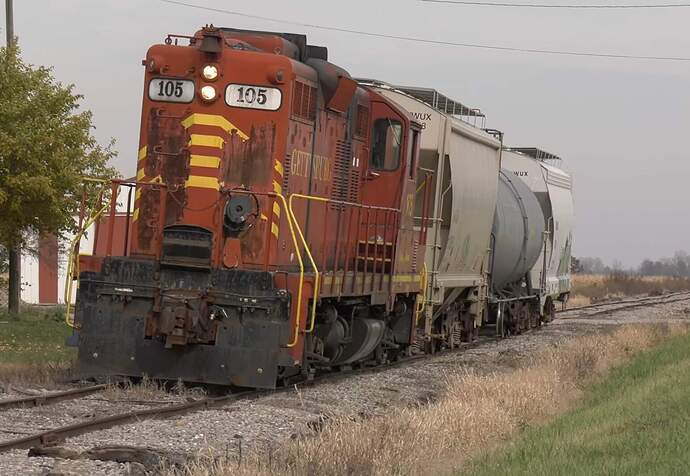 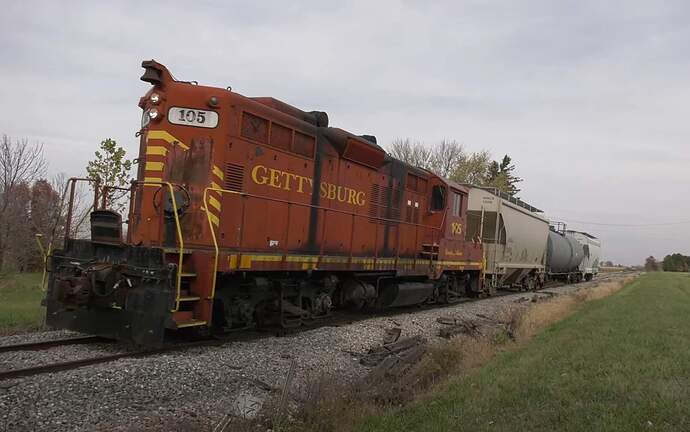 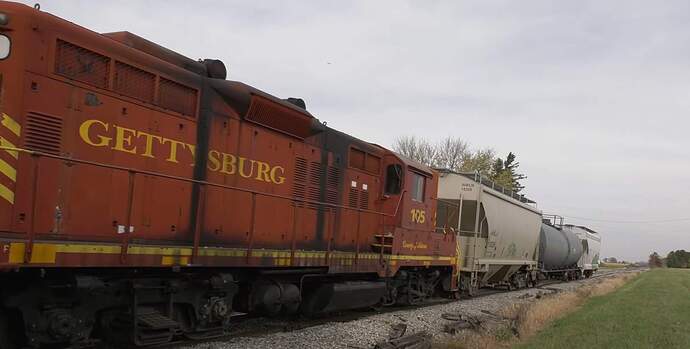 I’m not familiar with Model R&R but this beat up weathered old engine seems like it would be a fantastic weathering project.

Seems perfect for shaders, pigments & pastels. Kicking around Scott Taipale’s YouTube channel, this one is amazing

Several of those remote short line tracks look pretty scary to drive/pilot a train over.

My favorite loco configuration of all time! High short hood GP9 running long hood first.
The proportions are very aesthetically pleasing.
That said, I still want to model this particular one even though it’s not a high short hood. It’s from one of my many visits to Ft. McCoy. 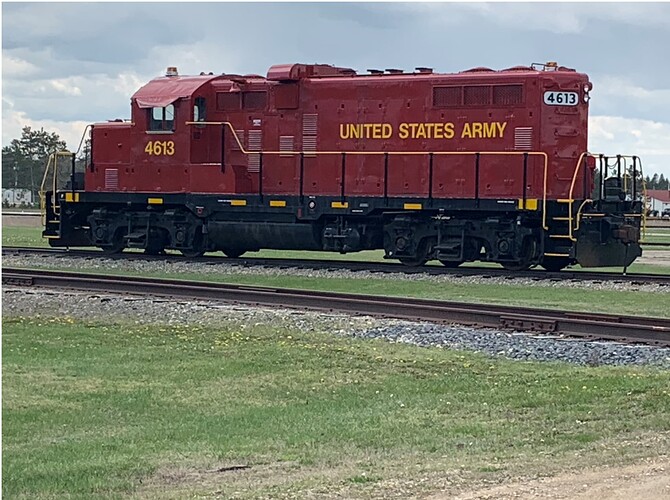 I’ve got several undecorated Athearn units from WAY back in the day. Biggest thing you have to do is round the top of the fuel tank with a file on each side and add details.

Always loved the GPs too, also the Fairbanks-Morse switchers. I was amazed at their size and power and noise they made. The railroad I work for, LIRR, had the GP-38s (-2s??) until about two years after I hired on in ‘97. I saw a pic 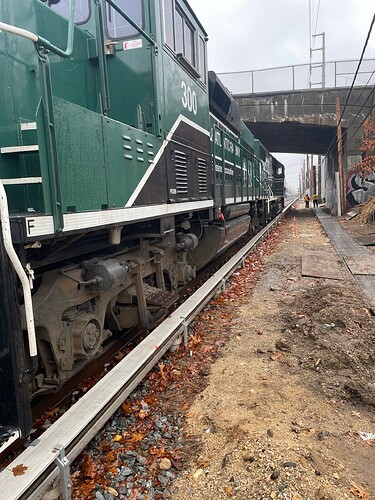 image1920×2560 718 KB
online of a GP-38 pulling some passenger cars on the Oyster Bay branch dated ‘99. We either sold them or leased them to the then brand new New York and Atlantic Railroad based in Glendale Queens. 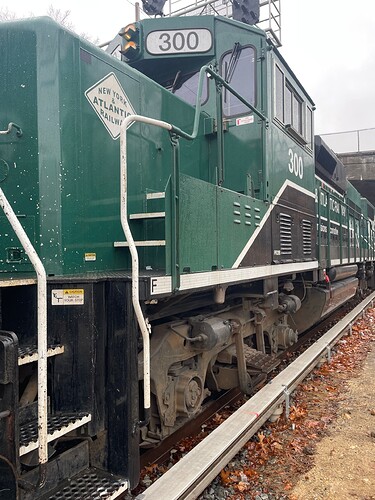 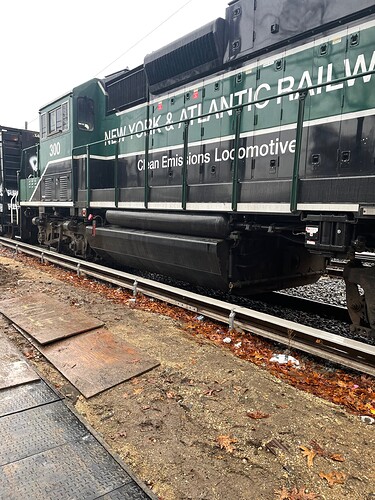 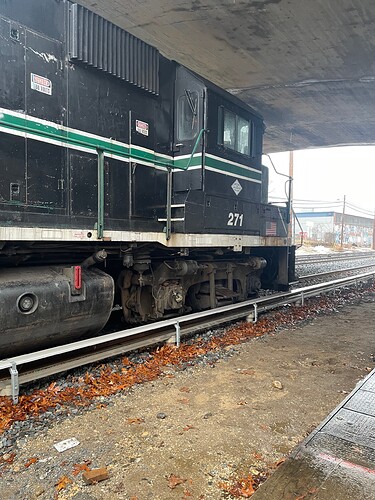 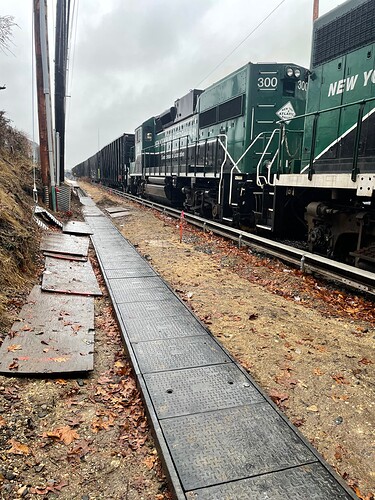 image1920×2560 902 KB
Not sure what this engines previous roster number on the LIRR was but they did a great job with the new livery, the other engine in the pic needs some work but they look worlds better than ours ever did. This short freight sits on the north track in Divide 1 interlocking in Hicksville under the Wantagh parkway bridge. I took this pic Friday afternoon while flagging at that location.
3 Likes
Armor_Buff February 6, 2022, 12:40am #4

Wow, those are sharp looking engines! Fabulous photos! Thank you for sharing.

Sorry about the cut off sentence; I was saying how I quit model railroading a long time ago. Just didn’t have the time or money to do both railroading and armor modeling. Still have about 20-30 engines and maybe 40 pieces of rolling stock.
Here is my lay out table now lol…… 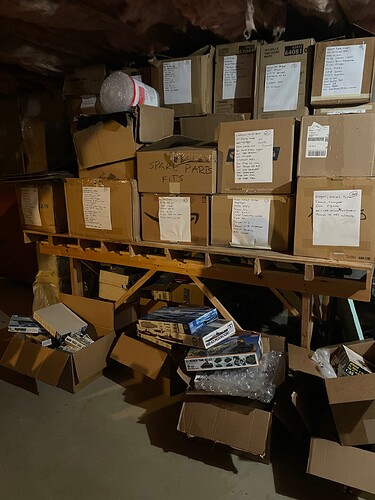 Hi Richard, hold on to that train collection! Mine is also in storage and has even crossed the Atlantic waiting for a new layout.

Those GP38-2s were purchased new in the 1970s, and I remember them mostly in the “blue wave” Gabreski scheme. I was saddened when they started repainting into the blue/yellow scheme in the 2000s, but eventually it grew on me. I’ve modified a few Athearn locos and painted them up - the wave scheme is a real pain to mask! The NYA took on some of them and their original green scheme is actually quite nice. IIRC Athearn or Proto released some ready-painted models in NYA colours.

No problem. I see them everyday. They have to wait in sidings for the rush hour to finish before they can come out and complete their runs.
Here’s another engine we use. It’s an MP -15AC I believe from EMD. 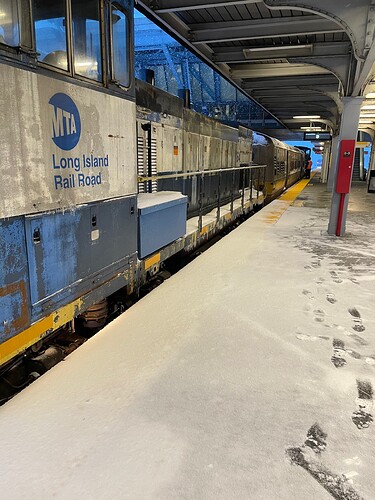 image1920×2560 536 KB
This one is being used as an alcohol train. There’s one engine on each end with an old M3 MU electric car in between. They take out all the passenger seats and install a spray system that sprays the third rail with an alcohol solution to keep it from freezing. They have 55 gallon drums of this stuff on board and it is usually crewed by two third rail guys. As for the train crew it’s usually one or two engineers, and one conductor and brakeman. I was the brakeman that day.

We use them for work trains, ie, pulling stone hoppers, gondolas etc. The LIRR has sadly dumbed things down over the years and designates them as E-15s, and the GP-38s as E-20, corresponding to their horsepower ratings. Sad lol.

I definitely will! Maybe when I retire I’ll set something up lol. I have a few LIRR engines and passenger cars.

Here’s another engine we use. It’s an MP -15AC I believe from EMD.

Wow that engine’s been hiding from the paintshop for quite some time! Good to see a “familiar face” from my youth on the Island…

Yes as I said in a earlier post, sadly the LIRR doesn’t give a hoot about the appearance of it diesels except for the DE30s that haul passengers. They repainted a few here and there but some of them already have it wearing off. 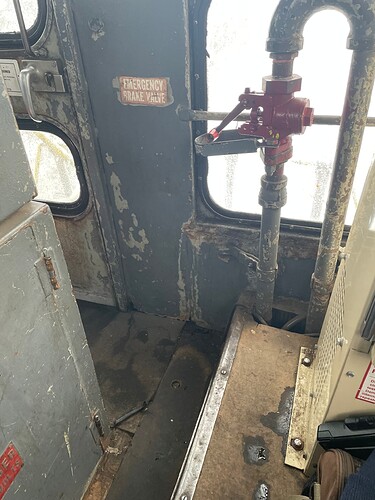 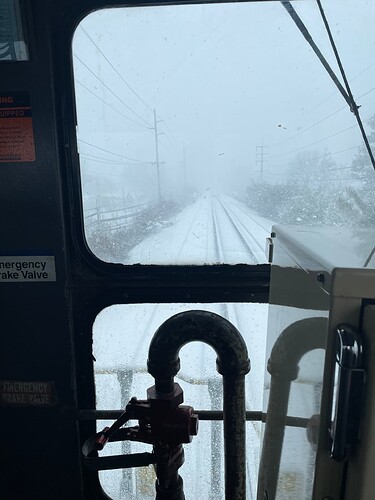 Mig & friends should be building and weathering

trains. It seems their favorite techniques are nearly ideal for well weathered trains.

It seems their favorite techniques are nearly ideal for well weathered trains.

Indeed. Even if those techniques have been around at least half a century. This SCL locomotive was one of the first two I ever bought. Must have been around 1974-5. It’s an Atlas - still one of the best running locomotives after all these years. You can see from the worm paint on the fuel tank it’s seen its share of track time. It’s an SD as you can tell by the six wheeled trucks.
The two coal cars are modeled on a couple that were parked on a siding about a half mile from my house in Crystal River, Fla. I used actual coal I picked up off the tracks for the loads.
Also my first attempt at decaling. The cars are cheap ass TYCO cars. Added the KD’s myself.
You can see where some of the chipping was painted on, and some where the rust was applied first, then the black was removed. Not bad for a thirteen year old I guess. That’s the reason I could never bring myself to improve them over the years. 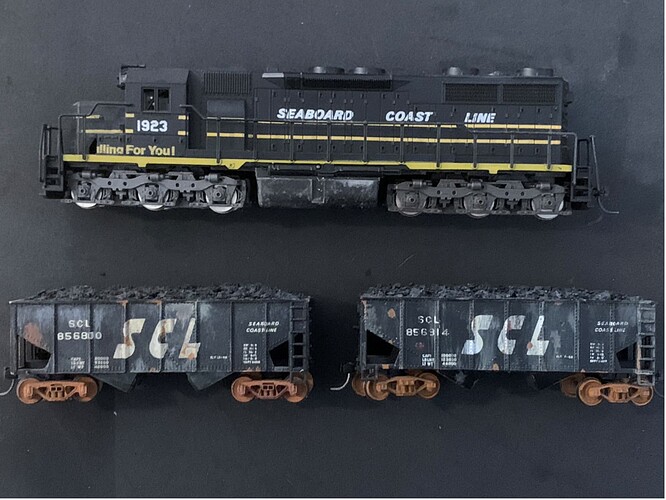 image1704×1279 172 KB
This Santa Fe unit is also from that time. I repainted it around 1991. The Livery was wearing off from so much handling, although the original paint job never was that good, and the yellow was a little too orange for my taste.

image1702×770 121 KB
I even took time to drill out the holes and add the ladders. Although I never actually finished it, it saw quite a bit of track time as well. Love that high short hood! 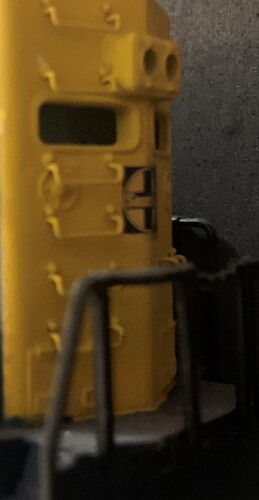 I used to buy quite a few undecorated units, paint and decal them as per requests, and sell them. Of course that was for oddball liveries that didn’t come painted. This one I did for myself to run along with the SCL loco - Florida East Coast.

Of course when I moved to Texas there was MKT to run along with my Santa Fes and Union Pacifics. And back then (circa 1990) it wasn’t offered so I had to make my own. Even had to mix that shade of green. These days you can purchase MKT’s off the shelf.

Love that real coal! I inherited two old gondolas from my brother that had real “rock” loads from gravel found in the street - they weigh a ton! Needless to say they don’t operate, but I won’t modify them. I have other “sentimental” units in the collection that are staying as they are - if I feel the urge for a repaint I can always pick up a new used car from elsewhere to paint.

No. 300 & 301 are listed as Progress Rail Services Corporation PR22B locos. I think PRS rebuilds other brand’s locos and updates them.
http://www.rrpicturearchives.net/locoPicture.aspx?id=236117

BTW, RR Pix Archives is a great resource but their site is sssssllllllloooooooooowwwwwww.

@18bravo those all look fantastic to me.

I had a small box set with an engine and a few cars as a kid. Pretty cool in the mid 1970’s but learned very quickly that was a stater set. Had a lighted Santa Fe engine red & silver. 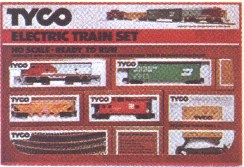 Train was very unpopular with our cat

. However, later on she really like slot cars - put more cars into the wall for sheer fun than NASCAR royalty. Race was usually decided by who could get past the cat.

TYCO: still brings good memories. I have a couple of their items like the dumping hopper and the boxcar that unloads boxes. Duuno if it works.

Wow great pics! I was gonna ask where you got them from.

I remember the tyco stuff yes.