I’ve been sitting on this one for a while now. It’s a build using parts from the following kits:

Originally; the kit was going to be for me to practice painting camouflage patterns; so I built the turret to practice thf old MERDC “Winter Verdant” pattern common to armored vehicles stationed in Europe during the Cold War era.

Eventually, I decided to fully build it as an A3 TTS assigned to the 11th ACR “Blackhorse”. 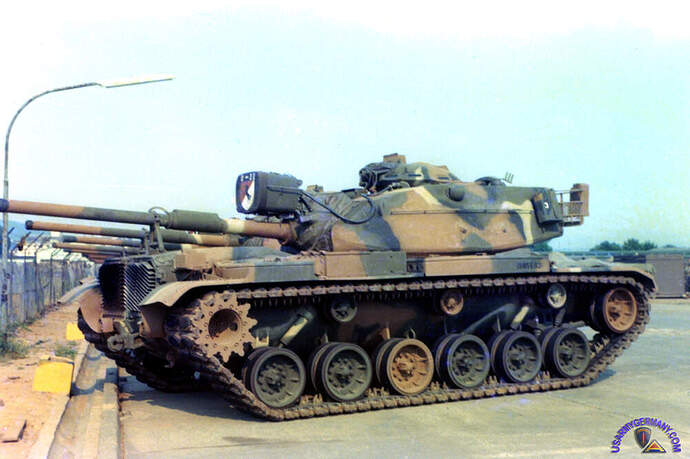 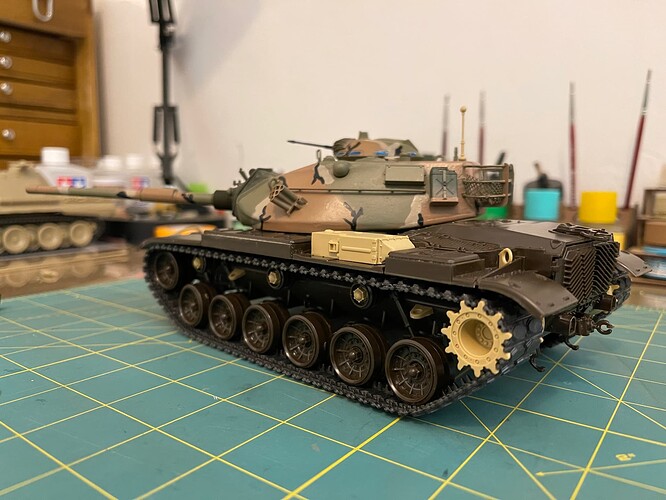 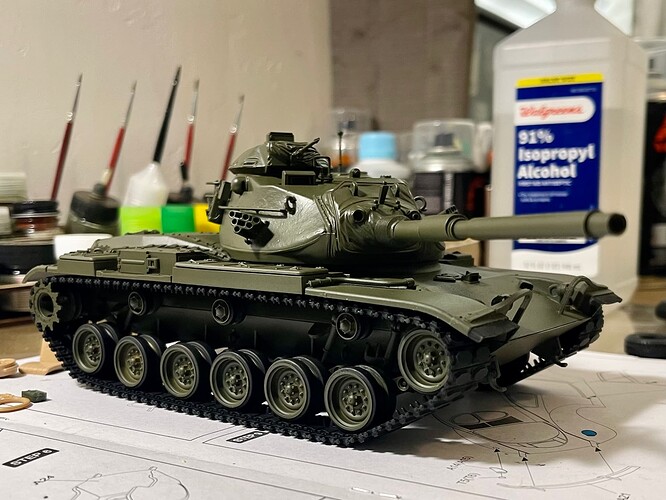 The hull is from the original 1970s kit, while the turret and elements in the hull are from the 1992 kit and the road wheels are from the Magach kit.

Fully painted in Tamiya TS-5 OD Green and will finish the MERDC camo with Tamiya acrylics.

Like what youve done. What types of issues did you run into if any

Looking good so far. One minor issue though, the M60A3 TTS had top-loading air cleaners (as your 11ACR example has), not the older side-loading ones.

The main issue I’ve found is that all the kits are old, so have accuracy problems, The lower hull is a motorized hull (as with many of the older Tamiya kits); so, there are holes that have to be plugged up. Also, the original kit came with plastic rods for the front drive roadwheels, so i had to cut a section of aluminum rod, similar to the 1992 kit, to prevent the front two roadwheels from bowing under the tension of the tracks. Another feature that’s not on the Tamiya kits it’s the skirt extension that goes behind the drive sprockets and to the bottom of the tail-lights. Academy added this on their Israeli Magach series of kits and I simply added the parts. 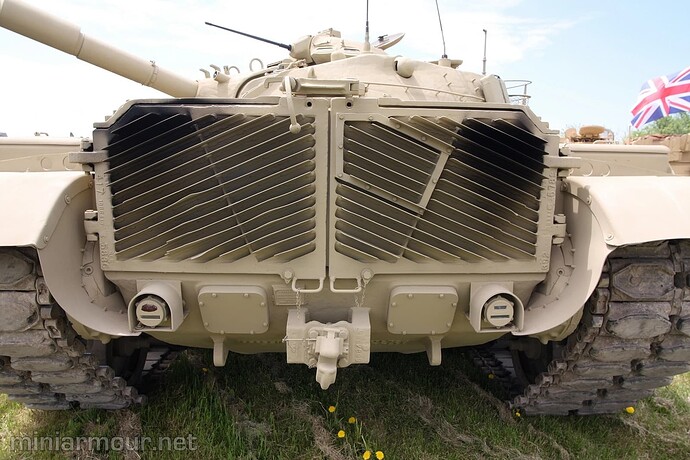 If you want to build an accurate rendition of the A3, go with either Takom or AFV Club. Like i stated; this kit is nothing more than a cobbling of multiple kits to make this one a decent rendition of an A3.

Darn! Well? I’m not going to bother with it. I guess it’ll be inaccurate in that aspect. Not worried too much about it. But thanks for the heads up. If I find the correct air filter boxes on my spares box, then, I’ll cut them off and install the correct ones.

Looking good Reynier; I realise you may not have gotten around to it yet but the light guards on the front headlights have a support brace - a T section piece of metal as it were. You can see it a little clearer on my ancient M60A1 (Esci) - on the left as you look at it - here: 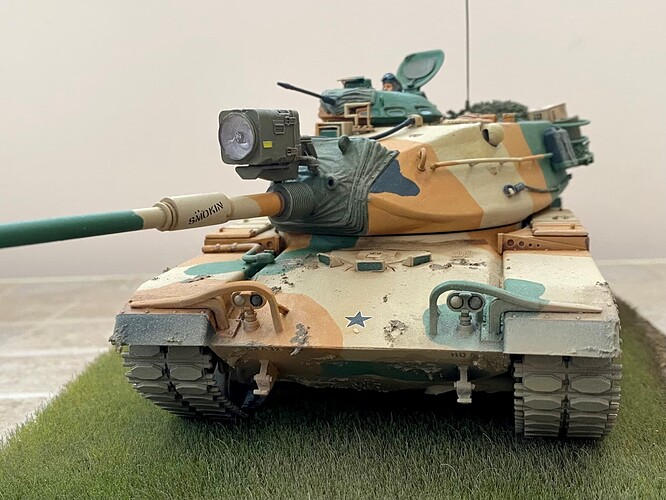 Good luck with it - I like the idea of getting the best from older kits - in fact my stash dictates just that!.

Yeah, i recently bought some strip styrene to build the storage racks on an M-113 Zelda I’m working on. I’ll add those braces when i get home. 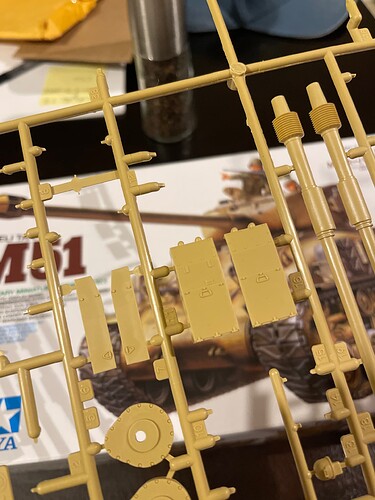 Ah ha! I have the proper filter boxes. 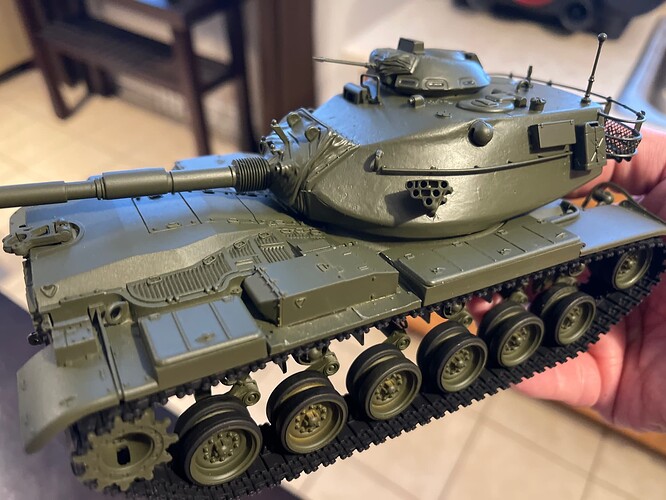 Ain’t she purty! Don’t know if you’re gonna have the AN/VSS light on your model or not but it definitely needs the 11ACR’s prancing pony somewhere. I’ve always loved the M60 series, it was a tanker’s tank in it’s time. Really nice job so far, almost hate to see it get dirtied up.

I have the spotlight, but don’t know how to attach it to the brackets on the mantlet. Also, the light didn’t come with the clear lense, so I’d need some advice on how to install it, I could just put a cover over the front and att the Pony insignia on the cover.

Most of the reference images I have are of tanks wothout the spot light. 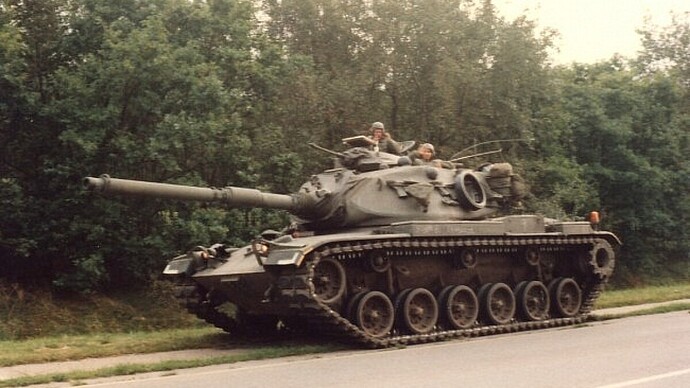 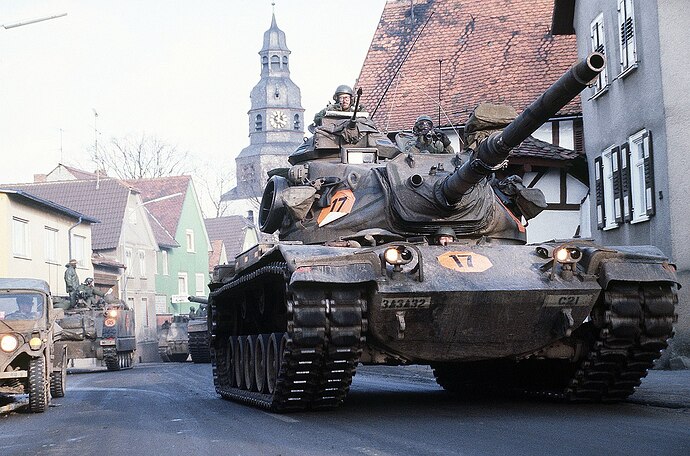 Oner thing you can be sure of; it WILL be wearing REFORGER markings; I got a choice between the Orange panel or the Blue panel. One thing i have yet tot ackle, will be the ID panel in the back of the bustle rack. 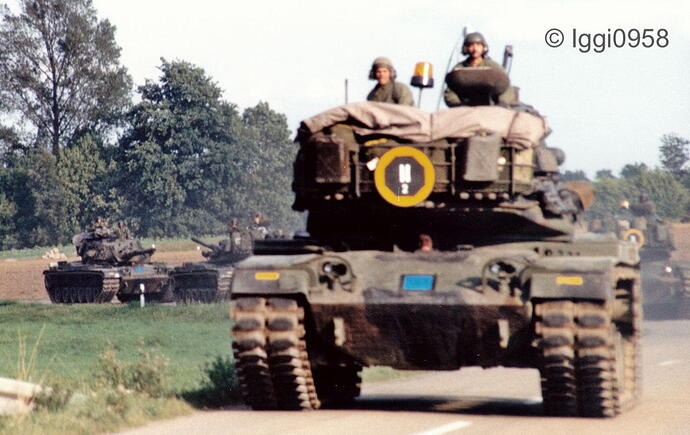 Love that paint finish Brian, but of course I would being MASSTER!

I have the spotlight, but don’t know how to attach it to the brackets on the mantlet.

There are three sockets on the light mount (red dots below). These are where the three balls on the posts on the mantlet go into. 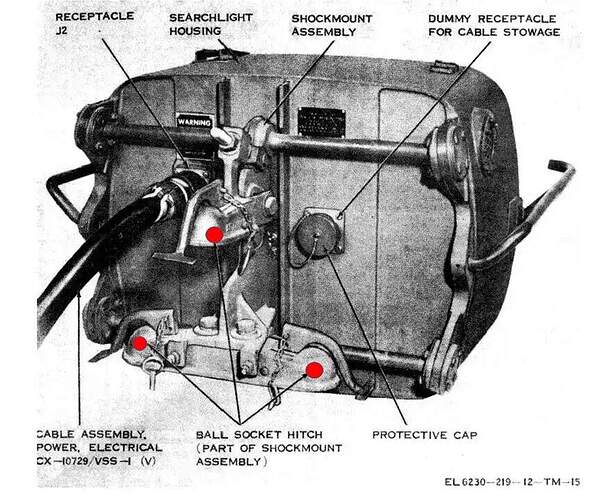 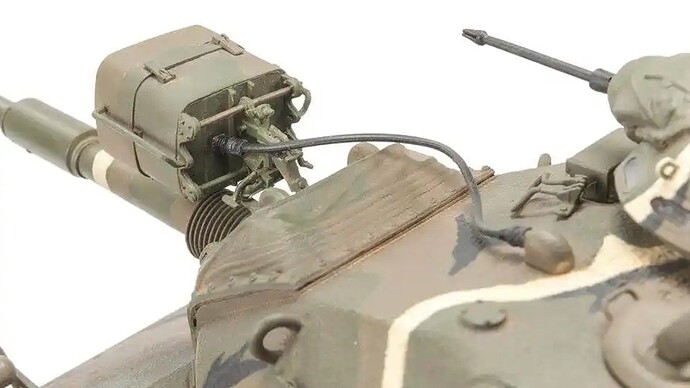 yeah; I would need a more detailed spotlight; the Tamiya one is sorely lacking in the detail department.

Er, I’m not that much of an M60A3 Ninja here but wasn’t this version mainly fittted with a newer searchlight? Not. I’m sure, that as with the introduction of any new kit, there isn’t a crossover of equipment actually in service.

Thanks Terry - taken from a coloured print which seemed to reflect a much earlier use of paints - possibly civilian in origin - before the more standardised - and somewhat less garish - colours came into service.

Yeah; the AN/VSS-1(V)1 IR searchlight; was the most common searchlight found on the M48/M60 series.

They did use the older lights. They could/did use the newer ones as well.

Most M60A3s did not use spot lights at all though as the TTS (Tank Thermal Sight) didn’t need either a visible nor IR light to “see” the battlefield.