So… I started building this back in August when I thought Chris Bryan’s campaign was going to start. And then poor Chris had life intervene and here we are in the reboot.

Base kit is the AFV Club Mk 5 w/ dozer. I’ve got a canvas mantlet cover as well. I’m still trying to decide if I spring for aftermarket tracks and I feel the answer to that question is going to be yes. 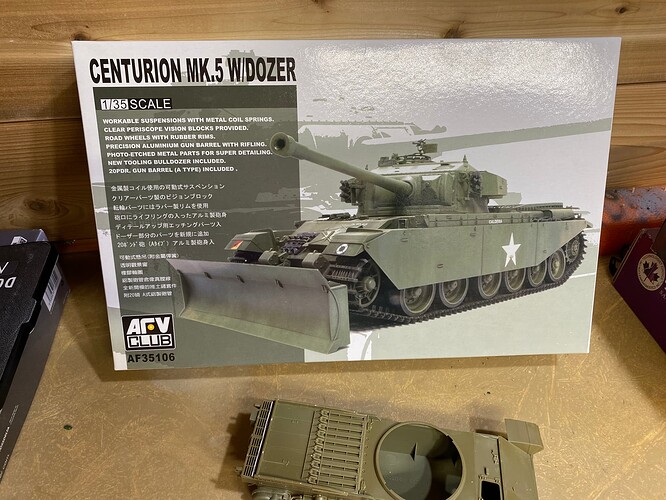 Here’s what I’ve got done so far in the lower hull. 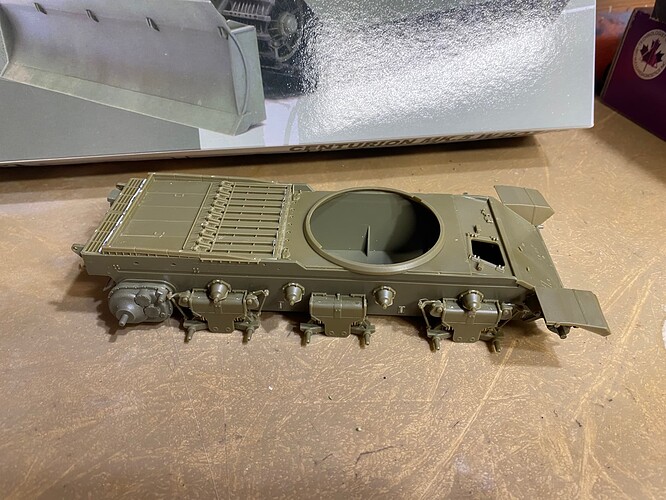 Here things shall remain for the time being. Reason: I can’t figure out what to build!

It’ll be Canadian Army obviously, but I’m torn between boring green, which would allow me to use a great many of the kit decals 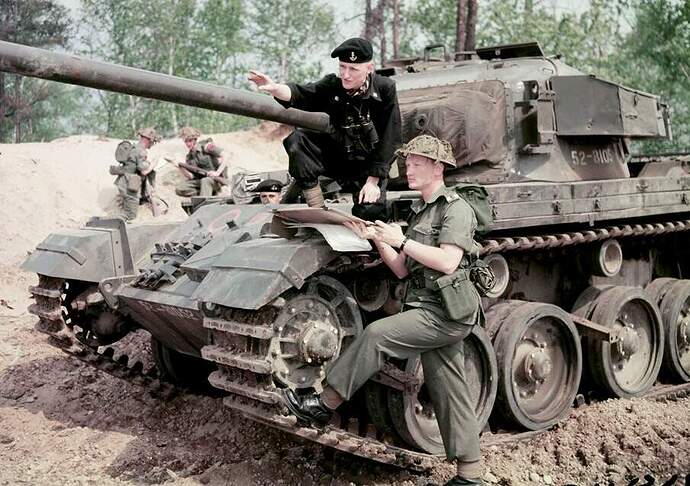 or fun camo of which I can’t find verifiable proof of it existing in real life. 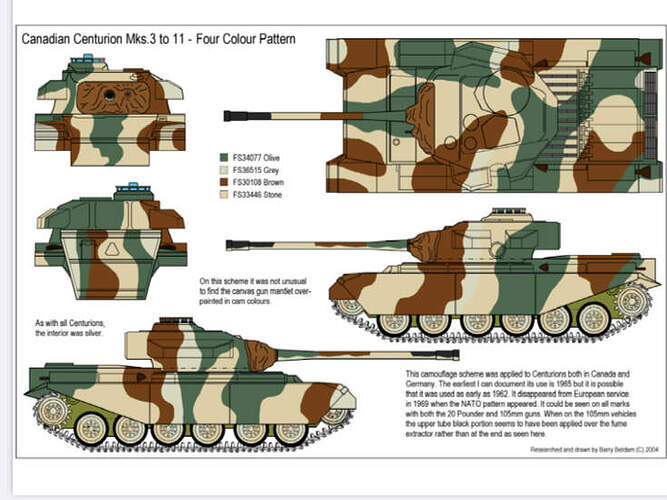 I need to invest in some reference material which I have located, but if I bring another package into this house before 2022 my wife will scalp me.

If it’s from Armoured Acorn, there’s a strong possibility it existed! The camo would look pretty dope.

Yeah, I’ve seen some B&W shots that might match, and Barry is a reliable source, but I’d really like to see one in the wild. Mostly for markings which are lacking from that colour plate. I’m gonna bite the bullet and get the Centurion CD from Trackjam next time I make an order.

Wow - looks like WW2 German camo from a set of Tamiya instructions circa 1980! If it’s real then you gotta do it. (Reminds me of the camo on Bovington’s Porsche KT up until a couple years ago - also inspired by the folks at Tamiya, after whom their main tank hall is named.)

I need to invest in some reference material which I have located, but if I bring another package into this house before 2022 my wife will scalp me.

I understand having/had the same issue. 2nd to last package she knows about was aftermarket items and when she said is that a model, I said no it’s aftermarket parts to finish my an existing kits. The last package was books from David Doyle which weighed a bunch so she knew it was not a model. Maybe just ordering reference material only might help. You can say it’s a Xmas from her and you appreciate her knowing what you wanted. Best of luck.

Step 2: buy all the hobby supplies you want, if she kicks you out of bed… see step 1

I have two comfy couches!

It’s only because it’s Christmas. Jan 1 all bets are off and we’re back to our regularly scheduled addiction.

I am actually lucky, not only does my wife not care about what I spend on this stuff (too a point), she actively encourages me to get/work on things.

Same here, I’m lucky that way. She rolls her eyes when a new kit shows up, but she never gets seriously upset.

She does ask why I need another, but she doesn’t get that sometimes you gotta buy jt when you see it or you may not get another chance

Informal poll @Canmedic and @Mead93, what would you say stash kit count is at? Ballpark numbers are fine, not looking for Exhibit A your honor numbers.

I plead the fifth.

Mine is quite small, maybe 25 kits plus 4ish I’m expecting for Christmas. But I’ve purposely held back a bit as I’m moving in January. Once I get to the Texas I plan to start taking advantage of those sweet sprue bros deals!

Oh buddy, well under the average. I think I’m at a whole 10 kits!

I have never been a stash kind of builder though. If I stash I won’t build so everything in the closet right now has a plan and a time frame. I’ve even got a whiteboard to keep me on task

Makes sense, mine is over the spousal support limit. Don’t know what the limit is for my house but I have long pasted it. I am at about 1/2 of 4 digits. 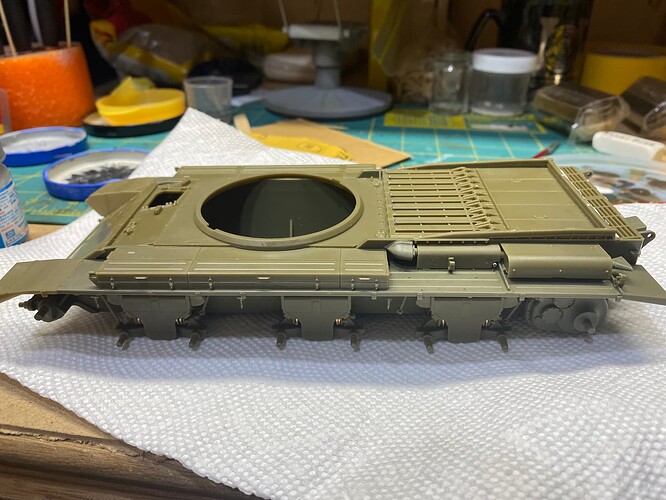 Also got the basic assembly of the turret done. The seam around the top might get some more attention depending on how the stowage bins cover it. 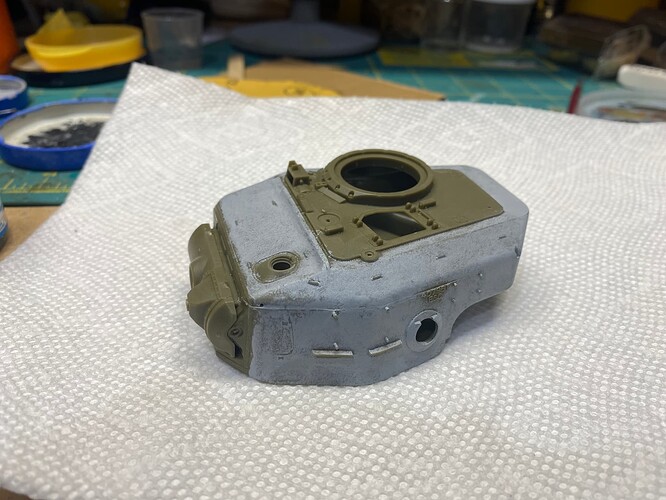 I am however having some fit issues with the AFV Club “canvas” mantlet cover. I bought the Type B cover which should be appropriate for this tank, but it seems undersized and just won’t align nicely with the rest of the mantlet. Anyone have any experience or insight? 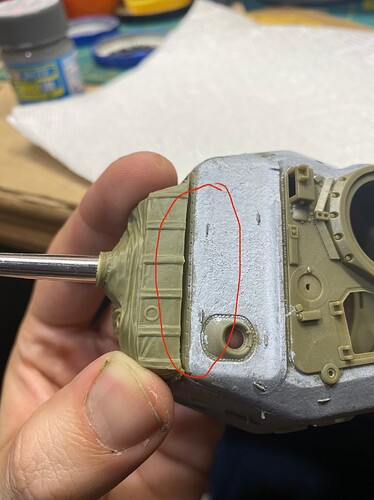 It’s almost as if it isn’t meant to accommodate the bulge for the coax mount.

Edit: Answered my own question PMM to the rescue!. Looks like I have some minor surgery ahead of me.

I encountered the same problem with the AFV Club Vinyl Mantlets - they’re just don’t fit well. Below is my Amusing Hobby Centurion which is similar to the afv club kit - I ended up removing the co-ax bugle on the turret and stretching the mantlet as far as it can before applying super glue - even then it still didn’t reach all the way to the attachment points. I ended up using a bit of two piece putty + some stretched sprue for bolts to replicate the attachment point. 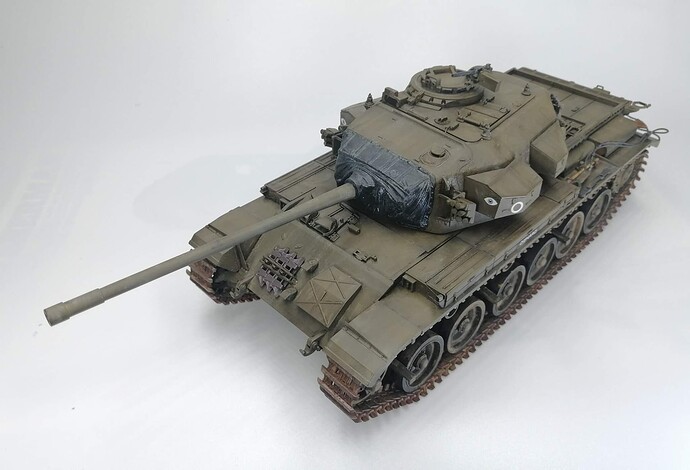 Hey Don I recall seeing a Canadian Centurion model done in that camo pattern on the old Armorama site. I think it was done by Jason Babrowic ; sorry I can’t remember the correct spelling of his last name. It was several years ago but if came out awesome.

You’re probably thinking of @Jason_Bobrowich who’s a former Leo commander. (Jason I don’t want to date you unnecessarily and put you in the turret of a Cent too

That particular machine is in the Field Grey/Olive/Black scheme typical of mid/late Cold War Canadian equipment but is magnificent none the less.

I think this experimental pattern looks like it’s going to be much closer to this: 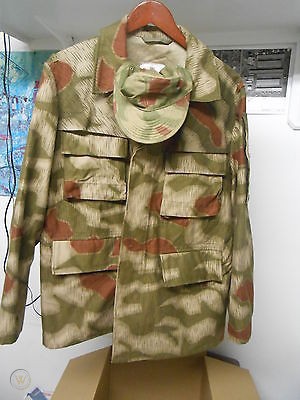 That looks like the German marsh pattern no ? Cool

Yeah, it’s actually a Bundesgrenzshuts (West German Border Guard) jacket. The patterns were very similar though. That image is just lifted from the net, though I had a surplus one years ago.

Yeah that’s him Don. The model was wearing the pattern you showed in the color plate. I have to look through my magazines maybe it’s there. I swear it was on Armorama though. I remember asking Jason about the light gray color because it was difficult to pick up in the photos. I’d love to do one of those Cents. 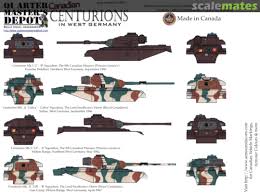